Advances in Immunotherapy for Pancreatic Cancer: 2013

Pancreatic cancer is one of the more difficult malignancies to treat, and there is a great need for less toxic, effective regimens. Immunotherapy has shown potential in the treatment of pancreatic cancer, and at ASCO 2013 there were several progressive advances in its clinical application. Abstracts #3067, #3049, #3007, #4040, #LBA4004, and #3090 will be discussed. New developments in the field of immunotherapy are promising novel treatments for pancreatic neoplasms with tolerable side effect profiles.

Pancreatic cancer remains the fourth leading cause of cancer related deaths in the USA, with 45,220 estimated new cases in 2013 and 38,460 deaths [1]. The 5-year survival remains less than 5% for patients with metastatic pancreatic adenocarcinoma [2]. Unfortunately, the majority of pancreatic cancers are diagnosed when the disease is already metastatic or locally invasive. Metastatic pancreatic cancer has a survival of less than 20% at one year. While surgical resection and chemotherapy improve survival in early stage disease, post-resection survival at 5 years remains 15-20% [3]. The few chemotherapeutic agents that have shown efficacy in the treatment of pancreatic cancer include gemcitabine and FOLFIRINOX (a combination of 5-fluorouracil, leucovorin, oxaliplatin, and irinotecan) [4, 5]. Chemoradiation has a modest benefit in unresectable disease that is locally advanced. However, despite many advances the survival for patients with pancreatic cancer remains poor. Frequently, diagnosis is made at a late stage, which makes interventions difficult; therefore, we are in dire need of better options for these patients.

Immunotherapy offers a novel approach that has the potential to function alone or in concert with traditional therapies. Recently, multiple modalities have been shown to improve survival without adding toxicity. Examples of the different vaccines that have been in development for pancreatic cancer are demonstrated in Table 1, the most advanced of which being algenpantucel-L. 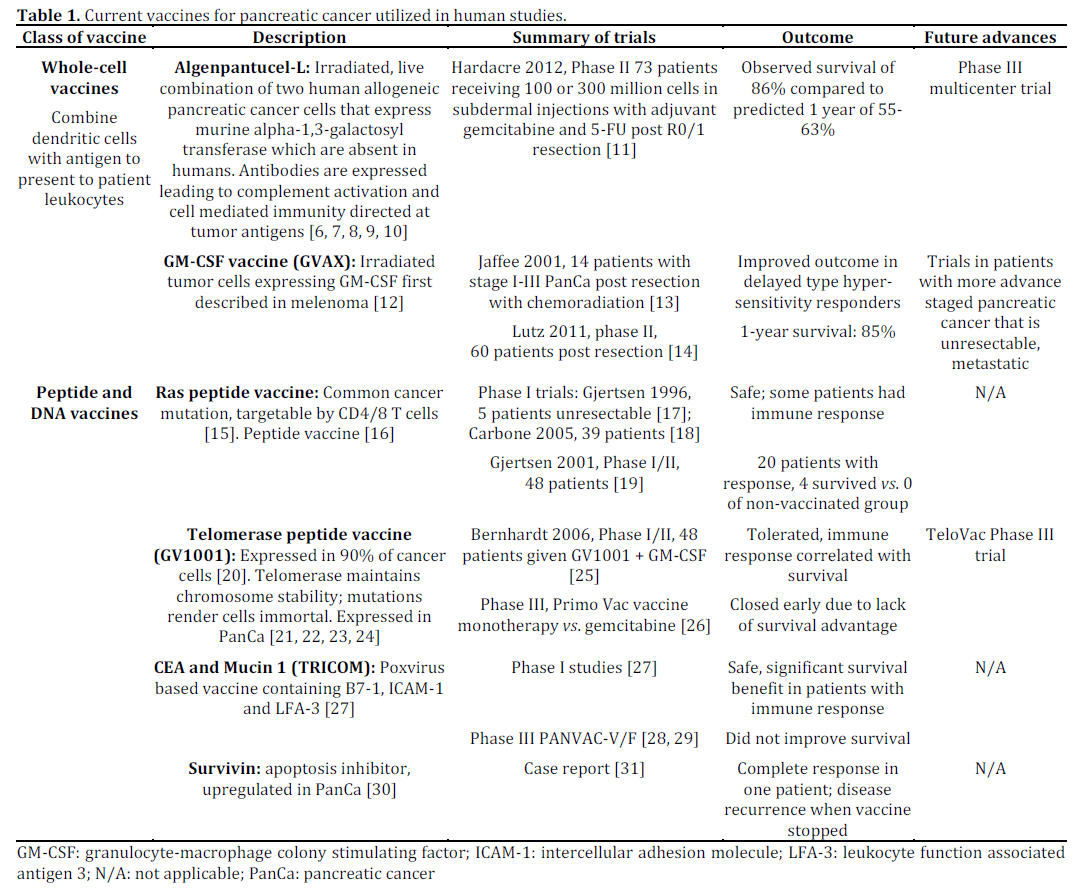 In addition to the aforementioned methods, there has been an interest in antigen-pulsed dendritic cells. Dendritic cells are the most capable antigen presenting cell of priming naive T cells, stimulating memory T cells to upregulate an antigen specific response. When dendritic cell based immunotherapy with gemcitabine was given to 49 patients with late stage pancreatic adenocarcinoma in a phase I trial, with or without lymphokine activated killer (LAK) therapy, patients with receiving LAK along with chemotherapy and antigen pulsed dendritic cells had prolonged survival. This therapy was also deemed to be safe [32]. Antigen targets like CEA [33] and mucin 1 [34, 35, 36] are safe by phase I investigation, but have not gone beyond this stage. Lastly, heat shock protein (HSP), an intracellular peptide chaperone induced by stress has also been a target of immunotherapy. HSPPC-96 is an autologous HSPbased vaccine produced from resected tumor tissue, and has been shown to induce immune response [37]. A phase I study determined its safety [38]. Both of these methods require further studies to determine their clinical efficacy.

What Have We Learnt from the 2013 American Society of Clinical Oncology (ASCO) Annual Meeting?

At this year’s ASCO Annual Meeting, we can see that there is an exponentially expanding interest in the field of immunotherapy, especially directed at pancreatic adenocarcinoma. A basic overview of the abstracts presented is listed in Table 2. Particular abstracts will be examined in detail, with future directions as well as current clinical trials left for the discussion section.

The concept of adding the telomerase vaccine GV1001, targeting a class II (T helper) epitope expressed in 90% of pancreatic cancers, with gemcitabine, was based off the perception that gemcitabine has been shown in pre-clinical studies to increase antigen cross-presentation, enhance T cell activation and tumor-infiltrating lymphocytes as well as reduce myeloid-derived suppressor cells and T regulatory cells [44, 45, 46, 47]. Onethousand and 110 patients with advanced pancreatic cancer were randomized to three arms: Arm 1: receiving gemcitabine and capecitabine (GemCap); Arm 2: receiving GemCap followed by GV1001 and additional GemCap; and Arm 3: concurrent GemCap and GV1001. Response rates were 17.6%, 8.9% and 15.5% in Arm 1, Arm 2, and Arm 3, respectively. It was then concluded that overall survival with concurrent GemCap and GV1001 was not improved over GemCap alone, and sequential administration of GV1001 with GemCap before and after (if tolerated by patients) did not demonstrate significantly improved survival either. The addition of GV1001 to GemCap did not improve outcome of the patients in this large clinical trial.

CRS-207 is a live-attenuated Listeria monocytogenes engineered to express human mesothelin shown to be safe in a phase I trial.

Additionally, using both GVAX and CRS-207 has shown synergy in mouse models [48, 49]. Prior studies showed that GVAX with cyclophosphamide (CY/GVAX) induced mesothelin-specific T cell responses improved survival in patients with metastatic pancreatic cancer [14]. This study also cites a phase I trial that demonstrated anecdotal survival difference in CRS-207 with patients who had received GVAX [49]. Ninety patients were treated with either: Arm A: 2 doses of CY/GVAX followed by 4 doses of CRS-207; or Arm B: 6 doses of CY/GVAX every 3 weeks. No serious adverse events were observed, though grade 3/4 fever, lymphopenia, hypophosphatemia, elevated liver enzymes and fatigue were seen in less than 5% of subjects receiving CRS-207. Fifty-one patients of the original 90 were evaluated post-treatment; 34% had stable disease in Arm A compared to 19% in Arm B. Overall survival was 6 months in Arm A while 3.4 months in Arm B. This lead to the conclusion that CY/GVAX with CRS-207 was not only well tolerated, but the observed overall survival difference was significant enough to lead to early stopping of the trial.

This study compared both the clinical response and immunological response of 36 patients with stage IV pancreatic cancer receiving dendritic cell vaccines with or without recombinant adenovirusp53 (rAd-p53). The investigators measured the expression of CD31, CD41, and CD41/CD81 ratio in peripheral blood, which all increased in both groups, while a decrease in T regulatory cells was observed. Clinical response was significant, as patients receiving rAd-p53 had a disease control rate of 45% (compared to 37.5% in those not receiving rAd-p53), a 6-month overall survival of 50% (compared to 43.8%) and median survival of 6.8 months as opposed to 5.5 months. Only mild to medium grade fever was observed, and no serious adverse events occurred. This study concluded that dendritic cell-based immunotherapy was safe, and that the combination with rAd-p53 was beneficial to survival and disease control.

Using the algenpantucel-L in a multicenter phase II study with gemcitabine, 5-fluorouracil and chemoradiotherapy (the standard of care) in 64 patients with resected pancreatic cancer, the authors measured the clinical response as well as IgG, complement, CA 19-9, anti-aGal antibody, anti- CEA antibody and most importantly, antimembrane- bound recombinant mesothelin (MSLN) antibody. Disease free survival was 62% with a 12- month overall survival of 86% in the setting of a 3- year follow up. Overall survival at 3 years was 39% while disease free survival was 26%. Thirty-one percent of patients had increased anti-MSLN antibody and notably had a median overall survival of 42 months compared to 20 months in those who did not seroconvert.

Pancreatic cancer is an exceedingly difficult disease to treat, with recent advances only showing a modest survival benefit. There is a great need for novel therapies, preferably those with favorable side effect profiles. Immunotherapy is an everexpanding field offering a multitude of targeted agents that show promise in the treatment of solid tumors, including pancreatic neoplasms. There is yet to be an FDA approved vaccine for pancreatic cancer. We have seen some major progressions in the field of cancer immunotherapy, as exemplified in the abstracts presented at the 2013 ASCO Annual Meeting.

Overall survival is the ultimate outcome measure for immunotherapy in pancreatic cancer, especially given the dismal prognosis in advance diseases. However, it is important to assess immune response to correlate to clinical benefit, as seen in the Rossi study presented as ASCO regarding anti- MSLN antibody seroconversion in patients given the algenpantucel-L vaccine. The identification of these targets is critical to developing new therapies and monitoring immune activation. Pancreatic cancer antigens that have been identified include aGal epitopes, mesothelin, VEGFR, telomerase and the addition of XBP1 at ASCO2013.

The immune response to cancer in general is clearly blunted by the downregulation of T, B and NK cell response from T regulatory cells and MDSCs. A recurring theme in these abstracts is the addition of chemotherapy with vaccines, which although seemingly counterintuitive as chemotherapy is generally thought of as immunosuppressant; this is not the case. Multiple chemotherapeutic agents have been shown to expose intracellular tumor antigens resulting in improved antigen-specific CD8+ T cell response, decrease T regulatory cells and MDSCs, and may enhance Th1 response. Eliminating T-regs and MDSCs can bring about a more robust, effective tumor-specific immune reaction, as seen in trials using gemcitabine (Figure 1) [50]. This leads to the conclusion that there is a great benefit to chemotherapy in concert with immunotherapy (Figure 2) [44, 45, 46, 47]. 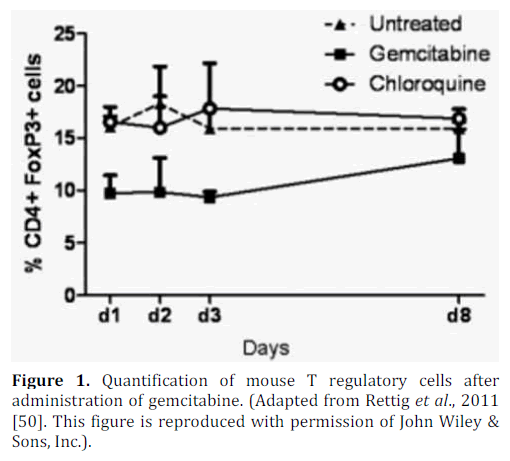 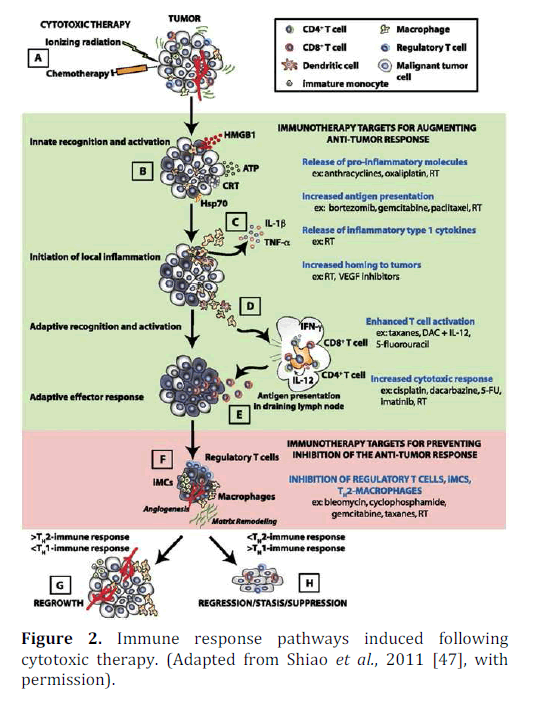 Probably one of the most prominent findings from ASCO 2013 is a large Phase III trial using the telomerase peptide vaccine GV1001 showing no survival advantage. Despite the theoretical applications of a vaccine targeting telomerase, it has not moved forward clinically; however there are still ongoing investigations and optimism [51].

The most promising and advanced therapies include GVAX and Algenpantucel-L. GVAX, when combined with cyclophosphamide is known to be a safe therapy with survival advantage. The addition of a modified Listeria monocytogenes with CRS-207 lead to no additional side effects but an improved survival difference when immunological response was achieved. Algenpantucel-L (currently in multicenter phase III trials) was shown to have enhanced effect when patients seroconverted and Anti-MSLN antibodies were detected; this could prove to be a valuable marker of vaccine efficacy in the future.

The addition of an attenuated adenovirus expressing p53 to a dendritic cell vaccine was also shown to enhance immune response and stabilize disease while also remaining a safe treatment. Viral vector trials are currently underway in the US and could offer an adjunct to immunotherapy, enhancing and broadening the immune response. Other therapies that are still in their infancy include an intriguing peptide vaccine which induces VEGFR- 2 T-cell response. It was shown to be safe and should be moving into larger trials. There could be an interest in combining this regimen with chemotherapy like gemcitabine or cyclophosphamide, as this may in enhance immune response by the previously mentioned mechanisms.

In addition to chemotherapy, other ways to possibly enhance vaccines in the future could include comparing the use of different adjuvant, like toll-like receptor agonists [52], as well as the addition of immunomodulators like ipilimumab (anti-CTLA-4), nivolumab (Anti-PD1), lucatumumab (anti-CD40) and interleukins. Ipilimumab has been unsuccessful as a single agent [53] but is currently being examined with alganpantucel-L by Le et al. at Johns Hopkins (NCT00836407 – http://clinicaltrials. gov). Anti-CD40 boosts CD8+ T cell response in murine models of pancreatic cancer, but has not been utilized in human models [54]. These adjuncts to immunotherapy may help to overcome anergy in cytotoxic T lymphocytes and create a more vigorous immune response, which has been trialed in other cancers and yet to be examined in pancreatic adenocarcinoma [55, 56, 57]. Current ongoing trials can be seen in Table 3.

To conclude, we can see that there is a strong rise in immunotherapy options for resilient cancers like pancreatic adenocarcinoma, yet there are many hurdles to overcome. It is becoming clear that we must not only find antigens to target, but decrease the tumor's ability to downregulate the immune response. Once this is achieved, immune recognition by cytotoxic T cells can be greatly enhanced by targeted vaccines, leading to tumor apoptosis and optimally a clinically significant response. It is our hope that immunotherapy will provide a survival benefit without adding toxicity to chemotherapy regimens. Optimally, it will produce a long lasting immune memory response that can be correlated with longer term survival with the need for fewer cycles of chemotherapy, namely in patients who could not tolerate the side effects of traditional chemotherapy. There is still a great body of work in this field, but we have a myriad of safe options that could be advantageous to enhancing survival without increasing suffering in patients with this devastating disease.

The authors have no conflicts to disclose