Context Carcinoid tumors arising from the bile ducts account for only a small fraction of biliary tract cancers. Case report We report herein a 42-year-old man with a carcinoid tumor of the common bile duct. He presented with abdominal pain, bloating and dyspepsia. Clinicolaboratory and imaging studies suggested a probable obstructive common bile duct lesion. The patient underwent an endoscopic retrograde cholangiopancreatography with a stent placement in view of common bile duct decompression. Persistence of symptoms prompted a laparotomy and pancreaticoduodenectomy that revealed a well-differentiated carcinoid tumor originating in the common bile duct. Conclusion Clinician’s familiarity with the unusual sites of origin of neuroendocrine tumors and/or atypical presentation of such tumors may facilitate their early recognition and allow for a timely intervention.

Carcinomas of extrahepatic biliary tract are rare tumors representing less than 2% of all diagnosed cancers [1]. Neuroendocrine tumors (NETs) arising from the bile ducts account for only 0.2-2.0% of all such tumors [1]. Endocrine cells of the gastrointestinal tract are endodermally derived cells. The paucity of these cells in the biliary tree may explain the rarity of NETs arising from this site. Familiarity with such unusual sites of origin of NETs may facilitate early recognition and characterization of such tumors. Our literature search identified circa 70 cases of well-differentiated NETs of extrahepatic bile ducts since the first reported case in 1959. The largest series of carcinoid tumors of the extrahepatic bile ducts to date was collected by the SEER Program of the National Cancer Institute and included 31 cases [2]. Herein, we report a rather unusual case of a carcinoid of the common bile duct that was treated surgically.

A 42-year-old African American man presented with nonspecific abdominal pain, bloating and dyspepsia for two months. A CT scan of the abdomen showed biliary obstruction with dilatation of biliary ducts, and suggested a soft tissue mass in the pancreatic head. The patient underwent an esophagogastroduodenoscopy with an endoscopic ultrasound (EUS) that revealed a dilated proximal common bile duct and a hypoechoic intraluminal density within the intrapancreatic portion of the common bile duct with post-acoustic shadowing. Subsequently, he underwent endoscopic retrograde cholangiopancreatography, which showed a smooth stricture in the intra-pancreatic portion of the common bile duct suggestive of an extrinsic compression (Figure 1). Cytology of the bile duct brushings was non-diagnostic, therefore, a biliary sphincterotomy with stent placement was performed. The patient presented a week later with worsening of upper abdominal pain. He had elevated transaminases, alkaline phosphatase, amylase and lipase times 2-4 the upper limit of normal, but normal serum bilirubin with fractions. A CT scan of abdomen and pelvis revealed an interval placement of a common bile duct stent with decompression of biliary system and a persistent prominence of pancreatic head. A magnetic resonance cholangiopancreatography showed a focal 80% narrowing of common bile duct with the presence of a stricture. The obstructive lesion was felt to be rather intraluminal or intramural than extrinsic in nature. The patient underwent a partial pancreaticoduodenectomy with gastrojejunostomy tube insertion. A white wellcircumscribed, firm nodular mass measuring 1.7x1.3x0.8 cm was found at a distance of 3.3 cm from the common bile duct margin and 2.2 cm from the ampulla of Vater (Figure 2). The tumor was composed of cords or trabecullae of endocrine cells separated by abundant fibrous stroma. The tumor cells had monomorphic appearance and ample cytoplasm (Figure 3a). Surgical margins were clear and a total of nine peripancreatic lymph nodes were found to be negative for metastases. Immunohistochemistry analysis revealed tumor cells positive for keratins, CD56, Ki- 67, and negative for CK7. Staining for chromogranin and synaptophysin was positive, consistent with a carcinoid tumor (Figure 3bc). The postoperative course was uneventful and the patient was discharged from the hospital. He remains disease-free six months postoperatively, with a good quality of life. 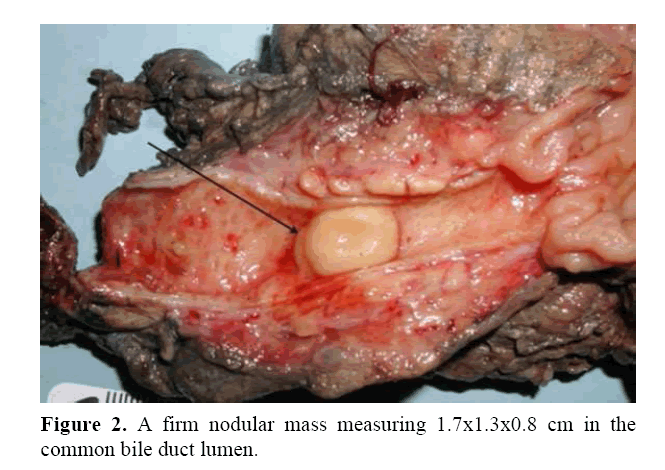 First described by Lubarsch in 1888, carcinoid tumors present characteristic histological, chemical and biologic properties [3]. Ciaccio postulated the endocrine origin of these tumors in 1906 [3]. His findings were further reinforced by the work of Gosset and Masson in 1914 [3]. Davies was the first to describe a carcinoid tumor of the common bile duct and pancreatic duct in 1959 [4]. The most common anatomical locations for extrahepatic carcinoid tumors are common bile duct (58%), perihilar duct (28%), cystic duct (11%) and common hepatic duct (3%) [5, 6]. Our patient was diagnosed with a carcinoid arising from common bile duct that is the most common location for NETs of the extrahepatic biliary tract.

These tumors are more common in women than in men, with a female-to-male ratio of 1.6:1 [2]. Their incidence peaks in the sixth decade of life [2, 7].

Although there are no proven predisposing factors, it has been postulated that chronic inflammation within the common bile duct leads to metaplasia of the sparse Kulchitsky’s cells, thus triggering their malignant degeneration [7]. Extrahepatic bile duct NETs are capable of secreting various substances and many stain positive for somatostatin, gastrin and serotonin. Yet, none of the reported cases showed evidence of a clearcut carcinoid syndrome or any symptoms of hormone secretion [8]. The most common symptoms are obstructive jaundice, biliary colic and pruritus [9]. Bile duct obstruction is often difficult to ascertain; incidence of false-negative cytology is high due to the submucosal location of these tumors. Similarly, initial cytology was negative in our patient. The diagnosis of a NET is oftentimes made postoperatively, after histological and immunohistochemical specimen analysis [10].

Our case exhibits several unique and unusual features, when compared with other reports in the literature. Firstly, his symptoms were rather nonspecific and possibly unrelated to the lesion itself, yet they clearly led to the diagnosis. Conversely, they could have represented early symptoms of biliary obstruction. In addition, he had normal total and direct bilirubin values in the setting of common bile duct obstruction. It is unclear whether pancreatitis was related to the common bile duct lesion (if so, it would be a rather unusual presentation). Of note, the main pancreatic duct was unaffected on imaging. Although the patient denied significant alcohol intake, alcohol-related pancreatitis cannot be excluded with certainty. Furthermore, extrahepatic carcinoid tumors tend to affect more commonly females, with an average age at presentation of 58.5 years [2]. Our patient was a male and younger than the average age at presentation.

For the most part, bile duct carcinoids tend to display an indolent behavior and exhibit a limited propensity for metastatic spread [11]. Complete surgical excision remains the treatment of choice, and it has been shown to provide long-term disease free survival [12]. It can be accomplished by extrahepatic bile duct excision with portal lymphadenectomy and Roux-en-Y hepaticojejunostomy reconstruction, but some distal common bile duct tumors are best treated with pancreaticoduodenectomy. Our patient was treated with a partial Whipple resection, including a partial pancreaticoduodenectomy with sampling of peripancreatic lymph nodes. Role of adjuvant chemotherapy remains controversial, as most studies have failed to demonstrate a survival advantage [12]. In the largest series published so far, the 10-year survival rate of carcinoid tumors of the extrahepatic bile ducts was 80% [2]. Larger tumor size, poorer differentiation, higher Ki-67 score, invasion of adjacent tissues, and presence of vascular/perineural invasion may further adversely impact prognosis [11, 12].

We certify that we do not have any affiliation with or financial involvement in any organization or entity with a direct financial interest in the subject matter or materials discussed in the manuscript (e.g., employment, consultancies, stock ownership, honoraria, and expert testimony). We do not have any commercial or proprietary interest in any drug, device, or equipment mentioned in the article below. No financial support was used for this work.