An Eighty-three-year-old woman diagnosed with slowly progressive insulin-dependent (type 1) diabetes mellitus due to high serum level of anti-glutamic acid decarboxylase antibody underwent coronary artery bypass grafting. She had abdominal pain and died 5 days after the operation. At autopsy, we found dissection of the right coronary artery, acute myocardial ischemia at the posterior septal wall, and severe necrosis from the duodenum to the ascending colon. In the pancreas, several islets showed large, deformed, and diminishing insulin- and glucagon-positive cells. The β-cell mass was reduced. We found infiltration of cluster of differentiation 8-positive lymphocytes in the acinar cells and islets. Sustained anti-glutamic acid decarboxylase antibody positivity in the present patient might be associated with the prolonged oxidative and proinflammatory states and the subsequent induction of myocardial and mesenteric ischemia.

Slowly progressive insulin-dependent (type 1) diabetes mellitus (SPIDDM) is a subtype of type 1 diabetes [1]. The characteristics of SPIDDM include long-term positive anti-glutamic acid decarboxylase (GAD), anti-islet cell, anti-insulin, and/or anti-insulinoma-associated tyrosine phosphatase-like protein-2 antibodies; similar insulin secretion to that of type 2 diabetes during the early stages of the disease; a possibility to achieve good control of diabetes mellitus (DM) by using diet therapy and oral hypoglycemic agents at the early stage of disease onset; and the insulin secretion eventually disappears, thus requiring the patient to receive insulin injections. Generally, patients with SPIDDM are aged between 30 and 50 years at diagnosis. The β-cell function of patients with SPIDDM is preserved for a long time and slowly declines over time; in general, insulin intervention is effective for preventing β-cell failure in SPIDDM patients [2, 3]. As SPIDDM was first reported, many studies have demonstrated that this subtype of type 1 diabetes is prevalent in several different ethnic groups, and it was later also termed latent autoimmune diabetes in adults (LADA) [4]. However, some differences have been reported between SPIDDM and LADA in terms of genetic predispositions, including the human leukocyte antigen class II and I genes, and the pathological mechanisms of these diseases are still controversial.

We report an 83-year-old woman with SPIDDM accompanied by concomitant acute myocardial and mesenteric ischemia.

An Eighty-three-year-old woman was admitted to our hospital because of chest pain. She was diagnosed with diabetes at the age of 48 years and with SPIDDM at the age of 81 years due to high serum levels of anti-GAD antibody (44.9 U/mL; reference value, <1.4 U/mL). She was treated with insulin, but her HbA1c level was 9.0%. She had poorly controlled glycemia, repeatedly showing both hyperglycemia and hypoglycemia. She was treated with antihypertensive agents, and her blood pressure was 129/69 mmHg. She did not show diabetic retinopathy, renal failure, or neuropathy.

After admission, she underwent coronary artery bypass grafting for triple-vessel disease because she showed high levels of creatine phosphokinase (2450 IU/L) and troponin (6.33 ng/mL) and an elevation of ST in II, III, and aVF. After the operation, an intra-aortic balloon pump was inserted because of poor circulation status. Her blood glucose level was kept stable with insulin. Three days after the operation, she experienced abdominal pain and stiffness. Abdominal radiography did not reveal marked changes. Therefore, abdominal operation was performed, and necrosis of the small intestine was observed. However, we did not perform small intestine resection. The patient died 5 days after the operation.

At autopsy, we found severe erosion, hemorrhage, and necrosis from the duodenum to the ascending colon (Figure 1a, arrows). No thrombus was detected in the superior mesenteric artery and vein (Figure 1b). We also found dissection of the right coronary artery, a clot in the bypass graft (Figure 1c), and acute myocardial ischemia at the posterior septal wall (Figure 1d). Arteriosclerosis was observed in the coronary arteries, aorta, and superior mesenteric artery. We did not observe microangiopathy or glomerular changes in the kidney. Based on these findings, we considered acute mesenteric and myocardial ischemia as the mechanisms of death. 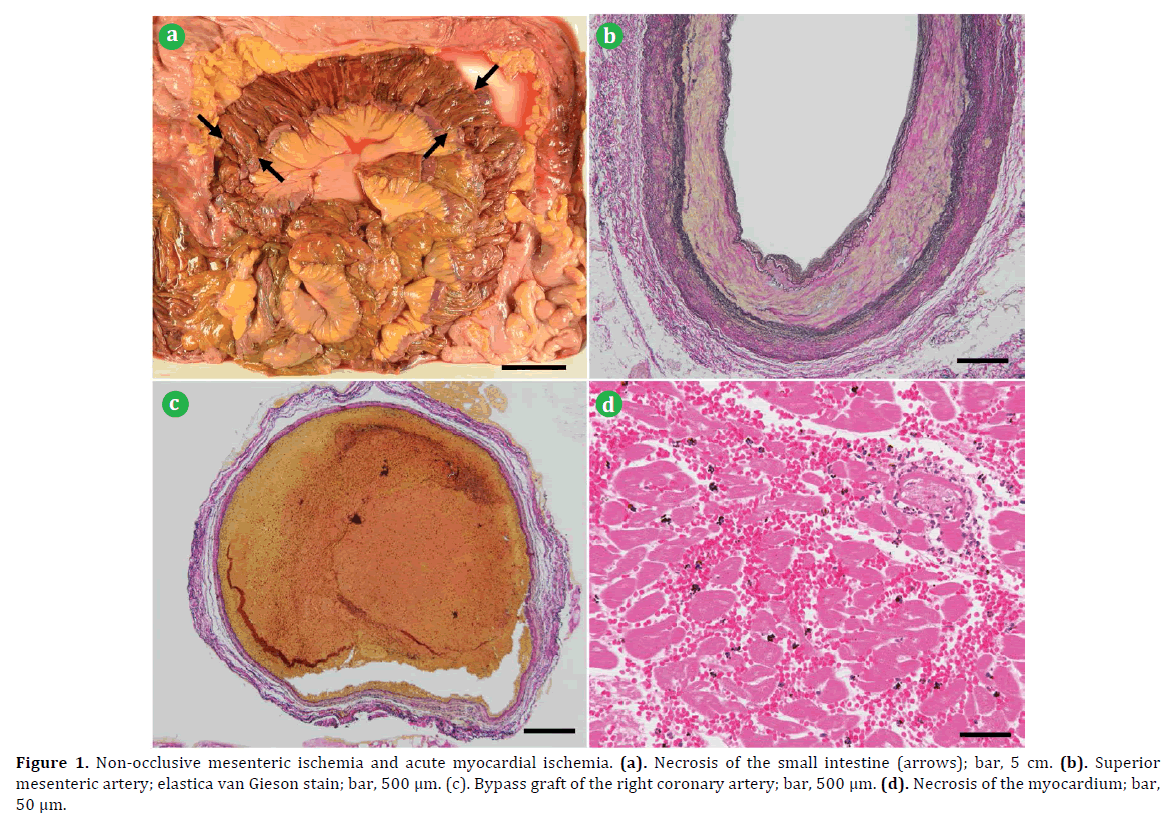 In the pancreas, several islets were enlarged and deformed (Figure 2a, arrows and inset) with diminishment of insulin- (Figure 2b, arrows and inset) and glucagonpositive cells (Figure 2c, arrows and inset). Such abnormal islets were detected in the pancreatic head and tail. Most of the islets expressed insulin (Figure 2d), but the β-cell mass seemed to be reduced. Furthermore, we found infiltration of cluster of differentiation (CD) 8-positive lymphocytes in the atrophic area of the acinar cells (Figures 3a, b), while no CD4-positive lymphocytes were detected. Moreover, slight infiltration of CD8-positive lymphocytes was observed in the islets (Figure 3c), whereas insulitis was not detected. The normal pancreas obtained from another autopsy case did not show infiltration of CD8-positive cells (Figure 3d). Beyond that, hyalinization of the islets was observed (Figure 3e), along with numerous pancreatic intraepithelial neoplasias (grades 1 and 2) in the main and branch pancreatic ducts (Figure 3f). The patient had no other known autoimmune diseases. 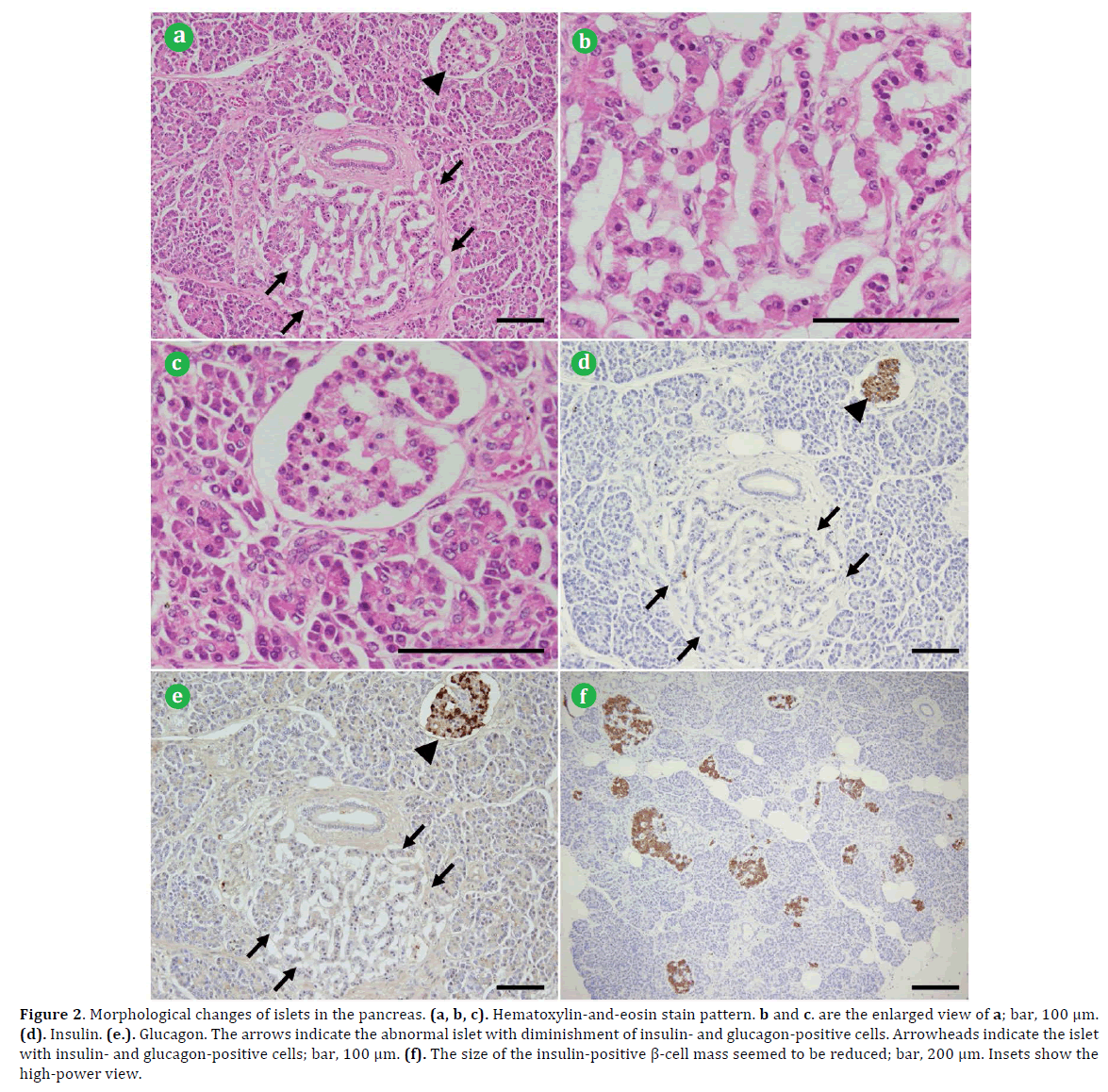 Figure 2. Morphological changes of islets in the pancreas. (a, b, c). Hematoxylin-and-eosin stain pattern. b and c. are the enlarged view of a; bar, 100 μm. (d). Insulin. (e.). Glucagon. The arrows indicate the abnormal islet with diminishment of insulin- and glucagon-positive cells. Arrowheads indicate the islet with insulin- and glucagon-positive cells; bar, 100 μm. (f). The size of the insulin-positive β-cell mass seemed to be reduced; bar, 200 μm. Insets show the high-power view. 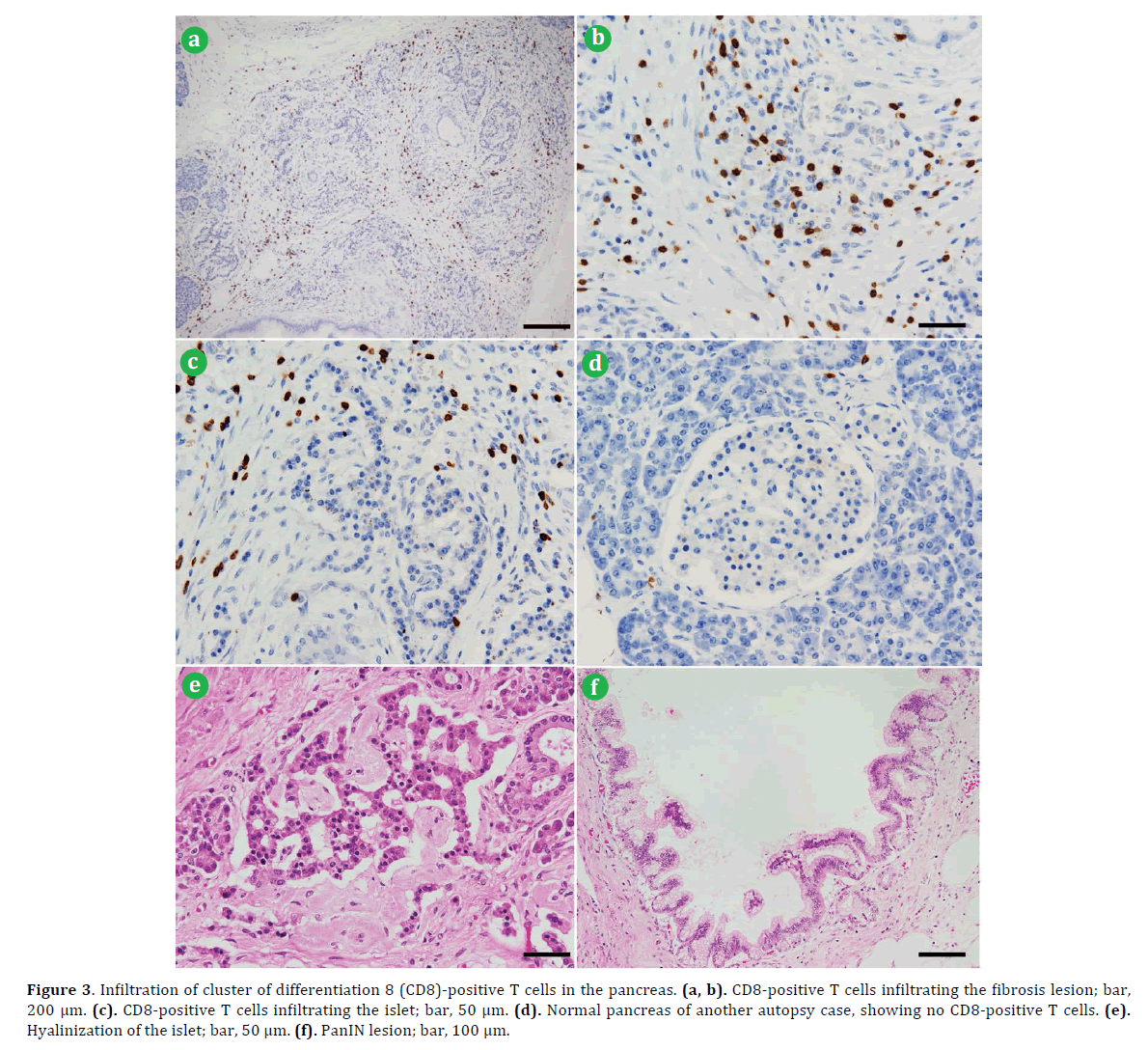 We found large abnormal islets with a reduction in not only the number of insulin-producing cells but also the glucagon level as well as the size of the β-cell mass. Such islets did not show cytological atypia; therefore, we considered them to be hyperplastic changes of the islets. These findings support the notion that patients with SPIDDM differ in characteristics from patients with type 2 and 1 DM. One previous report showed that the β-cell mass in SPIDDM cases was maintained as compared with that in type 1 DM, but the reduction in the size of the β-cell mass in the present case might be related to the fact that the patient had poorly controlled glycemia. Furthermore, islet antibody-positive long-term type 2 DM patients have been reported to exhibit reduced β-cell masses due to immune-mediated injury of the pancreatic β-cells [5]. Insulitis has been considered as a characteristic finding of the acute phase of type 1 DM [6], but not SPIDDM. Accordingly, the present case had no insulitis but had CD8-positive cell infiltration in the fibrotic lesion, without CD4-positive cell infiltration, suggesting continuous immune-mediated injury of the pancreas.

Both thrombi and hyperperfusion, which are difficult to distinguish, are commonly observed after cardiac surgery. The present case was clinically suspected to be non-occlusive mesenteric ischemia (NOMI), but we could not confirm the diagnosis because we did not perform angiography. DM is a significant risk factor of intestinal ischemia. The reported incidence of NOMI in DM patients is 5.9% [7]. One case of SPIDDM with NOMI was reported in an elderly woman showing right colon involvement [8].

Insulin deficiency, including SPIDDM, often causes hypoglycemia and poorly controlled glycemia. In turn, hypoglycemia may induce vascular obstruction via arrhythmia, oxygen stress, endothelial cell dysfunction, coagulation abnormality, and inflammation [9]. Moreover, glycemic variability has been shown to be associated with greater reactive oxygen species production and vascular damage than chronic hyperglycemia [10]. The sustained anti-GAD antibody positivity in the present patient might be associated with the prolonged oxidative and proinflammatory states, and the subsequent induction of mesenteric ischemia. Further analysis is needed to clarify the relationship between SPIDDM and ischemia. In conclusion, we report an autopsy case of SPIDDM with acute mesenteric and myocardial ischemias.

Morphological changes in islets, including enlarged islets and CD8-positive T cell infiltration, are thought to be pathological changes due to SPIDDM. Clinicians should pay close attention to the complications of SPIDDM.

Informed written consent for the use of tissues was obtained from bereaved family.

There is no conflict of interests.