The prevalence of pancreatic cystic lesions has been estimated to range from 2.4 to 24% by imaging (computed tomography and magnetic resonance imaging) and autopsy studies [1, 2, 3, 4, 5]. Endoscopic ultrasound (EUS) with fine needle aspiration (FNA) and cyst fluid analysis is an effective method of classifying pancreatic cystic lesions [6, 7, 8, 9, 10], as non-invasive imaging alone can be unreliable with reported accuracies varying from 20 to90% [11, 12, 13, 14, 15].

Separating pancreatic cystic lesions with malignant potential from those typically associated with a benign clinical course is an important clinical distinction with respect to management as curative surgery can be offered in many instances. Decisions regarding surgical management of mucinous lesions are based on the projected risk of malignancy and/or the presence of symptoms relatable to the cyst. In fit patients, symptomatic cysts are resected. In asymptomatic patients, operative management is reserved for lesions at high risk for malignant transformation, such as mucinous cystic neoplasms, main duct intraductal papillary mucinous neoplasms (IPMNs), and rapidly enlarging side branch IPMNs or side branch IPMNs larger than 3 cm [16, 17, 18, 19, 20].

An inexpensive, easily obtained, and widely applicable biomarker which could predict malignant potential or lack thereof would be of significant clinical utility. It has been suggested that the degree of cyst fluid CEA elevation can differentiate benign from malignant IPMNs [21]. Maire et al. [21] identified cyst fluid CEA levels exceeding 200 ng/mL to have a negative predictive value equal to 96% for the diagnosis of malignant IPMN. They suggested this value serve as a threshold for conservative management of branch type IPMNs in the absence of traditional factors predictive of malignancy.

The aim of our study was to determine whether elevated cyst fluid CEA levels are predictive of invasive cancer in a cohort of patients with surgically resected intraductal papillary mucinous cystic neoplasms.

A cross sectional study was conducted exclusively at the Moffitt Cancer Center, which is a National Cancer Institute designated comprehensive cancer center.

Patients were identified through review of an institutional surgical database, inclusive of all patients undergoing pancreatic surgery at the Moffitt Cancer Center between January 1st, 2000 and January 1st, 2010. All patients with a final pathologic diagnosis of IPMN (main duct, mixed type, or side branch) who also underwent pre-operative EUS-FNA with cyst fluid analysis at our institution were included in the study. A total of 47 patients were identified meeting inclusion criteria.

Indications for surgical resection in fit patients included: symptomatic cysts, main duct IPMN, side branch IPMN measuring greater than or equal to 30 mm, rapidly enlarging side-branch IPMN, the presence of mural nodule or thickened cyst wall, and/or cytology identifying high grade dysplasia or adenocarcinoma regardless of cyst size. Surgical pathology reports were reviewed to determine the final pathologic diagnosis. All surgical specimens were reviewed by the same expert cytopathologist (B.A.C.) and categorized based on the degree of dysplasia or cancer.

Review of the electronic medical record was performed to identify EUS-FNA procedural details and to identify corresponding cyst fluid analysis and cyst fluid CEA concentrations. Endoscopic ultrasound with fine needle aspiration was performed by one of three experienced endosonographers after informed consent was obtained.

The linear echoendoscopes (GFUC30-P and GF UC140-P, Olympus America, Inc., Center Valley, PA, USA) were used in conjunction with a portable ultrasound console (Prosound Alpha SSD 5000, Aloka, Wallingford, CT, USA) for image acquisition. As has been described previously, a conventional EUS-FNA technique was practiced [23, 24, 25]. Intravenous antibiotics (3 g ampicillin/sulbactam or 400 mg ciprofloxacin) were administered prior to cyst puncture in all cases. Single cyst puncture via trans-gastric or trans-duodenal FNA was performed with either a 19 or 22 gauge needle based on the location and size of the cystic lesion.

An on-site cytotechnologist was present for immediate on-site cytological adequacy analysis of cyst fluid aspirate. The cytotechnologist would use a drop of fluid to prepare two smears: one air-dried and the other alcohol fixed. The air-dried smear was stained with Diff-Quik and assessed on-site for adequacy. The remaining fluid was then taken to the cytopathology laboratory where aliquots of the fluid were submitted for CEA and amylase analysis and the remainder was submitted for routine cytopathological processing. The practice was abandoned as intra-procedural and/or direct clinical management decisions were not affected by the cytotechnologists’ adequacy interpretation. Patients were observed after EUS-FNA and discharged home within 1 hour of procedure completion when no immediate complications were apparent; all patients received oral antibiotics (ampicillin/sulbactam or ciprofloxacin) for 3-5 days for post-procedure for prevention of cyst infection. During the study period, no patient required hospital admission for complications related to EUS-FNA.

Once received in the cytopathology laboratory at Moffitt Cancer Center, the fluid was spun down using a Shandon Cytospin (Thermo Scientific, Florence, KY, USA). An aliquot of the supernatant was removed and submitted for CEA and amylase testing. The CEA fluid was performed at ARUP Laboratories (Salt Lake City, UT, USA) and the amylase testing was performed at the Moffitt Cancer Center. The sediment was used to prepare two cytospins stained with standard Papanicolaou stains and a cell block stained with H&E.

The study was approved by the Moffitt Cancer Center Scientific Review Committee and the University of South Florida Biomedical Institutional Review Board.

Statistical analysis was performed in consultation with or by the Moffitt Cancer Center Biostatistics Department. The sampling distribution of CEA levels was right-skewed, like most biomarkers. After log10 transformation, the sampling distribution was approximately normal within each stage (P=0.500, P=0.278, P=0.033, P=0.037 in low grade dysplasia, moderate dysplasia, high grade dysplasia, and invasive cancer, respectively; Lilliefors test). One-way ANOVA was performed to examine if there is any differences in log10(CEA) levels among various pathologic stages. Differences were considered statistically significant at two-tailed P value less than 0.05. Statistical analysis was performed using MATLAB (version 7.13.0.564, 2011; The MathWorks Inc., Natick, MA, USA).

A total of 87 patients underwent surgical resection of pancreatic IPMN during the 10-year study interval. Forty cases were excluded as a pre-operative EUSFNA was not performed. The study cohort consisted of the remaining 47 patients (54.0%); 32 (68.1%) men and 15 (31.9%) women with a mean age of 66 years and range 24-88 years.

The pre-operative mean and standard deviation, median, and range of CEA levels are summarized in Table 1. The variability is very large within each stage. The mean levels of CEA increased as pathology progressed from low grade dysplasia (1,261±1,679 ng/mL) to moderate dysplasia (7,171±22,210 ng/mL) to high grade dysplasia (10,807±36,203 ng/mL). However, once invasive cancer developed, the mean CEA level decreased to 462±631 ng/mL (Table 1). There was no significant difference in CEA levels between pathologic diagnoses (P=0.869) (Figure 1). 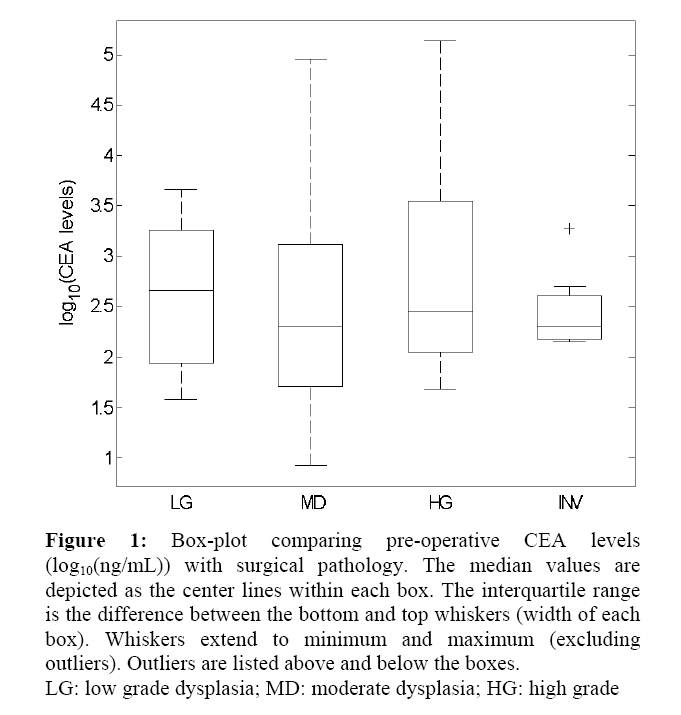 Figure 1. Box-plot comparing pre-operative CEA levels (log10(ng/mL)) with surgical pathology. The median values are depicted as the center lines within each box. The interquartile range is the difference between the bottom and top whiskers (width of each box). Whiskers extend to minimum and maximum (excluding outliers). Outliers are listed above and below the boxes.
LG: low grade dysplasia; MD: moderate dysplasia; HG: high grade

Endoscopic ultrasound with fine needle aspiration and subsequent pancreatic cyst fluid analysis is a valuable method for classification of pancreatic cystic lesions [6, 19, 20]. Cyst fluid CEA concentrations exceeding 192 ng/mL have proven accurate for the distinction of mucinous from non-mucinous cystic neoplasms [6]. However, it is unclear whether the degree of cyst fluid CEA elevation is predictive of malignant behavior [21, 22] and if clinical decision making should be affected by the degree of cyst fluid CEA elevation. Through a cross sectional study performed at the Moffitt Cancer Center, we sought to further investigate whether cyst fluid CEA concentrations were predictive of histologic progression to invasive cancer in IPMNs.

The underlying mechanisms involved in cyst fluid CEA decline are uncertain. CEA is a member of a supergene family including 29 genes of which 18 are expressed and 11 are pseudo-genes. The tumor marker CEA is also known as CEA-related cell adhesion molecule-5 (CEACAM5). CEACAMs are molecules that meditate homophilic and heterophilic cell-cell interactions in epithelial cells and regulate cell adhesion, migration and apoptosis [26]. CEA/CEACAM5 is normally located at the membrane luminal surface of non-malignant polarized pancreatic duct epithelial cells. In malignant glands, the loss of tight-junctions is associated with the loss of a polarized distribution of CEA with resulting diffuse staining throughout the cell [27]. CEACAM5 is retained in the membrane by a glycosylphosphatidylinositol (GPI) anchor. Release into the lumen can be triggered by cleavage of the GPI-anchor by GPI-linked phospholipase-D (GPI-PLD) [28]. Therefore, a possible explanation for the fall in cyst fluid CEA level with progression to invasive adenocarcinoma may be that fewer cells with intact tight-junctions are present and therefore there is less CEA at the luminal surface available for release into the cyst fluid.

Taken together, our data and that of Correa-Gallego et al. [22] suggest the degree of cyst fluid CEA elevation is a poor predictor of malignant degeneration within IPMNs. Therefore, clinical management decisions should not be based upon cyst fluid CEA levels. Using CEA levels alone, 40% of patients with malignant IPMNs in our institution and 29% of patients with malignant IPMN in the Correa-Gallego series [22] would not have been offered surgical resection.

Despite limitations associated with retrospective data collection, our study represents a large, single center experience focused exclusively on surgically resected IPMNs with all cases reviewed by an expert cytopathologist. Our data suggests that elevated pancreatic cyst fluid CEA levels are not predictive of invasive cancer; therefore, the clinical utility of cyst fluid CEA levels remains limited to only defining whether a cyst is mucinous verses non-mucinous and not whether surgical resection should be performed based on the degree of cyst fluid CEA elevation.

One important, unanswered question remains: “Why do cyst fluid CEA levels decline when IPMNs progress from dysplasia to invasive cancer?” Further research is warranted focused on pathophysiological mechanisms of cyst fluid CEA concentration changes as IPMNs progress from low grade dysplasia to invasive cancer. The answers may lead to the development of predictive biomarkers which may ultimately enhance our diagnostic ability and improve patient outcomes.

None of the authors have relevant conflicts of interest to disclose