Does Etiology of Acute Pancreatitis Matter? A Review of 391 Consecutive Episodes

Context Acute pancreatitis can be triggered by a variety of factors ranging from short lasting to sustained disruptions. It is plausible that the characteristics and course of disease differ among etiologies. Data distinguishing characteristics of patients with pancreatitis of biliary, alcoholic, idiopathic or other origin are scarce and conflicting. Objective To compare patients' characteristics, baseline parameters on admission, and outcome in patients with an episode of acute pancreatitis in whom the etiology was thoroughly determined. Design Retrospective study. Setting Single center. Patients Three-hundreds and 91 consecutive episodes of acute pancreatitis through the years 2008 to 2011. Main outcome measures Gender, age, body mass index, Charlson comorbidity index, history of pancreatitis, heart rate, blood pressure, plasma lipase, hematocrit, plasma creatinine, white blood cell count, rate of persistent organ failure and necrosis, maximum Creactive protein, duration of hospitalization, mortality. Results There were marked differences between the groups. Biliary etiology was associated with higher age and body weight, female predominance, higher plasma lipase, and a favourable outcome. Alcoholic etiology had male predominance, a tendency for initial hemoconcentration, a lower plasma lipase, and the highest rate of necrosis. Idiopathic etiology had the highest rate of persistent organ failure and the highest mortality. Conclusions Biliary, alcoholic and idiopathic acute pancreatitis should be treated as distinct entities. While alcoholic episodes have the highest risk of necrosis, the worst outcome was observed in the idiopathic group. Hence, finding no causality for an episode of acute pancreatitis after thorough investigation might be a predictor for poor outcome. Larger studies are warranted to confirm this.

Acute pancreatitis can be triggered by a variety of factors including duct obstruction, toxic agents, primary inflammation (e.g. infection, autoimmune), and trauma [1, 2]. The most common etiologies are gallstones and alcohol comprising 60-85% of all incidents [3-5]. Approximately 10-20% occurs without a detectable cause and are considered "idiopathic". However, the pathophysiological pathway from trigger to the destructive response has not been entirely determined yet. It is currently not known whether etiology has an impact on the course of disease. However, differences may be relevant in terms of severity prediction, monitoring, and treatment of patients with acute pancreatitis.

Some differences between the etiologic groups are well recognized: The incidence of acute biliary pancreatitis increases with age and has a female predominance.

Several issues limit the comparability of studies on etiology of acute pancreatitis. Firstly, the etiology is often difficult to determine. In patients with presumed idiopathic acute pancreatitis, endoscopic ultrasound (EUS) and magneticresonance cholangiopancreatography (MRCP) upon follow-up found possible causes in the majority of cases (mostly cholelithiasis and biliary sludge) [17]. Secondly, there are vast differences in incidence of the etiologies in different countries. E.g., while 24% biliary and 61% alcoholic cases are reported in Hungary, the respective proportions are 71% and 6% in Greece and 60% and 13% in Italy [3]. Thirdly, both severities on admission and case fatality have reduced during the last decades [4]. Moreover, recent advances in the treatment of infected necrosis might have helped to further reduce mortality [18]. Hence, the actual characteristics of the different etiological types of acute pancreatitis are uncertain.

We therefore sought to analyze the characteristics of the three most frequent types of acute pancreatitis in consecutive episodes of the disease with thoroughly determined etiology. Our hypothesis was that we could detect differences in the characteristics that could be relevant for prognosis and therapy.

We reviewed the charts of all our inpatients, who presented with acute pancreatitis in our emergency department from January 2008 to December 2011. All patients were at least 18-year-old. Acute pancreatitis was defined by the revised Atlanta Classification [19]. Referrals from other hospitals were excluded. The tracking process excluding patients with false disease identification and missing or incomplete charts and the standard treatment in our department have been described elsewhere in detail [20].

Biliary etiology was defined as evidence of a gallstone in the bile duct and/or a cholestatic pattern of liver function tests (alanine and aspartate transaminase, gammaglutamyltransferase, alkaline phosphatase) normalizing within days after admission. All patients underwent abdominal ultrasound testing. In patients with cholangitis or worsening jaundice, a prompt endoscopic retrograde cholangiography (ERC) with sphincterotomy was performed. This procedure was also electively performed in patients that were too old or too ill for cholecystectomy. All other patients underwent EUS a few days after the event to evaluate the bile duct and the pancreas. In case of retained gall stones in the common bile duct, an ERC with sphincterotomy was performed. An early cholecystectomy was recommended in all eligible patients with biliary pancreatitis. Commonly, patients were discharged and free to choose a hospital for surgery. Data on the cholecystectomy rate and the date of surgery were not available. Alcoholic etiology was defined as evidence of sustained uncontrolled consumption of alcoholic beverages (>30 g alcohol per day in men and >20 g alcohol per day in women) and/or an alcohol excess (defined as a drunken state in the patient’s history) in the week prior to admission while excluding acute pancreatitis of other causes.

All patients were screened for hypercalcemia, hyperlipidemia, hereditary conditions, and in unclear cases for Immunoglobulin G4 antibodies, lactoferrin antibodies, anticarbonic anhydrase antibodies, and antinuclear antibodies. Moreover, all patients that were primarily considered non-biliary underwent endoscopic ultrasound (EUS) a few days after the event to evaluate the pancreas and the bile duct. Thereby they were screened for local complications and for etiological hints such as tumors or pathognomonic pancreas morphology. In case of incidentally found calculi in the bile duct, the acute pancreatitis was considered biliary and was treated as mentioned above. Chronic pancreatitis was diagnosed when imaging showed evidence of the disease. Patients with evidence of necrosis or who did not recover within four days after admission underwent a contrast enhanced CT scan. Local and systemic complications were defined by the revised Atlanta Classification [19].

Data was extracted from the charts and further processed without the identification of the patients. The study was approved by means of the local ethics committee. The work was carried out in accordance with the Declaration of Helsinki, and the anonymity of all participants was guaranteed.

The presentation of the data is descriptive. The differences between continuous variables of the four etiology groups were tested by the Kruskal-Wallis test, the categorical variables were tested by Pearson's chi-squared test. A P value less than 0.05 was considered significant.

The distribution of age and gender among the four etiology groups is shown in Figure 1. In biliary pancreatitis incidence increased with age. The group was dominated by women and the incidence peaked in the 4th and 6th decade. In alcoholic pancreatitis there was a marked peak in the 5th decade and this group was dominated by men. In idiopathic pancreatitis there was a peak in the 8th and possibly in the 5th decade, the men were younger than the women. In the group with miscellaneous causes there was no identifiable pattern. 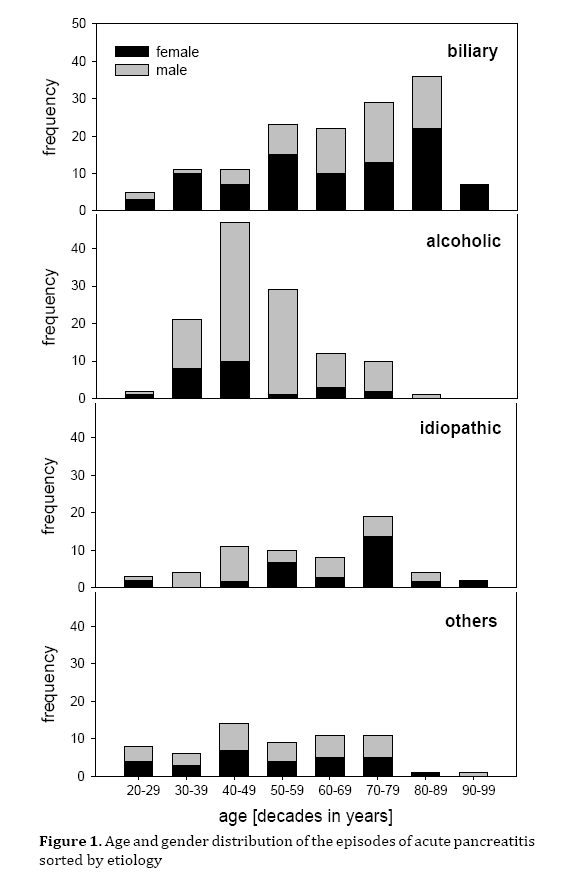 Figure 1. Age and gender distribution of the episodes of acute pancreatitis sorted by etiology

Other characteristics of the different etiologies are given in Table 1. There were highly significant differences between the etiologies with regard to the baseline parameters gender, age, percentage of recurrent episodes, evidence of chronic pancreatitis, and plasma lipase on admission. There were also significant differences with regard to body mass, heart rate, and hematocrit. No differences could be detected with regard to comorbidity, systolic blood pressure, plasma creatinine, and white blood cell count. The outcome parameters including persistent organ failure, occurrence of necrosis, and mortality differed significantly, maximum C-reactive protein (CRP) and duration of hospitalization did not.

To our knowledge this is the first study on a large number of consecutive episodes of acute pancreatitis with a thorough work-up of etiology in all cases. Previous studies have defined biliary pancreatitis by non-specific methods [8, 11, 12, 14] or did not give any definition [7, 9]. We therefore assume that biliary origin might not have been categorized correctly in all cases. This would in part explain the discrepant conclusions on characteristics of the etiological groups. In our study, we used a number of tests to define the correct entity [17, 21]. Moreover, the vast majority of patients underwent EUS to exclude undetected choledocholithiasis and to determine abnormalities of the pancreas.

Our data shows that different etiologies of acute pancreatitis differ in a variety of aspects. Firstly, the characteristics of the four groups differ significantly. As shown in Figure 1 we were able to reproduce the well-established features of age and gender in biliary and alcoholic pancreatitis [6, 7]. The marked differences in body mass between these two groups may be explained by the association of gallstones with obesity and the high prevalence of chronic pancreatitis (and probably also malnutrition) in patients with alcoholic episodes. The characteristics of idiopathic pancreatitis have been specified less clearly. In a large epidemiological study, patients with idiopathic pancreatitis were of same age and similar gender distribution as patients with pancreatitis of biliary origin [7]. However, the authors point out the possibility of misclassifications by overlooking gallstones and, hence, misinterpreting biliary pancreatitis as idiopathic. In our study we found a frequency peak in the 8th decade and possibly also in the 5th. This pattern contrasts with the cases of non-biliary, non-alcoholic pancreatitis caused by an obvious trigger where gender and age were distributed evenly.

The second aspect is the presentation on admission. There were significant differences in heart rate, plasma lipase, and haematocrit. Biliary pancreatitis was associated with a higher, alcoholic pancreatitis with a lower lipase. This discrepancy has already been observed in other studies [25-26]. The difference was still evident when we excluded patients with recurrent or chronic pancreatitis. It therefore seems unlikely that the lower lipase in alcoholic pancreatitis is attributable to a loss of exocrine capacity over a longer period of organ damage. It can rather be explained by a different dynamic of a toxic trigger in contrast to the sudden incident of gallstone obstruction. It might also be attributed to the analgesic effect of alcohol leading to a delay in presentation to the emergency department [27].

Patients with alcoholic pancreatitis had the highest heart rate and the highest hematocrit on admission. Both parameters are indicators for hemoconcentration. Hemoconcentration on admission has been linked to the development of subsequent necrosis [28,29]. In our study, patients with an alcoholic episode indeed had the highest rate of necrosis. In contrast, the necrosis rate in idiopathic pancreatitis was nearly as high although heart rate and hematocrit on admission were as low as those in pancreatitis of biliary origin. Hence, the association might be an epiphenomenon combining two distinct features of alcoholic pancreatitis. This could offer an explanation for the finding, that aggressive volume therapy does not prevent necrosis [20,30].

In summary, we found substantial differences between the characteristics of the major etiological types of acute pancreatitis. Alcoholic episodes have the highest risk of necrosis and the worst outcome can be found in the idiopathic group. Differentiating between the etiologies seems to be necessary to correctly assess the risk for certain complications. Large scaled studies with a thorough search for the cause in each episode will be necessary to determine specific risk factors.