Context Intraductal Papillary Mucinous Neoplasm of the pancreas is an increasingly diagnosed neoplasm that rarely penetrates adjacent organs. Case report A 60 year old asymptomatic male was seen for evaluation of iron deficiency anemia. Patient was found to have a mucin secreting tumor during esophagogastroduodenoscopy. Computed tomography scan showed an enlarged pancreas with numerous focal irregularities with an ill-defined mass. Surgical resection was offered but he refused and about one year later he presented again with jaundice, abdominal pain and nausea. Magnetic resonance imaging of the abdomen showed a fistula between the pancreatic mass and the distal common bile duct. He underwent surgical resection. Histology showed an intraductal pancreatic mucinous neoplasm with foci of adenocarcinoma. Repeat esophagogastroduodenoscopy and computed tomography scans of the abdomen at one and three years showed post-operative anatomy with no tumor recurrence. Conclusion In this case an intraductal papillary mucinous neoplasm penetrated the duodenum, stomach and the common bile duct causing a large pancreaticobiliary fistula and obstructive jaundice. Despite a one year delay in surgical resection and extensive disease, our patient had an excellent long term outcome.

Intraductal Papillary Mucinous Neoplasm (IPMN) of the pancreas is characterized by cystic dilation of pancreatic ductal system, papillary growth and thick mucin secretion. This tumor has been relatively recently defined, but benign tumors to invasive carcinomas have been described [1]. Rarely is an IPMN reported to penetrate or create fistulas to adjacent organs [2, 3, 4, 5, 6, 7, 8, 9, 10]. We report a rare case of IPMN with a focus of adenocarcinoma penetrating three adjacent organs and creating a pancreaticobiliary fistula, treated by an extensive surgical resection with an excellent long term outcome.

A sixty-year-old Caucasian male was seen in gastroenterology clinic for evaluation of iron deficiency anemia. Patient was completely asymptomatic and had a normal physical examination. Colonoscopy performed one year prior to presentation was normal. He underwent an esophagogastroduodenoscopy (EGD) which showed a 1 cm ulcerated lesion at antrum, with friable tissue at ulcer base. In the duodenal bulb, an exophytic friable, soft papillary growth arising and completely occluding a diverticulum with copious amount of mucin was found. Papilla had mucin extruding from the orifice causing a fish eye appearance (Figures 1 and 2). Biopsies from the gastric and duodenal lesions showed adenoma with high grade dysplasia with positive mucin stains. Computed tomography (CT) scan with contrast of his abdomen showed an enlarged pancreas with numerous focal irregularities with an ill-defined mass (Figure 3). Magnetic resonance imaging (MRI) of the abdomen showed a large (10 cm x 7.5 cm) multilocular cystic mass in body and tail of pancreas, associated with main pancreatic duct (MPD) dilatation up to 12mm, most likely representing a mixed type IPMN. Endoscopic Ultrasound (EUS) showed a complex cystic mass with mixed hypoechoic cystic and solid components and mural nodules diffusely involving the pancreas (Figure 4). Surgical service follow up was completed and resection was recommended, but patient refused and opted to do nothing. One year later he returned with abdominal pain, nausea and jaundice. MRI of the abdomen demonstrated enlarged pancreatic mass with a markedly dilated pancreatic duct which communicated with the distal part of the dilated common bile duct (CBD). Endoscopic Retrograde Cholangiopancreaticogram (ERCP) showed 2 fistulas at the antrum with mucinous discharge, a large mass at the duodenal bulb with mucin drainage, and a dilated CBD. A temporary plastic biliary stent was placed for decompression. Patient was referred for surgery and he underwent resection. A total pancreatectomy with splenectomy, mobilization of the splenic flexure, lysis of adhesions was performed. Intraoperative frozen section confirmed invasive cancer into the stomach. An intraoperative injury to the portal vein required temporary shunt placement using a 28 French chest tube. His abdomen was temporarily closed and he was monitored in the intensive care unit overnight. He returned to the operating room the next day for re-laparotomy with repair of the portal vein using a polytetrafluorethylene (PTFE) graft, and hepaticojejunostomy. His abdomen was packed then temporarily closed. Two days later he was taken for abdominal wash out with gastrojejunostomy and placement of Corpak feeding tube. About 2 weeks later then patient returned to the operating room for closure of his complex abdominal wall defect. He was discharged home after a short period of recuperation. Surgical pathology reported an intraductal papillary mucinous carcinoma, oncocytic variant, 15.6 cm in greatest diameter with the tumor directly invading the distal stomach and duodenum. The bile duct mass was also reported as intraductal papillary mucinous carcinoma. The spleen showed no pathologic change. Forty one resected lymph nodes showed no malignancy. Final tumor staging was IIa (pT3N0M0) and adjuvant chemotherapy was recommended after resection, however the patient declined chemotherapy. Following resection the patient has subsequently done well with repeat EGD’s and CT scans of abdomen at 1 and 3 years showing no evidence of tumor recurrence. 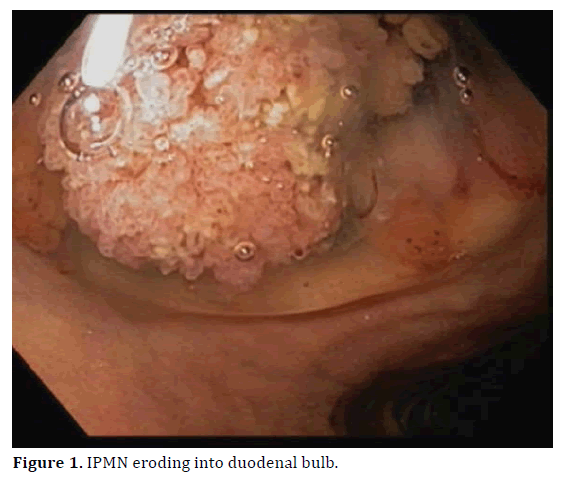 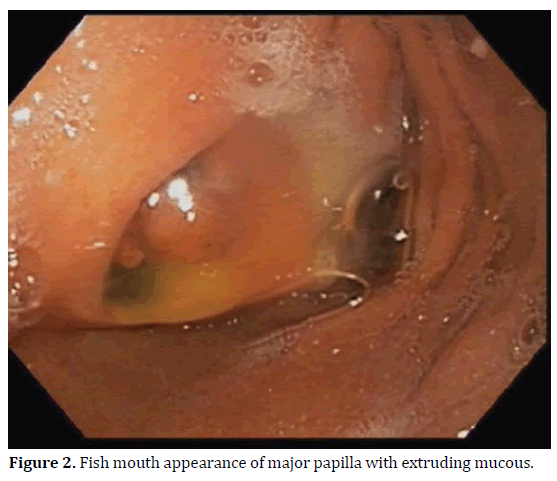 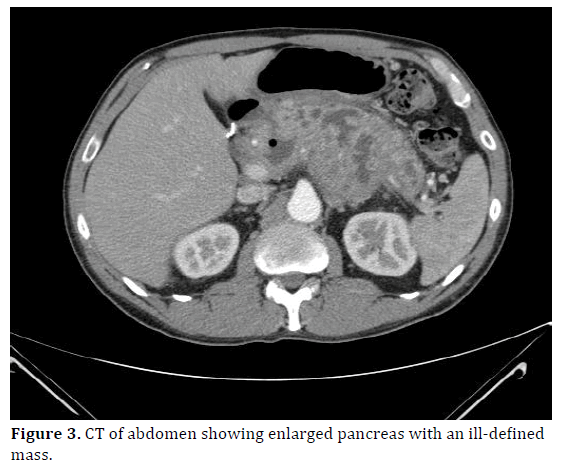 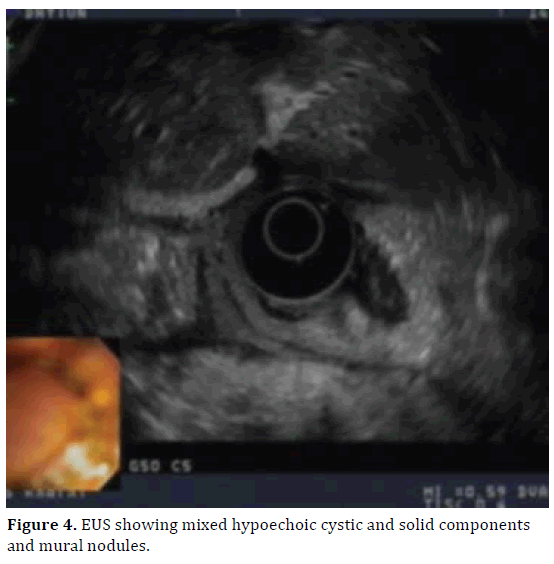 Cystic pancreatic lesions are commonly recognized on autopsy, with about 5% being neoplastic [11]. As cross sectional imaging has become more common, categorization of these neoplasms have become more specific [12]. The term Intraductal papillary mucinous neoplasm (IPMN) was coined in a 1996 paper by the World Health Organization (WHO) [13]. IPMN of the pancreas is usually benign but potentially malignant epithelial neoplasm can arise from mucin producing cuboidal cells in the pancreatic ducts. IPMNs can vary from benign to malignant with various degrees of aggressiveness [14]. They may rarely rupture, then grow without symptoms and penetrate adjacent organs [15]. Two possible mechanisms have been suggested for the penetration of IPMN to adjacent organs: direct invasion by the tumor or spontaneous rupture of the tumor due to increased intraductal pressure by mucin production [4]. In our case, although a focus of invasive adenocarcinoma was present on the surgical specimen, which extended beyond the pancreas, we believe the penetration to adjacent organs was probably partly due to mechanical penetration as tissue biopsied from penetrated organs did not reveal malignancy.

In this case, the tumor penetrated three adjacent organs including the duodenum, stomach and the common bile duct causing a large pancreaticobiliary fistula and obstructive jaundice. These sites represent the most common site of penetration with duodenum invasion being most common (59%), followed by the common bile duct (51%) and the stomach (17%) [5]. Fistula formation is reported in 39% of cases where an IPMN penetrated multiple adjacent structures [17]. This case is rare in that only few cases have been reported with three adjacent structures involvement.

Surgery is the treatment of choice of symptomatic IPMN or those with high risk features suggestive of high grade dysplasia or invasive component, but surveillance is appropriate in selected patients with low risk IPMN features [18]. Prognosis after surgical treatment in patients with IPMN is favorable, even in the presence of invasive component, compared to pancreatic ductal adenocarcinoma [19]. In this patient surgery on initial presentation was indicated per the revised Sendai criteria due to the MPD dilation >10mm, large size of the cyst and the presence of mural nodule. The risk of malignancy and invasive lesions in these cases is high and the 5 year survival is low (31-54%) [20]. This patient refused surgery initially which resulted in delay in surgical treatment for about one year after initial diagnosis. In our case surgery was extensive due to the multiple organs involved, but it was associated with very good outcomes with no evidence of disease recurrence at three years. Our case underscores the importance of considering aggressive surgical management even in the presence of penetrating disease and invasive component as a potential curative option.

In conclusion, we report a very rare case of invasive IPMN penetrating three adjacent structures, with a very slow but progressive clinical course, that presented with iron deficiency anemia and obstructive jaundice. In this case, we emphasize that surgery for IPMN can be associated with very good outcomes, despite the penetration of multiple organs and presence of malignancy, thus should be considered as a potentially curative option.

The authors declare that there are no conflicts of interest.