Von Hippel-Lindau disease is a rare dominant autosomal genetic disease determined by the inactivity of an onco-suppressor gene identified in 1993 and located on the short arm of chromosome 3 [1]. This gene has a role of crucial importance in the regulation of the vascular endothelial growth factor (VEGF); therefore, its inactivation promotes an overexpression of the VEGF and the angiogenesis of the tumor characterizing this syndrome [2]. The main clinical and radiological manifestations of the disease are hemangioblastoma of the retina and of the nervous central system, clear cell renal tumors, pheochromocytoma, cystadenoma of the epididymis, tumors of the endolymphatic sack, carcinoid tumors, pancreatic tumors, and multiple cystic formations of the pancreas as well as of the kidneys and the epididymis [2, 3]. Pancreatic gland involvement ranges from 15 to 77% of the cases [1]. An ultrasound scan (US), computed tomography (CT), and magnetic resonance imaging (MRI) play a crucial role both in the initial evaluation of the various manifestations of the disease as well as in the follow-up of these patients [4].

We herein show an integrated imaging study using CT and MRI in evaluating the involvement of the pancreatic gland in Von Hippel-Lindau syndrome. 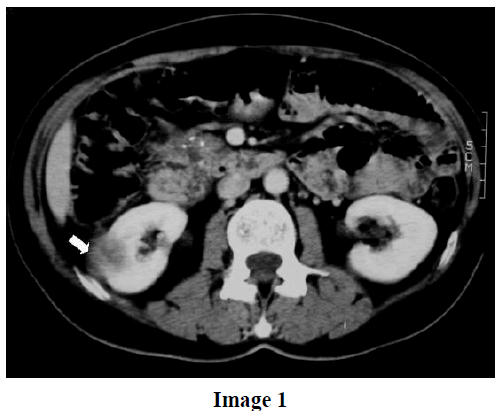 During the patient’s stay in our hospital, the diabetes was progressively compensated and a further radiological examination was required. A contrast-enhanced computed tomography was carried out and the pancreatic gland appeared increased in volume in toto due to the presence of multiple hypodense cystic formations about 2 cm in diameter, having a thin connective hyperdense wall and diffuse calcifications. The Image 2 shows the pancreatic gland at spiral CT without contrast medium that appears increased in size with honeycomb aspect. Multiple peripheral and central calcifications are also present. The Image 3 (spiral CT with contrast medium) shows the presence of hyperdense septa within the pancreatic gland. This examination was similar to the previous one. 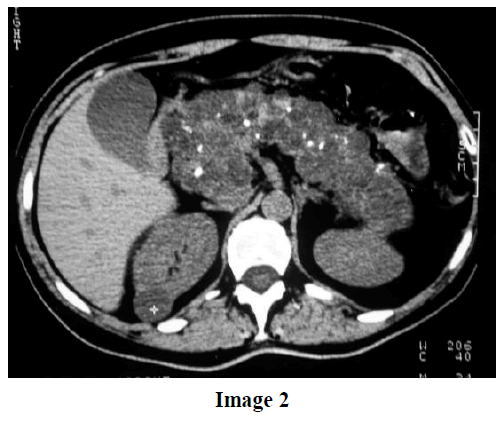 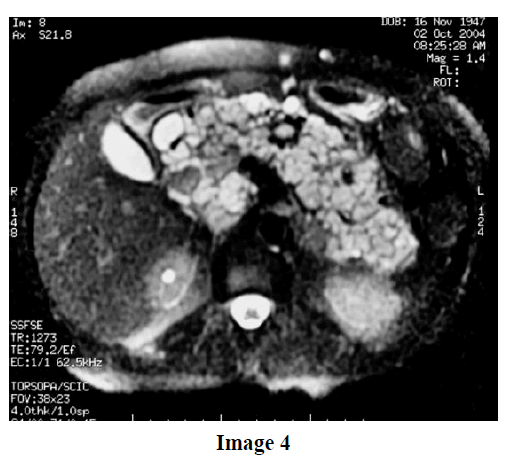 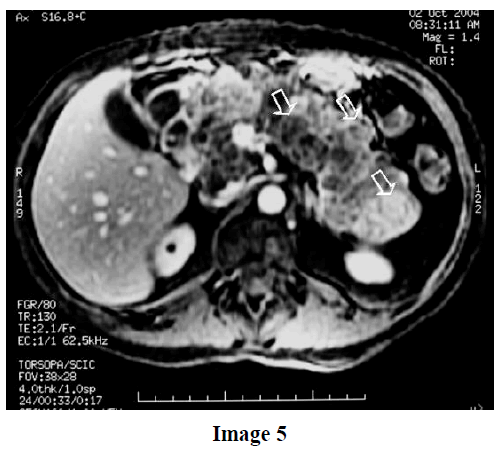 On the basis of patient history, the patient was affected by Von Hippel-Lindau disease and was without abdominal pain, the pancreatic lesions detected at imaging techniques were diagnosed as multiple serous cystic tumors. A further clinical and radiological follow-up was planned; four years after the diagnosis, the patient is still alive, in good general condition and the pancreatic lesions remain unmodified.

The main clinical and radiological findings of Von Hippel-Lindau syndrome can be grouped into five types:

b) renal lesions which include both simple and complicated renal cysts (50-70%) [5], renal angioma and renal carcinoma (20-50%) [5]. The more frequent histological form is represented by clear cell carcinoma which, in most cases, is multifocal and involves both kidneys. The onset of renal tumors represents the main cause of death in Von Hippel-Lindau syndrome (about 70%); hence, the importance of an early diagnosis followed by a possible partial nephrectomy in order to avoid dialysis and renal transplantation [4, 6];

c) pheochromocytoma which is found in about 10-20% [5] of the patients, it is more likely to arise in younger subjects and can be bilateral. The diagnosis is based on the association of high urinary values of catecholamine along with an ultrasound evaluation, CT and MRI;

d) simple cysts can, in fact, be found in other organs: cystadenoma of the epididymis and endolymphatic tumors of the inner ear [4];

Pancreatic lesions are rather common and they are always associated with renal lesions [5] as is seen in our case. The simple cysts are clinically symptom-free; nevertheless, they can determine local compressive effects, particularly at the level of the common bile duct. At CT examination, these lesions appear as a honeycomb lesion due to small multiple cystic formations with enhancing septa and diffuse central or peripheral calcification. The multiple cystic lesions appear clearly hypodense without contrast medium and they do not show any significant enhancement after contrast medium administration.

At MRI examination, the cystic lesions appear hypointense in the sequences weighted in T1, while in the T2 sequences, once weighted, they reveal a high and homogeneous intensity of the signal. An important finding of an MRI is that the cystic lesions, which typically show a different protein content, also show a different intensity of the signal with respect to the quantity of proteins. The cystic tumor therefore appears inhomogeneous hypointense in the sequences weighted in T1 and inhomogeneous hyperintense in the weighted T2.

The differential diagnosis between the simple cysts and the serous microcystic tumors is often difficult but the integrated use of the CT and the MRI may help in recognizing some diagnostic aspects present in the various cystic lesions. At CT, non-complicated simple cysts do not show an enhancement of the wall after the use of a contrast agent, while serous cystic tumors show visible enhancement of the cystic wall and possible central and/or peripheral calcifications [8].

Other pancreatic lesions are represented by non-functioning neuroendocrine tumors which, however, appear as voluminous solid masses or mixed solid-cystic lesions in which the cystic component is represented by a tumoral degeneration or an intra-tumoral hemorrhage; the calcifications in nonfunctioning neuroendocrine tumors are much greater than those of serous cystic tumors.

In conclusion, a well-planned diagnostic approach to pancreatic lesions in the Von Hippel-Lindau disease requires a dedicated radiologist capable of reaching a correct diagnosis by using the integrated CT and MRI findings in order to help the surgeon to operate only on those lesions which require removal due to their malignancy. This was the case of our patient in whom the association of the clinical picture and the typical radiological aspects of the pancreatic lesions suggested a 'wait and see' strategy.