Pancreatic Metastasis from Colon Carcinoma Nine Years after a Hemicolectomy Managed by Distal Pancreatectomy. A Review of the Literature Regarding the Role and Outcome of Pancreatic Resection for Colorectal Metastasis

Context Pancreatic metastasis from colorectal malignancy is rare and accounts for less than 2% of all pancreatic metastases. A case of colonic metastasis to the pancreas is reported and the literature is reviewed to assess the role and outcome of pancreatic resection for metastatic tumors from colorectal malignancy. Case report A 58-year-old female underwent an emergency left hemicolectomy for an obstructing descending colon growth. The lesion was reported to be adenocarcinoma, Dukes C, with involvement of the serosa and 3 lymph nodes. A postoperative staging CT scan showed no other metastases and she received 6 cycles of FOLFOX chemotherapy (folinic acid, 5-flurouracil and oxaliplatin). Nine years after the colectomy during a routine follow-up, there was a sudden rise in her CEA levels. A CT scan revealed a 6.8x4.8 cm mixed consistency lesion in the tail of the pancreas which, on fine needle aspiration cytology, was confirmed to be adenocarcinoma. She underwent a distal pancreatectomy, and histopathology of the resected specimen confirmed a metastatic tumor from colon cancer. She then received 5 cycles of adjuvant chemotherapy. She was symptom free for nine months and subsequently succumbed to recurrent disease. Conclusion Pancreatic metastasis from colorectal malignancy is rare. These patients could be asymptomatic in 17% of cases. The time-interval between the diagnosis of colorectal cancer and the detection of pancreatic metastasis varies widely but is approximately 24 months. The median survival time for postpancreatic resection is 16 months. Pancreatic resection appears to offer good palliation until recurrence of the disease occurs and the possibility of long term cure is rare.

The pancreas is an uncommon location for a solitary metastasis from other primary cancers [1]. In a large autopsy series, the prevalence of pancreatic metastasis was described to from approximately 6 to 11% [2]. The metastases are usually from a primary tumor of the kidney, lung, breast, gastrointestinal tract (stomach, small bowel and colorectum) or melanoma [3]. Reports of a solitary resectable pancreatic metastasis from colorectal cancer are rare [4, 5, 6]. In a recent review, only 24 cases of colorectal metastases to the pancreas were reported and, among these metastases, those from the colon were more frequent than those from the rectum (17:7) [7]. While some of the metastases from colorectal cancer to the liver and lung are being successfully treated by resection, the benefit of pancreatic resection appears unclear [5, 7].

On August 2000, a 58-year-old female presented with large bowel obstruction, secondary to a malignant growth in the descending colon. She underwent an emergency left hemicolectomy and made an uneventful recovery. Histology showed moderately differentiated adenocarcinoma involving the serosal fat. The resected margins were free of tumor; however, 3 of the 18 regional lymph nodes were positive. The pathological staging was T3 N1 M0 and she received adjuvant chemotherapy which involved 6 cycles of FOLFOX chemotherapy (5-flurouracil and folinic acid and oxaliplatin). She was monitored regularly with ultrasound of the abdomen, carcinoembryonic antigen levels biannually and colonoscopy yearly for 2 years. The ultrasound of the abdomen was normal, carcinoembryonic antigen levels ranged between 2.2 and 4.7 μg/L (reference range: 0-2.5 μg/L) and colonoscopy showed small polyps which were benign. In March 2009 there was a sharp rise in carcinoembryonic antigen levels to 25 μg/L associated with a vague backache. A CT scan of the abdomen revealed a mixed density mass lesion with soft tissue and cystic components, measuring 6.8x4.8 cm in the area of the tail of the pancreas with possible left perinephric fat infiltration (Figure 1). No other metastasis was detected. A CT-guided biopsy suggested the possibility of adenocarcinoma. In April 2009, she underwent an exploratory laparotomy which revealed that the tumor in the distal pancreas was infiltrating the perinephric fat, the posterior wall of the stomach and the great omentum. She underwent a distal pancreatectomy and excision of the involved segment of the stomach, omentum and perinephric fat (Figures 2 and 3). Histology was reported as moderately differentiated adenocarcinoma with infiltration into the perinephric fat and the resected segment of the stomach. The adenocarcinoma was metastatic tumor from the colon confirmed by its histological appearance and strong positivity to cytokeratin 20 (Figures 4 and 5). The margins of the resected pancreas and stomach were clear of the tumor. She made an uneventful recovery. She received palliative chemotherapy in the form of 5 cycles of 5- flurouracil, oxaliplatin and bevacizumab. In October 2009, she presented with a mass in the left hypochondrium which on CT of the abdomen was found to be recurrent disease. She was provided care for the terminally ill and she ultimately died in January 2010, nine months after the resection of the metastatic tumor. 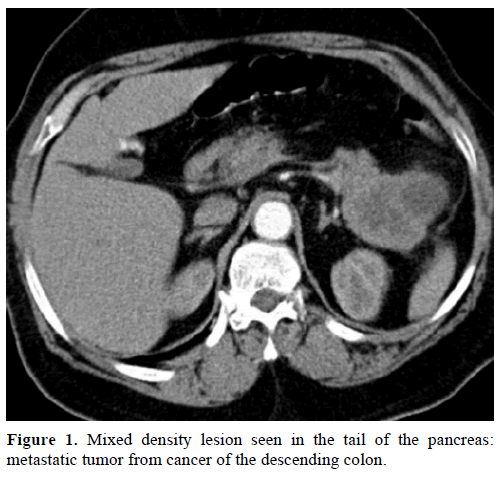 Figure 1. Mixed density lesion seen in the tail of the pancreas: metastatic tumor from cancer of the descending colon.

Figure 2. Distal pancreatectomy specimen with a metastatic pancreatic tumor from cancer of the descending colon. Figure 3. Cut section of the distal pancreatectomy specimen revealing the cystic necrotic center of the metastatic tumor from cancer of the descending colon. Figure 5. Metastatic adenocarcinoma of the pancreas positive for cytokeratin 20, confirming the colon as the primary site o the tumor.

The time interval between the diagnosis of colorectal cancer and the detection of pancreatic metastasis varies widely [7]. Although a long disease-free interval may be frequent for renal cell carcinoma, it is unusual for colon cancer [7, 8]. The median interval in a recent review of 24 cases for colorectal metastasis to the pancreas was found to be 24 months in sharp contrast to metastasis from renal cell carcinoma where it was 120 months [7, 8]. The interval of 9 years in our patient was the second longest interval, following another report of 11 years [11]. Synchronous pancreatic metastasis from colorectal cancer is rare [7].

Metastasis to the pancreas can be completely asymptomatic as has been documented in 35% of patients with metastasis from renal cell carcinoma [8]. However, in patients with metastasis from colorectal cancer, the rate of being asymptomatic is approximately 17% (4/24 cases) [7]. Metastasis in these asymptomatic patients is likely to be detected when a patient with previous colorectal cancer is found to have rising CEA levels during follow-up and, on further investigation, a pancreatic mass is detected [5, 6]. Investigations of a pancreatic mass both in symptomatic and asymptomatic patients would include abdominal ultrasonography and a CT scan which could reveal a hypodense lesion [8, 10]. While a contrast CT scan in renal cell carcinoma metastasis had either intense homogenous enhancement (in small lesions) or rim enhancement (in large lesions), with colorectal metastasis there was no difference in the outer region of the metastasis and the adjoining pancreatic tissue while the inner areas showed hypo-enhancement due to central necrosis [10]. Endoscopic ultrasound can b particularly useful for lesions in the head of the pancreas which would reveal a hypoechoic mass in comparison to the adjacent pancreatic tissue [11]. However, in view of the diagnostic difficulties in individual cases, many authors recommend establishing tissue diagnosis with fine needle aspiration biopsy which could be guided either by US, CT or endoscopic ultrasonography [8, 12]. Endoscopic ultrasonography assisted by fine needle aspiration cytology has been reported as a safe and minimally invasive method for diagnosing non-primary neoplasms [8, 12]. An accurate diagnosis is further facilitated by careful evaluation of the clinical history, cytomorphology and ancillary techniques, especially of those applied to cell block material including immunohistochemistry [8, 12]. The above investigations facilitate definitive tissue diagnosis and establish an assessment of resectability.

However, the need for a pretreatment tissue diagnosis of pancreatic tumors has been controversial. Although the predominant tissue type of a solid tumor is adenocarcinoma, tumors with cystic components, as in our patient, could represent other pathologies including metastatic tumor, serous cystadenoma, mucinous cystadenoma and intraductal mucinous neoplasia. While there are some who believe a negative biopsy would not change management in terms of resection, a tissue diagnosis could prove malignancy before a major operation, exclude unusual histology and possibly provide the surgeon and the patients with a strong rationale for taking an aggressive intraoperative approach. The risk of peritoneal seeding following fine needle aspiration cytology, though potential, is very minimal compared to that following a trucut biopsy. This is further reduced with endoscopic ultrasoundguided fine needle aspiration cytology feasible in pancreatic head lesions. Recently, 18-flurodeoxyglucose positron emission tomography has been reported to be useful not only in detecting pancreatic metastases but even in detecting incidental colon cancer while staging a pancreatic mass [7, 12, 13, 14]. The role of pancreatic resections for metastatic colorectal tumors is not well defined due to a paucity of such cases reported in the literature. Among the 28 cases reviewed (Table 1), the resections included pancreaticoduodenectomy, pylorus-preserving pancreaticoduodenectomy, distal pancreatectomy and palliative gastrojejunostomy in 11, 5, 11 and 1 patients, respectively. The primary tumor was located in the colon and rectum in 20 and 8 patients, respectively (Table 1). In a recent review, solitary pancreatic metastases were present in 17 patients, and 7 had other metastases which required an associated surgical procedure [7]. No perioperative mortality was reported in these patients [7]. Sixteen patients died from recurrent disease, the median survival time being 16.5 months (range 8-105 months) [7]. Only 5 studies reported cases of disease-free survival which ranged from 1.5 to 43 months (median 10 months) [14, 15, 16, 17, 18]. However, symptomatic patients had complete relief of symptoms (pain and jaundice) after surgery and continued to do so until recurrence of the disease [7]. However, the question arises as to whether these patients should be managed by a more conservative approach, such as chemotherapeutic management, and whether it may offer the same results as pancreatic resection with less morbidity. What makes this decision more difficult is the fact that the natural history of untreated patients with pancreatic metastases from colorectal cancer is unknown. Therefore, it is impossible to compare the survival rate of resected and unresected patients treated with surgical and chemotherapeutic agents as sufficient information about them is not yet available. The chemotherapeutic agents generally used would include 5-flurouracil, oxaliplatin and folinic acid (FOLFOX) or 5-flurouracil and folinic acid with irinotecan included (FOLFIRI) [3, 5, 14, 19, 20]. The response of the recurrent disease to chemotherapeutic agent is rarely reported; however, in one report, it was observed in only 1 of the 9 cases treated [7]. Chemotherapy does not generally provide the same encouraging results in pancreatic metastasis from colorectal cancer as are obtained in liver metastasis [7].

A review of the literature suggests that, while longterm survival following pancreatic resection for metastatic colorectal cancer is unlikely, a good quality of life is reported by most authors until recurrence occurs. Added to this is the fact that there were no perioperative mortalities [3, 4, 5, 6, 7, 15, 16, 17, 18, 19, 20, 21, 22, 23, 24] and the morbidity reported was minimal [4, 15, 17, 19, 20, 22, 23, 24]. In one report in a patient with metastasis in pancreatic divisum, where only gastrojejunostomy was performed without a resection, the patient died in 5 months [9]. The median survival of patients following resection however has been reported to be 16.5 months [7]. Hence it is reasonable to believe that resection of a pancreatic metastasis from colorectal cancer is only a palliative procedure with long-time survival being an exceptional event. This is true both for solitary pancreatic metastases and for associated extrapancreatic tumor relapses. Good palliation and acceptable survival may be achieved even when a resection may involve both pancreatic and limited extrapancreatic masses when performed in patients with a good performance status.

Metastases to the pancreas from colorectal cancer are rare. They should be suspected in a patient presenting with a pancreatic mass following a previous colorectal resection for colonic malignancy especially if the CEA levels rise during follow-up. The usual interval between colorectal surgery and pancreatic metastasis is short, and a long duration of more than five years is exceptional. In the absence of widely metastatic disease, an aggressive surgical approach may offer good palliation and may play a role in the multimodality management of colorectal cancer.