Plasmodium Vivax Malaria: An Unusual Cause of Acute Pancreatitis

Plasmodium vivax malaria traditionally thought to be benign, nowadays is often diagnosed in patients with a myriad of systemic complications like cerebral malaria, acute respiratory distress syndrome, acute kidney injury, acute pancreatitis, hepatic dysfunction, disseminated intravascular coagulation, etc which were earlier attributed only to plasmodium falciparum. Hence timely intervention and expert care should be undertaken for vivax patients so that the mortality and morbidity associated with this form of malaria can be reduced.

Malaria being one of the most important parasitic diseases of humans, is a very common cause of febrile illness in tropical countries. Till now complications were more commonly attributed to infection with Plasmodium falciparum and less commonly with Plasmodium vivax. Association of acute pancreatitis with parasites like Toxoplasma, Cryptosporidium, Ascaris lumbricoides and Clonorchis sinensis has been previously reported [1, 2] but rarely with P. vivax. We report a case of acute pancreatitis in a 23-year-old male who was diagnosed with Plasmodium vivax infection, was treated conservatively and discharged after 10 days of hospitalization in a stable condition.

Malarial parasite quantitative buffy coat (MPQBC) test was performed in the emergency which was positive for P. vivax. Subsequently, peripheral blood smear thin film examination also revealed schizonts of P. vivax. Typhidot was negative for salmonella typhi. Patient was started on artemesin based combination therapy (ACT), antipyretics and intravenous fluids. On 3rd day of hospital stay, he complained acute onset pain in abdomen localized to epigastrium and umbilical region. On examination, abdomen was soft, but tenderness was present in the epigastrium.bowels sounds were 4-5/min, no free fluid or organomegaly was noted. An erect x-ray abdomen was done which was normal. The serum amylase was 955 U/L (reference range: 10-200 U/L) and serum lipase was 288 U/L (reference range: 10-80 U/L). Ultrasonography of abdomen revealed a bulky pancreas, no gallstones, ascites or splenomegaly was seen. A contrast-enhanced computed tomography (CT) scan of the abdomen was done which was suggestive of diffuse pancreatitis with modified CT severity index of 6 as shown in Figure 1. A diagnosis of P. vivax associated acute pancreatitis was made. Patient was managed conservatively with intravenous fluids, analgesics and imipenem-cilastin 500mg thrice daily which was continued for 7 days along with artemesin combination therapy for 7 days. Patient recovered completely and was discharged on 10th day of admission in a stable condition with 14 days of primaquine therapy for radical cure of P. vivax. 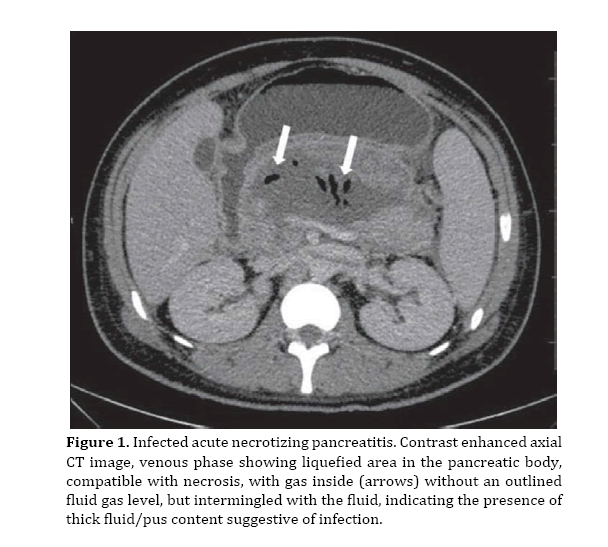 Malaria is a major public health problem in India, accounting for sizeable morbidity and mortality. Benign tertian malaria, the term commonly implicated with P. vivax mono-infection is now in oblivion [3, 4, 5, 6]. Recent studies have shown that 11% of severe malaria are because of P. vivax monoinfection [7]. However pancreatitis as a complication of P. vivax infection is extremely rare [4]. Though the exact pathogenesis of pancreatitis is still not clear it can be hypothesised that it may be due to ongoing pancreatic injury due to systemic infestation or direct invasion of the pancreatic tissue by P. vivax through mechanisms of cytoadherence and sequestration [8, 9]. It has also been proposed that acute pancreatitis may be due to multi organ failure or capillary thrombosis caused by parasitized red blood corpuscles [10, 11].

In our case the patient did not have typical presenting signs and symptoms of acute pancreatitis on day 1 of admission. There was no evidence of alcoholism, gall stones, any structural anomaly of the pancreas, drugs, trauma, or any metabolic abnormality leading to pancreatitis in our patient and hence diagnosis of malaria induced pancreatitis was justified. Values of serum amylase and lipase (serum lipase is a more specific marker) three times the upper limit of normal along with contrast enhanced CT (CECT) abdomen suggestive of pancreatic inflammation, peripancreatic fluid collection or pancreatic necrosis are diagnostic of acute pancreatitis. In our case on CECT abdomen there was no evidence of any gallstones or any ascites but there was peripancreatic fluid collection and pancreatic necrosis <30 % with a modified CT severity [12] of 6 (moderate acute pancreatitis).

This report highlights the current changing spectrum of P. vivax infection which was earlier not considered to be malignant. Patients diagnosed as a case of P. vivax malaria should be watched carefully, as the complications may not be apparent at the time of presentation always. As pain abdomen in such patients can rarely be either due to gastrointestinal haemorrhage [13] or acute pancreatitis, a meticulous clinical workup can be life saving.

The authors had no conflicts of interest.