Aim Acute pancreatitis frequently involves peripancreatic tissues and remote organ systems resulting in severe complications and high risk of mortality. Therefore, the present study was carried out to assess the effect of omental flap as a new treatment of acute pancreatitis. Methods Ten mongrel dogs with experimentally induced acute pancreatitis were randomly divided into two equal groups; treated and control groups. The pancreas was wrapped with omental flap in the treated group and the pancreas was left without treatment in control group. Urea, Creatinine, lactate dehydrogenase, serum Amylase, Ca, and C-reactive protein were measured in all dogs before surgery and 2 hours, 3 days, 7 days, and 4 weeks post-surgery. Weekly ultrasound examination was performed post-surgery. Exploratory laparotomy was carried out 45 days post-surgery, all findings were reported and pancreatic biopsies were collected and prepared for histopathological examination using Schmidt Scoring system. Data were displayed as the mean ± SD and SPSS was used. Statistical significance (at P < 0.05) was calculated by χ2 test. Results There was a significant difference between the two groups in favor of the treated group as regards levels of lactate dehydrogenase, ultrasonographic findings, pathological findings and Schmidt scoring. Conclusion Omental flap can be used as a new minimally invasive effective technique for treatment of acute pancreatitis.

Pancreatitis can either be acute or chronic in nature. However, acute pancreatitis does not typically progress to chronic pancreatitis unless it is accompanied with other conditions, such as pancreatic hypertension or occlusions resulting from scarring [1].

Nowadays, both forms of human pancreatitis are increasing due to the high incidence of gallstones and alcohol abuse [2, 3].

Acute pancreatitis is a common cause of abdominal pain with a short time for diagnosis and treatment. In addition, it is a potentially life-threatening disease which is characterized by a systemic inflammatory response that may result in multiple organ failure [4-6].

The extent of pancreatic necrosis, infection and sepsis are the main determinants of mortality in acute pancreatitis [2].

The major pathological findings in acute pancreatitis are inflammation, edema and necrosis of the pancreatic tissue together with inflammation and injury of extra pancreatic organs.

Several treatment options for the early management of acute pancreatitis have been tested, including the use of enteral nutrition and antibiotics as well as novel therapies such as haemofiltration and protease inhibitors. Over the last decade minimally invasive techniques have been increasingly used for the treatment of infected pancreatic necrosis as 'step-up approach' and minimally invasive necrosectomy [9, 10].

The omentum is an ideal tissue to protect an anastomosis or suture line by preventing early anastomotic leakage and providing a source of granulation tissue and neovascularization for healing. Omentum was firstly used to plug a perforated gastric ulcer and to protect various intestinal anastomoses [11-13]. Then, the omentum has been used in various experimental and clinical studies. Therefore, the rationale of the present study was to assess the omental flap as a new line for treatment of severe acute pancreatitis in experimental dogs.

Ten mongrel dogs of sexes, aged 1-3 years and weighted 15-25 kg were included in this study. Induction of severe acute pancreatitis was carried out in all dogs. Then the dogs were randomly divided into 2 groups (5 dogs each) according to the treatment. Omental flap was used in the treated group (group I) while control group (group II) received no treatment.

Middle median laparotomy was carried out and the initial part of the duodenum was exteriorized through the abdominal wound. The pancreas was isolated by sterile towel (Figure 1a), the pancreatic duct was cannulated using #20 i/v cannula (Figure 1b) and 10 ml of oleic acid was injected into the pancreatic tissue [14] (Figure 1b) for induction of pancreatitis. A window was created in the mesentry and the pancreas was wrapped by omental flap (Figure 1c) in 5 dogs (group I). The omental flap was sutured to the duodenal wall by polyglactin 910 suture material # 2/0 using simple interrupted pattern. In group II, no omental flap used. The peritoneum and abdominal muscles were closed routinely by simple interrupted polyglactin 910 suture materials # 0, subcutaneous tissue was closed by simple continuous pattern with polyglactin 910 suture materials # 0 then the skin was sutured by simple interrupted using naylon # 0. 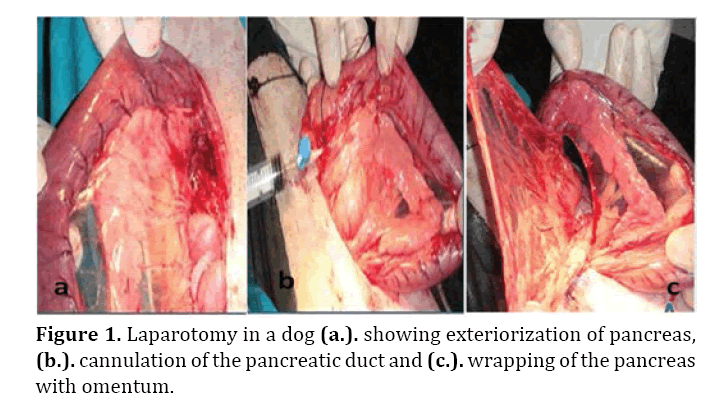 Figure 1. Laparotomy in a dog (a.). showing exteriorization of pancreas, (b.). cannulation of the pancreatic duct and (c.). wrapping of the pancreas with omentum.

The survived dogs were followed up with biochemical markers including; urea, creatinine, lactate dehydrogenase (LDH), serum amylase, calcium (Ca), and C-reactive protein (CRP) before the operation and 2 hours, 3 days, 7 days, and 4 weeks post-surgery.

Under the same general anesthesia, exploratory laparotomy in the survived dogs was carried out 45 days postoperative. All gross findings were recorded and pancreatic biopsies were collected. Closure of the abdominal wound and post-operative care were carried out as aforementioned.

The pancreatic specimens were preserved in 10% neutral buffered formalin solution. Tissues were processed by conventional methods, sectioned at 4-6 microns and stained with hematoxyline and eosin [16]. The pancreatitis pathology score was determined for each dog according the Schmidt Scoring [17].

In treated group (I), the operated dogs had normal appetite at the third day of operation. Neither abdominal pain nor abnormal clinical signs were observed.

Laboratory results showed no significant difference (P<0.05) between the two groups except for serum LDH. LDH was persistently lower in group I than in group II (Table 1). 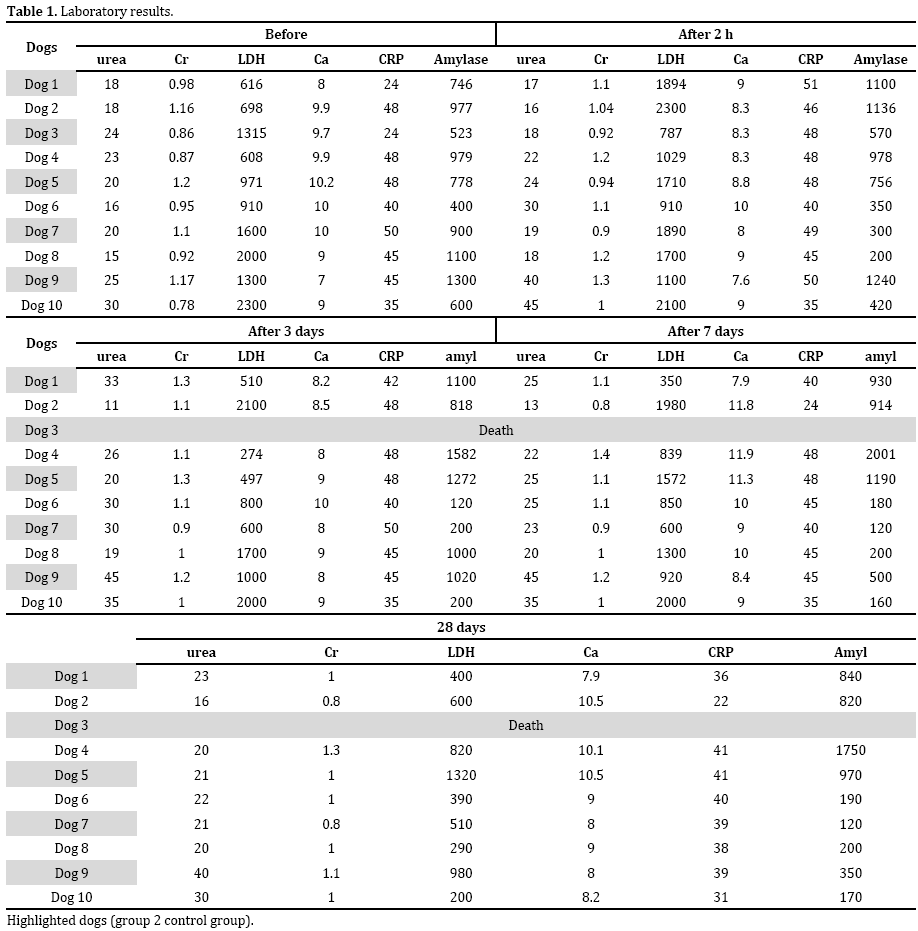 During the first 3 weeks, the pancreas appeared as an enlarged hypoechoic mass with hyperechoic areas located in between the intestinal loops in both groups (Figure 2). Time dependant decrease and increase in the pancreatic echogenicity was noticed in group I and II, respectively. The pancreas could not be imaged at 28±3 days post-surgery in group I. Other ultrasonographic findings included; hyperechogenic peripancreatic fat and anechoic peripancreatic abdominal fluid more in group I. In control group (II), severe adhesion at the operation site, severe congestion of the omentum, and pancreas, pancreatic nodularity, severe pancreatitis, pancreatic necrosis and severe adhesions between the pancreas and stomach, liver, small intestines and abdominal wall were also seen (Figure 3b).

Schmidt Score was 3-4 in group I and 9-12 in group II. Group (I) showed statistically significant lower scores in each aspect as well as total score than group (II) (P<0.001) as shown in Table 2. 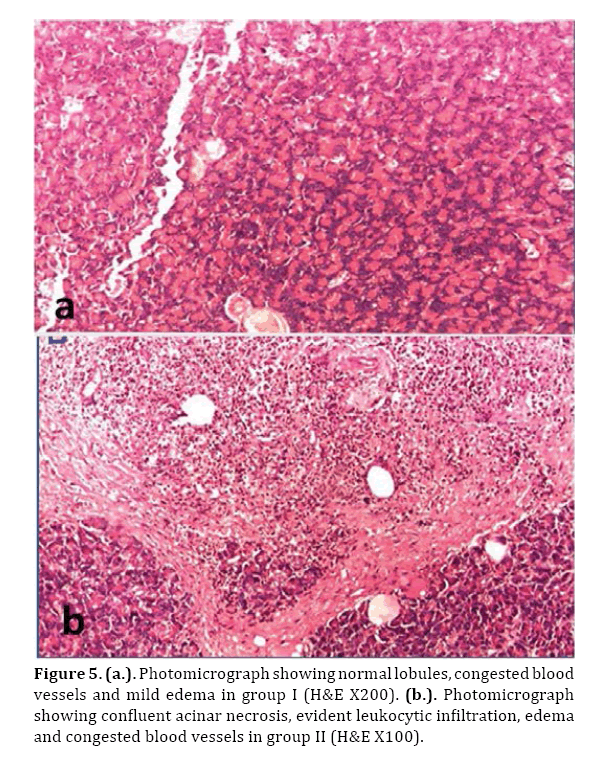 In the control group (II), marked pancreatic pathological changes in the form of edema, hemorrhage, evident leukocytic infiltration and areas of confluent necrosis were seen (Figures 4b & 5b).

Acute pancreatitis remains a serious disease that is characterized by a pancreatic inflammatory process with possible peripancreatic tissue and multi-organ dysfunction syndrome.

The majority of patients present with a mild pancreatitis, however approximately 20% run a severe course and require appropriate management in an intensive care unit [18].

Considering the rapid course of the disease and the relative inaccessibility of pancreas in human, experimental acute pancreatitis and various potential therapeutic interventions were carried out in animal models. In this study, the rationale of the use of omental flap was carried out in dogs as mentioned before [14].

Although all of the operated dogs were given antibiotic and anti-inflammatory drugs to control the abdominal pain and post-operative sepsis, dogs of the control group had fever, tachycardia, and various degrees of abdominal pain for five days post-operative with two mortality due to severe acute pancreatitis and multiorgan failure. In this respect, acute pancreatitis has a mortality rate of 5-10%. Early deaths are mainly due to multiorgan failure and late deaths are due to septic complications from pancreatic necrosis [19].

In the present study, most of the tested biomarkers were measured. All of these biomarkers were higher in the control group than treated one which indicates severe acute pancreatitis. Similar findings were previously reported [19-21]. There was a significant difference between the two groups in favor of the treated group as regards levels of LDH.

Ultrasonography of normal pancreas is difficult due to ultrasound wave propagation interference by adjacent bowel gas but in the present study, it appeared as an hypoechoic to hyperechoic mass due to severe inflammation, edema, necrosis and fibrosis. Time dependant decrease and increase in the pancreatic echogenicity was observed in group I and II respectively, depending upon the severity of pancreatitis, pancreatic edema, hemorrhages, necrosis and fibrosis. Therefore, ultrasonography is a helpful method for diagnosis and prognosis of pancreatitis in dogs.

In the control group, acinar necrosis, interstitial edema, leukocytic infiltration and hemorrhage were evident. There are several reported mechanisms for these pathological changes. Intracellular activation of proteolytic enzymes induces pancreatic tissue damage in the presence of intracellular lysozyme enzymes and activation of trypsinogen to trypsin. Trypsin in turn activates phospholipases, elastases and other mediators with increased neutrophil migration to the pancreas. Consequently various inflammatory cytokines release and play a pivotal role in pathogenesis of acute pancreatitis [21, 22]. In addition, inflammatory mediators may also affect intestinal microcirculation with damage of microvilli allowing endotoxin and bacterial translocation into the systemic circulation and hence increase the mortality rate [23-26].

Pancreatic necrosis developed due to various factors including; ischemia, lysozyme enzymes, vasoactive mediators and reactive oxygen species. It is associated with increasing risk of infection and mortality rate [27-29].

As regard the group treated with omental flap, the recorded scores were significantly lower than those recorded in control group. This group showed total absence of acinar necrosis and mild interstitial edema with inflammatory cell infiltrate which represent mild pancreatitis.

It is, best known to our knowledge, that this is the first time to use omentum in treatment of severe acute pancreatitis.

The question now is how such marked difference in the recorded scores between the studied groups could occur.

There are several possible mechanisms played by the omentum to ameliorate or even hinder the process of pancreatitis itself.

The omentum adheres to and seal off areas of contamination with a layer of fibrin at the point of contact. Within few days, the fibrin begins to organize with the development of new blood vessels and fibroblasts [30].

In addition, the omentum is known to be rich in lymphatic and blood vessels that can absorb inflammatory exudates, clear bacteria and foreign material from the peritoneal cavity and prevent further spreading of local infection [31]. Beside this, It has long been recognized that the omentum promotes angiogenesis in the adjacent structures to which it is applied. This neovascularization allows the omentum to provide vascular support to the adjacent tissues and promote function and healing in the ischaemic or inflammed tissue [23, 32, 33].

In the present study, we reported our experience with the use of omental flap as a minimally invasive new technique for treatment of severe acute pancreatitis in dogs and further study on human should be considered.

In conclusion, omental flap is an effective in minimizing the inflammatory reaction and decrease the incidence of mortality in acute pancreatitis. Minimally invasive technique for treatment of severe acute pancreatitis using omental flaf must be considered in the future researches.

The authors have no conflict of interest.