1Benghazi Center for Diagnosis and Treatment of Diabetes and 2Faculty of Medicine, Benghazi University, Benghazi, Libya

Aim The present study was undertaken to measure Serum Magnesium levels in type 2 Diabetic Libyan patients as there were no studies reported to indicate the status of Mg in these patients. Materials and Methods A total of 100 Libyan patients with type 2 diabetic mellitus (48 women and 52 men) were taken for the present study from Benghazi Center for Diagnosis and Treatment of Diabetes, and 30 apparently healthy age and sex- matched individuals (15 women and 15 men) acted as control subjects. Body mass index, gender, serum magnesium, glucose and glycated hemoglobin levels were measured by standard methods and subjected to specific statistical methods of analyses. Results and Subjects The Libyan diabetics showed marked reduction in serum magnesium levels both in controlled and uncontrolled diabetic subjects compared to normal control subjects. Serum magnesium was significantly negatively correlated with duration of diabetes (r=-0.242, p=0.015), and HbA1c (r=-0.198, p=0.049). There was a near-significant negative association between magnesium and fasting blood glucose (r=-0.174, p=0.084). No significant correlation was seen between serum Mg and age, or BMI. Like other studies there was marked reduction in serum magnesium levels in diabetic Libyan subjects with significant correlation to duration of diabetes and HbA1c levels indicating that serum Mg levels may be a biomarker of duration and glycemic control in diabetic patients.

Total magnesium (Mg) exists in three different forms, a protein-bound form, complexed one and as a free cation [1]. Intra cellular magnesium is the most abundant form which as a cofactor for many enzyme reactions [2, 3]. Mg-ATP complex plays an important physiological role in whole body metabolism, muscle contraction, methyl group transfer and few other processes [4]. Magnesium is further needed for insulin signal action, cell proliferation and also for plasma membrane of sodium, potassium and calcium ions. Experimental studies have shown that Mg may be involved in insulin secretion and sensitivity [5]. There is considerable body of evidence to suggest that hypomagnesemia and reduced levels of intracellular magnesium concentrations in diabetics [6]. Patients are considered to have low levels of serum magnesium when its concentration falls below 1.5 mg/dL (hypomagnesemia) and a concentration of ≤1.8 mg/dL as preclinical hypomagnesemia [7]. Increased renal loss of Mg may be witnessed in conditions like diabetes mellitus, renal tubular disorders, hypercalcaemia, hyperthyroidism or aldosteronism or due to prolonged lactation common in Arab population or diuretics use apart from genetic deficiency syndromes [8, 9].

It is reported that type 2 Mellitus (T2DM) is associated with hypomagnesemia due to poor reabsorption and increased excretion of Mg [10]. T2DM is the major health problem in Libyan population [11]. Hence this study was undertaken to evaluate serum magnesium levels inT2DM and correlate the Mg levels with fasting blood glucose, HbA1c in Libyan Type 2 diabetic patients with those of healthy controls.

A total of 100 Libyan patients with type 2 DM (48 women and 52 men) were recruited from the Benghazi Center for Diagnosis and Treatment of Diabetes, and 30 apparently healthy age and sex-matched individuals (15 women and 15 men) were selected from our family members and relatives, to serve as controls.

Informed consent was obtained from all subjects before the study. The diagnosis of diabetes was done on the basis of American Diabetes Association criteria 2006 (i.e. Hb A1c ≥6.5%, or fasting plasma glucose level ≥126 mg/dL, or 2-h plasma glucose ≥200 mg/dl during an oral glucose tolerance test).

The height and weight were measured and obesity was defined as body mass index (BMI) of ≥30 kg/m2, where BMI was calculated by dividing the weight in kilograms on height in meters squared.

The control group consisted of healthy subjects who were not suffering from any acute infection, or metabolic or psychological disorder. They were non-smoker, and non-overweight. They had no history of inherited hypomagnesemia or diabetes mellitus.

The diabetic subjects were divided into good and poor glycemic control groups based on a cut off HbA1c value of 7.5%. Blood glucose, Glycated Hemoglobin (HbA1c) and Magnesium levels were estimated using standard automated methods. 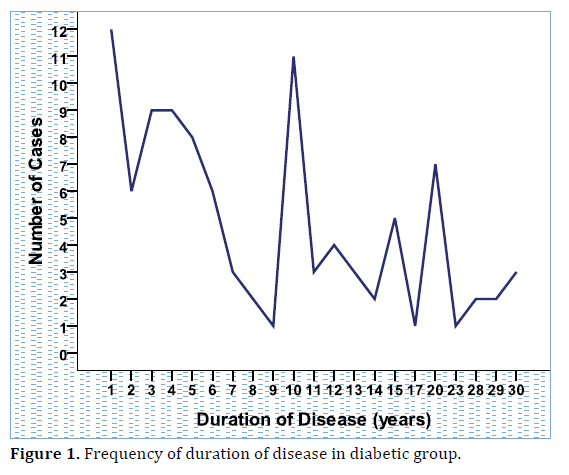 Figure 1. Frequency of duration of disease in diabetic group.

BMI was significantly higher in both groups of diabetics when compared to the normal control group (p<0.05). (Table 1, Figure 2). 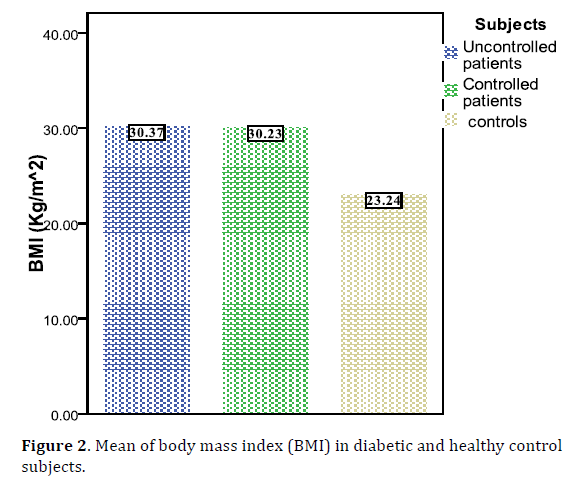 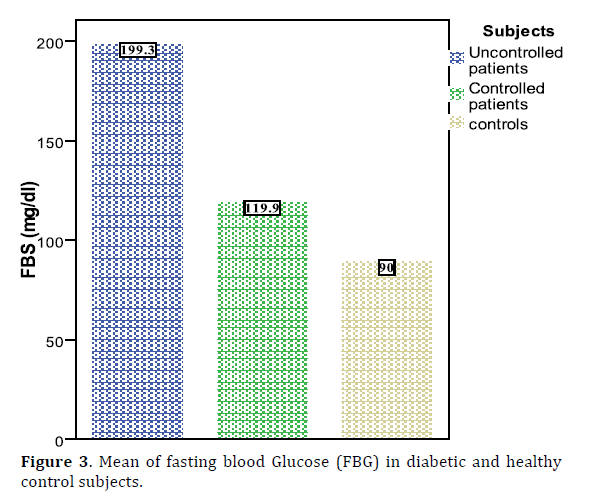 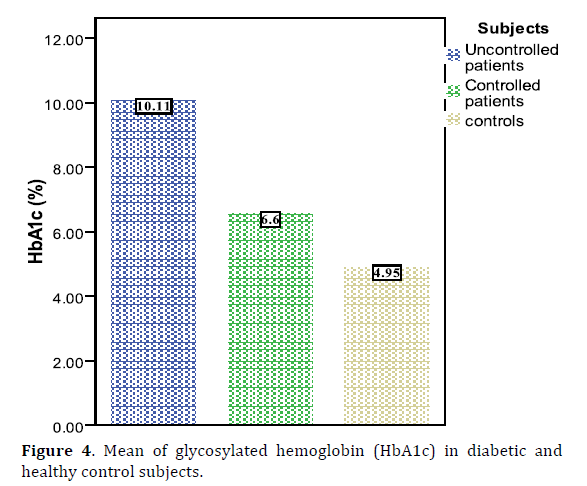 The mean level of the serum magnesium in patients with type 2 DM was lower than that of the control subjects (p<0.05). Comparing serum magnesium levels in controlled diabetic patients and normal control subjects showed nonsignificant differences (p=0.33). There was a significant difference in magnesium levels between normal controls and uncontrolled diabetic patients (p=0.002) (Table 4, Figure 5). 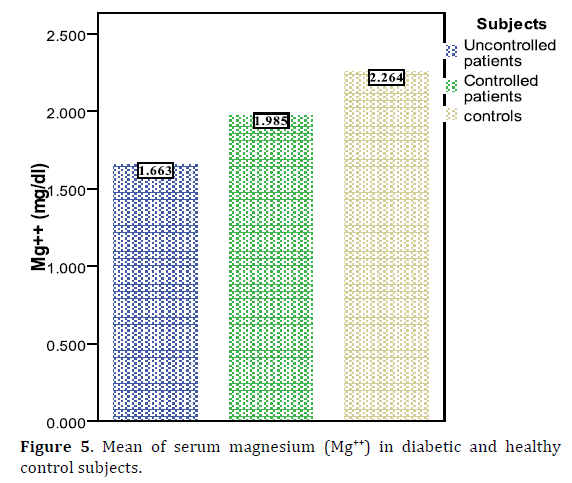 Serum Magnesium Correlations to Other Parameters

Pearson’s correlation analysis of magnesium to age, duration of disease, BMI, FBS, and HbA1c in diabetic group showed that, magnesium was significantly negatively correlated with duration of disease (r=-0.242, p=0.015) (Figure 6), and HbA1c (r=-0.198, p=0.049) (Figure 7). There was a near-significant negative association between magnesium and fasting blood glucose (r=-0.174, p=0.084) (Figure 8). No significant correlation was seen between serum Mg and age, or BMI. 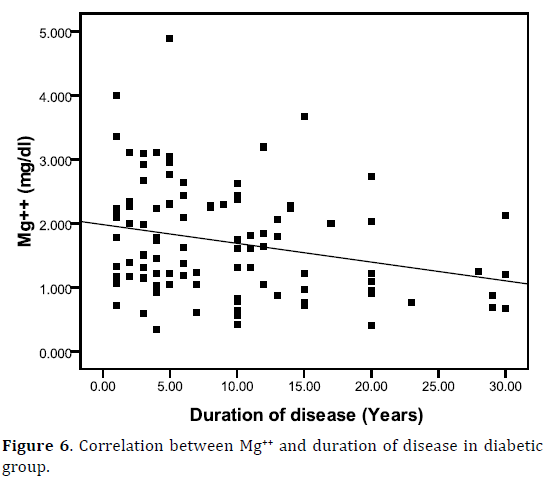 Figure 6. Correlation between Mg++ and duration of disease in diabetic group. 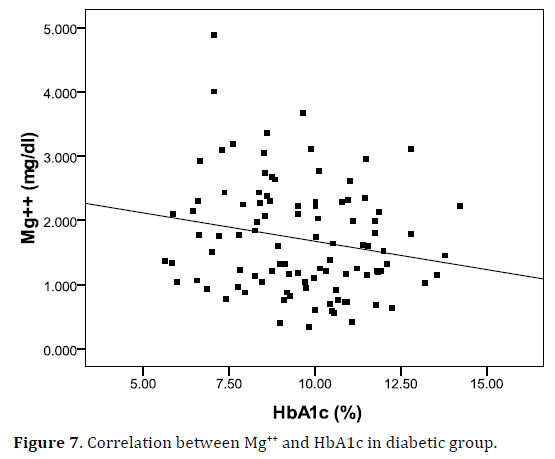 Figure 7. Correlation between Mg++ and HbA1c in diabetic group. 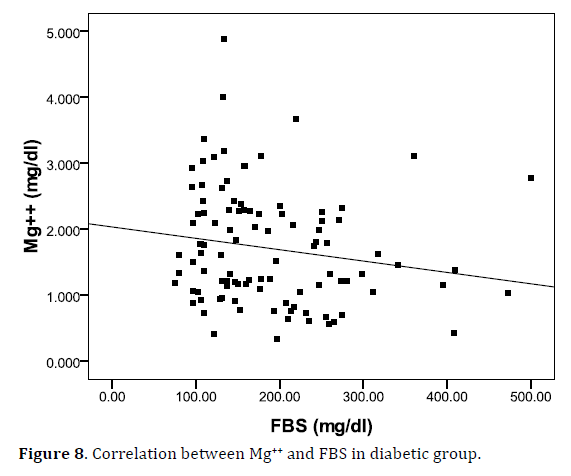 Figure 8. Correlation between Mg++ and FBS in diabetic group.

In non-diabetic control subjects, serum magnesium levels did not show any significant correlations with age, BMI, FBS, or HbA1c.

These findings are consistent with the results of many previous studies [12, 13, 14, 15, 16]. A low Mg intake and an increased Mg urinary loss appears the most important mechanisms that may favour Mg depletion in patients with type 2 diabetes, while Mg absorption and retention of dietary Mg seems not to be impaired in patients with type 2 diabetes [6]. In diabetic patients, the ultra-filterable Mg load may be enhanced by glomerular hyper-filtration and recurrent excessive volume repletion after hyperglycemiainduced osmotic diuresis [14].

In experimental diabetic rats an increase in renal Mg transporters was seen as a compensatory mechanism in the distal renal tubule to handle increased load of Mg. Insulin administration to such rats reduced Mg transporters thereby reducing the renal loss of Mg [17, 18]. In addition ketoacidosis and hypoalbuminemia associated with diabetes enhance Mg excretion [19]. In diabetic ketoacidosis and reduced albumin levels an increase in the ionized form of Mg was reported which results in free Mg load in the distal tubule causing renal loss [20]. The use of loop and thiazide diuretics, often prescribed in diabetic patients with hypertension and/or cardiovascular diseases, also promote Mg loss [21].

Therefore further studies may be necessary to establish the role of Mg in insulin action and therefore its role in diabetes.