Solitary Fibrous Tumor of the Pancreas: Case Report with Cytologic and Surgical Pathology Correlation and Review of the Literature

A 78-year-old woman with a history of polymyalgia rheumatica presented to her primary care physician with chronic back pain. The patient reported increasing fatigue and loss of appetite with a 9 kg unintentional weight loss. Her serum laboratory results were only significant for decreased hemoglobin (9.6 g/dL; reference range: 11.6- 15.4 g/dL), hematocrit (27.6%; reference range: 34-45%), calcium (8.0 mg/dL; reference range: 8.5-10.5 mg/dL), total protein (4.1 g/dL; reference range: 6.0-8.0 g/dL), and albumin (2.1 g/dL; reference range: 3.5-5.0 g/dL). Serum tumor markers (chromogranin, CEA, CA 19-9) were within normal limits. Lumbar CT imaging revealed a pancreatic mass. A dynamic, contrastenhanced CT of the pancreas confirmed a 5 cm solid mass arising from the body of the pancreas with no other significant abnormalities identified (Figure 1a). The mass showed hyper-enhancement on arterial phase imaging. Based upon the tumor location, vascularity and well-circumscribed nature, an endocrine tumor was considered to be the most likely diagnosis. 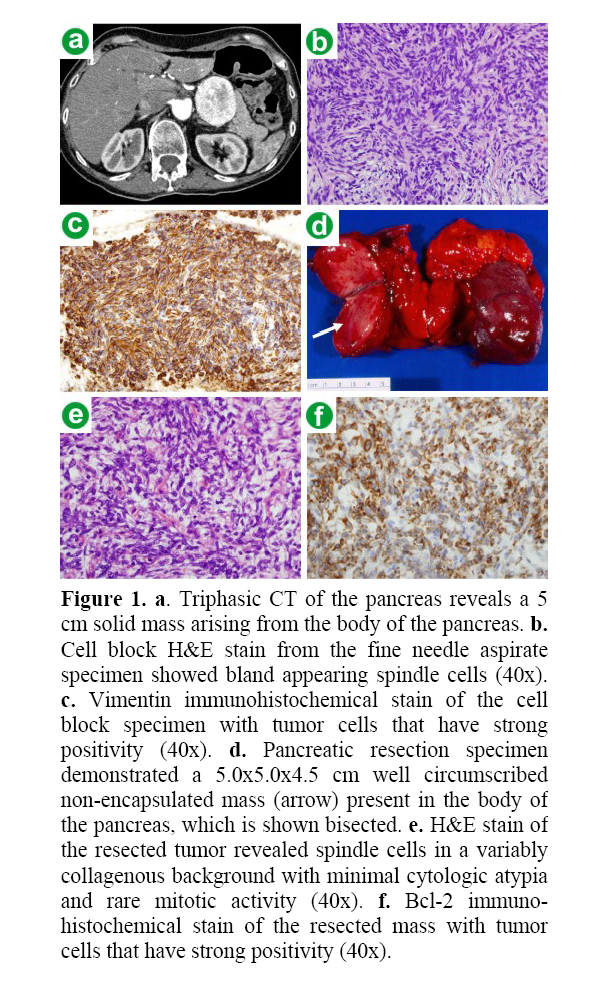 An endoscopic ultrasound with fine needle aspiration was performed to confirm the radiographic findings. A cell block preparation demonstrated bland-appearing spindle cells and an immunohistochemical analysis was performed (Figure 1b). Tumor cells were positive for CD34 and vimentin, and negative for CAM 5.2, CD10, chromogranin, synaptophysin, CD117, desmin, and S100 (Figure 1c). Both cytologic appearance and immunohistochemistry were inconsistent with an endocrine tumor and a diagnosis of benign mesenchymal tumor was given. The patient was taken to surgery and a distal pancreatectomy was performed. The removed portion of pancreas measured 9.2x6.5x4.5 cm and contained a 5.0x5.0x4.5 cm well-circumscribed, non-encapsulated, white mass with a homogeneous, smooth cut surface 0.8 cm from the pancreatic surgical resection margin (Figure 1d).

Histologically, the tumor was composed of haphazardly arranged bland spindle cells (Figure 1e). A background of wispy collagen bands and occasional branched hemangiopericytoma-like vessels were seen. Cytologic atypia, necrosis, and vascular invasion were not identified. Mitotic figures were very rare (less than 1 mitosis per 10 per high-powered fields). No entrapped pancreatic tissue was identified in the tumor. Immunohistochemical stains on the resected tumor revealed lesional cells diffusely positive for CD99, vimentin, and bcl-2, focally positive for CD34, and negative for CD117, desmin, smooth muscle actin, CAM 5.2, CD10, chromogranin, synaptophysin, and S100 (Figure 1f). Based on histology and immunohistochemistry, a diagnosis of solitary fibrous tumor was rendered. Seven months post-operatively, the patient is disease free and has gained 5 kg.

The vast majority of primary pancreatic tumors are adenocarcinomas [6]. Endocrine tumors are uncommon and mesenchymal tumors are even more rare [6]. Mesenchymal tumors of the pancreas include lymphangioma, adenomatoid tumor, hemangioma, schwannoma, perivascular epithelioid cell tumor (PEComa), and solitary fibrous tumor [7]. These behave primarily in a benign manner [7]. Malignant pancreatic mesenchymal tumors such as liposarcoma, leiomyosarcoma, and malignant fibrous histocytoma have also been identified [7]. 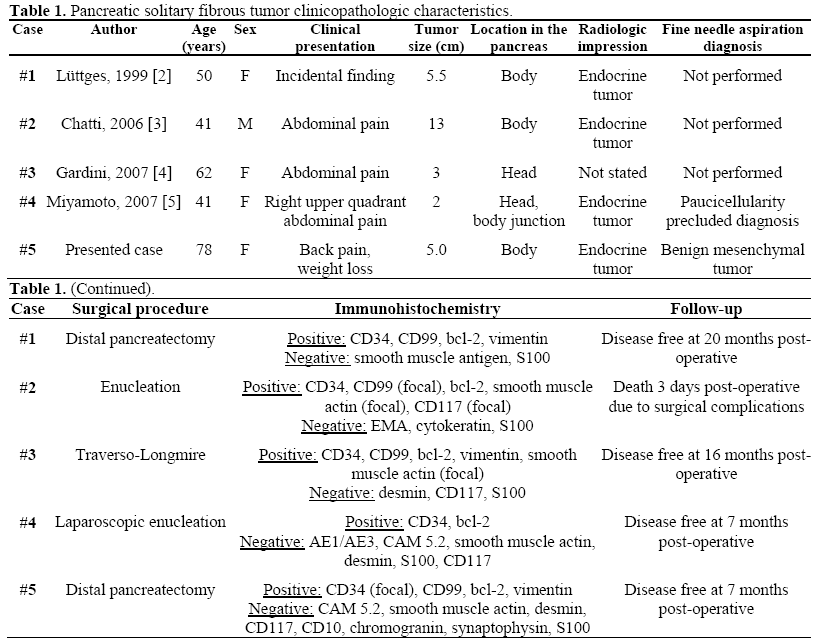 It is significant to point out that our case was diagnosed as a benign mesenchymal tumor based on aspiration cytology. One prior case attempted fine needle aspiration, however, paucicellularity precluded a diagnosis [5]. Histologically, the surgical resection specimens from all five cases were described as being composed of bland appearing spindle cells within a variably collagenous background with benign features including minimal cellular pleomorphism and low mitotic activity (less than 4 mitoses per 10 high-powered fields) [2, 3, 4, 5]. Macroscopic necrosis was identified in one case in which the tumor was quite large (13 cm) [3]. Entrapped exocrine pancreatic tissue was present in two cases with one of those cases also containing endocrine tissue [2, 5].

In conclusion, we have reported the fifth case of pancreatic solitary fibrous tumor. This lesion is difficult to radiologically distinguish from other pancreatic neoplasms by crosssectional imaging. In our case, fine needle aspiration proved helpful to determine the benign mesenchymal nature of the tumor and was concordant with the pathologic findings at surgery. Histologic examination and immunohistochemistry were necessary to make the diagnosis of solitary fibrous tumor. While some malignant histologic features have been described in the literature, further reports and longer follow-up are needed to truly know the prognosis of this rare entity. Furthermore, the expanded use of endoscopic ultrasound with fine needle aspiration cytology may possibly spare patients the morbidity of pancreatic biopsy or resection.