Some Reflexions on the Modified Appleby Procedure

Context Resection of pancreatic cancer with vascular invasion is a controversial issue, especially when the arterial trunks, such as the celiac axis, are involved. The modified Appleby procedure deals with the problem of encasement of the celiac trunk. Case report Two patients with locally advanced pancreatic cancer are reviewed: a 65-year-old female and a 78-year-old male with pancreatic cancer and involvement of the celiac trunk and hepatic artery. The male patient received neoadjuvant chemoradiation. The former underwent an extended pancreatectomy with en-bloc resection of the hepatic artery, celiac trunk, gastric serosa and adrenal gland. Liberation of arterial trunk involvement in the second patient was performed. The margins were microscopically clear of tumor (R0) in both patients. The second patient died from cholecystitis owing to arterial insufficiency. Conclusions CT vascular encasement is not always synonymous with real tumoral vascular invasion. Improvement in the quality of anesthesiological and surgical techniques has allowed vascular resections with lower morbidity. A cholecystectomy should always be performed using the modified Appleby procedure.

Less than 20% of patients with adenocarcinoma of the neck/tail of the pancreas have resectable lesions [1]. Pancreatic cancer is considered unresectable when CT images show arterial encasement of the celiac trunk, superior mesenteric artery or portal vein thrombosis [2, 3]. However, vascular resection during a pancreatectomy is still under debate. The benefit of surgical resection for patients with isolated portal vein and/or superior mesenteric vein involvement is controversial, but evidence shows that resection has an advantage over palliative chemoradiotherapy for survival [4]. Resection for cancer with arterial involvement is not always accepted. Nonetheless, imaging techniques and surgery are not able to assess the real malignant invasion of vessels. Histology is the only way to assess true vessel wall invasion.

In the 1950s, Appleby proposed en-bloc resection of the celiac trunk with a distal pancreatectomy and total gastrectomy for the treatment of locally advanced gastric cancer [5]. Later in the 1990s, Japanese surgeons adopted the procedure with or without the preservation of the stomach for locally invasive central pancreatic cancers [6, 7].

A standardized therapeutic scheme for the treatment of patients with locally advanced pancreatic cancer is lacking in our institution. They usually receive palliative chemoradiation, but we are now considering to broad the indications for surgical resection. We herein present two cases of locally advanced pancreatic cancer with apparent invasion of the celiac trunk/hepatic artery at CT images.

Combined general/thoracic epidural anesthesia and postoperative epidural analgesia were employed in both patients. This combination allowed a decrease in the quantity of opiate and muscle relaxants, as well as a rapid extubation. Both patients received antithrombotic prophylaxis with bemiparine 3,500 IU/24 h (Laboratorios Farmacéuticos ROVI, SA m; Madrid, Spain). The surgical methods are described below.

A 65-year-old woman complained of persistent back pain 4 months after a hysterectomy for adenocarcinoma of the endometrium. The pain was moderate and not associated with jaundice or weight loss. Contrastenhanced abdominal CT revealed an ill-defined 7 cm mass with encasement of the celiac axis, the common hepatic artery and the left adrenal gland. The fatty plane of the posterior gastric wall was lost (Figure 1). The CA 19-9 was 568.7 U/mL (reference range: 0-37 U/mL) and CEA was 2.5 ng/mL (reference range: 0-3.8 ng/mL). She underwent an en-bloc resection. The posterior gastric wall was dissected away from the mass adherences with LigasureTM (Valleylab, Boulder, CO, USA) denuding the gastric serosa; compromising the lumen was deemed unnecessary to obtain a safe resection (Figure 1). The left Gerota’s fascia and adrenal gland, together with fibers of the left crus of the diaphragm were also resected. The common hepatic artery was evered first due to encasement (macroscopic appearance) in the superior border of the tumor (Figure 2). The celiac trunk was severed to the right of the retropancreatic porta after a pancreatic section which permitted en-bloc resection of the specimen. Histopathologic examination of the surgical specimen revealed non-differentiated adenocarcinoma of the pancreas (R0 resection). Encasement of the hepatic artery, celiac trunk, adrenal gland, gastric wall and muscle fibers from the diaphragmatic crus were secondary to desmoplastic reaction without malignant cells. The patient was free from back pain immediately after the operation but a pancreatic fistula was detected. The fistula was resolved, but an abdominal abscess appeared requiring percutaneous drainage. A 78-year-old man had had a subtotal gastrectomy four years earlier for a gastric adenocarcinoma (intestinal type). On follow-up, an 8 cm mass was detected in the pancreatic neck and a biopsy diagnosed an adenocarcinoma of the pancreas. The tumor was deemed unresectable because of the encasement of the celiac trunk and hepatic artery. Adjuvant chemoradiotherapy was applied with gemcitabine and a local response (downsizing) was obtained (Figure 3). Surgical resection was then re-considered and a laparotomy was indicated. The desmoplastic reaction was very intense because of the radiotherapy, with involvement of the transverse colon and Glisson of the inferior hepatic border (Figure 4), gallbladder, hepatoduodenal ligament and, finally, the pancreatic mass. The dissection of the desmoplastic reaction was highly cumbersome, even more difficult than the dissection of the mass. The hepatic artery was freed from the fibrotic tissue (Figure 5) as was the celiac trunk. No malignant cells were identified in the microscopic intraoperative study of that fibrotic tissue. An en-bloc pancreatosplenectomy, together with removal of the tumoral mass, was performed. Sectioning of the pancreas was carried out above the Wirsung and biliary ducts and a rim of the pancreatic head was left in place. Histopathology revealed necrosis in the entire specimen without malignant cells. The outcome was however fatal; the patient developed non-lithiasic cholecystitis and died at the end of the third postoperative week. A thrombosis of the common hepatic artery was found on postoperative CT, and the cholecystitis etiology was attributed to arterial insufficiency aggravated by radiation injury. 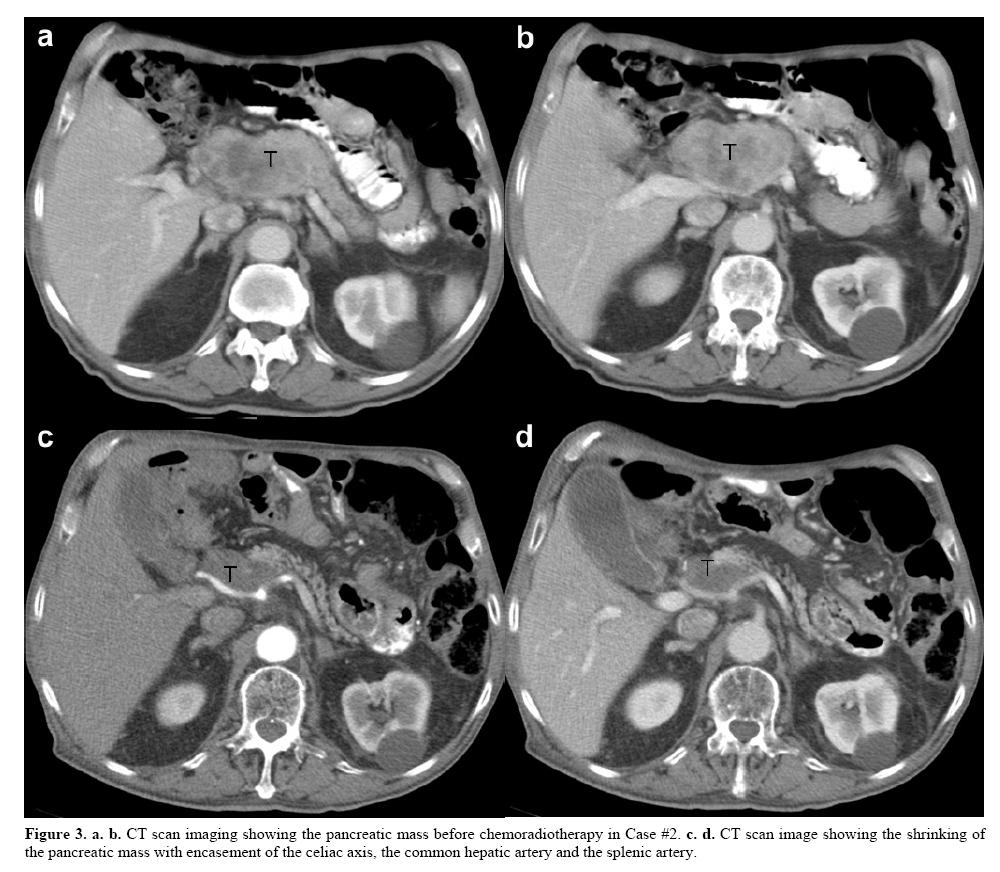 No survival advantages and elevated morbidity are the arguments for refusing surgical resection in pancreatic cancer with vascular involvement. Nevertheless, the data do not support those arguments [8, 9]. Resection of the involved vein (portal or superior mesenteric vein) in pancreatic cancer is now generally accepted. On the contrary, when it comes to involvement of the arterial trunks, the thinking is different which sounds illogical. Patients, with or without vascular resection, have comparable survival rates, and even vessel wall invasion has not been demonstrated to affect survival [10]. Maybe it is shocking that vascular wall invasion is not a risk factor for the patient’s outcome, but this is because of the presence of other explicative factors, such as tumor stage and neoadjuvant treatment [10]. Nonetheless, the problem of defining unresectability for pancreatic tumors using a CT-based preoperative staging system is that one cannot be sure of the real vascular involvement until the resection is undertaken. In 100 patients with adenocarcinomas and suspected vascular invasion, Yekebas et al. [11] confirmed vascular invasion by histopathology in 77 patients; the remaining patients had peritumoral inflammation mimicking tumor invasion. In the study of Adham et al. [10], only one of six resected arteries was really involved. Of our two patients, neither had real malignant arterial invasion.

The technique of major vascular resection was first reported in the early 1950s [12, 13], but it was not popularized until the 1970s by Fortner [14, 15]. Pancreatic vascular resection had been associated with high morbidity and mortality. Nowadays anesthesiological and surgical skills have undergone considerable evolution and refinement with an acceptable rate morbidity and mortality. As we showed in our first case report, even in the presence of organ involvement, such as the stomach, it is not always necessary to perform extended resections including the involved organ (i.e. gastrectomy) and a resection with safe margins is enough to obtain oncologic results (i.e. R0 resection).

Celiac trunk resection without arterial reconstruction (i.e. the Appleby procedure) is based on the presence of collateral circulation between the superior mesenteric artery and the hepatic artery by way of an intact pancreaticoduodenal arcade. Some groups have used preoperative coil embolization of the common hepatic artery to decrease ischemia-related complications, such as gallbladder or hepatic necrosis [9, 16, 17]. The interval between embolization and surgery is 1-2 days because, immediately after embolization, collateral pathways develop from the superior mesenteric artery via the pancreatoduodenal arcades to the gastroduodenal and main hepatic arteries [16].

A cholecystectomy is performed systematically by some authors [8]; meanwhile, other groups perform elective cholecystectomy [9]. In our short experience, we have now included it as a condition sine qua non because of the potentially lethal cholecystitis which may develop if an arterial insufficiency becomes patent. Nevertheless, the influence of previous radiotherapy on our patient who had a fatal outcome should be considered. The intraoperative macroscopic view of the arterial trunks was peculiar in this patient, with dullness of the hepatic artery and celiac trunk and a weak pulse at palpation. Since maintenance of the primary hepatic flow was carried out and no final resection of the artery was done we did not consider doing any kind of arterial reconstruction. Signs of hepatic failure did not appear in the postoperative period so it is highly probable that a cholecystectomy would have been enough to avoid the dismal outcome. Revascularization strategies have recently been described to assure the preservation of the hepatic arterial flow and to avoid hepatobiliary complications, such as liver necrosis, liver abscesses, gallbladder necrosis or cholecystitis. Machado et al. have reported their experience on revascularization with the iliachepatic artery bypass using a Dacron prosthesis [18]. This would be useful when compromised hepatic flow is detected in the operative procedure, but gallbladder complications would be avoided in the Appleby procedure simply by performing a cholecystectomy in all cases.

In conclusion, resection of a locally advanced pancreatic mass is the only way of determining real vascular invasion. Refinements of anesthesiological and surgical skills allow lesser morbidity in this type of surgery. A cholecystectomy is imperative in order to avoid the potential danger of hepatic ischemia when severing the celiac trunk is planned. Long-term survival after resection in patients with locally advanced tumors is superior to that of patients undergoing palliative therapy [11].