Biliary cast syndrome is an unusual complication of orthotopic liver transplantation with serious clinical implications [1, 2]. It is defined by the presence of casts morphologically confined to bile duct dimensions and causing obstruction and its attendant complications [1, 2]. It has also been described rarely in non liver transplant settings [3, 4, 5, 6]. Biliary cast formation is usually associated with biliary strictures and/or hepatic ischemia. Other attributed causes include fasting and total parenteral nutrition related gallbladder hypomotility and recent surgery [3, 4, 5, 6].

Surgical management has been the mainstay of treatment. Endoscopic techniques are recently described in the successful removal of biliary casts [2, 7, 8, 9]. A variety of techniques including biliary sphincterotomy, balloon/basket extraction, electrohydraulic and mechanical lithotripsy have been used through ERCP to extract biliary casts. However, the success rate varies from 25-60% with either endoscopic and/or percutaneous techniques [2, 7, 8, 9]. Many patients who fail endoscopic and surgical treatment will require retransplantation. 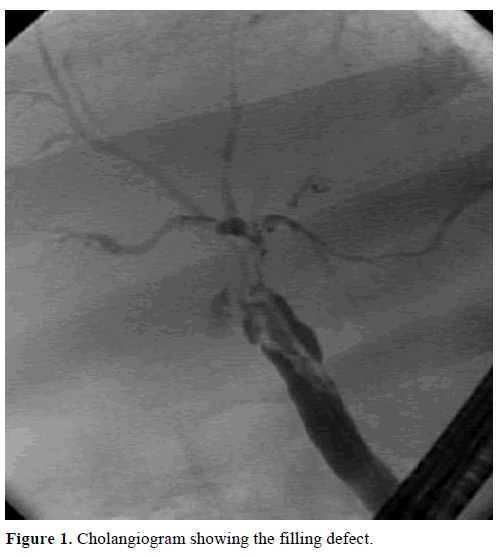 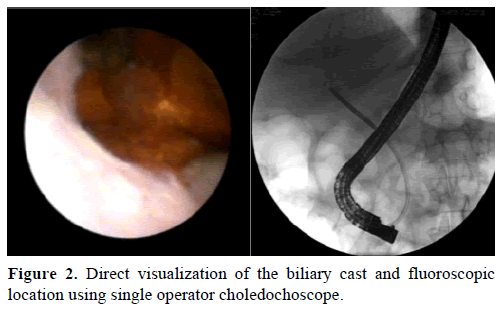 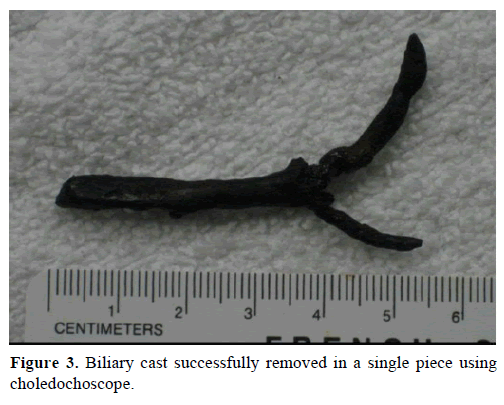 Biliary cast syndrome is defined by the presence of casts within the intra- or extra-hepatic biliary system due to lithogenic material confined to bile duct dimensions [1, 2]. It is an obstructive cholangiopathy, described almost three decades before in orthotopic liver transplantation recipients [1]. However, biliary cast syndrome occurring outside of the setting of liver transplant is reported in post cholecystectomy, post head trauma, antiphospholipid antibody syndrome and fasting-related gallbladder hypocontractility, parenteral nutrition, biliary infection all contributing to the formation of biliary casts [3, 4, 5, 6].

Biliary cast syndrome is a rare complication of orthotopic liver transplantation, incidence varying from 3% to 18% and should be thought of in patients presenting with cholestatic liver enzyme elevation, ductal dilatation on imaging studies, jaundice and/or cholangitis usually within the first year of transplant [2, 7]. In fact, more than 70% of casts are identified in the first 16 weeks post transplant and associated with graft failure, retransplantation and mortality [11, 12]. However, casts can occur up to 5 years after orthotopic liver transplantation [13]. In fact in the study by Shah et al., biliary cast syndrome was reported as late as 6.5 years after the transplant [2].

The pathogenesis of biliary cast syndrome is unclear, but increased bile viscosity and bile flow obstruction has been proposed. Biliary cast syndrome was independently associated with biliary strictures and/or hepatic ischemia (non-heart beating donor grafts) as demonstrated in a large study [2].

Diagnosis is established mainly by ERCP or percutaneous transhepatic cholangiography [14]. Surgery or re-transplant were the main stay of treatment of biliary cast syndrome in the past [1, 13]. Surgical success rates are reported greater than 85% [7]. However, it is associated with substantial morbidity. Endoscopic and percutaneous interventions with serial dilatations of the percutaneous port and choledochoscopy have reported success rates up to 70% [7, 8, 9, 15]. Although the complications associated with the percutaneous procedures are far less compared to major surgery involving removal of casts or re-transplant, they are prone to all complications including biliary sepsis. Recently, percutaneous approach with serial dilatations of the percutaneous port and choledochoscopy-assisted removal of the biliary casts in a patient with hepaticojejunostomy was reported by Srinivasaiah et al. [16]. They reported that they were able to treat successfully using the percutaneous route as the Rouxen- Y makes the therapeutic intervention through ERCP really difficult.

Given that both percutaneous and surgical intervention is associated with morbidity, we attempted endoscopic intervention. Single operator cholangioscopy is useful for direct visualization of bile ducts, tissue sampling and therapeutically for intrahepatic stone clearance [10]. We therefore attempted cholangioscopy in diagnosing the cause of the filling defect and were able to visualize the biliary casts directly. We were also able to extract the cast in a single sitting without any complications. In a large study of post orthotopic liver transplantation complications, biliary cast syndrome occurred in 4/260 patients, a median of 3.5 ERCP treatments attempted over a median of 21 weeks achieved a success rate of 25% [8]. We believe that our success was due to direct visualization and our ability to complete grasp the cast using the basket.

Recently a case reported the successful use of ursodeoxycholic acid in the treatment of persistent elevated liver enzymes following endoscopic removal of extrahepatic biliary casts [6]. Cholangioscopy is advantageous that it can directly visualize the intrahepatic ducts and can attempt complete removal in comparison to ERCP. The liver functions returned back to normal and our patient did not have residual cholestasis. In a retrospective study from our institute comparing single operator cholangioscopy and ERCP in the diagnosis and treatment of biliary disorders, we found that cholangioscopy altered patient management as compared to the initial ERCP in 42.1% of the patients [10].

Importantly, single operator cholangioscopy avoided the need for percutaneous or surgical intervention in our patient and provided the opportunity to do just one time intervention.

Presented as a poster presentation in the American College of Gastroenterology 2008 Meeting. Orlando, FL, USA. October 3-8, 2008.

No financial support was provided for this article

No conflicts of interest to declare