Context Treatment of pancreatic cancer remains a major oncological challenge and survival is dismal. Most patients, present with advanced disease at diagnosis and are not candidates for curative resection. Preoperative chemoradiation may downstage and improve survival in locally advanced pancreatic cancer. This has prompted investigators to look for novel neoadjuvant therapies. Gene therapy for pancreatic cancer is a novel investigational approach that may have promise. TNFeradeTM is a replication deficient adenovirus vector carrying the human tumor necrosis factor (TNF)-alpha gene regulated under control of a radiation-inducible gene promoter. Transfection of tumor cells with TNFeradeTM maximizes the antitumor effect of TNF-alpha under influence of radiation leading to synergistic effects in preclinical studies. Case report We describe a case of locally advanced unresectable pancreatic cancer treated with a novel multimodal approach utilizing gene therapy with TNFeradeTM and concurrent chemoradiation that was followed by successful surgical resection. Conclusion Neoadjuvant TNFeradeTM based chemoradiation therapy may be a useful adjunct to treatment of locally advanced pancreatic cancer.

Treatment of pancreatic cancer remains a major oncological challenge and survival is dismal. Due to the poor outcome despite all currently available therapies, there is increasing interest in novel approaches such as gene therapy for locally advanced pancreatic cancer. TNFeradeTM (GenVec, Inc., Gaithersburg, MD, USA) is a replication defective adenovirus vector carrying the human tumor necrosis factor (TNF)-alpha gene regulated under control of a radiation-inducible gene promoter. Transfection of tumor cells with TNFeradeTM maximizes the antitumor effect of TNF-alpha under influence of radiation leading to synergistic effects in preclinical studies. We describe a case of locally advanced unresectable pancreatic cancer treated with a novel multimodal approach utilizing gene therapy with TNFeradeTM and concurrent chemo-radiation that was followed by successful surgical resection.

A 56-year-old white female presented to her primary physician with 4-month history of epigastric pain, nocturnal reflux and 6.4 kg weight loss. She was a 37 pack/year smoker with a family history of pancreatic cancer in father. Endoscopic retrograde cholangiopancreatography (ERCP) revealed a large segment stricture of distal common bile duct with pancreatic duct dilatation suspicious for a pancreatic cancer. Biliary stenting was performed. Computed tomography (CT) abdomen and pelvis demonstrated a pancreatic head mass measuring 4.5x3.2 cm that extended to gastric wall and extended to the right border of the superior mesenteric artery. Regional adenopathy was noted (Figure 1a). Small hypodense hepatic lesions were noted and felt to represent potential early metastases. Given the locally advanced pancreatic cancer with questionable liver metastasis, the patient was deemed initially inoperable. Ultrasound guided biopsy of pancreatic mass confirmed the diagnosis of a well-differentiated adenocarcinoma of pancreas. She was considered surgically unresectable and referred for a phase II trial of definitive chemoradiation along with TNFeradeTM. Figure 1. CT scans of abdomen at the level of pancreatic lesion. a. A pancreatic head mass measuring 4.5x3.2 cm with inflammatory changes or neoplastic extension adjacent to the posterior head and along the right border of the superior mesenteric artery is noted (arrow). b. Post neoadjuvant chemoradiation therapy with intratumoral TNFeradeTM administration. Decreased perfusion is noted. The tumor has reduced size (3.1x3.3 cm) and importantly the prior change along the superior mesenteric artery border is improved (arrow).

After obtaining informed consent, treatment was started with weekly intrapancreatic TNFeradeTM injections delivering 4x1011 Pu of the vector, percutaneously under ultrasound guided biopsy guidance for 5 weeks. Concomitant 5-fluorouracil was administered as a continuous infusion at 200 mg/m2/day, Monday through Friday, weekly. External beam radiation was delivered along with chemotherapy at a total dose of 5,040 cGy over 5.5 weeks. Patient tolerated the therapy well without dose limiting toxicities. She maintained an Eastern Cooperative Oncology Group (ECOG) performance status of 0-1 throughout therapy. Upon completion of therapy, CA 19-9 level improved to 30.9 U/mL and liver function tests were normal. Serial TNF-alpha level during therapy were in the reference range. 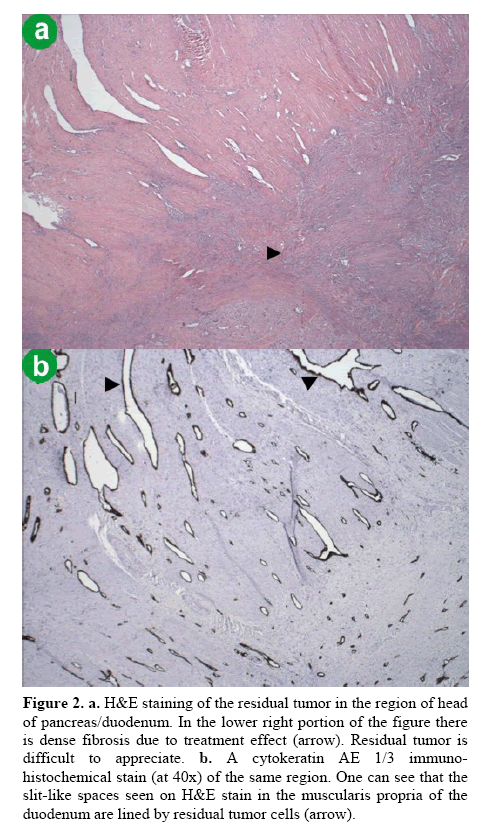 Figure 2. a. H&E staining of the residual tumor in the region of head of pancreas/duodenum. In the lower right portion of the figure there is dense fibrosis due to treatment effect (arrow). Residual tumor is difficult to appreciate. b. A cytokeratin AE 1/3 immunohistochemical stain (at 40x) of the same region. One can see that the slit-like spaces seen on H&E stain in the muscularis propria of the duodenum are lined by residual tumor cells (arrow).

Pancreatic cancer is the second most common gastrointestinal malignancy and fourth most common cause of adult deaths from cancer in U.S. [1]. Fewer than 15% of newly diagnosed pancreatic cancer patients are eligible for curative resection [2]. Available data suggests that the combination of surgery with postoperative adjuvant chemoradiation improves survival and loco-regional tumor control compared with surgery alone [2]. However, the morbidity and prolonged recovery time associated with pancreaticoduodenectomy hinders timely delivery of postoperative chemoradiation in up to one-fourth of eligible patients. [3] Preoperative chemoradiation may improve negative resection margin rates and decrease incidence of pancreaticojejunal anastomotic fistulae as well as spare unnecessary surgery in patients who have progression despite the therapy [3].

In lieu of the poor outcome despite all currently available therapies, there is increasing interest in novel approaches such as gene therapy for locally advanced pancreatic cancer. The potent antitumor activity of TNF-alpha is well demonstrated in literature; however, severe systemic toxicity has precluded its widespread clinical use [4]. Gene therapy with TNFeradeTM aims to maximize the local antitumor effect of TNF-alpha while minimizing systemic toxicity. TNFeradeTM is an E1-, partial E3- and E4 deleted replication defective adenovirus 5 vector carrying a radiation-inducible immediate response Egr-1 (early growth response) gene promoter ligated upstream to the transcriptional start site of human TNF-alpha cDNA (Figure 3). This construct allows maximal TNF-alpha gene expression under the regulatory control of locally targeted radiation therapy [5]. Hence, there is a spatial and temporal control of the radio sensitivity and cytotoxicity [6]. Radiation alone has variable effects on the shrinkage of pancreatic cancer. While infusional 5- FU traditionally may cause tumor shrinkage with radiation, the impressive response to therapy in our patient is likely due to TNFeradeTM. There was a significant decrease in the inflammatory response around the tumor which was in close proximity to the superior mesenteric artery and significant tumor fibrosis on pathologic examination which is a described effect of TNFeradeTM therapy. Available data support synergy between TNF-alpha and ionizing radiation. Locally secreted TNF-alpha increases the level of hydroxyl or other radical products, thereby enhancing the oxidative damage produced by radiation [5]. Other proposed mechanisms include sphingomyelin-ceramide signal transduction pathway mediated endothelial apoptosis as well as enhanced production of angiostatin leading to antiangiogenic effects [5]. Animal studies and phase I trial in humans have revealed decrease in mean tumor volume after treatment with TNFeradeTM and radiation [5]. Furthermore, a phase I trial showed that repeated TNFeradeTM injections of doses up to 4x1011 Pu were well tolerated without significant local or systemic toxicities [5]. We did not observe any dose limiting toxicities in our case. She experienced mild to moderate side effects including mild nausea, diarrhea and abdominal pain. The peri-operative hypotension episode in our patient was unlikely to be due to TNFeradeTM injection. The short half-life of TNF-alpha (20 to 30 min) [5] would exclude its persistence in circulation 4 months after the last TNFeradeTM dose. Of note, TNF-alpha was not detected on immunohistochemical testing in pathology specimen from pancreas. This is likely due to the fact that surgery was undertaken 4 months after the completion of therapy and short half-life of TNF-alpha would exclude its presence in the tumor. We believe that TNFeradeTM may have contributed to the necrosis and apoptotic changes seen in the pathologic specimen.

McLoughlin et al., in a phase I trial of TNFeradeTM with ionizing radiation, demonstrated the feasibility and safety of this combination in various solid tumors [7]. We believe that our experience with this case suggests that intra-pancreatic injection of TNFeradeTM may be safe when combined with chemoradiation to optimize the therapy for locally advanced pancreatic cancer. An ongoing randomized trial in locally advanced pancreas cancer is underway designed to answer the added value of TNFeradeTM to 5-FU based radiation therapy. Recent data by Murugesan et al. show that addition of TNFeradeTM to gemcitabine resulted in significant shrinkage of pancreatic xenografts relative to either agent alone [8]. This may open newer avenues for therapy in patients with pancreatic adenocarcinoma, especially in borderlineresectable cases.

The authors wish to thank GenVec, Inc. (Gaithersburg, MD, USA) for their support