Wernicke Encephalopathy Presenting in a Patient with Severe Acute Pancreatitis

Context Acute pancreatitis can lead to prolonged fasting and malnutrition. Many metabolic changes, including thiamine deficiency, may lead to the well know pancreatic encephalopathy. In this condition however the thiamine deficiency is rarely suspected. Case report We report the case of a 17-year-old woman with severe acute pancreatitis who developed mental status changes and ophthalmoplegia. A magnetic resonance image showed hyperintensive signals in periventricular areas, medial thalamus, and mammillary bodies, findings consistent with the diagnosis of Wernicke encephalopathy. Thiamine treatment reversed neurological complications. Conclusion Wernicke encephalopathy secondary to thiamine deficiency should be considered as a possible cause of acute mental status changes in patients with acute pancreatitis and malnutrition. Prophylactic doses of thiamine could be considered in susceptible patients.

A 17-year-old woman with no prior history reported to the emergency department, complaining of 8 days of severe abdominal pain radiating to the back accompanied with nausea and vomiting. Her cardiovascular and neurological exams were normal. Her vital signs were: heart rate of 125 min-1, blood pressure 120/80 mmHg, temperature 38.1°C, and respiratory rate 30 min-1. Her blood workup showed mild anemia, leukocytosis and hypoalbuminemia. Serum amylase was 154 IU/L (reference range: 25-125 IU/L) and lipase 554 IU/L (reference range: 23-300 IU/L). The diagnosis of acute necrotizing pancreatitis was confirmed after an abdominal CT scan showed biliary sludge in the gallbladder and a large fluid collection around a severely inflamed pancreas. APACHE-II scores for the patient reached 15 points. The patient was admitted to the internal medicine ward and medical treatment was initiated, including fasting and initiation of parenteral nutrition. After a CT-guided aspiration of the peripancreatic fluid collection that was positive for an antibiotic-sensitive E. coli, antibiotic treatment was started with imipenem.

After 15 days of a favorable clinical course, and after the acute episode was resolved, the patient was referred to the surgery department for a laparoscopic pancreatic necrosectomy and cholecystectomy. These procedures were uneventful, and the patient was admitted to the surgical ward for recovery. At this point, the neurological exam was normal, and the patient was afebrile and hemodynamically stable. The patient was again referred to the internal medicine department at the 8th post-operative day because of mental status changes, including drowsiness, confusion and dizziness. At interrogation, the patient complained of severe headache and diplopia. At neurological examination, she had a horizontal nystagmus, VI cranial nerve palsy, signs of cerebellar dysfunction, short term memory impairment, and lethargy. Deep tendon reflexes were increased in lower limbs. General muscle weakness (4/5) was also found. Her blood glucose was normal; she had low hemoglobin (10.6 g/dL; reference range: 12.2-18.1 g/dL), no signs of meningeal irritation and a normal spinal fluid analysis. Antinuclear antibodies were negative and thyroid function tests normal. Because of the prolonged fasting, Wernicke encephalopathy was suspected. A contrasted brain MRI was performed that showed hyperintensive signals in periventricular areas, medial thalamus, and mammillary bodies, findings consistent with the diagnosis of Wernicke encephalopathy (Figure 1). An electroencephalography was performed. Even though the patient’s initial thiamine levels were not determined, the authors made the diagnosis of Wernicke encephalopathy, and 300 mg of thiamine daily was started in i.v. fluids as well as other electrolytes. After 7 days, her symptoms began to slowly improve, with correction of dizziness, alterations in consciousness and improvement in memory disturbances. Nystagmus and ophthalmoplegia improved but were not reversed completely. 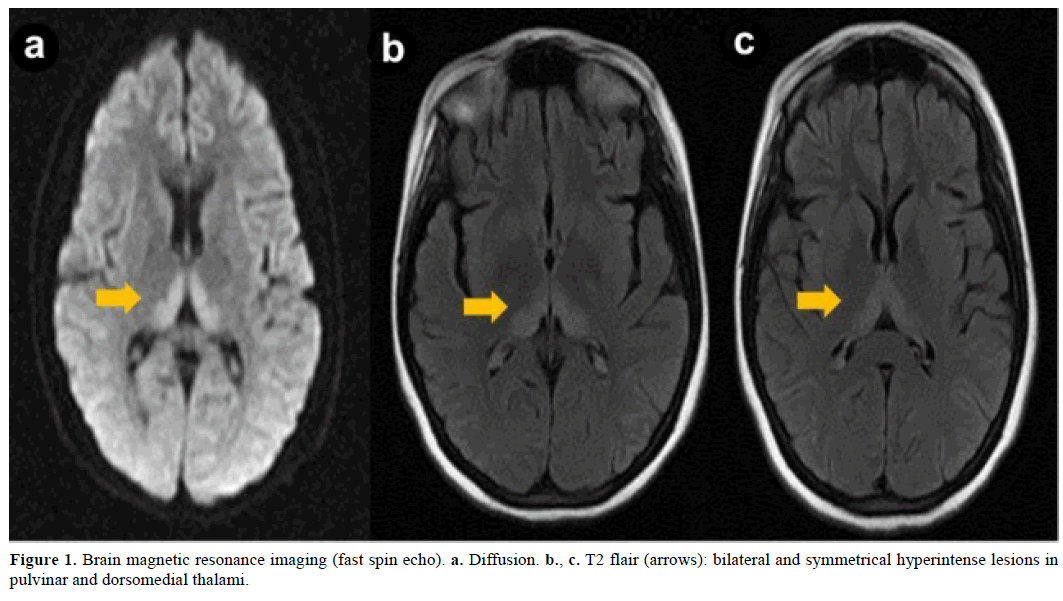 Wernicke encephalopathy is a neuropsychiatric condition associated with thiamine deficiency, classically presenting as a combination of acute onset ataxia, ophthalmoplegia, nystagmus and confusion [1]. It can lead to a closely related condition, the more chronic Korsakoff dementia syndrome [1]. MRI is the preferred imaging method employed for the diagnosis of Wernicke encephalopathy, with a sensitivity of 53% and a specificity of 93%, and findings commonly include affectation of mammillary bodies, thalamus, periventricular areas, and hippocampus [3, 4]. However, it is known that only 16% of patients present with the classic triad of eye signs, confusion and ataxia [5]. This has led to a reevaluation of the clinical diagnosis of Wernicke encephalopathy, concentrating now on the predisposing conditions when encountering a patient with neuropsychiatric symptoms.

Thiamine, or vitamin B1, is an essential nutrient not produced by the body, which makes its dietary intake its only natural source. The average daily requirement is 0.66 mg, but currently a daily intake of 1.1 mg is recommended for adult women and 1.2 mg for adult men [6]. Thiamine is a co-factor in the tricarboxylic acid cycle, and neurons, because of their dependence on oxidative metabolism, are very sensitive to thiamine deficiency, which leads to cell death via apoptosis, impaired transmitter signaling and DNA damage [7].

Thiamine deficiency associated with Wernicke encephalopathy occurs mainly in alcoholics, and 90% of patients presenting with Wernicke encephalopathy have a history of important alcohol use [8]. The mechanisms by which alcohol induces thiamine deficiency are varied: decreased absorption in the gastrointestinal tract, inadequate nutritional intake, and impaired intracellular utilization [6]. However, many other conditions are known to predispose to thiamine deficiency, including important weight loss, repeated vomiting, prolonged fasting, and other nutritional abnormalities [5]. Our patient had no history of alcohol use, but her gastrointestinal condition (acute pancreatitis) led to vomiting and fasting. During her hospitalization, complications led to the utilization of prolonged total parenteral nutrition, without adequate thiamine supplementation. Additionally, it was revealed that she had recently given birth, and medical records showed she had lost excessive weight in the postpartum.

A condition known as pancreatic encephalopathy has been described. It is a complication of severe pancreatitis, presenting as confusion, restlessness, altered consciousness, and associated with diffuse demyelination and white matter changes in cerebral imaging [9]. Pancreatic encephalopathy presents in 18% of patients with severe acute pancreatitis, and is associated with mortality close to 70% [10]. The physiopathology is not completely understood: altered hemodynamic, metabolic status, electrolyte and fluid disorders, inflammatory cytokines, and a direct neurotoxic action of phospholipase have all been implicated [9]. Treatment consists of that of the underlying condition. Our patient had severe pancreatitis, with an APACHE-II score of 15 and a large peripancreatic collection that became secondarily infected. Considering the overlap of neuropsychiatric manifestations associated with both pancreatic encephalopathy and Wernicke encephalopathy, as well as the multiple concomitant clinical and metabolic alterations capable of explaining the neurologic alterations, the distinction of these two entities can be quite difficult. This can lead to delay in treatment and increased morbidity/mortality. We have no direct evidence of thiamine deficiency in our patient, but the eye signs and affectation of mammillary bodies strongly suggests the diagnosis of Wernicke encephalopathy in our patient. Furthermore, an intriguing possibility is that thiamine deficiency might play a co-causative role in undiagnosed cases of pancreatic encephalopathy.