What Options Are Available for Refractory Pancreatic Cancer?

Currently gemcitabine-based regimens and FOLFIRINOX (5-fluorouracil, leucovorin, irinotecan, and oxaliplatin) are widely used standard for first-line treatment of patients with advanced pancreatic adenocarcinoma. Refractory patients may receive either FOLFOX (5-fluorouracil and oxaliplatin) or gemcitabine based on the first line regimen. This review is an update from the 2012 American Society of Clinical Oncology (ASCO) Gastrointestinal Cancers Symposium regarding recent developments in the treatment of refractory pancreatic cancer, as these were presented in Abstracts #248 and #373 of the meeting.

Pancreatic cancer is considered among the most aggressive and the least curable of all human malignancies. Single-agent gemcitabine has evolved as a standard of care for treatment of advanced pancreatic cancer based on a randomized study that compared gemcitabine with 5-fluorouracil (5-FU) as first-line chemotherapy for advanced pancreatic cancer; the response rate was 5.4% in patients treated with gem citabine versus none of the 5-FU treated patients [1]. Gemcitabine was associated with a statistically significant improvement in pain control, weight loss and functional impairment. However, the median survival for gemcitabine arm was still a dismal 5.65 months with 1-year survival rate of 18% [1]. Since that report, many trials have failed to prove any further benefit from adding additional chemotherapeutic agents to gemcitabine. In the 2010 American Society of Clinical Oncol ogy Annual Meeting, a randomized phase III trial comparing the FOLFIRINOX (oxaliplatin and irinotecan plus fluorouracil and leucovorin) regimen to gemcitabine in advanced pancreatic cancer was presented [2]. Final results showed an overall survival increased from 6·8 months to 11·1 months (P<0.0001) [3]. More interestingly, almost half the patients in the FOLFIRINOX group were alive after 1 year and response rate was 31.6%, i.e., the highest rate seen in phase III pancreatic cancer trials.

What Did We Know Prior to the 2012 ASCO Gastrointestinal Cancers Symposium?

There are evidences that support chemotherapy can benefit patients who failed first line chemotherapy. In pancreatic cancer patients who have failed first line gemcitabine, patients were randomly assigned either oxaliplatin, leucovorin and 5-FU (OFF) regimen versus either best supportive care or 5-FU. In both studies, oxaliplatin based regimen OFF showed improved overall survival and clinical benefit as summarized in Table 1 [4, 5]. The patients who received OFF chemotherapy had higher incidence of neuropathy and gastrointestinal complications. In another phase II study capecitabine and oxaliplatin (XELOX) was given to patients who have failed one prior chemotherapy. Forty-one patients were treated and overall median survival was 23 weeks and median progression free survival was 9.9 weeks [6]. Similar oxaliplatin based toxicity was noted, like fatigue and neuropathy. Based on the above studies, it has been suggested that oxaliplatin based regimes are reasonable second-line regimens after failing gemcitabine based chemo- therapy. However, there are no data on second-line chemotherapy in patients failing first-line FOLFIRINOX regimen.

What Did We Learn at the 2012 ASCO Gastrointestinal Cancers Symposium?

Two retrospective studies were presented in the 2012 ASCO GI Cancers Symposium for patients who failed either gemcitabine or S1 chemotherapy.

This study showed a single center experience in using gemcitabine and nab-paclitaxel in 10 patients with refractory pancreatic cancer. Nine patients had at least 2 prior chemotherapy regimens and received gemcitabine 1,000 mg/m2 and nab-paclitaxel 100 mg/m2 on days 1, 8 and 15 of a 28-day cycle. Disease control rate was 55% with two (22%) patients had confirmed response. The median PFS was 20 weeks for responders and 9.9 weeks in non-responding patients. Grade 3-4 hematologic toxicity was noted in majority of patients including 70% of patients requiring growth factor support. Grade 3-4 non hematologic toxicity included fatigue, peripheral neuropathy; nausea and vomiting was noted in 60% of patients [10].

This study retrospectively examined the data of 27 patients who have failed first-line S-1 therapy and receiving gemcitabine therapy in Japan. There were 16 male and 11 female patients with a median age of 62 years. In this small group of Japanese population, disease control rate was 56% (15 patients) with four patients (15%) exhibited a partial response to secondline gemcitabine. No new toxicity was noted in the second line setting. The median progression free survival was 77 days and the median overall survival after second-line gemcitabine was 240 days [11].

A summary of the data presented in the two abstracts (#248 and #373) from the 2012 ASCO Gastrointestinal Cancers Symposium is shown in Table 2. 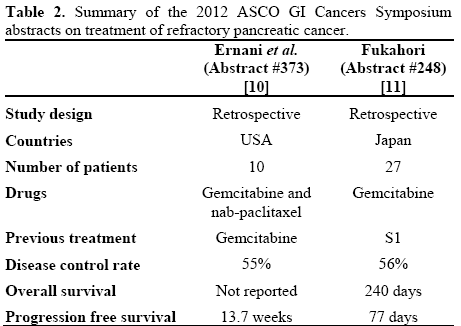 Overexpression of secreted protein acidic and rich in cysteine (SPARC) has been noted in the pancreatic cancer and its stroma. Nab-paclitaxel (abraxane) has shown clinical activity in patients who overexpress SPARC due to its binding with albumin portion of the paclitaxel. In vitro study done by Awasthi et al. at the 2012 ASCO GI Cancers Symposium further tested the experimental pancreatic cancer models with in vitro proliferation assays in AsPC-1, BxPC-3, MIA PaCa-2 and Panc-1 cell lines. It showed inhibitory concentration 50% (IC50) in the nanomolar concentration and further studies have shown that nab- paclitaxel has significant additive effect with gemcitabine [12]. These pre-clinical data support testing of nab-paclitaxel in patients with pancreatic cancer. The 10-patient study done by Ernani et al. raises an important question [10]. Is combination nabpaclitaxel able to reverse the resistance to gemcitabine based chemotherapy? It is hard to answer this question with a ten patients retrospective study, but larger studies are warranted to answer this important question. However, the toxicity associated with doublet gemcitabine and abraxane may limit further evaluation as compared to single agent abraxane in second line setting.

S1 is an oral fluoropyrimidine combining tegafur: a prodrug of 5-FU, 5 chloro-2,4-dihydroxypyridine (CDHP) with a reversible inhibitor of dihydropyrimidine dehydrogenase (DPD) and potassium oxonate, an antidiarrheal agent protective against 5-FU gastrointestinal toxicity in a molar ratio of 1:0.4:1. It is widely used in Japan and Korea for gastric cancer and clinical activity has been noted in other solid tumors. Nakamori et al. investigated 29 patients with gemcitabine refractory pancreatic cancer using S1 and gemcitabine chemotherapy. One patient (3.4%) achieved complete response and 5 patients (17.2%) achieved partial response. Median overall and progression free survivals were 12.3 and 3.5 months, respectively [13]. Fukahori from Tokyo National Cancer Center reports similar data this year with 27 patients but using S1 alone in gemcitabine failed patients [11]. The median overall survival was 8 months with 14% partial response was noted. These data are interesting but has limited value in United States and Europe since S1 is not available in Western hemisphere. However, the hypothesis that gemcitabine might have clinical activity after 5-FU based regimen failures may have clinical implication in patients who have failed FOLFIRINOX chemotherapy. Since there are no standards currently established for patients who fails front line FOLFIRINOX; perhaps this is an indirect evidence that gemcitabine might be useful.

Very little progress was made in refractory pancreatic cancer in the 2012 ASCO GI Cancers Symposium. Larger randomized studies are need in this setting to answer critical questions of activity in refractory setting. However, many pancreatic cancer patients who progress on first line chemotherapy have aggressive cancer with poor performance status and therefore limit the clinical trial participation. Perhaps a novel strategy of testing active agents before disease progression might be considered in this setting. Especially in patients who have stable disease with FOLFIRINOX chemotherapy and considering either treatment break due to toxicity or patients who cannot take prolonged treatment due to cumulative neuropathy associated with oxaliplatin. Testing novel agents in patients who have stable disease can potentially improve quality of life as well as increase the population of patients who might be able to enroll in clinical trials in the near future.