Gallstone pancreatitis accounts for 35-40% of acute pancreatitis cases worldwide. It constitutes the majority of acute pancreatitis cases in Turkey [1-4]. Pathophysiologically, the ampulla of Vater becomes obstructed by migrating stones. The initial treatment in these patients may be conservative or interventional. More specifically, conventional [5-7] or laparoscopic surgery [8- 10] is recommended due to the high recurrence rates (29- 63%) in patients without any intervention. However, there is no consensus yet on the timing of a cholecystectomy in patients with biliary pancreatitis. The aim of this study was to compare early laparoscopic cholecystectomies (LCs) to late LCs performed during the first attack in the treatment of acute pancreatitis, and to evaluate their effects on mortality and morbidity.

The files of patients hospitalized with the diagnosis of acute biliary pancreatitis (ABP) in the General Surgery Clinic of Fatih Sultan Mehmet Training and Research Hospital were retrospectively analysed. The patients were assigned to one of two groups according to their treatment methods. Group 1 included patients who underwent an early LC during the first pancreatitis attack after showing clinical improvement. Group 2 included patients who received medical treatment during the first attack and planned an elective LC (interval cholecystectomy) for at least eight weeks later. The patients were evaluated in terms of age, sex, clinical findings, number of attacks, length of hospital stay, morbidity and mortality. An ABP diagnosis was considered when the following criteria were met: (1) an acute abdominal pain and tenderness; (2) serum amylase and/or lipase values three times higher than normal; (3) the detection of stones in the biliary system with ultrasonography; and (4) the exclusion of alcohol, familial hyperlipidaemia and other causes of pancreatitis aetiology. Acute cholecystitis was considered when gallbladder wall thickness or pericholecystic fluid observed in the preoperative imaging examinations. Disease severity was assessed by Ranson scoring. Mild and moderate patients were classified as ≤ 3 [11, 12]. Clinical improvements were determined as having a normalization of serum amylase and lipase and liver function tests (if these were high at baseline) and a regression of abdominal pain. The Statistical Package for Social Sciences (SPSS) for Windows 13.0 program was used for all statistical analyses in the study. While evaluating the study data, Student’s t-tests were used to compare normally distributed data between groups in a comparison of quantitative data, as well as descriptive statistical methods (e.g. mean, standard deviation and frequency). Chi‑square tests and Fisher’s exact chi-square tests were used to compare qualitative data. The results were evaluated at a 95% confidence interval, and the significance level was p < 0.05. 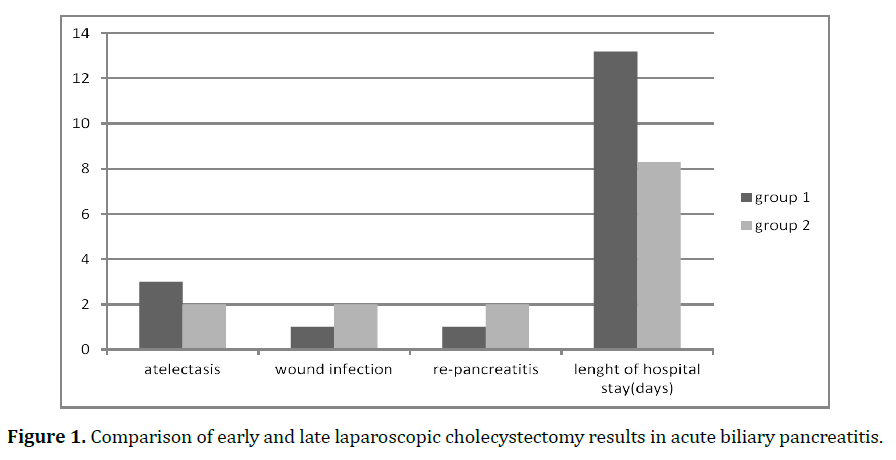 In the past, there were opinions stating that the anatomy of Calot’s triangle was difficult to evaluate correctly in procedures performed immediately after an acute pancreatitis attack and that dissection performed in this area was both difficult and dangerous [6, 24]. It has been reported that 16-18% of patients have been switched to a laparotomy due to dissection difficulties in LC operations due to ABP [25-27]. However, in recent years, there are studies that have reported the exact opposite of this view. It has been reported that the rate of complications and the transition to a laparotomy in cholecystectomy performed in the early period after a mild biliary pancreatitis are similar to patients who underwent an interval cholecystectomy [19, 28, 29]. In some studies, it has been reported that adhesions and fibrosis around the gallbladder are more common in an interval cholecystectomy, and this phenomenon makes the operation difficult [30]. In our study, a similar rate of complications and transitions to laparotomy were observed in LC in the early and late periods due to ABP. Although no criteria were used in our study regarding the difficulty of LC dissections, the fact that the operation time and complication rates were similar in both groups suggest that an early cholecystectomy did not cause additional operation difficulties. The most important support of the views advocating an early cholecystectomy is the high rate of recurrent biliopancreatic events occurring during the waiting period in patients undergoing an interval cholecystectomy. In the literature, recurrent biliary events have been shown to develop in up to 18% of patients during the 4-8 week waiting period [13]. In our study, recurrent biliopancreatic events were observed in 8.7% (2/23) of the patients. There are two different approaches to an early cholecystectomy in ABP. The first approach is to perform a cholecystectomy within the patient’s arrival hour. In two studies involving a limited number of patients in which this approach was evaluated, it was reported that this approach was safe, and the length of hospital stay was shorter in this group [31, 32]. However, it has also been reported that the disease progressed to severe pancreatitis in 15% of patients who were evaluated as mild ABP at the first admission [33, 34]. Interventions performed without waiting for the regression of clinical findings and laboratory values may cause serious levels morbidity and mortality. Because of this view, the other approach in ABP is to perform a cholecystectomy after clinical improvement and normalization of laboratory findings. In various studies comparing this approach with an interval cholecystectomy, it has been shown that early cholecystectomies are performed with similar complication and exposure rates [19, 28, 29]. We prefer this approach, considering that it is safer to perform a cholecystectomy in ABP after a clinical recovery and laboratory values have returned to normal.

Compared to an early LC, patients with an interval LC had a higher rate of recurrent biliopancreatitis (Group 1: 4.5%; Group 2: 8.7%) due to during the waiting period. As a result, the durations of hospital stays were significantly longer due to re‑hospitalizations. Similar results have been reported in other studies [19, 28, 29, 35]. The fact that our study was retrospective, and the number of patients was limited comprise the most important limitations to our study. Patients who received only medical treatment for acute pancreatitis (non-operative patients), emergency intervention (ERCP, laparotomy, necrosectomy, drainage, etc.) and patients with a history of chronic pancreatitis and alcohol use were excluded from the study.

There is still no consensus about the timing of cholecystectomy in patients hospitalized with an ABP diagnosis. Although it prolonged the LC time due to adhesions, and there was some difficulty in dissection and a bleeding risk in the early treatment of ABP, there was no difference in the postoperative hospitalization periods in terms of complications. In this study, after the ABP picture regresses, a cholecystectomy can be applied safely. We believe that an early LC should be performed to protect patients from complications of acute pancreatitis attacks that may develop later.