A Triad of Complete Dorsal Pancreatic Agenesis, Pancake Kidney and Bicornuate Uterus. An Association or an Incidental Finding: First Case in Literature

Context Agenesis of the dorsal pancreas is a rare congenital anomaly which can be detected either incidentally during imaging or encountered during investigation for pancreas related pathologies such as pancreatitis or diabetes mellitus. Few associations of this condition with heterotaxy syndrome, pancreatic tumors and congenital heart disease have been described. Case report We report a novel association of genitourinary anomalies in a case of complete dorsal pancreatic agenesis not previously described in the literature. Conclusion Knowledge about dorsal pancreatic agenesis is essential for radiologist in patients presenting with unexplained pain abdomen and its association with various conditions may help radiologist in assisting clinician in management of these patients.

Congenital anomalies of pancreas are a relatively rare group of anomalies among which dorsal pancreatic agenesis is far less commonly encountered with less than 100 cases reported in world literature. The pancreas develops from two endodermal buds arising from the foregut at level of the duodenum – the dorsal and ventral buds while the genitourinary system is conventionally considered to develop from the intermediate mesoderm of the embryo. We illustrate the CT and MRI findings in this patient of unexpected occurrence of dorsal pancreatic agenesis with pancake kidney and bicornuate uterus.

A forty five year old woman presented with intermittent pain abdomen in epigastrium and left hypochondrium for 6 months. USG abdomen revealed absent bilateral kidneys in renal fossa with midline fused kidneys in pelvis. CECT abdomen was performed for evaluation of kidneys which revealed pancake kidney with bicornuate uterus and dorsal pancreatic agenesis (Figure 1). Liver, gallbladder, common bile duct and spleen were normal. Blood glucose level was normal on repeated examinations (less than 90 mg/dL during fasting and 106 mg/dL post-prandial) and urine showed pus cells on repeated examinations. However, urine culture was sterile. Exact cause of pain abdomen in this patient could not be found on imaging. So, she was advised to follow low fat diet and frequent light meals in view of possible cause of pain due to higher pancreatic duct pressure/enzyme hypersecretion or sphincter of Oddi dysfunction. She is short statured with short hand and fingers and left microphthalmia without any vision in left eye since birth. Patient has a male child diagnosed with congenital aplastic anemia likely Fanconi anemia and he is transfusion dependent since infancy. The child has facial anomalies and short fingers with bilateral cryptorchidism, however kidneys were normal. 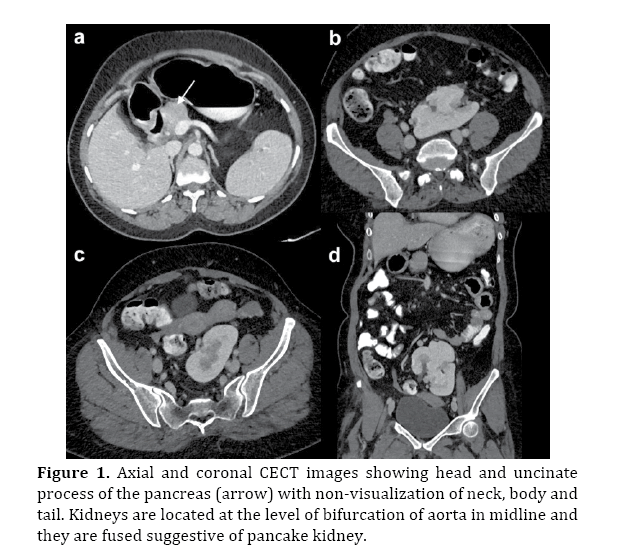 Figure 1. Axial and coronal CECT images showing head and uncinate process of the pancreas (arrow) with non-visualization of neck, body and tail. Kidneys are located at the level of bifurcation of aorta in midline and they are fused suggestive of pancake kidney.

The pancreas is a lobulated retroperitoneal organ consisting of head, neck, body and tail which develops from dorsal and ventral pancreatic buds which arise as focal outpouchings from the duodenum at 4 weeks of life. At approximately the seventh week of life the ventral bud which has a constant relationship with the bile duct, rotates along with it around the duodenum such that it attains a posterior relation to the dorsal bud.

The ventral bud forms the posterior part of the pancreatic head and uncinate process which drains through major duct (duct of Wirsung). The anterior part of pancreatic head, the neck, body and tail drain through the minor duct (duct of Santorini) and they are embryologically derived from dorsal endodermal bud and the consequence of its developmental failure is dorsal pancreatic agenesis which is classified as partial or complete. The minor papilla, the accessory duct and pancreatic neck, body and tail are absent in complete agenesis. In partial subtype, remnant of accessory pancreatic duct and minor papilla are present with variable amount of pancreatic body.

Dorsal pancreatic agenesis presents clinically with abdominal pain which can be due to pancreatitis although it is an incidental finding on imaging in most patients. On imaging this gives an appearance of foreshortened pancreatic parenchyma with abrupt termination beyond the head with no demonstrable minor duct or minor duodenal papilla. Agenesis of ventral pancreas and complete agenesis of the pancreas are lethal conditions [1].

Pseudo-agenesis of the pancreas refers to the atrophy of the pancreatic body and tail secondary to acute/chronic pancreatitis with sparing of the head and uncinate process. MRCP/ERCP provide conclusive diagnosis in this condition by demonstrating minor ductal system in pseudoagenesis due to acquired pancreatic atrophy and its absence in dorsal pancreatic agenesis / pancreatic hypoplasia [2] (Figures 2, 3, and 4). Ultrasound is relatively insensitive in this regard and CT may not be sensitive always. 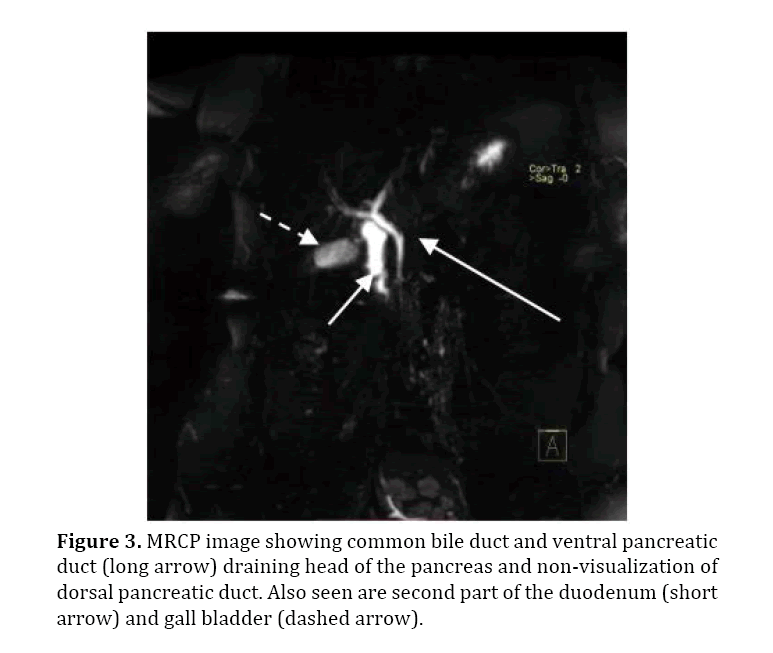 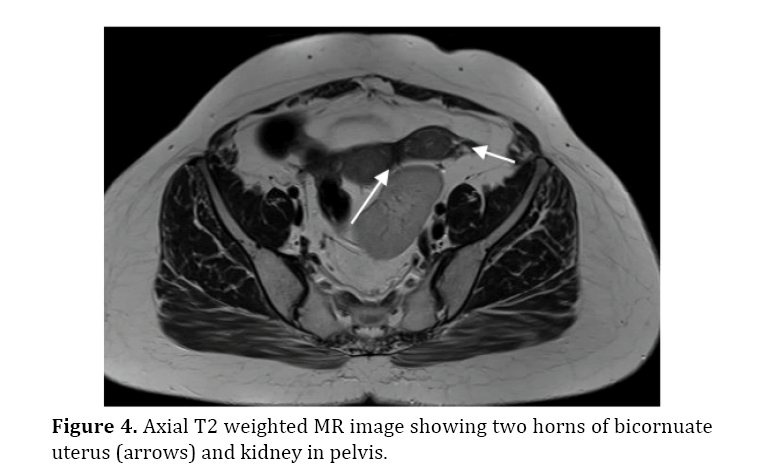 The exact genetic abnormality leading to this condition is not yet known but some anomalies in the retinoic acid and hedgehog signaling pathways have been described [2]. Autosomal dominant, X-linked inheritance and sporadic occurrence have been described. Various associated conditions described with dorsal pancreatic agenesis include heterotaxy [3], congenital heart disease such as septal defects [4], solid pseudopapillary tumor of pancreas [5] and pancreatic adenocarcinoma [6].

This disorder is usually asymptomatic and diagnosis being incidental. If symptomatic the most common presentation being pain abdomen followed by hyperglycemia and rarely diabetes mellitus, acute or chronic pancreatitis. Typically pain abdomen is in epigastric region and aggravated by food intake which could be due to lack of papillary muscles [7, 8]. Pancreatitis may occur due to compensatory hypersecretion of enzymes from enlarged ventral gland, higher pancreatic duct pressure or sphincter of Oddi dysfunction [8]. Hyperglycemia is seen in 50% of these patients due to loss of islets cells seen predominantly in body and tail of the pancreas [9].

Having come across dorsal pancreatic agenesis, pancake kidney and uterine malformation, the embryology of genitourinary and female reproductive system were pursued. The genitourinary system develops from the intermediate plate mesoderm. The kidneys develop from the metanephros which appears in the 5th week of embryonic life, Initial topographical location of kidneys being pelvis followed by gradual ascent to its intraabdominal retroperitoneal location opposite D11-L3 vertebral level [10]. Various fusion anomalies of the kidney have been described including horse-shoe kidney, cross fused kidney and pancake kidney. In pancake kidney the two primitive renal anlages fuse across the midline to form a single globoid mass of renal parenchyma drained by either single or two separate ureters. The pancake kidney is usually limited in its ascent and remains pelvic in location.

The uterus, fallopian tubes and the upper part of the vagina develop from the paramesonephric ducts which develop as an outpouching from the urogenital ridge along the posterior abdominal wall. The caudal part of these ducts fuse to form single uterine cavity while the cranial parts remain separate to form the paired fallopian tubes. Failure/ anomalous development/ lack of fusion of these ducts are not uncommon giving rise to myriad of mullerian anomalies and the imaging technique of choice for evaluation is MRI. These have been classified by the American fertility society into various classes of which bicornuate uterus represents class IV. On imaging bicornuate uterus is characterised by deep fundal cleft >1 cm, increased intercornual distance of >4 cm and intercornual angle of >105 degrees [11-12].

The embryological development of these organs- the pancreas, kidney and uterus- appears seemingly disparate with the pancreas being endodermal origin and the genitourinary system mesodermal in origin. Hence, the occurrence of anomalies involving all these organs in a single patient must alert us to the probability of existence of an as yet unknown common developmental / genetic signaling pathway shared between these organ systems.

Knowledge about dorsal pancreatic agenesis is essential for radiologist in patients presenting with unexplained pain abdomen and its association with various conditions may help radiologist in assisting clinician in management of these patients.