Context Acute drug induced hepatitis has not been commonly associated with epidermal growth factor receptor (EGFR) inhibitors. Hepatotoxicity seen with erlotinib, a small molecule tyrosine kinase inhibitor to EGFR, is usually transient with mild elevation of transaminases. Case report We report a case of acute severe hepatitis resulting from erlotinib monotherapy in a patient with locally advanced pancreatic cancer. Hepatotoxicity resolved once erlotinib was discontinued and serum transaminases returned to baseline normal values. Conclusions Acute severe hepatitis though rare is occasionally observed with EGFR inhibitors gefitinib or erlotinib. As EGFR inhibitors are now incorporated with chemotherapy in advanced pancreatic cancers, clinicians should be aware of this potential complication.

Pancreatic cancer ranks as the fourth leading cause of cancer death in the United States [1]. Due to advanced nature of the disease at presentation, most cases are not surgically resectable. Overall survival rate for advanced pancreatic cancers is poor with less than 1% of patients alive at 5 years [2]. Gemcitabine is the standard of care for patients with locally advanced or metastatic cancer of the pancreas, based on the results of the multi-centered randomized, phase III clinical trial that compared 5-fluorouracil (5-FU) to gemcitabine [2]. In this study, treatment with gemcitabine resulted in a relative improvement of 36% in median survival (5.7 months vs. 4.2 months, gemcitabine vs. 5-FU). While combination chemotherapy with gemcitabine have not shown any significant benefit in terms of overall survival, in recent studies with gemcitabine and capecitabine and with EGFR antagonist, erlotinib have shown some survival benefit [3, 4, 5]. The combination of gemcitabine with the EGFR inhibitor erlotinib provided a modest 2-week improvement in overall survival compared to gemcitabine alone in the study conducted by the National Cancer Institute of Canada Clinical Trials Group. The study showed a 1-year survival rate of about 24% among patients who received both gemcitabine and erlotinib, compared to 17% of the group who received gemcitabine alone [5].

A 70-year-old man was diagnosed with pancreatic cancer when he presented with painless jaundice. An ERCP showed high grade pancreatic duct dilatation, and a 2.5 cm tumor was identified in the head of pancreas in the CT scan. A CA 19-9 was elevated at 1,626 U/mL (reference range: 0-35 U/mL). After undergoing sphincterotomy and biliary stent placement, he underwent laparotomy and Whipple procedure. Final pathology disclosed poorly differentiated adeno-carcinoma: 2.8 cm tumor size with one out of 12 peripancreatic nodes positive for tumor. He was started on chemotherapy with gemcitabine at 1,000 mg/m2 and after 4 months of treatment his CA 19-9 declined to 67 U/mL. Upon discontinuation of therapy, patient was observed with CA 19-9 which increased to 255 U/mL at 5 months. Imaging studies did not show any evidence of recurrent pancreatic cancer. Patient opted to undergo further treatment due to rising tumor marker levels up to 975 U/mL and was initiated on single agent erlotinib at 100 mg daily dose after its recent approval with gemcitabine for locally advanced pancreatic cancer. Two weeks after starting treatment with erlotinib, SGOT, SGPT and alkaline phosphatase levels increased to 86 U/L, 155 U/L and 224 U/L from baseline values of 39 U/L, 70 U/L and 138 U/L, respectively (reference ranges; SGOT: 12-34 U/L; SGPT: 25-65 U/L; alkaline phosphatase: 50-136 U/L). Patient was not taking other concomitant hepatotoxic medications and did not have any underlying liver dysfunction. Therapy with erlotinib was discontinued in two weeks, when liver function tests further worsened. Peak levels were seen at two weeks after discontinuation of erlotinib (SGOT: 425 U/L; SGPT: 580 U/L; alkaline phosphatase: 618 U/L). A viral hepatitis panel was obtained and results were negative for hepatitis B and C infections. A magnetic resonance of the abdomen showed mild intrahepatic ductal dilatation without any mass lesion. Values of transaminases returned to baseline 6 weeks after discontinuation of erlotinib (Figure 1). Serum bilirubin levels remained within normal limits. Significant elevation of aminotransferases and alkaline phosphatase levels above normal observed after starting treatment with erlotinib, and the decline of these values after discontinuation of erlotinib, suggests drug induced hepatitis rather than hepatitis due to progressive tumor. 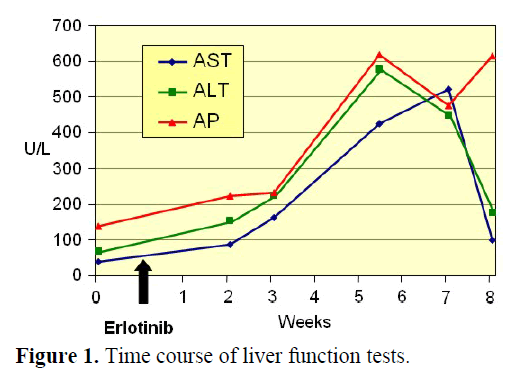 With rising CA 19-9 (9,998 U/mL) and alkaline phosphatase (615 U/L) levels, patient was started on chemotherapy with gemcitabine alone without erlotinib. A CT scan showed intrahepatic biliary dilatation without any tumor. Patient had further reductions in CA 19-9 as well as normalization of alkaline phosphatase after four cycles of chemotherapy with gemcitabine.

Pancreatic cancer constitutes up to 2% of newly diagnosed cancers in the United States, but ranks as the fourth-leading cause of cancer deaths [1]. So far, chemotherapy combinations have not provided any significant improvement in overall survival. Thus chemotherapy with gemcitabine remains the standard of care. FDA recently approved the combination gemcitabine with erlotinib for first line therapy of advanced pancreatic cancer based on modest 2-week improvement in overall survival compared to gemcitabine alone.

Pancreatic cancer constitutes up to 2% of newly diagnosed cancers in the United States, but ranks as the fourth-leading cause of cancer deaths [1]. So far, chemotherapy combinations have not provided any significant improvement in overall survival. Thus chemotherapy with gemcitabine remains the standard of care. FDA recently approved the combination gemcitabine with erlotinib for first line therapy of advanced pancreatic cancer based on modest 2-week improvement in overall survival compared to gemcitabine alone. seen on day 1 of patients experiencing cutaneous toxicity with erlotinib [7]. Our patient did not develop rash or diarrhea with erlotinib.

Erlotinib is predominantly metabolized in the liver via cytochrome P450 system, by the enzyme P450 3A4, and excreted in the bile. The mean peak level of the principal metabolite of erlotinib, OSI-420 (O-demethylated derivative), was 0.09 μg/L on day 1 of administration of 150 mg once daily and accumulation of the metabolite was not seen after subsequent dosing in clinical trial patients [7]. No significant liver function test abnormalities were noted at dose level of 150 mg/day with chemotherapy in advanced non-small-cell lung cancer in the TRIBUTE study [10]. In the phase I study by Hidalgo et al., grade 1 hyperbilirubinemia occurred in patients with advanced solid tumors which was not associated with elevated hepatic transaminases [7]. Among 42 patients with advanced biliary malignancies treated with erlotinib, grade 3 toxicity was noted in one patient (0.2%) and one of the 38 patients with hepatocellular carcinoma had developed grade 3 liver enzyme elevation at 150 mg/day dose level [13, 16, 18]. Recent phase III study of gemcitabine with erlotinib (100 mg/day) or placebo in patients with advanced pancreatic malignancies, showed no statistically signific-ant elevation in grade 3 liver toxicity with addition of erlotinib, although 10% grade 3 elevation of aminotransferases were reported in both the groups [5].

It is however recommended that liver functions be closely monitored in those with hepatic impairment, who are also on other cytochrome P450 3A4 inhibitors such as ketoconazole, clarithromycin, voriconazole, etc. These drugs may increase both the action of erlotinib and erlotinib induced toxicity by inhibition of cytochrome P450 3A4. Our patient was not on any other drugs that could increase the risk of hepatotoxicity of erlotinib.
In conclusion, we report a case of acute drug-induced hepatotoxicity secondary to erlotinib. Grade 3 and 4 elevations in transaminases are uncommon after single agent gefitinib and erlotinib. There has been one published case report in the literature of gefitinib induced acute hepatotoxicity in a patient treated for lung cancer by Ho et al. [11]. Acute hepatotoxicity may be more commonly seen in patients receiving therapy for hepatobiliary malignancies with EGFR inhibitors. As erlotinib is now commonly incorporated into treatment of advanced pancreatic cancer, it is important that clinicians are aware of this potential complication in practice.