Neuroendocrine tumors are a heterogeneous group of tumors with cells of neuroendocrine differentiation that arise fromdiverse anatomic sites with varying morphologic and clinical features. Since the natural history and prognosis varies widelybetween individual neuroendocrine tumor types, there is a critical need to identify accurate prognostic and predictivebiomarkers and markers predictive of therapeutic efficacy. To date, plasma chromogranin-A levels have generally beenaccepted as the most useful biomarker, despite the fact that there are substantial concerns in sensitivity and discrepancies in measurement techniques. As a consequence, considerable attention has been focused upon the development of novelbiomarkers that can be utilized with more clinical efficacy than chromogranin-A. In addition to amplifying thediagnostic/prognostic landscape, the need to calibrate the efficacy of biological targeted therapy has further accelerated thedevelopment of molecular biomarkers. At the 2013 American Society of Clinical Oncology (ASCO) Annual Meeting, Chou et al. (Abstract #e15151) presented data that chromogranin A levels can be monitored during treatment to predict clinicaloutcome. Modlin et al. (Abstract #4137), demonstrated a promising novel biomarker, serum multi-transcript molecularsignature. Grande et al. (Abstract #4140), Heetfield et al. (Abstract #e15071) and Casanovas et al. (Abstract #4139)described sVEGFR2, p-mTOR and IGF1R as molecular markers with potential for use in targeted therapy trials. The authorsreview and summarize these abstracts in this article.

Neuroendocrine tumors (NETs) are a diverse family of tumors originating in neuroendocrine cells distributed ubiquitously throughout the body. The most common NETs are gastroenteropancreatic (GEP)-NETs and carcinoids. The incidence is 5.25 cases per 100,000 persons and the prevalence may exceed 100,000 in the United States [1, 2]. They exhibit protean symptomatology and a spectrum of biological behavior [3]. The widely divergent biological behavior of individual NETs reflects their origin from a variety of neuroendocrine cell types (e.g., beta, G, EC and ECL cells) [4]. As a consequence, response to treatment and outcomes also vary considerably. For instance, stage IV gastrointestinal NETs exhibit a 5-year survival of 40.3% [5] compared to 15.5% for pancreatic NETs [1]. Current strategies in predicting prognosis include staging at surgery, histopathological assessment, Ki-67 index and grading [6]. Of particular relevance is the utility of biomarkers such as chromogranin A (CgA) and specific hormone products (insulin, gastrin, serotonin, etc.) of functional NETs, though the latter have become less used in recent times as CgA has been regarded as the most useful single measurement [3].

Chromogranin A levels, which represents a constitutive neuroendocrine secretory protein, is the most widely accepted biomarker. CgA was compared to a panel of biomarkers and proved to be the most accurate, with a specificity of 85.7% and sensitivity of 67.9% [7]. CgA is elevated in 60-80% of patients with neuroendocrine tumors. Elevated CgA levels correlate with disease burden and poor outcomes [8]. Serial CgA testing is being investigated to determine treatment response. In pancreatic NETs, early declines in CgA levels during treatment with chemotherapy and everolimus were associated with improved prognoses [9, 10]. However, the utility of serial CgA for monitoring treatment response still remains to be prospectively established [11]. The National Cancer Institute (NCI) recommends that serial measurements of CgA be incorporated into prospective clinical trials [12].

There is widespread recognition that CgA exhibits significant limitations as a single moiety, with concerns regarding both sensitivity and specificity. Since elevated CgA levels are found in cardiac, endocrine and inflammatory diseases, its specificity has been challenged, with reports of 10- 35% specificity in GEP-NETs [13]. CgA is not expressed by 25% of NETs, resulting in a lower sensitivity [14]. As such, CgA has not yet been accepted by the FDA [15] and is a Category 3 (with major disagreement) National Comprehensive Cancer Network (NCCN) recommendation [16]. Thus, it has become axiomatic that other strategies are required and consequently alternative novel biomarkers are being examined.

The “success” of everolimus and sunitinib in the treatment of pancreatic NETs has emphasized the strategy of targeting angiogenesis and the PI3K/AKT/mTOR pathway. The major challenge in the targeted era is not only the varying responses to biological agents seen among diverse NETs but the need to develop techniques to predict efficacy [17]. Potential molecular biomarkers are therefore a source of substantial investigation. At this time, despite a paucity of rigorous evidence, the NCI recommends measuring methylguanine DNA methyltransferase (MGMT) expression to predict response in trials of alkylating agents and obtaining perfusion CT scans to measure decreases in tumor blood flow in trials of angiogenesis inhibitors [12]. The development of accurate and specific molecular biomarkers to tailor various molecular therapies to different NETs populations is a major unmet need.

What Did We Learn at the 2013 ASCO Annual Meeting?

Chou et al. (Abstract #e15151) measured plasma chromogranin A level and abdominal CT scan at baseline and every 3 to 6 months after starting treatment in a retrospective study of 54 Asian patients with advanced gastroenteropancreatic NETs. Eighty-five percent had elevated baseline CgA level. Patients with lower baseline CgA levels (less than twice the upper limit of reference) had longer overall survival compared to those with higher levels (hazard ratio (HR)=0.39, 95% confidence interval (CI): 0.15-0.99), even after adjustment for other variables. Serial CgA levels were evaluated in 28 patients with a total of 81 measurements. A lower increase of CgA levels (less than 15%) predicted favorable antitumor response with a sensitivity of 86% and specificity of 91%. The authors concluded that these results demonstrated that measuring baseline and serial CgA levels may be used to predict clinical outcome and tumor response [18] (Table 1). 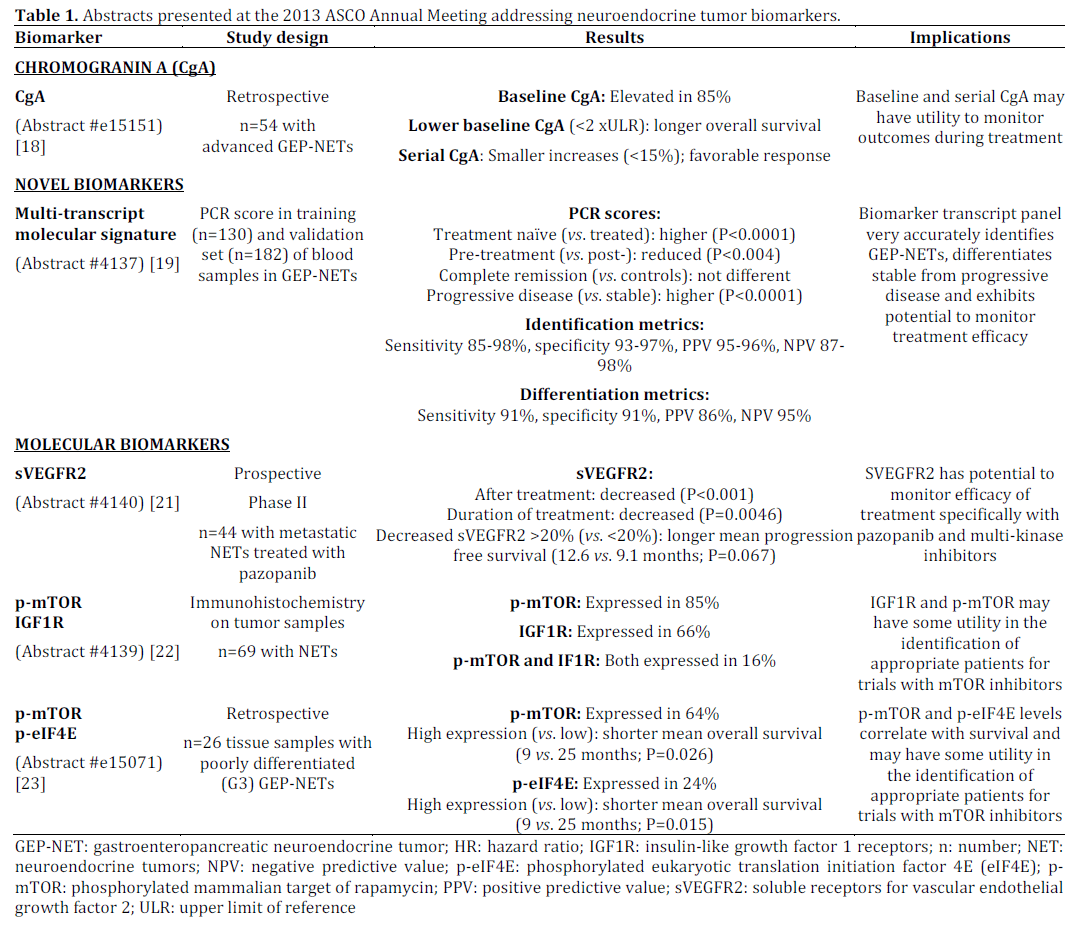 Modlin et al. (Abstract #4137) presented a novel candidate blood biomarker, a multi-transcript (n=51 genes) molecular signature measured by a serum RT-PCR and analyzed using a novel series of mathematical algorithms (Figure 1). They compared it to plasma CgA levels at baseline and following treatment. PCR scores were determined for GEPNETs (n=63; treatment-naïve: n=28) in a training set and validated in an independent set. In the treatment-naïve GEP-NETs group, the PCR score was significantly elevated (P<0.0001) compared to the treated group. In the 11 matched pre- and posttreatment samples, PCR levels were significantly reduced (P<0.004) post-treatment. In the independent validation set, the PCR scores for complete remission were not different to controls (0.5±0.25 vs. 0.4±0.16), while PCR scores for stable disease (0.63±0.12) were lower than for nonresponders (5.85±0.34; P<0.002). PCR scores in progressive disease were significantly higher than for stable disease (85% vs. 10%, P<0.0001). For identification, the multi-transcript gene signature demonstrated a high sensitivity (85-98%), specificity (93-97%), positive predictive value (PPV) (95-96%) and negative predictive value (NPV) (87-98%). Likewise, in detecting differentiation between stable and progressive disease, the biomarker also exhibited high sensitivity (91%), specificity (91%), PPV (86%) and NPV (95%), significantly outperforming plasma CgA testing (P<0.005). This study demonstrated that the MTMS is a promising novel multifactorial neuroendocrine specific biomarker to detect NETs with the potential for measuring response to treatment [19, 20] (Table 1). 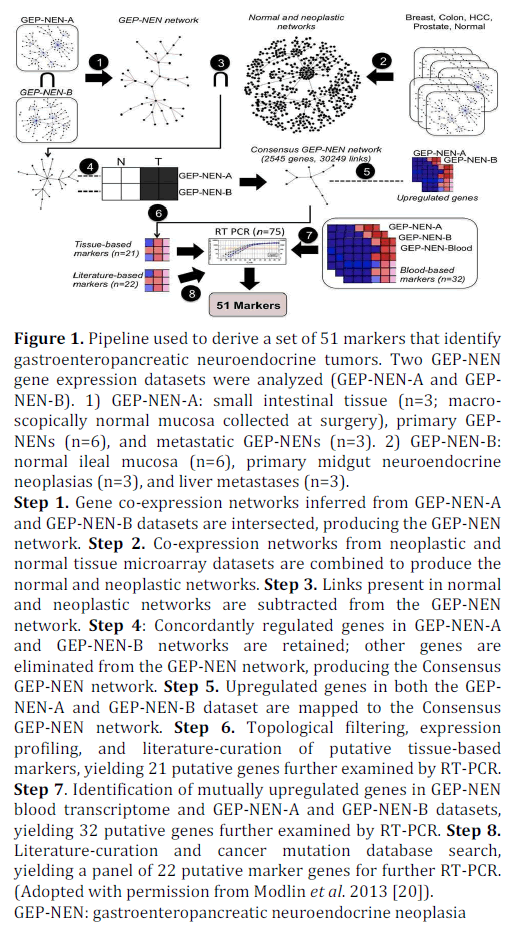 Grande et al. (Abstract #4140) assessed soluble receptor for vascular endothelial growth factor 2 (sVEGFR2) in predicting clinical outcome in patients with metastatic NETs treated with pazopanib, a multi-tyrosine kinase/VEGF inhibitor. Biomarkers were assessed at baseline and after 12 weeks of treatment. sVEGFR2 levels were found to be decreased at 12 weeks (median decrease: 20%, P<0.0001), as well as with a longer duration of treatment (P=0.0046). Patients with a greater decrease in sVEGFR2 (more than 20% decrease vs. less than 20%) trended towards an improved mean progression free survival (12.6 vs. 9.1 months) (P=0.067) [21] (Table 1).

Casanovas et al. (Abstract #4139) described the activation status of insulin-like growth factor 1 receptors (IGF1R)-mTOR pathway by immunohistochemistry in 69 tumor samples of NETs. IGF1R was expressed in 66% and phosphorylated mTOR (pmTOR) was expressed in 20% (lower than expected). Expression of both molecular markers, indicating consistent activation of the IGF1R-mTOR pathway, was only found in 16%. A subgroup of ileal NETs showed consistent activation of both IGF1R and p-mTOR [22] (Table 1).

In neuroendocrine tumor management, biomarkers are of critical value since the use of imaging in a disease that is often indolent has significant limitations. In addition they have the potential to detect disease early, risk stratify patients and monitor response to treatment. Chromogranin A, a neuroendocrine secretory protein, has obvious biological limitations in predicting cell proliferation and therapeutic efficacy. Although it is a widely used biomarker, the limitations of a mono-marker are apparent and considerable further validation in measuring therapeutic response is required. In particular the dependence upon a single agent (CgA or pancreastatin) or minor combinations thereof represents a vulnerability when seeking to predict biological behavior that represents a summation of a multiplicity of gene regulated events that reflect cell proliferation, metastasis or drug sensitivity. As a consequence of these limitations, new biomarkers are being developed. The movement towards biological targeted therapy has emphasized the importance of identifying biomarkers that will enable clinicians to identify patients who will most likely respond to specific molecular agents or be able to define early evidence of therapeutic efficacy.

The 2013 ASCO Annual Meeting presented important advances in neuroendocrine biomarkers. Chou et al. (Abstract #e15151) showed that lower levels of CgA predicted significantly improved survival and a favorable response to treatment, providing evidence that baseline and serial CgA levels may be used to monitor clinical outcome [18]. Modlin et al. (Abstract #4137) demonstrated that a multi-transcript molecular signature for PCR blood analysis outperformed CgA levels in identifying GEP-NETs and in detecting differences in response [19]. Grande et al. (Abstract #4140) noted that in patients treated with pazopanib, sVEGFR2 levels were decreased after treatment and a quantitatively larger decrease was associated with improved progression free survival [21]. sVEGFR2 may have potential as a molecular marker in VEGF and multikinase inhibitor therapy. Casanovas et al. (Abstract #4139) found that while a majority of NETs express IGF1R, only a small subset demonstrate activation of the IGF1R-mTOR pathway [22]. p-mTOR and IGF1R expression could potentially help stratify patients in future clinical trials. Heetfeld et al. (Abstract #e15071) showed that in poorly differentiated NETs, high expression of phosphorylated p-mTOR and its downstream effector, p-eIF4E was associated with a significantly shorter survival [23]. The identification of these pmTOR and p-eIF4E raise the possibility, albeit limited, that in individuals with aggressive poorly differentiated NETs, mTOR inhibitors may be reasonable to evaluate in trials. However, given that mTOR inhibitors may be of limited value in indolent disease [24], this proposal may seem quixotic to some. Further studies are needed to validate these markers and define their clinical significance.