Chronic Pancreatitis in a Patient with Malnutrition Due to Anorexia Nervosa

Pancreatitis is associated with eating disorders [1, 2, 3]. We report a case of a 25-year-old female patient suffering from anorexia nervosa and severe malnutrition presenting with repeated attacks of pancreatic pain and an enlarging cystic lesion in the head of the pancreas.

A 25-year-old healthy female smoker presented after three years of worsening epigastric pain radiating to her back. She reported no use of medications for the preceding 8 years. She had experienced multiple previous admissions for similar pain. She had an established diagnosis of restrictive type anorexia nervosa, with a BMI of 12.5 kg/m2 at its worst. She had a significant history of alcohol abuse beginning three years prior to presentation and consisting of a bottle (750 milliliters) of gin or whiskey consumed over 3-4 days on average. She was not jaundiced and her liver function tests did not suggest obstruction.

Abdominal ultrasound lead to the discovery of a cystic lesion in the head of her pancreas, confirmed on CT scan (Figure 1). The scan demonstrated a hypodensity and suggested internal septations with the possibility of a solid component. No other features supported a diagnosis of chronic pancreatitis. A provisional diagnosis of a symptomatic cystic, possibly mucinous, neoplasm of the pancreas was made. Initial management included treatment of her anorexia and malnutrition allowing for nutritional recovery as she was not fit for surgery. This also enabled evaluation of the cyst during this period. Subsequently, follow up CT abdomen (Figure 2) at 3 months showed the lesion to be enlarging. 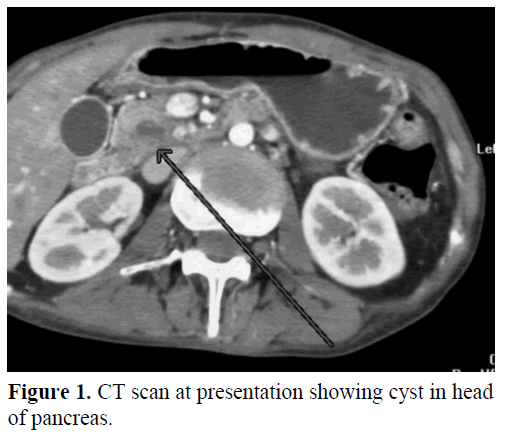 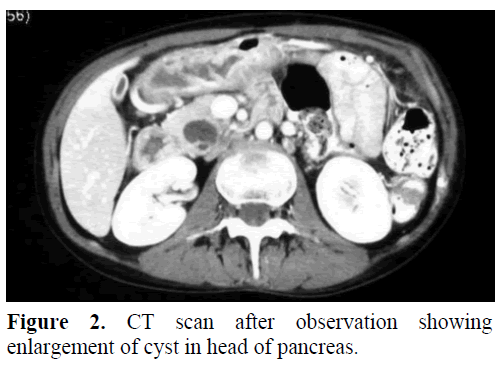 Figure 2. CT scan after observation showing enlargement of cyst in head of pancreas.

ERCP (Figure 3) was performed to further evaluate the cyst, revealing a normal pancreatic duct which did not communicate with the cyst. No mucin was visualized at the ampulla. Brush cytology demonstrated atypical cells. A pancreaticoduodenectomy procedure was performed when her weight had recovered to 46 kg (BMI 16.5 kg/m2). Intraoperative cytology showed only normal acinar and ductal cells, and intraoperative ultrasound confirmed a 3 cm cyst in the head of the pancreas. Subsequent histology of the resected specimen identified chronic fibrosing pancreatitis, a pseudocyst and a stone occluding the main pancreatic duct. No evidence of a cystic neoplasm or malignancy was found in the specimen. Her postoperative recovery was uneventful. At one-year followup her weight had improved to 53 kg and she had remained pain free. In addition, she continued to abstain from alcohol and had resumed her previous employment.

The pathogenesis of chronic pancreatitis is complex and thought to be due to several mechanisms. Etiology/risk factors have been categorized by the Midwest Multicenter Pancreatic Study Group (TIGAR-O system [4]) as: 1) toxic-metabolic; 2) idiopathic; 3) genetic; 4) autoimmune; 5) recurrent and severe acute pancreatitis; 6) obstructive.

Different hypotheses for the pathogenesis of chronic pancreatitis have been proposed. Braganza et al. first suggested the central role of oxidative stress in pancreatic disease [5]. Further clinical and experimental studies have provided data which strengthens the evidence that supports an imbalance between oxidative stress and reduced antioxidant capacity as important in pancreatic injury [6]. Activation of pancreatic stellate cells is now being seen to be central in the fibrogenesis of chronic pancreatitis after pancreatic injury and the important role these cells play in pancreatic diseases is being elucidated [7, 8, 9]. Important mediators involved in the activation or differentiation of pancreatic stellate cells include TNF-alpha, IL1, IL6, TGF-beta1 among others [8]. Oxidant stress is also important in the activation of stellate cells [7]. Cases of acute pancreatitis (with one described as severe acute pancreatitis) have been documented in association with malnutrition seen in anorexia nervosa, bulimia nervosa, and major depression as well as pancreatitis occurring with refeeding in anorexic individuals [1, 3]. Recurrent acute pancreatitis has also been associated with malnutrition in anorexia [1]. A search of the medical literature has only revealed one other documented case of pseudocyst development in a patient with chronic pancreatitis and an eating disorder [2].

In addition protein energy malnutrition has been associated with increased levels of cytokines IL1, IL6 and TNF-alpha [20, 21, 22], with increased levels of IL1 and TNFalpha seen in malnourished patients suffering from anorexia nervosa [23]. These cytokines have been shown to be associated with chronic pancreatitis [24, 25, 26, 27] and the activation or differentiation of pancreatic stellate cells [8].

Furthermore, there is evidence that protein energy malnutrition, including anorexia nervosa, is associated with a depleted antioxidant status and subsequent susceptibility to oxidative stress and damage. This evidence includes an increase in red cell superoxide dismutase activity with decreased levels of the antioxidant vitamins A, E and C as well as serum ceruloplasmin, copper and selenium and whole blood glutathione peroxidase activity of protein energy malnourished children [28, 29, 30]. Diminished vitamin E levels and increased catalase activity in malnourished anorexic patients [31] has also been shown. Furthermore increased oxidative products including lipid peroxides and oxidized amino acids have been demonstrated in protein energy malnourished patients [31, 32].

Protein energy malnutrition as found in anorexia nervosa may be speculated to lead to acute and chronic pancreatitis through mechanisms including oxidative damage in a system with poor antioxidant reserves, with inflammatory damage involving IL1, IL6 and TNF-alpha. This results in activation of pancreatic stellate cells with ongoing inflammation and fibrosis and subsequent chronic pancreatitis.

Our patient did have a short history of significant alcohol abuse; however, we propose that is was not sufficient to alone induce chronic pancreatitis. Her indication for surgery was based on the presumption that she had a symptomatic cystic neoplasm. Cystic neoplasia and malignancy were excluded based on histology which confirmed chronic pancreatitis. The association between eating disorders and pancreatitis has been described. Patients presenting with malnutrition and recurrent epigastric pain should be investigated for pancreatic pathology and the possibility of pancreatitis and the presence of pseudocysts entertained