Less than 20% of pancreatic cancers at diagnosis are resectable at the time of presentation and nearly all patients die of their disease [1]. Locally advanced disease and metastases to other viscera are the most common reasons for precluding surgical resection [2]. Lymph node involvement in particular is associated with a poor prognosis [3]. Even following complete resection, the majority of patients with pancreatic cancer develop recurrent disease. The risk of recurrence is highest in those with lymph node involvement.

The details of two patients with concurrent lymphoma and pancreatic adenocarcinoma are summarized in Table 1. 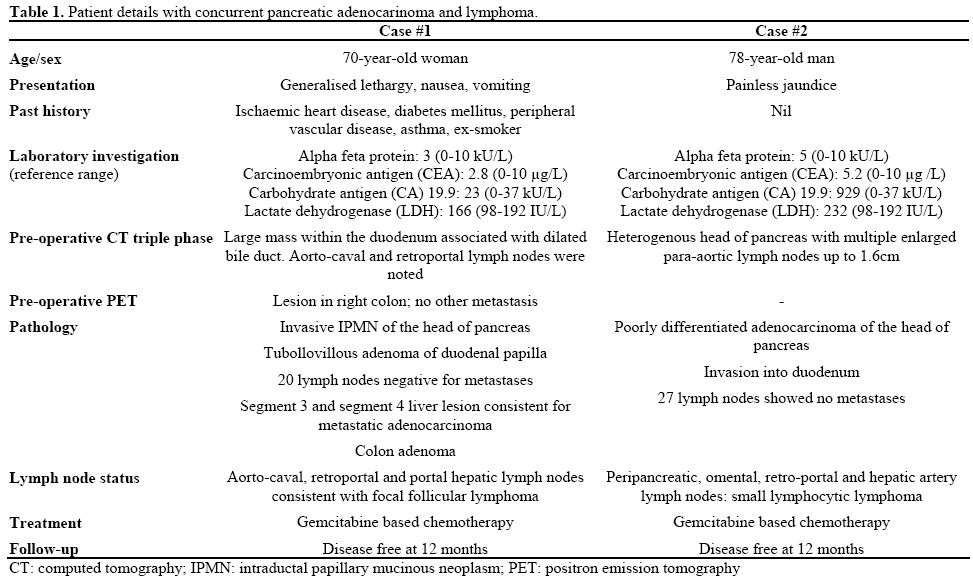 A 70-year-old lady with several months of general lethargy, intermittent nausea and vomiting had abdominal computed tomography (CT) showing a large mass within the duodenum and associated bile duct dilatation. Pre-operative tumour markers were unremarkable. Endoscopy showed a large tumour arising from the ampulla causing partial obstruction of the duodenum. Aorto-caval and retro-portal lymphadenopathy was noted on imaging (Figure 1ab). Positron emission tomography (PET) scan showed no obvious metastatic disease but a lesion in the right colon. At the time of surgery a large ampullary mass causing partial gastric outlet obstruction was noted as well as a mass in the caecum. A few indiscrete lesions were removed from the liver that on frozen section were not typical of malignancy. A classic pancreaticoduodenectomy with retroperitoneal lymph node dissection and right hemicolectomy was performed. Final pathology showed concurrent ampullary tubulovillous adenoma and pancreatic invasive intra-papillary mucinous neoplasia (IPMN) (Figure 1c) and a dysplastic colonic adenoma. There was no evidence of lymph node metastases, although several enlarged nodes were noted to contain grade 2 follicular lymphoma (Figure 1d). One of the liver lesions on permanent sections was consistent with metastatic pancreatic adenocarcinoma. Post-operative lactate dehydrogenase level (LDH) was normal. The patient had post-operative gemcitabine based chemotherapy and is tumour free on CT imaging 12 months following surgery. No treatment was given for the lymphoma due to the patient’s lack of symptoms. 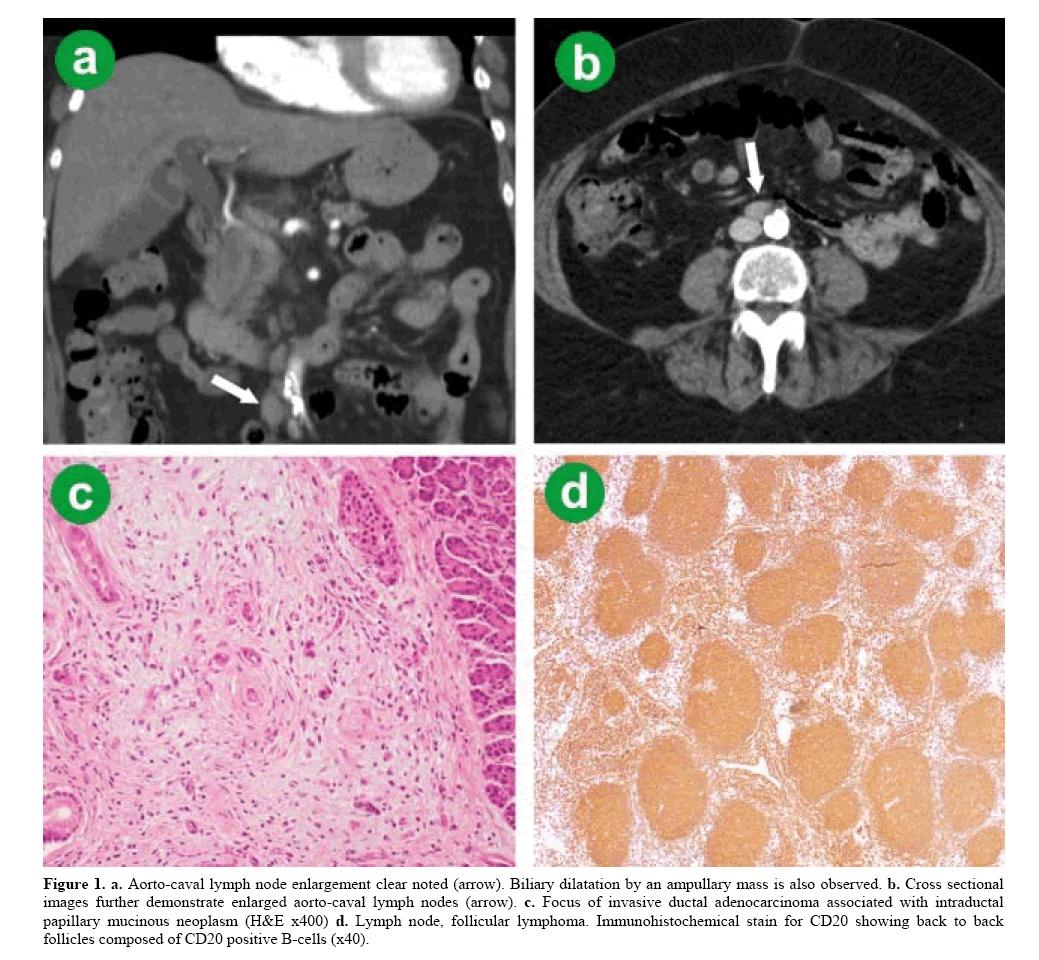 A 78-year-old man was investigated for painless jaundice and found to have a pancreatic mass. Preoperative tumour markers were normal. LDH level was slightly elevated at 232 (reference range: 98-192 IU/L). Multiple enlarged para-aortic lymph nodes were also noted (Figure 2ab). The patient underwent an uncomplicated classic pancreaticoduodenectomy and lymph node dissection. A 3 cm pancreatic ductal adenocarcinoma was removed without evidence of lymph-node metastases (Figure 2c). The lymph nodes however contained small lymphocytic lymphoma (Figure 2d). The patient received post-operative gemcitabine based chemotherapy for pancreatic cancer. The lymphoma had not been treated at the time of last review, due to the stable nature of the disease on CT imaging and lack of symptoms. He is alive and well without obvious pancreatic cancer recurrence at 12 months follow-up. 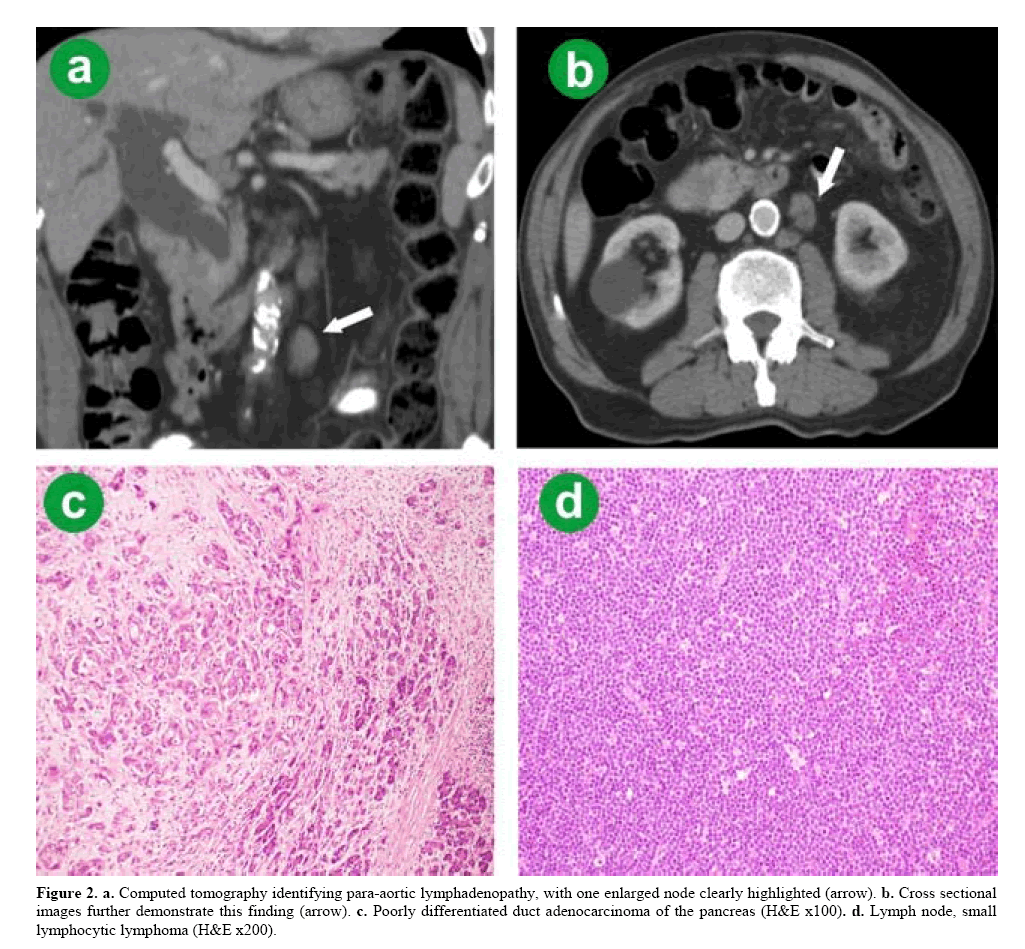 The word peri-pancreatic lymph node enlargement is used loosely without precise understanding of the specific pancreatic lymph nodes anatomy. It should be noted that the upper abdomen lymphatic channels generally follow the arterial supply and this holds true with the pancreas. Pancreatic head and uncinate process lymphatic drainage is complex. The more anterior rostral area drains along the gastroduodenal artery to the hepatoduodenal ligament as well as in the duodenopancreatic groove via the pancreaticoduodenal arcade. The lymphatics of the uncinate process and more inferior aspect of the pancreatic head drain via the inferior pancreaticoduodenal artery to the superior mesenteric nodal basin. They have numerous anastomoses and may drain into either the lymph nodes near the root of the celiac axis or superior mesenteric artery. Of importance, pancreatic cancer lymph node drainage usually terminates above the level of the left renal vein.

When one examines the patterns of lymph node spread in pancreatic cancer and lymphoma there are various differences. Costello et al. examined four patterns of distribution of lymph node enlargement in lymphoma and pancreatic cancer [4]. Four types of peri-pancreatic lymphadenopathy are described in for lymphoma. Type 1 is located in the pre-aortic retropancreatic region. Type 2 is pancreatiocosplenic lymphadenopathy. Type 3 is isolated celiac and/or portal lymphadenopathy. Type 4 includes diffuse, extensive lymphadenopathy. Data collected from staging laparotomies in those previously untreated lymphoma indicate that paraaortic lymph nodes involvement in lymphoma can be as high as 68% in non-Hodgkin’s lymphoma, 71% in mesenteric nodes, and 61% in splenic disease [5]. High quality CT has accuracy at detecting intra-abdominal disease in lymphoma in 90% of cases [6].

In terms of concurrent pancreatic cancer and lymphoma, we could not identify any reported case in literature. Whether many such patients are not offered surgery due to lymph node enlargement based on imaging reports is unknown. Although no concurrent lymphoma and pancreatic cancer metastasis within the same node has been previously reported, these have been noted with other tumours. A case of metachronous lymphoma and early gastric cancer within the same node has been reported [7]. There is also a report of involvement of same lymph node by lymphoma and metastatic adenocarcinoma from primary colon cancer [8].

In the two cases presented, enlarged lymph nodes were noted, which may have been considered incurable disease. Neither patient had instrumentation of the biliary tree as an explanation for lymph node enlargement or exhibited evidence of current or past biliary sepsis. One patient had enlarged aorto-caval lymph nodes located below the renal vein. The other had para-aortic lymphadenopathy, once again mainly below the level of the renal veins. The pattern of lymph node enlargement was more in keeping with lymphoma than metastatic pancreatic cancer, as was confirmed on final pathology.