Background Gastroenteropancreatic neuroendocrine tumors (GEP-NETs) are neoplasms commonly found within the gastrointestinal tract (GIT) that originate from endocrine cells. These are slow progressive tumors and often metastasize to other elements of the GIT including the liver. Consequently, these tumors release hormones including serotonin and/or histamine that are responsible for the symptoms including intermittent flushing and diarrhea. Metastasis of GEP-NETs, although rare, is possible and may extend to local lymph nodes and viscera. Case report Our patient was a 69-year-old female who initially presented with postprandial abdominal pain, nausea, vomiting, and later was diagnosed with GEP-NETs following surgical resection in 2014. Restaging after surgery showed regional lymph node involvement and hepatic metastasis. Of note she did not have a pre-operative computed tomography (CT) scan. She was started on octreotide, and later switched to lanreotide. In the interim, she did not have any positive findings on serial octreoscans depicting the skin lesion that was performed in the interim period every six months. However, she noticed a cutaneous mass in the upper right flank mass in 2016, which was followed up by a dermatologist. In 2017, the mass grew in size and hence biopsied which showed NET consistent with her primary tumor. Discussion GEP-NETs often metastasize to lymph nodes and liver but rarely can involve the skin and present as firm papules as found in our patient. Cutaneous metastasis of GEP-NETs often has high morbidity and mortality and is usually associated with a primary lesion in the bronchopulmonary system. However, as demonstrated in this case report, cutaneous metastasis can originate from the GIT, including the small intestine as well.

Gastroenteropancreatic neuroendocrine tumors (GEPNETs) are type of neoplasms that are especially rare, with an annual incidence estimated to be about 6.9/100,000 [1]. More than 50% of these GEP-NETs stem from the endocrine cells. Most NETs are very slow-growing of which its symptoms are mainly related to its mass effect [1]. Anywhere from 8 to 35% of patients with GEP-NETs develop a carcinoid syndrome, in which functional GEPNETs will metastasize to the liver or outside of the GI tract [2]. In addition, these tumors will release certain hormones including serotonin and/or histamine that act as vasoactive agents and unable to be metabolized by the liver. Carcinoid syndrome can be diagnosed by measuring a 24 hour 5-hydroxyindoleacetic acid (5-HIAA) level in the urine and chromogranin A levels (secreted peptide), which is a major product of serotonin metabolism and is often elevated in patients with this diagnosis [2]. Other signs and symptoms associated with the syndrome include periodic flushing, diarrhea, and less commonly wheezing, telangiectasia, and abdominal discomfort [2]. Since the symptoms associated with carcinoid syndrome are largely nonspecific and may be misinterpreted as other more common pathologies, there is often a delay in correctly diagnosing carcinoid syndrome with the time of the initial symptoms to the correct diagnosis ranging anywhere from 2 to 20 years [2].

In addition to the GEP-NETs, these tumors may arise in ovaries, lungs and thymus. These primary neoplasms can metastasize and often will extend to the regional lymph nodes or viscera. A rarer site of metastasis of GEP-NETs is the skin, with only limited case reports demonstrating this.

A sixty-nine-year-old Caucasian female initially presented with postprandial abdominal pain. Her past medical history was not significant for any comorbidity. She did not smoke and drank alcohol only socially. Originally, from South Africa, she immigrated in her early 20s to attend university and is now an art therapist with two sons. At the time, she underwent a complete GI workup including an esophagogastroduodenoscopy (EGD), colonoscopy, and small bowel follow-through which were all normal. She then started butalbital acetaminophen caffeine capsules, which resolved her pain. However, approximately three years later, she began to experience a recurrence of the postprandial abdominal pain with associated nausea, vomiting and a weight loss of about 27 pounds. She received a computed tomography (CT) scan, which was notable for a significantly dilated stomach and possible closed-loop obstruction with a mesenteric mass that was amorphous with some calcifications. On October 20, 2014, she underwent a laparotomy and was found to have a dilated bowel in the mid ileum and a notable obstruction that was due to a small nearby bowel tumor. A secondary lesion was also found approximately 20-25 cm distal to this. Bulky lymphadenopathy was noted and a small bowel resection of 25cm was performed. Tissue was sent to pathology which returned positive for well-differentiated GEP-NETs with 16/26 lymph node involvement. She proceeded to receive a CT scan and octreotide scan, which showed 3 foci of increased radiotracer activity in the hepatic segments consistent with metastatic GEPNETs. Magnetic resonance imaging (MRI) was notable for multiple enhancing hepatic lesions, consistent with hepatic metastases.

On December 19, 2014, she was started on SANDOSTATIN® LAR Depot (octreotide acetate for injectable suspension) 30mg intramuscularly every 28 days. Subsequently, she was treated with radiofrequency ablations to the 3 foci with a repeated percutaneous radiofrequency ablation of the liver on May 19, 2015. She was continued on octreotide acetate on the same dose and schedule. However, given the continued trend of up-trending biomarkers and the discovery of a new liver lesion, the octreotide acetate was increased to 40 mg. On August 31, 2015, she was switched to lanreotide 120 mg every 28 days. She then presented with an upper right flank mass, which was biopsied and was consistent with metastatic neuroendocrine carcinoma Grade 2/3 (Figure 1). She is currently only on hormonal treatment. A complete skin examination was carried out both by us as well as by a dermatologist and no further cutaneous lesions was found at present. 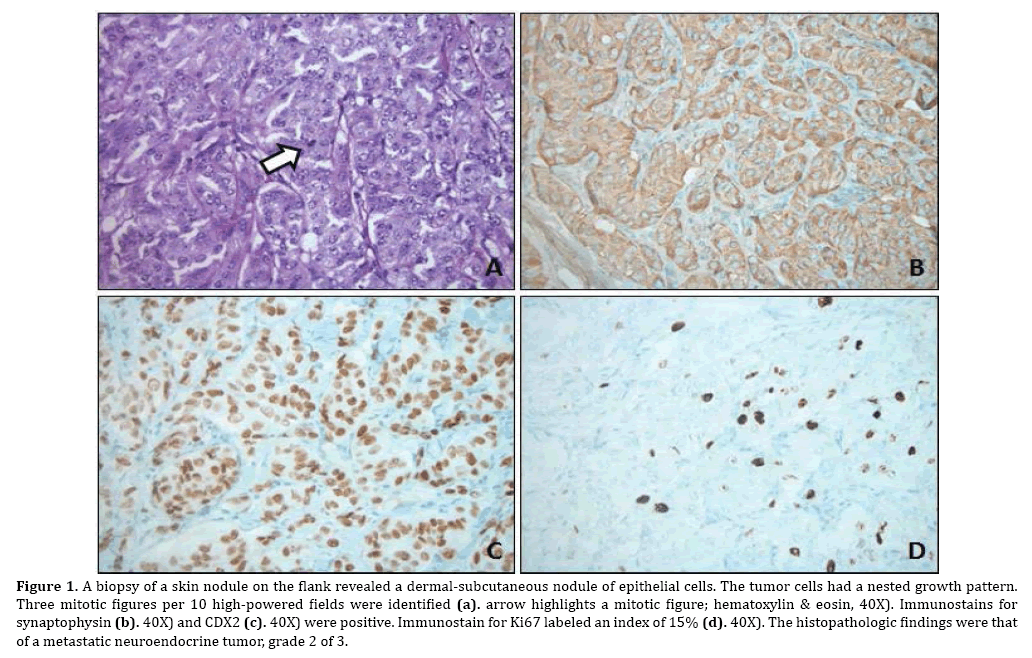 Figure 1. A biopsy of a skin nodule on the flank revealed a dermal-subcutaneous nodule of epithelial cells. The tumor cells had a nested growth pattern. Three mitotic figures per 10 high-powered fields were identified (a). arrow highlights a mitotic figure; hematoxylin & eosin, 40X). Immunostains for synaptophysin (b). 40X) and CDX2 (c). 40X) were positive. Immunostain for Ki67 labeled an index of 15% (d). 40X). The histopathologic findings were that of a metastatic neuroendocrine tumor, grade 2 of 3.

According to global data from 2010, the average prevalence of GEP-NETs is about 5.25 cases per 100,000, with the majority of cases of GEP-NETs origin [3]. The overall incidence of GEP-NETs in the United States has increased significantly from 1973 (1.09 per 100,000) to 2004 (5.25 per 100,000), specifically GEP-NETs in the small intestine and rectum [3]. Symptoms associated with GEP-NETs vary widely and is largely dependent on whether the tumor is functioning and releasing various vasoactive peptides or neuroamines, which is also responsible for its wide range in clinical presentation and often delay in diagnosis [3]. NETs often originate in either the GI tract, pancreas, or the lung and frequently metastasize to lymph nodes, bones and most commonly the liver [4].

A very rare site of metastases of GEP-NETs is the skin and review of literature suggests that the clinical manifestation of cutaneous metastasizes is usually firm papules of varying sizes and range from very painful and tender skin lesions to asymptomatic with only mild associated pruritus. Intermittent flushing has been strongly associated with cutaneous metastases, reporting in up to 75% of these patients, [5] as summarized in Table 1. Histologic findings of cutaneous carcinoid metastases expectedly appear similar to the primary lesion and will at times express fascicles of spindle cells, distinct areas of necrosis, with a low mitotic rate with only mild atypia [5].

The pathogenesis of pain associated with cutaneous metastases is still unclear but possible theories include: perineural invasion, release of vasoactive and peptide hormones including kallikrein and serotonin and local tissue and fibrosis. Treatment for metastatic disease typically focuses on symptomatic management including octreotide, interferon-a, meta-iodobenzylguanidine (MIBG) or a combination of these drugs [6]. However, no data on local treatment such as radiation or other modalities was found in the previous cases.

In general, skin metastases of GEP-NETs are a rare phenomenon with the majority of cases reporting primary sources to be the bronchopulmonary system. However, our case reports an incidence of primary GEP-NETs in the small intestine with cutaneous metastasis who is currently doing quite well on treatment.

Despite more frequent and advanced imaging and endoscopic evaluations, GEP-NETs are still a difficult diagnosis to make given the wide range of its clinical presentation. Less commonly, cutaneous metastasis can occur with NETs and is usually associated with high morbidity and mortality. It is important to keep in mind that cutaneous metastasis of GEPNETs can potentially originate from any source including the bronchopulmonary system and GI tract.

The project described was supported by the National Institutes of Health through grant numbers UL1 TR001064.

The author has no potential conflicts of interest except Dr. Saif is on speaker Bureau for both Novartis and Ipsen.