Context Pancreatic extra-gastrointestinal stromal tumors are extremely uncommon neoplasm. To the best of our knowledge, only eleven cases have been reported in the literature. All the case reports published mostly involve diagnoses made on surgical pathology. Case report A 40-year-old male patient presented with asthenia, mild abdominal pain, severe anemia and weight loss. Contrast-enhanced computed tomography of the abdomen revealed a heterogeneously enhancing mass (6.5x6.0 cm) in the body and head of the pancreas. Ultrasound-guided fine needle aspiration (US-FNA) was performed on the mass of the pancreas before a pancreaticoduodenectomy. A cytological diagnosis of pancreatic malignant mesenchymal neoplasm was made. The final diagnosis of primary pancreatic extra-gastrointestinal stromal tumor was confirmed by histopathological examination and immunohistochemical findings (CD117 positivity). This case was diagnosed by percutaneous transabdominal ultrasound, rather than endoscopic ultrasound-guided fine needle aspiration (EUS-FNA) which had been used in three previous cases. Conclusion We report a very unusual case of pancreatic extra-gastrointestinal stromal tumor which was diagnosed by US-FNA cytology. Although this is uncommon in the pancreas, extra-gastrointestinal stromal tumors should be considered in the differential diagnosis of solid and cystic pancreatic masses on cytology.

Gastrointestinal stromal tumors (GISTs) are mesenchymal tumors predominantly occurring in the stomach and small intestine. GISTs originate from the soft tissue of the abdomen and retroperitoneum but display no connection to the wall or the serosal surface of the viscera. They are considered to arise from various anatomic sites, such as the omentum, mesentery, retroperitoneum and gall bladder [1, 2]. Primary extra-gastrointestinal stromal tumors (EGISTs) arising in the pancreas are extremely rare, and only eleven cases have been reported in the literature, eight of which have been diagnosed by histopathology and three by cytology [3, 4, 5, 6, 7, 8, 9, 10, 11, 12, 13]. We report the fourth case of primary pancreatic extra-gastrointestinal stromal tumor with metastases to the liver, and present a review of literature.

A 40-year-old male patient presented with asthenia, mild abdominal pain, low grade fever and severe anemia. It was associated with loss of appetite and a 2 kg weight loss over three months. No lump was palpable in the epigastrium on abdominal examination. Routine laboratory investigations were within normal limits except for severe anemia (hemoglobin: 3.5 g/dL; reference range: 12-15 g/dL).

Ultrasonographic examination of the abdomen showed a solid mass in the head and the body of the pancreas. The mass did not invade or compress any vascular structures on CT or ultrasonography. A contrastenhanced computed tomography of the abdomen revealed a heterogeneously enhancing mass (mostly solid) in the body and head of the pancreas measuring 6.5x6.0 cm. The mass did not communicate with the main pancreatic duct. There was no evidence of ascites or lymphadenopathy. 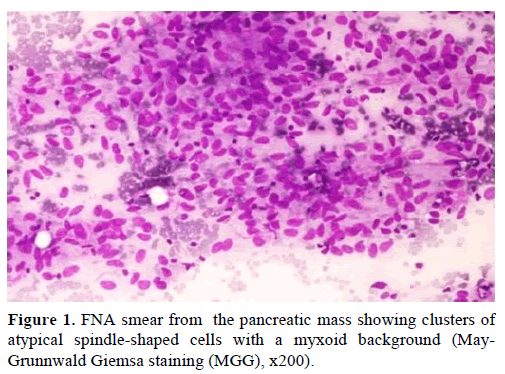 A pancreaticoduodenectomy specimen showed a large fleshy tumor mass (6.5x6.0 cm) in the head and body of the pancreas, replacing most of the parenchyma. The cut surface showed a variegated solid mass (Figure 2). Figure 2. Pancreaticoduodenectomy specimen showing a solid mass in the head and body of the pancreas measuring 6.5x6.0 cm with a variegated cut surface.

Sections from the pancreatic mass and the liver nodule showed sheets of spindle-shaped cells arranged in fascicles with a chronic inflammatory background (Figure 3). Brisk mitoses (more than 8-10/50 HPF) were also seen. On immunohistochemistry, the tumor cells were strongly positive for CD117 (Figure 4), CD34 and vimentin, and negative for SMA, desmin, S- 100 and cytokeratin. 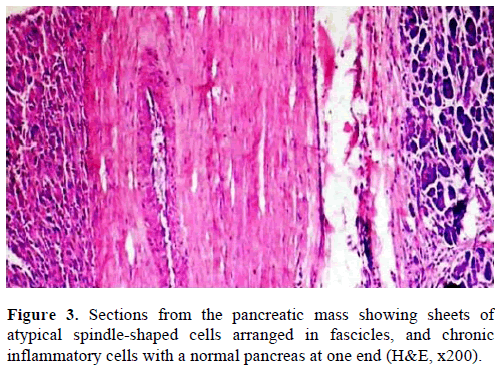 Figure 3. Sections from the pancreatic mass showing sheets of atypical spindle-shaped cells arranged in fascicles, and chronic inflammatory cells with a normal pancreas at one end (H&E, x200). 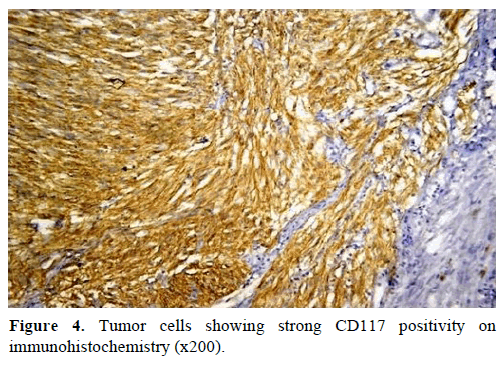 Pancreatic gastrointestinal stromal tumors are very rare neoplastic lesions. GISTs reported outside the gastrointestinal tract as apparent primary tumors are designated as extra-gastrointestinal stromal tumors (EGISTs). A primary localization in the pancreas has rarely been reported on cytology. The clinical symptoms include abdominal pain, early satiety, flatulence, ileus, bleeding, anemia, and weight loss. It can be diagnosed incidentally by radiologic imaging [14]. They are usually asymptomatic depending on the location, size of the tumor and the lack of mucosal involvement [7]. GISTs originate from the interstitial cells of Cajal, which are the pacemaker cells of the gastrointestinal tract. These cells express c-kit proteins (CD117), CD34, and vimentin [4]. On immunohistochemistry, eight of the previous eleven reported cases demonstrated intense immunoreactivity for CD117 and CD34 [3, 7, 8, 9, 10, 11, 12, 13] whereas three cases showed negative staining for CD117 [4, 5, 6].

Most pancreatic masses are adenocarcinomas; however, clinicians should be aware of other possibilities which have different (and usually better) treatment and prognoses. The cytologic differential diagnosis for these spindle cell proliferations includes leiomyoma, schwannoma, fibromatosis, inflammatory fibroid polyps, and gastrointestinal muscularis sampling [8]. Immunohistochemistry demonstrating CD117 positivity confirms the diagnosis of GISTs. In the literature, cases of fibromatosis have been reported to react with antibodies directed against CD117, although this does not typically involve the pancreas [14]. GISTs primarily occur within the luminal gastrointestinal tract, but practitioners should be aware that they can arise from outside the gastrointestinal tract. E-GISTs are rare and are found in the omentum, mesentery, retroperitoneum or other intra-abdominal sites [15]. The first case of pancreatic E-GISTs diagnosed by endoscopic ultrasound-guided (EUSFNA) was in a 47-year-old male having self-limited episodes of nausea and bilious vomiting with no other significant gastrointestinal symptoms or constitutional features [8].

Harindhanavudhi et al. [9] diagnosed the second case of a pancreatic E-GIST by means of EUS-FNA. The patient refused surgery but cyst drainage and a cystojejunostomy were carried out. They presented with severe anemia due to cyst formation and hemorrhage within the E-GIST.

Saif et al. [10] reported the third case of a pancreatic EGIST by EUS-FNA and te patient developed liver metastasis within 6 months with an aggressive outcome.

We herein report the fourth case of a high risk pancreatic E-GIST which was diagosed by US-FNA. The smears showed clusters of atypical spindle-shaped cells displaying moderately pleomorphic hyperchromatic elongated nuclei and variable amounts of cytoplasm with a myxoid background. A cytological diagnosis of malignant mesenchymal neoplasm of the pancreas was reached and it was confirmed by histopathology and immunohistochemistry with a strong positivity of CD117, consistent with pancreatic E-GIST. Our patient developed liver metastasis within 24 months and also presented with severe anemia without cyst formations which indicates severe anemia may also be associated with solid-cystic pancreatic EGISTs.

The comparison of clinicopathological features and treatment outcomes of previously described pancreatic E-GISTs by EUS-FNA, including the present case, are shown in Table 1. 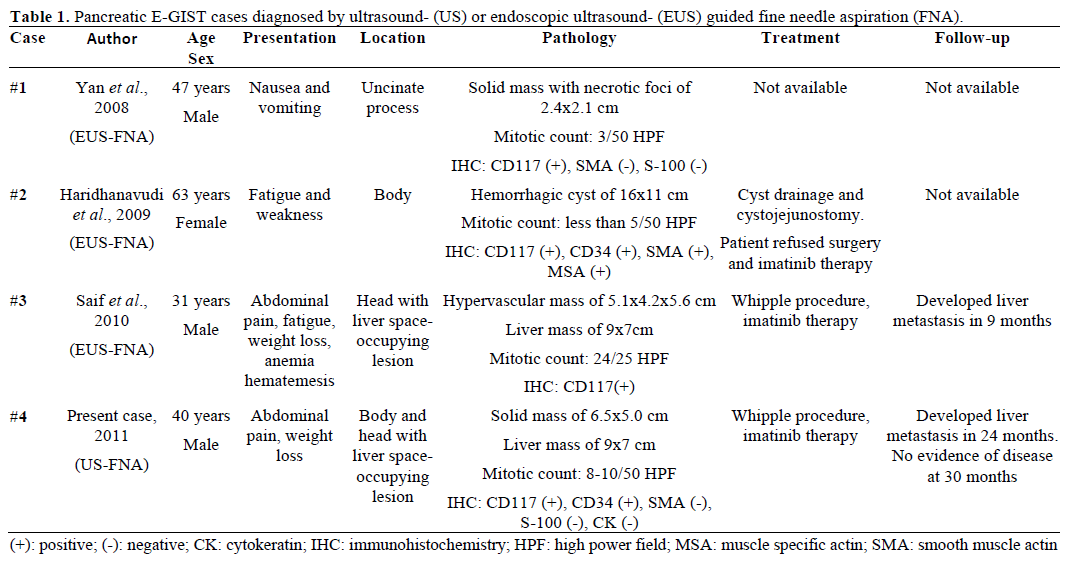 There was a distinct female predominance, age ranging from 38 to 72 years including all surgical pathological cases (mean age 55 years). The majority occurred in the body and tail of the pancreas with an average size of 12 cm. Seven of the eleven cases had symptoms of abdominal pain with or without fatigue and weight loss. The mitotic rate in most of these tumors was low on histopathology except in three cases (more than 120/50 HPF [3], 24/25 HPF [10] and more than 6-8/50 HPF [12]). One patient had a history of rapid recurrence of the disease with peritoneal and nodal metastasis following surgery and imatinib therapy [3]. In our case report, the mitotic figures were 8-10/50 HPF. The patient is on regular 6-month follow- ups. Computed tomography was carried out and showed liver metastasis within 24 months of surgical resection. The patient is well and on imatinib therapy (400 mg bid) after a partial hepatectomy.