Department of Gastroenterology and Department of Radiology and Medical Imaging, University of Medicine and Pharmacy Craiova. Craiova, Dolj, România

Context Pancreatic pseudoaneurysm rupture is a rare complication of chronic pancreatitis, with severe prognosis and high mortality. Angiography is usually required for confirmation of the diagnosis, but transabdominal ultrasound and CT angiography are useful noninvasive diagnostic methods. Case report We present the case of a 66- year-old patient with a large pancreatic pseudoaneurysm of the superior mesenteric artery complicated with obstructive jaundice. Transabdominal ultrasound with color and power Doppler showed a large pancreatic head pseudoaneurysm that communicated directly to the superior mesenteric artery. Presence of a spinning blood flow inside the pseudoaneurysm was visualized by color Doppler, with evidence of bidirectional flow in the pseudoaneurysm neck that was showed by Doppler spectral analysis. The contrastenhanced helical computer tomography with multiplanar sagittal and the 3D reconstruction of coronal images confirmed the communication of the pseudoaneurysm with he superior mesenteric artery. The patient was scheduled for selective angiography and embolization. However, clinical evolution was rapidly deteriorating, with collapse, hemorrhagic shock and massive hemorrhage. The patient was operated on and subsequently died despite three days of intensive care, due to disseminated intravascular coagulation and multiorgan failure. Conclusion Non invasive imaging methods consisting of transabdominal ultrasound with color Doppler and contrast-enhanced computer tomography with sagittal reconstruction of coronal images were veryuseful in the  establishment of the diagnosis of pancreatic pseudoaneurysm of the superior mesenteric artery complicated with cholestatic jaundice. However, these imaging methods do not obviate the need for diagnostic and therapeutic angiography, eventually followed by surgical intervention in cases of recurrent bleeding or hemodynamic unstable patients.

Pancreatic pseudoaneurysm is a rare complication of chronic pancreatitis, with an uncertain evolution and severe prognosis [1]. The rupture of the pseudoaneurysm has a high mortality rate variable from 12.5% in treated patients to more than 90% in untreated patients. Although, it is a rare complication occurring in less than 10% of cases, it should be considered in the patients with chronic pancreatitis, with recurrent pain and upper gastrointestinal bleeding [1, 2]. Angiography is usually required for confirmation of the diagnosis, but transabdominal ultrasound and CT angiography are useful noninvasive diagnostic methods [3, 4].

A 66-year-old male presented in the Emergency Department for upper abdominal pain, which appeared in the past two months, precipitated by fat and alcohol consumption. The pain became gradually more severe and then permanent, and did not decrease after usual analgesic treatment. Subsequently, progressive jaundice slowly appeared, and intensified in the last two weeks. Two days before admission he presented an episode of melena, with a negative naso-gastric aspirate. The patient used to smoke (1 pack of cigarettes per day) and to consume alcohol (at least 50 g daily).

Clinical examination showed a pale and jaundiced, cachectic patient, with normal heart sounds (80 bpm) and blood pressure (110/70 mmHg). The patient complained of pain in the upper epigastric region, enhanced by palpation. A mass was palpated in the epigastric region, with audible noise over it. The liver margin was tender, round, 5 cm below the costal rib, with a smooth liver surface. Spleen was not felt. A rectal examination disclosed melena.

Transabdominal ultrasound showed a homogenous, enlarged liver, with dilated intrahepatic bile ducts (Figure 1), a distended gallbladder with sludge and a 6 mm stone, a large common bile duct of 9 mm with distal obstruction at the level of the intrapancreatic terminal bile duct. The portal system was normal, as well as the spleen (10 cm in the longest diameter). The pancreas was enlarged, inhomogeneous, with diffuse calcifications, a dilated Wirsung at the level of body of the pancreas, and a pseudocystic structure of 7 cm at the level of the pancreatic head with a distinct wall (Figure 2 and Videoclip 1 [www.joplink.net/prev/200501/02_v1.avi]). 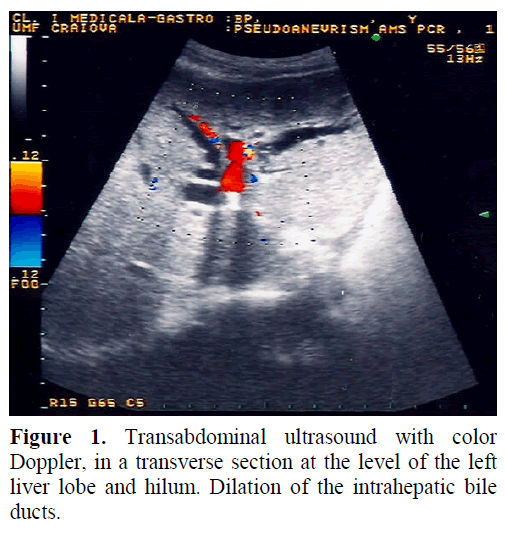 Figure 1. Transabdominal ultrasound with color Doppler, in a transverse section at the level of the left liver lobe and hilum. Dilation of the intrahepatic bile ducts. 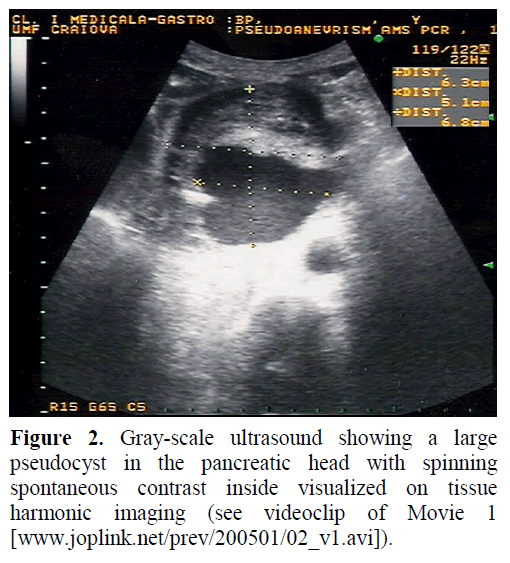 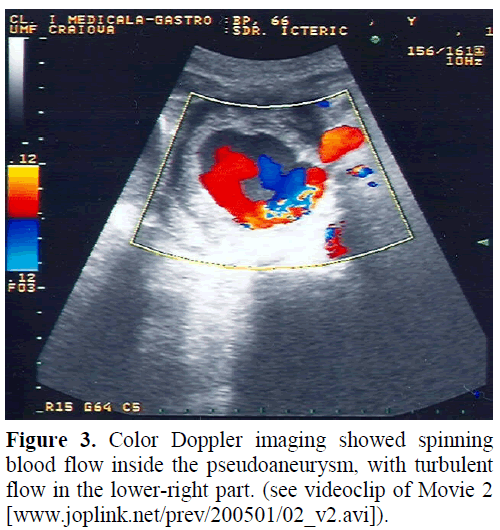 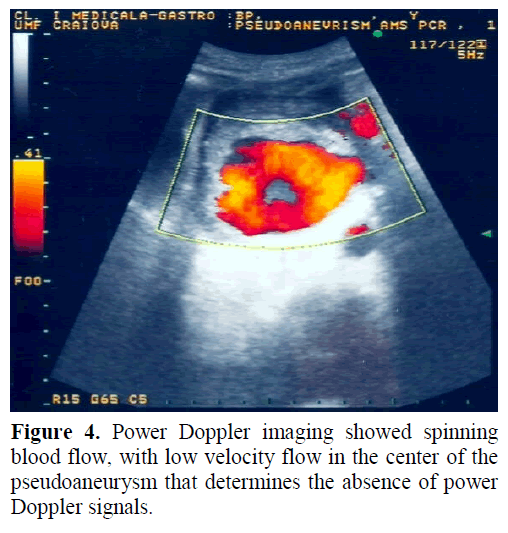 Figure 4. Power Doppler imaging showed spinning blood flow, with low velocity flow in the center of the pseudoaneurysm that determines the absence of power Doppler signals. Helical computer tomography showed the enlarged liver with dilated intrahepatic bile ducts and a distended gallbladder with a 6 mm stone inside. The pancreas was enlarged, with diffuse calcifications and a dilated Wirsung. A round-oval hypodense structure of 7 cm was identified at the level of the pancreatic head with a central zone which enhanced homogeneously with contrast substance during the arterial phase (Figure 7). Sagittal midline reconstruction of the coronal images indicated a clear communication with the superior mesenteric artery, visible on contrast enhanced images (Figure 8). 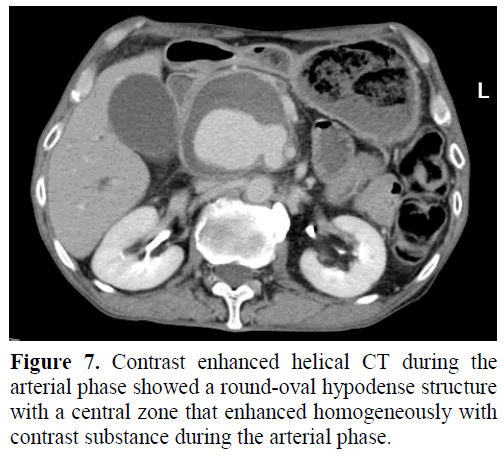 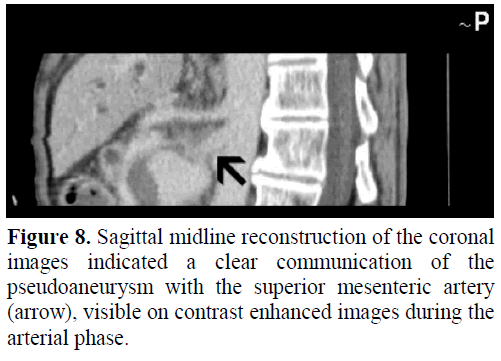 Figure 8. Sagittal midline reconstruction of the coronal images indicated a clear communication of the pseudoaneurysm with the superior mesenteric artery (arrow), visible on contrast enhanced images during the arterial phase.

The patient was scheduled for a selective angiography and embolization. However, clinical evolution was rapidly deteriorating, with collapse, hemorrhagic shock and massive hemorrhage. The patient was operated on and subsequently died despite three days of intensive care, due to disseminated intravascular coagulation and multiorgan failure.

Vascular complications of chronic pancreatitis are well-known, but the real prevalence is not well established, most of the authors reporting figures of less than 10% [1]. However, the evolution of these complications is very unpredictable and the prognosis is severe [1, 2]. The mortality rate varies from 12.5% in treated patients to more than 90% in untreated patients.

The transformation of a pseudocyst into a vascular structure (a pancreatic pseudoaneurysm) is explained by two mechanisms: the autodigestion of the vascular system due to the action of the pancreatic enzymes or a large pseudocyst that erodes a visceral artery [1]. The most common arteries involved described in the literature are the splenic artery in 30-50% of the cases [5], the gastro-duodenal artery in 10-15% of the cases [6], the pancreatico-duodenal artery in 10% of the cases [7], as well as other arteries like the superior mesenteric artery [8], the hepatic artery [9], the celiac trunk [10], the left gastric artery [11], etc.

Although selective angiography seems to be the diagnostic and therapeutic procedure of choice for the confirmation of the origin of the pancreatic pseudoaneurysm and for the closure of the superior mesenteric artery aneurysm by placing a stent, this was not possible in our patient due to the rapid deterioration of clinical status (with hemodynamic instability and hemorrhagic shock). Furthermore, emergency surgical intervention had an unfavorable outcome with ensuing death after three days of intensive care treatment.

The present case emphasizes the current management of the pancreatic pseudoaneurysms which consists of therapeutic angiography as method of first choice, followed by surgical treatment in cases of failure or hemodynamic unstable patients. Non-invasive imaging methods like

transabdominal ultrasound with color Doppler and contrast-enhanced helical CT with sagittal multiplanar reconstruction of coronal images are very useful in the establishment of the diagnosis in critically ill patients, before selective angiography or surgical intervention.

The English language of this manuscript was revised by Mrs. Oana- Iuliana ?tef?nescu-Ilinca (Assistant Lecturer, Department of English Language, University of Medicine and Pharmacy Craiova, Romania)