Chronic pancreatitis (CP) is a condition characterized by progressive chronic inflammation of the pancreas and its clinical manifestations may vary from patient to patient. Abdominal pain is the most common and significant symptom in CP and is seen in up to 90% of patients. The mechanism of pain in chronic pancreatitis is not fully understood but is probably multifactorial [1]. Recurrent acute inflammation can develop in a chronically diseased pancreas, and this can cause severe pain in patients with CP [2]. The activated enzymes and other injurious substances released during the acute inflammatory process might be responsible for the initiation of pain. Also, there is a possibility that this acute inflammation may be occurring continuously in a chronically inflamed gland until the fibrosis process sets in. The process may be happening irrespective of the clinical manifestation of acute pancreatitis. The actual incidence and prevalence of ongoing acute inflammation in CP have been under-noticed in the literature. [2]

Specimen from the pancreas is required to better understand the incidence and pattern of inflammation in chronic pancreatitis. The pancreas is not a safe organ for percutaneous tissue biopsy given its location deep in the abdomen. Adequate tissue for histological examination can be obtained only in patients who undergo surgical procedures. The pathological study of the cored out tissue obtained for biopsy from the pancreas in Frey’s procedure can be studied but there is a chance that the tissue tends to get distorted and charred owing to handling and usage of electrocautery in the pancreas. Intra-operative fine needle aspiration cytology (FNAC) of the pancreas is commonly used to determine if a lesion is malignant and to determine the type of malignancy. Studies have shown the sensitivity, specificity, positive and negative predictive values, and diagnostic accuracy for intraoperative FNAC comparable to that of biopsy [3, 4, 5]. FNAC has the advantage of studying the cells from a well perfused and unhandled pancreas, but also has the disadvantage of low yield in case of a firm to hard gland with more fibrosis and less cellularity. In this observational study, we attempt to examine the prevalence of acute pancreatic inflammation in patients with CP undergoing surgery using both intraoperative FNAC and histopathological examination of the operative specimen from the pancreas.

Our study was a prospective observational study performed in 50 consecutive patients who underwent surgery for CP from October 2013 in the Department of Surgical Gastroenterology, Jawaharlal Institute of Postgraduate Medical Education and Research (JIPMER). Ethical clearance was obtained from the Institute ethics committee. A pancreatic protocol contrast enhanced computed tomography (CECT) of abdomen was done in all patients to confirm the diagnoses, assess the characteristics of pancreas and to rule out CP related complications. All proven cases of CP with pain not controlled on medications were included in the study. Those patients with associated pancreatic malignancy or clinical acute on chronic pancreatitis with acute fluid collection on imaging were excluded. Demographic data were collected from all patients at the time of admission, including age, sex, body mass index, history of alcoholism, habit of smoking, clinical presentation, detailed history of abdominal pain, associated diabetes mellitus or steatorrhoea. All patients underwent hemogram, renal and liver function tests. Serum amylase levels were assessed the day prior to surgery. Frey’s procedure was the surgery of choice in all patients except those with associated portal hypertension where lateral pancreatico jejunostomy (LPJ) was the procedure performed. Distal pancreatectomy and hepaticojejunostomy were added in patients with tail predominant disease and concurrent biliary stricture respectively. Izbicki procedure was the preferred procedure in patients with small duct disease (duct diameter<4 mm). Intra operative FNAC was taken using a 21-gauge needle from the head and body of the pancreas after adequate exposure of the pancreas. Detailed intra operative assessment of the pancreas including pancreatic texture, volume, calcifications, main pancreatic duct (MPD) diameter and evidence of associated features like portal hypertension, biliary stricture, pseudoaneurysm, pancreatic head mass and pseudocysts were made and findings recorded. Cored out tissues from the pancreatic head were sent for histopathological examination. Patients with evidence of malignancy on histopathology were excluded from the study. FNAC smears were stained with Papanicolaou (PAP) and May Grunwald Giemsa (MGG) stains. All the FNAC slides were examined by a single pathologist with 26 years of experience. Aspirates showing evidence of neutrophilic infiltrates were taken as features suggesting acute inflammation on chronic pancreatitis. Histopathological slides were also reviewed by the same pathologist to look for features of acute inflammation (Figures 1, 2 and 3). 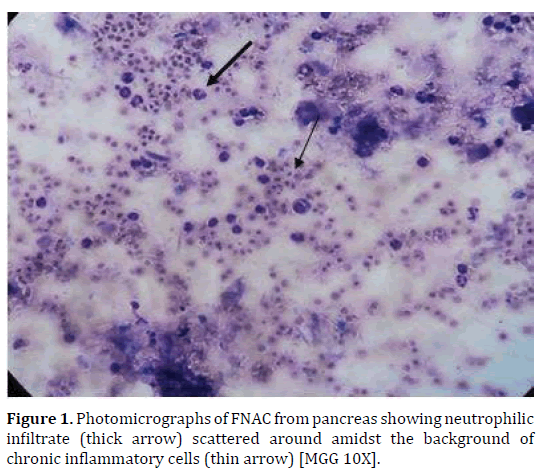 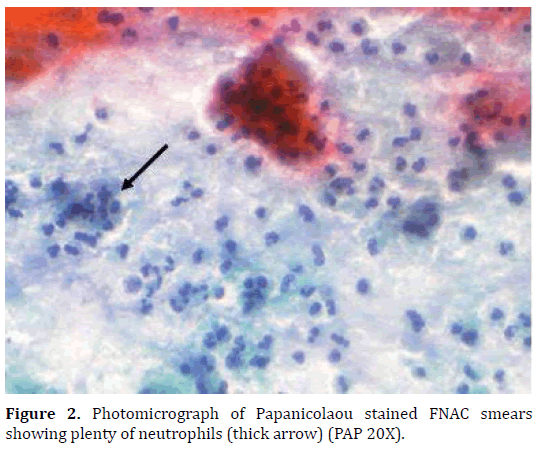 The data was entered and analyzed in Statistical Package for the Social Sciences (SPSS) version 16. FNAC and histopathological findings were summarized as proportions.

CP is an ongoing chronic inflammatory process of the pancreas leading to the destruction of parenchyma and ducts with development of fibrosis [6]. The pathological hallmarks of chronic pancreatitis are diffuse or focal parenchymal destruction with damage to the acini and islet cells, chronic inflammatory cell infiltration, loss of normal architecture and progressive fibrosis [7]. Multiple studies in the last four decades have observed that recurrent acute pancreatitis leads to CP [8, 9, 10].

Sarles et al. [11] in their study in 1965 in a set of patients with acute and chronic pancreatitis observed that acute and chronic pancreatitis are two different entities pathologically and acute form rarely progressed to CP. They showed that though both AP and CP can be caused by alcoholism, CP patients tend to be younger than their AP counterparts. Also, they did a careful histological study of the wall of the pseudocyst in CP and showed that the cysts arose not following an acute necrosis of the pancreas but by distension and a blowing out of foci of localized acinocanalicular dilatation secondary to ductal obstruction. From then onwards multiple studies are debating the pathophysiology of CP and whether recurrent acute inflammation leads to chronic pancreatitis or not.

Ammann and Kloppel in their prospective long-term clinico-morphological study on alcoholic CP correlated the clinical findings to the biopsy of the pancreas at early and advanced CP and showed that there is an evolutionary change from AP to CP with necrosis pre-dominating the acute events while fibrosis sets in finally [12]. Their study showed that morphological features of AP like necrosis and necrotic pseudocysts dominate in early stages while fibrosis paralleled by increasing impairment of pancreatic function was the characteristic findings in the late stages. Morphological findings in early and late ACP suggest that repeated and severe attacks of acute pancreatitis lead to the progression of the disease to CP supporting the necrosis-fibrosis hypothesis. Another study by Kloppel et al [2] on morphology of pseudocysts in CP showed that if peripancreatic fat necrosis become confluent and extensive, as seen in severe acute pancreatitis, pseudocysts will form, while organization of the smaller foci of intrapancreatic fat necrosis that occurs along the interlobular spaces of the pancreas occasionally only leads to pseudocysts but most likely induces fibrosis. A histological study by de Angelis et al. [13] on alcoholic and non-alcoholic CP has shown that inflammatory cells predominantly lymphocytes and macrophages were concentrated at the periphery of a damaged perineurium suggesting a role for inflammatory cells in damaging the perineurium and generating pain. In an autopsy study which attempts to point out classical features of CP to avoid overdiagnosis of CP in the biopsy, Shimizu et al. [14] have shown that a feature of acute inflammation like neutrophil and polymorphonuclear cell infiltrates in the periductal region exists in CP and they may suggest recently exacerbated CP. It has been noted in many autopsy series, and operative biopsy studies of CP that a polymorphonuclear cell infiltrate exists in many cases of CP, and it is attributed to recent acute crises in CP [2, 8, 9, 13, 15]. Exact prevalence of acute inflammation in CP glands has not been studied in detail. Moreover, whenever features of acute inflammation were detected in biopsies of tissues from chronic pancreatitis, they have been attributed to a recent acute episode occurring in CP. Our study aimed to study the prevalence of acute inflammation in CP patients who neither had a recent acute pain episode nor elevated serum amylase levels. We were able to detect features of acute inflammation (in either FNAC or biopsy) in around 60% of our patients. This is significantly high compared to the incidence reported in previous operative biopsy studies [2, 8, 13]. Our study supports the finding noted by Ammann and Kloppel [12] that a pathological acute inflammation occurs continuously in a chronically inflamed gland until the fibrosis process sets in. Our study also shows that this acute inflammatory process may be happening irrespective of the external manifestation of an acute episode in a patient, a finding that has not been reported in literature. Twenty percent of our FNACs came as non-diagnostic possibly because of the difficulty in retrieving the cells using a fine needle from the firm to hard pancreas which is mostly constituted by thick fibrotic tissue and less cellularity. Also, the biopsy specimen from the pancreas showed lesser proportion of acute inflammatory features compared to the FNAC samples. Frey’s procedure is done by bit by bit coring of the pancreatic tissue using high energy electrocoagulation which usually results in charring of the pancreatic tissue. We feel that this might have affected the interpretation of acute inflammation in biopsy specimens.