Objective Postoperative bleeding is a severe complication that can occur after pancreatectomy. Bleeding mainly arises from peripancreatic arteries, but the portal venous system can also rarely cause bleeding. This study assessed portal vein bleeding after pancreatectomy. Methods Between November 2013 and August 2016, five patients (three males, two females; median age, 75 years; age range, 66-78 years) with postoperative portal vein bleeding underwent stent graft repair. Angiography and fistulography were performed in four and five patients, respectively. Patients were retrospectively analyzed with regard to radiological findings and clinical outcome. Results All patients developed pancreatic leakage after surgery. Angiography demonstrated portal vein pseudoaneurysm in one patient and no evidence of bleeding in the other three patients. Fistulography demonstrated the peritoneal cavity with pancreatic leakage connecting with the portal venous system in all five patients. Stent grafts achieved hemostasis with portal flow preservation in all patients. Four patients were discharged and one patient died of multiorgan failure in hospital. Conclusions Fistulography is useful to depict sources of portal vein bleeding. Stent grafts appear to offer effective treatment for portal vein bleeding after pancreatectomy.

Despite declining mortality rates after pancreatic surgery, postoperative bleeding remains one of the most serious complications, particularly in high-volume centers [1, 2, 3]. Bleeding occurs in 1-8% of cases, but accounts for 11-38% of mortality [4, 5, 6]. The peripancreatic vascular structures that may be sources of bleeding are mainly the stump of the gastroduodenal artery, hepatic artery, splenic artery, or a branch of the superior mesenteric artery [1, 3, 4, 5, 6]. Although quite a rare occurrence, the portal venous system can also be a source of postoperative bleeding. The frequency of portal vein bleeding after pancreatectomy is reportedly <1% (0.1-0.7%) [7, 8, 9]. Like arterial bleeding, portal vein bleeding also can cause morbidity [7].

Our institutional review board approved the retrospective collection of data and data analysis for this study, and the requirement for informed consent from the patients was waived. Between November 2013 and August 2016, five consecutive patients (three males, two females; median age, 75 years; age range, 66-78 years) with portal vein bleeding after pancreatic surgery underwent placement of a stent graft at the portal vein. The primary tumor was bile duct carcinoma in two patients, and gall bladder carcinoma, ampullary carcinoma, and metastatic pancreatic tumor from renal cell carcinoma in one patient each.

Placement of a stent graft was performed as follows. In the first patient, definitive surgical repair for portal vein bleeding was attempted at the start. However, surgical repair was difficult because of severe postoperative intraabdominal adhesions. The therapeutic strategy was thus changed intraoperatively to stent graft deployment. The portal venous system was accessed by an ultrasoundguided transhepatic approach. An 18-gauge Cliny ultrasound puncture needle (Create Medic, Yokohama, Japan) was placed into a peripheral portal vein branch of the left lateral segment of the liver. The Seldinger technique was used to place a 5-Fr sheath into the main portal vein. Direct portography was then performed using a 4-Fr catheter. The diameter and length of the portal vein and the superior mesenteric vein were measured. The 5-Fr sheath was exchanged for a 12-Fr sheath over a guidewire. Then, a stent graft was deployed from the superior mesenteric vein to the main portal vein. Post-dilatation was performed with a balloon catheter. At the end of the procedure, the punctured hepatic tract was closed with 0.035-inch coils.

In the remaining four patients, stent graft repair was planned from the start. The portal venous system was accessed by a transileocolic approach. The ileocolic vein was punctured with an 18-gauge needle under laparotomy. And, a 12-Fr sheath (n=2), 14-Fr sheath (n=1), or 10-Fr sheath (n=1) was inserted to the superior mesenteric vein over a guidewire. Direct portography was then performed using a 4-Fr catheter, and the diameter and length of the portal vein and superior mesenteric vein were measured. A stent graft was then deployed. Postdilatation was performed with a balloon catheter.

The stent graft was selected based on the diameters of the portal vein and superior mesenteric vein. A Gore Excluder contralateral leg endoprosthesis (W. L. Gore & Associates, Flagstaff, AZ) was used in four patients, and a Fluency stent graft (Bard, Tempe, AZ) was used in one patient. 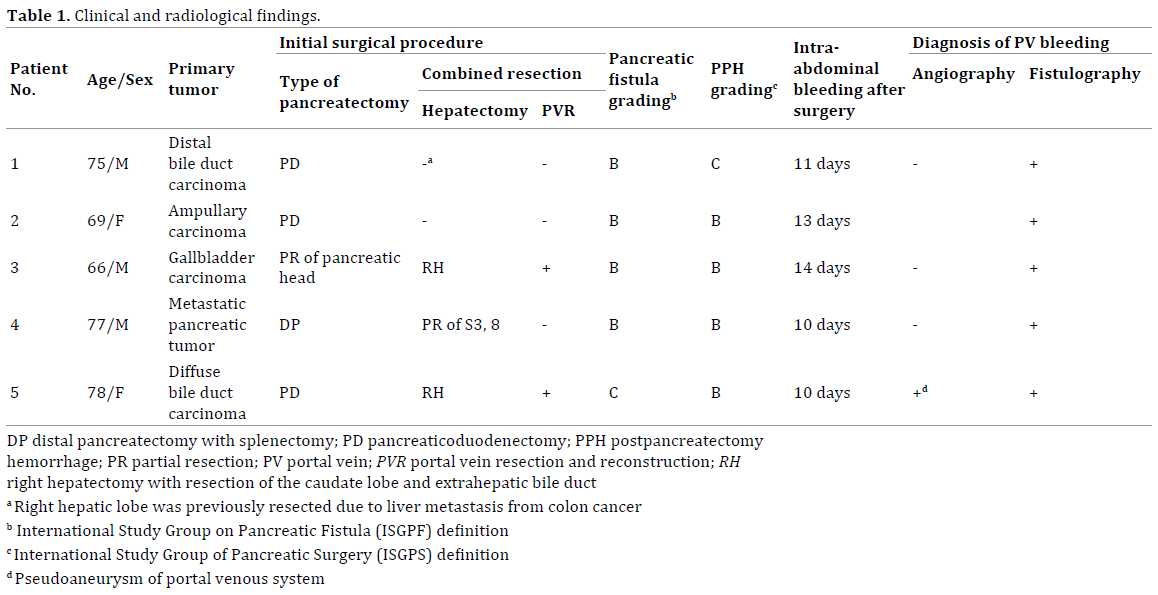 Intra-abdominal bleeding through the intraoperatively placed drains was identified 10-14 days (median, 11 days) after initial surgery. All patients were managed by transfusion of red blood cell and/or intravenous fluids. According to the International Study Group of Pancreatic Surgery grading [13], four patients suffered grade B bleeding and one patient suffered grade C bleeding.

Emergency angiography was performed as the initial management tool for intra-abdominal bleeding in four patients. Selective angiography of the celiac, common hepatic, and superior mesenteric artery demonstrated no evidence of arterial bleeding. Venous-phase selective angiography was also acquired as indirect portography. Indirect portography demonstrated no evidence of venous leakage. However, one patient showed pseudoaneurysm at the splenic vein near the confluence with the superior mesenteric vein (Figure 1a, b).

Following angiography to reposition and/or exchange the peripancreatic drain, traction was placed on the drains and contrast medium was injected via the drains in four patients. In three of these four patients, this contrast study showed communication between the peritoneal cavity and portal venous system, indicating portal vein bleeding (Figure 2a, b). In the other patient, no bleeding site was identified at that time and tentative bleeding repeated during follow-up. At 15 days after first bleeding, fistulography showed the portal vein and re-bleeding was present. In the remaining patient without angiography, bleeding occurred during fistulography, and the portal vein was demonstrated on fistulography. Finally, portal vein bleeding was diagnosed by fistulography in all patients. After fistulography, no patients developed severe infections such as bacteremia.

The results of stent graft repair are summarized in Table 2. The interval between primary surgery and stent graft deployment was 10-25 days (median, 13 days). In all patients, stent grafts were successfully deployed to cover the site of portal venous injury. And, final portography after stent graft deployment showed good portal flow (Figure 1c, 2c). Thus, clinical efficacy was achieved in all five patients.

Clinical courses after stent graft placement are summarized in Table 3. The follow-up period was 2-23 months (median, 9 months). After the procedure, the patients remained free of further portal vein bleeding. Thus, clinical efficacy was achieved in all five patients. Four patients were discharge in good health, but the remaining patient died of multiorgan failure two months after placement of a stent graft.

Although the exact mechanisms underlying postpancreatectomy bleeding remain elusive, pancreatic leakage and localized infection are thought to represent major contributors [5, 14]. The effects of localized infection and pancreatic juices likely weaken and erode the blood vessel walls. Mechanical irritation by the drain is another cause of bleeding [15]. In our series, pancreatic leakage occurred in all patients, and the drain was in contact with the bleeding site in four of the five patients. Previous articles of portal vein bleeding have also reported bleeding sites in proximity to the drain [16, 17].

Indirect portography following selective arteriography could not detect a bleeding source in three of the four patients. Previous article has also reported postulated causes of false-negative angiography, including pauses in intermittent bleeding or a venous origin of bleeding, which is difficult to identify after arteriography [2]. In one patient, indirect portography could demonstrate pseudoaneurysm at the splenic vein. Burke et al. [17] reported a similar case in which portal vein pseudoaneurysm was diagnosed by indirect portography. When arteriography fails to identify a bleeding source, consideration of the possibility of bleeding from the portal venous system is also important.

Choice of treatment for portal vein bleeding after pancreatectomy may depend on the clinical presentation. Reported approaches to treatment include surgical repair [9, 17], stent grafting [16], and temporary balloon occlusion and conservation [8]. In our first patient, we abandoned definitive surgical repair because of severe intra-abdominal adhesions. The treatment strategy was therefore changed to stent graft repair intraoperatively. Our experience with this patient led us to select stent grafts as the first-line treatment in the next four patients.

The present study showed limitations related to the retrospective design and small cohort size. This is because portal vein bleeding after pancreatectomy is quite a rare complication compared with arterial bleeding. Accumulation of further cases is thus necessary to assess the clinical features and efficacy of stent graft repair.