Pancreatic cancer constitutes a small percentage of all cancers, but it is the fourth leading cause of cancer-related deaths with a five year relative survival of 8% [1,2]. With increasing incidence and mortality rates in recent years, pancreatic cancer is expected to be the second leading cause of cancer related deaths by 2030 [3]. The vast majority of pancreatic cancers are adenocarcinomas arising from exocrine glands of the pancreas [4]. Surgery remains the only therapy with curative intent. The silent nature of pancreatic cancer hinders its early-stage diagnosis despite technological advances and modern equipment. Only 20% of patients present with potentially resectable disease [5].

Even after curative resection and adjuvant chemoradiotherapy, most patients will have recurrence, and the five-year survival remains at 25% [1]. Since pancreatic cancer cells metastasize early in disease development, 85% of patients eventually experience recurrence after curative resection [6]. Therefore, investigating clinicopathological factors as prognostic indicators are essential to help clinicians develop appropriate treatment strategies tailored for each patient.

The tumor marker Carbohydrate Antigen (CA) 19-9 has become the “gold standard” for diagnosing and monitoring treatment in pancreatic cancer patients over the past several decades. However, it remains insufficient for screening patients with pancreatic cancer [7]. Α recent study revealed that CA 19-9 combined with another tumor marker Carcinoembryonic Antigen (CEA), could be used as prognostic predictors in these patients [8]. The lymph node ratio and the total number of positive lymph nodes were also evaluated as potential prognostic factors [9]. Furthermore, the importance of inflammation-based scores has been recently emphasized in various cancers as well as in pancreatic cancer [10-14].

The aim of this study was to evaluate potential prognostic factors and to examine the relationship between pancreatic fistula and both overall survival and local recurrence in 226 patients with resectable pancreatic cancer, who were treated in the Agios Dimitrios General Hospital department during an 11-year interval.

After surgery, follow-up information was updated by hospital visits, written correspondence, and telephone interviews. The patients were followed periodically until death, loss of contact, or the end of the study, which was May 2018. OS time, was defined as the time period from the date of surgery to the date of last follow-up or death. Recurrence status and site, including local recurrence, liver metastases, para-aortic lymph nodes metastases, lung metastases, and peritoneal carcinomatosis, were examined to analyze the DFS. For each patient, the following information was collected: demographic data including age, sex, lifestyle factors including smoking, and alcohol consumption, presence of diabetes mellitus, abdominal pain, comorbidity index according to the American Society of Anesthesiologists (ASA) risk classification system, tumor staging based on the Union Internationale Contre le Cancer classification, tumor characteristics, including location, histological type, and differentiation, resection margin status, and infiltration of the lymph nodes, perineural, and vascular structures, postoperative complications, pancreatic fistula development and early postoperative mortality.

Clinical characteristics were analyzed using Pearson’s chi-square or Fisher’s exact test for categorical and dichotomous variables, and Student’s t test for continuous variables. OS was calculated from the date of initial surgical treatment to the date of occurrence of either death from any cause or last contact. DFS was defined as the period from initial surgical treatment to disease recurrence. The Kaplan–Meier method was used to create survival curves, and differences were assessed with the log-rank test. Statistical significance was assumed for a two-tailed p-value of<0.05. To determine independent factors for OS and DFS, the Cox proportional hazards model it was used to determine potential factors, which were entered into a forward regression procedure for the final identification of independent prognostic factors.

We included 226 patients with resectable pancreatic adenocarcinoma in this retrospective study. The median age was 71 (31-89) years, and the male/female ratio was 1.2:1. The presenting symptoms were jaundice and abdominal pain in 65.93% and 47.35% patients, respectively. In the study cohort, 116 (51.33%) patients were smokers, and 41 (18.14%) patients consumed alcohol. Diabetes mellitus was diagnosed preoperatively in 72 (31.19%) patients, and 44 (19.47%) patients were prescribed metformin as diabetes mellitus therapy. Detailed information on major demographic and clinic-pathological characteristics of the study cohort is presented in (Table 1). 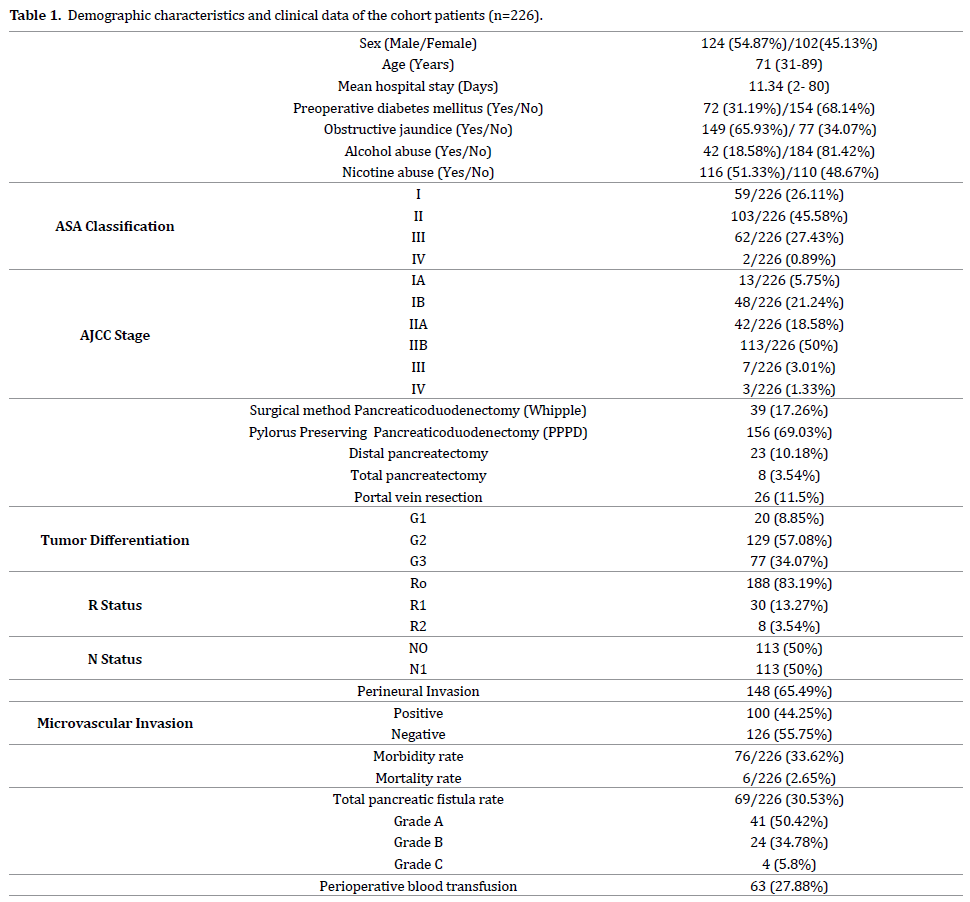 In all study cohort patients, the indication for surgery was suspicion of malignancy. Specifically, 226 patients who were found to have a resectable tumor at exploratory laparotomy underwent subsequent curative pancreatectomy. Among these, 156 (69.03%), 39 (17.26%), 23 (10.18%), and 8 (3.54%) patients underwent PPPD, classic Whipple, distal pancreatectomy, and total pancreatectomy, respectively. Partial resection of the portal vein was necessary in 26 (11.5%) of patients (Table 1).

The perioperative mortality in the first 30 postoperative days was 2.65% (6/266) for the entire cohort. The mean length of hospital stay for the entire cohort was 11.34 (2- 80) days. During the post-operative course, 33.62% (76/226) of the patients in the study cohort developed one or more complications. Additionally, 69 (30.53%) patients developed pancreatic fistula after pancreatectomy. Specifically, pancreatic fistulas developed in 27.18% (53/195) and 69.57% (16/23) of the patients after pancreaticoduodenectomy and distal pancreatectomy, respectively. Finally, 63 (27.88%) patients received blood transfusions (Table 1). 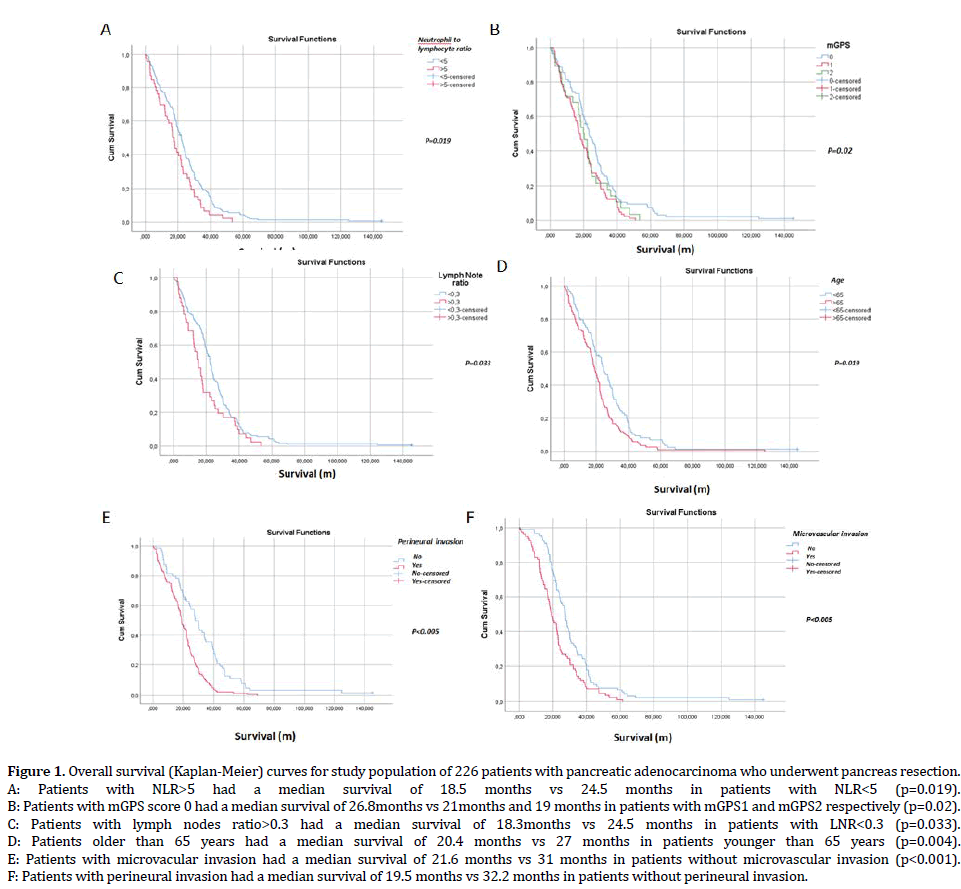 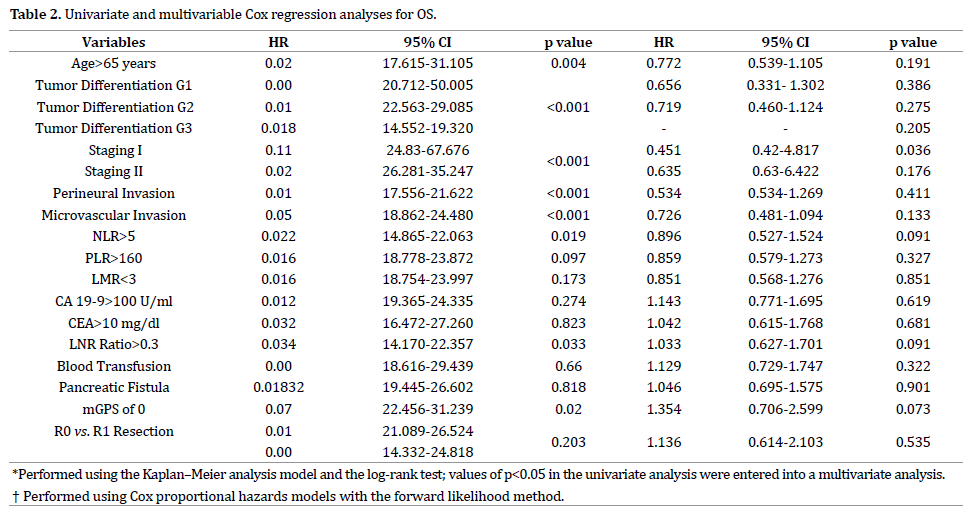 Analysis of the DFS Rates 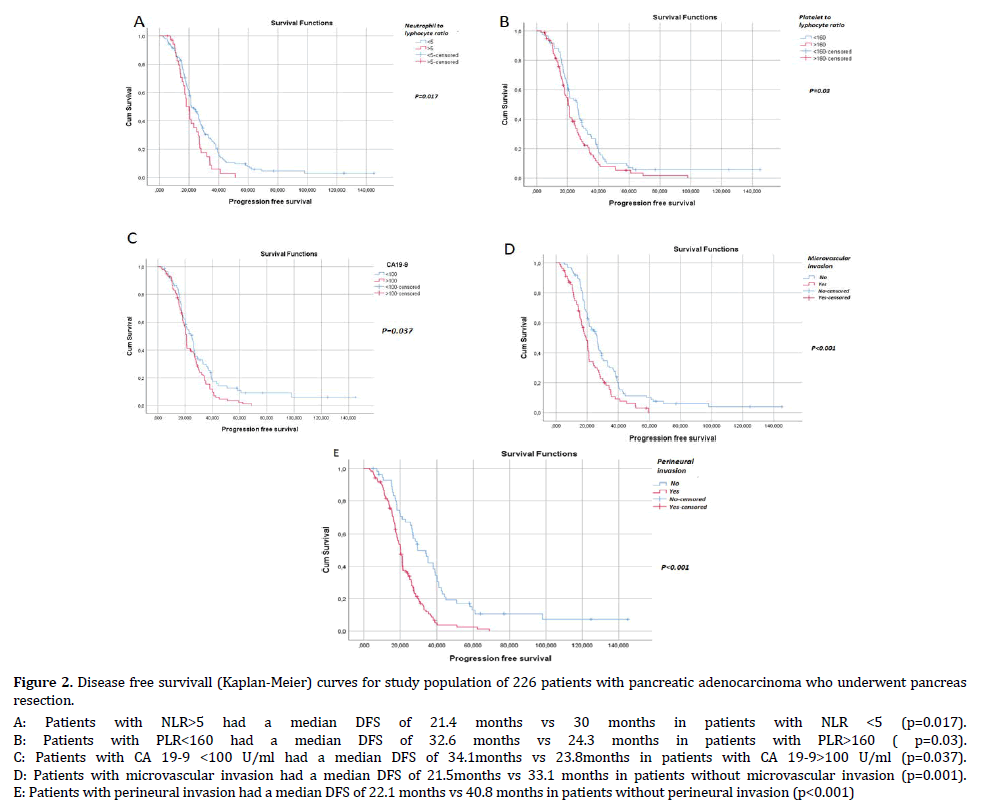 The multivariate analysis revealed that only microvascular invasion, NLR>5, and PLR>160 were independent prognostic factors for DFS (Table 3). 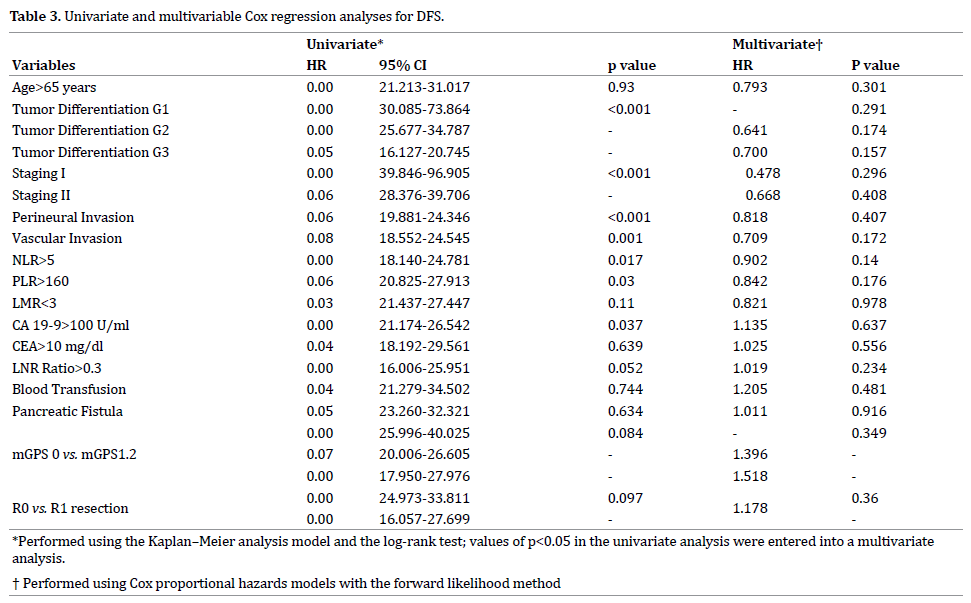 Pancreatic cancer is one of the most lethal malignancies. Surgery remains the only curative treatment option, and there are no long term survivors among patients with unresectable tumors [17]. The five-year survival rate after curative resection varies form 15-25% based on the most recent series [18-20]. However, despite curative resection the actual survival rates remain disappointing, ranging from 4.3% to 10.1%, as reported by two large populationbased studies [21,22]. In the current study elucidated outcomes and prognostic factors in 226 patients with pathologically verified pancreatic adenocarcinoma who were treated between 2004 and 2015. In the current series, only 14/226 (6.19 %) patients survived for more than five years, and the median survival was 23.129 months.

“As the gold standard” tumor marker for monitoring and diagnosing pancreatic cancer patients, CA19-9, provides valuable information to assist in the therapeutic decision-making especially for surgeons. Numerous studies demonstrated that elevated CA 19-9 was associated with poor prognosis [29,30]. Our study established that DFS was lower in patients with CA 19-9 level above 100 U/ml. Conversely, CEA, better known for its utility in colorectal cancer, has been evaluated for pancreatic cancer as well. While the results suggest that CEA’s susceptibility was unacceptably low in pancreatic cancer, recent studies demonstrated CEA as an independent prognostic factor for pancreatic cancer [31,32]. However, we could not demonstrate a strong association between CEA and OS or DFS.

Improvements in pathological evaluation methods for pancreatic cancer have increased the R1 resection rate from 20% to 80% [33]. The influence of resection status on survival is controversial. In the present study, R1 resection was established in 13.27% of the patients after pathological examination. The median OS (23.8 m vs. 19.5 m) and the DFS (29.3 m vs. 21.8 m) were better in patients who underwent R0 resection compared with those who underwent R1 resection. However, our univariate and multivariate analyses failed to show an association between the resection status and OS or DFS.

Lymph node involvement remains the most important prognostic factor of survival in pancreatic cancer. LNR provides information on the number of positive lymph nodes as well as the total number of resected lymph nodes. LNR’s prognostic value in pancreatic cancer has been established by numerous recent studies [34-36]. However, there is no consensus on the best cutoff value for LNR. We used as a cut-off LNR of 0.3 in the current study and found that an LNR>0.3 was an independent negative prognostic factor on OS.

An interaction between pancreatic cancer cells and host immune system, leading to a reduction in the lymphocyte ratio, was recently documented [37]; therefore, we also explored the potential associations of the inflammation markers NLR, PLR, and LMR with OS and DFS in the current study. NLR as a marker of active, cancer-associated inflammation was demonstrated to be an important prognostic factor in several cancers, such as colorectal, gastric, and hepatocellular cancer [38-40]. A recent retrospective study showed that an elevated preoperative NLR was an important prognostic factor for early TNMstage pancreatic cancer. In the current study, we evaluated NLR with a cut-off value of five, based on previous reports and found that NLR>5 was an independent prognostic factor for OS as well as DFS, by univariate and multivariate analyses. PLR as an inflammation marker was recently shown to be a predictor of worse mid-term outcomes in patients with borderline resectable pancreatic cancer [41]. Yu et al. conducted a retrospective analysis and found that a PLR>150 was an independent predictive risk factor for postoperative long-term prognosis in pancreatic cancer [42]. In the current study, PLR>160 was associated with poor postoperative DFS after curative resection in pancreatic cancer patients. Finally, LMR’s prognostic impact on pancreatic cancer outcomes remains unclear. A recent meta-analysis of 1,795 patients showed that an elevated LMR predicts favorable survival [43]. Unfortunately, the current study failed to demonstrate a similar effect of LMR on OS or DFS.

In addition to reflecting an upregulation of inflammatory response, mGPS, which combines CRP with hypoalbuminemia, also reflects the nutritional decline of pancreatic cancer patients [42]. Few studies, thus far, analyze the relationship of mGPS with survival in pancreatic cancer. Most reports implicate mGPS as a strong prognostic factor of recurrence and survival [44-48]. Our results indicating mGPS is an independent prognostic factor of OS are consistent with these findings.

Despite recent systemic treatment advances, the prognosis of patients with advanced PDAC remain poor. Surgery continues to be the only curative therapy and is associated with statistically better survival rates after curative resection. Currently, few predictive factors can identify patients who will benefit the most from available treatment options. We identified microvascular invasion, NLR, mGPS, and LNR as independent prognostic OS factors and microvascular invasion, NLR, and mGPS as independent prognostic factors of DFS. Furthermore our analysis showed that elevated CA 19-9 was a negative prognostic factor for DFS, whereas R1 resection and pancreatic fistula did not have a significant impact on survival or recurrence.

The authors thank Dr. Chatzis Josef and all the members of the Agios Dimitrios General Hospital, for their assistance in data collection.