Context Pancreatic cancers can present with pancreatitis or its complications. Pancreatic choriocarcinoma is an extremely rare disease to involve pancreas. Case report A 27-year-old married woman presented to our facility with abdominal pain and fullness of 20-day duration. She was clinically diagnosed as acute pancreatitis with pseudocyst as a complication. Serum amylase was elevated with CT scan of abdomen showing a cystic lesion involving the pancreas. We approached the cyst with endoscopic ultrasonography and cyst fluid was aspirated and analyzed. Cyst fluid amylase was elevated and cytology revealed germ cell tumor. Serum beta human chorionic gonadotropin was elevated. She had a swelling over the jaw which also revealed choriocarcinoma in histopathological examination. Patient was started with chemotherapy. Conclusion We report this case of pancreatic choriocarcinoma due to its extreme rarity and the diagnostic dilemma it posed.

• Pancreatic ductal cancers and IPMN can present as an acute episode of pancreatitis.

• Endoscopic ultrasonography (EUS) is very useful in evaluating the cystic lesions of pancreas.

• Pancreatic choriocarcinoma can present as pancreatitis as well.

A 27-year-old married woman presented to our facility with abdominal pain and fullness of 20 days duration. She denied alcohol intake and she is a non smoker. There was no history of abdominal trauma or any drug intake for any other illnesses. Our clinical diagnosis was pancreatitis with fluid collection around the pancreas based on the serum amylase and lipase which were 720 U/L (reference range: 23-80 U/L) and 210 U/L (reference range: 0-60 U/L), respectively. CT scan of abdomen revealed huge hypodense lesion in pancreas suggestive of pseudocyst. (Figure 1). Patient also had a small 3x3 cm swelling over the right jaw. We subjected the patient for endoscopic ultrasonography (EUS) which revealed a 6x6 cm cystic lesion involving head and body of pancreas. There was no gallstones visualized. As the EUS showed irregular borders of the cyst we did cyst fluid aspiration for analysis (Figure 2). Cyst fluid amylase, CA 19-9, and CEA were 13,500 U/L, 28 U/mL, and 17 ng/mL, respectively. Cytological examination (fine needle aspiration; FNA) showed large, pleomorphic mononucleated cells having large, hyperchromatic, pleomorphic nuclei and moderate to ample amount of pale or vacuolated cytoplasm and a multinucleated giant cell at the center suggestive of choriocarcinoma (Figure 3). Biopsy of the lesion in left jaw also revealed germ cell tumor. Serum beta human chorionic gonadotropin was 98,000 mg/dL. Interestingly, alphafetoprotein was 9.6 ng/mL which excluded other giant cell tumors except choriocarcinoma. Choriocarcinoma is a germ cell tumor which presents with normal alphafetoprotein and very high beta human chorionic gonadotropin levels. 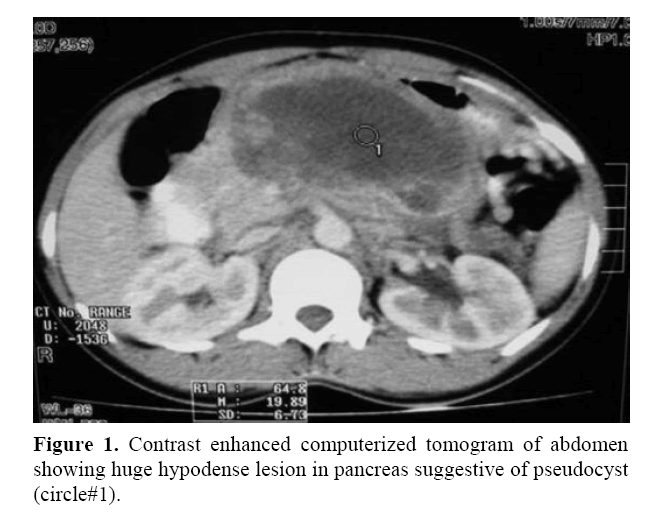 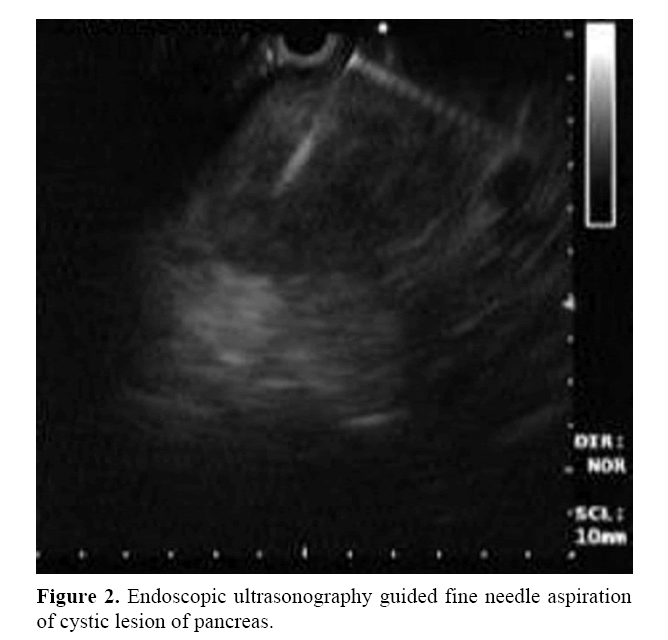 Based on these we made a diagnosis of primary non gestational extragonadal choriocarcinoma involving pancreas with metastasis to jaw. Patient was started on chemotherapy with methotrexate. She is on regular follow-up now.

Pancreatic malignancies can present with pancreatitis and/or its complication pseudocyst in nearly 17.6% of patients [4]. Pancreatic ductal adenocarcinoma is the most common malignant tumor involving pancreas accounting for 85% to 90% of pancreatic tumors [5]. Intraductal papillary mucinous neoplasms (IPMN) can also present with pancreatitis due to its ductal location which may cause obstructive pancreatitis. Choriocarcinoma involving pancreas is a rare disease. Only few case reports available so far. Primary choriocarcinoma (extragonadal non gestational) is still rarer. Only one case report is available as of now in PubMed search [3]. In our case primary pancreatic choriocarcinoma presented as pancreatitis with apparent pseudocyst. Role of EUS in cystic lesions of pancreas is well established recently [6]. Hence we approached the case with EUS and EUS FNA which helped us to come to our final diagnosis. Interestingly, this patient had tumor involving the left jaw as well which might be due to metastasis as histopathology showed the same type of cells. They present with elevated serum beta human chorionic gonadotropin and normal serum alpha-fetoprotein which differentiates it from other germ cell tumors affecting gonads. Choriocarcinoma is an aggressive malignancy with high metastatic potential. It responds well to chemotherapy. Patient was receiving chemotherapy with methotrexate. Methotrexate is the drug of choice for choriocarcinoma. We report this primary pancreatic choriocarcinoma as it is extremely rare disease which can mimic an episode of pancreatitis or its complication namely pseudocyst.