Context Pancreatic cysts may be incidentally detected in asymptomatic patients evaluated for other clinical manifestations. Microcystic adenomas are particularly rare among pancreatic cyst neoplasms. They are benign lesions and can present as solitary pancreatic tumors or as a radiological manifestation combined with other cystic and tumoral lesions affecting different organs. Case report A 50-year-old man presented with hematuria. A computed tomography scan of the abdomen showed a 9-centimeter renal mass in the left kidney consistent with a renal-cell carcinoma as well as a cystic lesion the head of the pancreas. The histopathological study of the cystic mass, following a computed tomography guided biopsy, showed a microcystic adenoma. Therefore, further studies were performed so as to assess the relationship between both lesions and determine the final diagnosis. Conclusions Microcystic adenomas are exceedingly rare tumors among pancreatic cysts. The combination of a solid renal mass and a pancreatic cystic lesion should lead to a broad differential diagnosis. Pancreatic magnetic resonance imaging has been proven to be particularly useful in evaluating cystic masses. The presence of walls and internal septations in the pancreatic mass with gadolinium enhancement should raise the possibility of an underlying Von Hippel- Lindau syndrome.

Renal-cell carcinoma is responsible for most solid renal lesions, hematuria being the most common clinical presentation (50-60%) [1]. However, early-warning signs are often missing, resulting in a delayed diagnosis and advanced metastatic disease. Dynamic intravenous contrast-enhanced computed tomography (CT) is used in the evaluation of every renal mass to define its characteristics and determine the extent of the lesion [2]. Abdominal CT may depict a pancreatic lesion which has remained asymptomatic until that point. In fact, this condition has been reported as the most usual way of presenting pancreatic cystic lesions [3]. Although cystic neoplasms represent less than 10% of the pancreatic neoplasms [4], cystic pancreatic lesions are increasingly being detected owing to the generalized use of abdominal ultrasonography, CT and magnetic resonance imaging (MRI) for the evaluation of different conditions. Microcystic adenoma is a rare pancreatic cystic lesion [4, 5] and when linked with renal-cell carcinoma, the possibility of a neoplasia syndrome may arise. Von Hippel-Lindau disease (VHLD) results from a mutation in the VHL gene leading to the development of several benign and malignant lesions in different organs, characteristically, cystic and vascular lesions [6]. We describe the case of a patient presenting with hematuria due to a renal-cell carcinoma in which a pancreatic lesion was visualized on the imaging study of the renal mass.

A 50-year-old man was admitted to the San Jaime Hospital (Torrevieja, Alicante, Spain) following a two-day history of hematuria without back or abdominal pain. He also did not show dysuria, tenesmus, fever, weight loss or anorexia.

The patient had been well until three months earlier when he presented with back pain and hematuria in another institution. He was successfully treated with antibiotics and remained asymptomatic thereafter.

His past medical history revealed hypercholesterolemia and a 50 g alcohol daily intake. He had had a right renal cyst operated on 12 years before.

An abdominal ultrasonography was performed in the Emergency Room showed a solid 8x8 cm mass in the left kidney and a simple cyst in the right kidney.

The admitting diagnosis of the treating physician was hematuria due to a renal cell carcinoma. Abdominal CT for extension study identified a 9 cm renal mass in the left kidney with areas of necrosis (Figure 1) and a heterogeneous mass in the head of the pancreas measuring 5 cm in diameter. Thus, a new medical approach was needed. Cancer antigen (CA) 19.9 level was normal. A fine needle aspiration of the pancreatic mass was performed; however, the sample was not suitable for pathological diagnosis. We therefore asked for a CT-guided biopsy of the pancreatic mass. In the meantime between both pathological studies, a pancreatic MRI was performed, revealing clusters of simple cysts all over the pancreas (head, corpus and tale) as well as a 5 cm lobulated mass at the head of the pancreas containing multiple cysts with thin walls and internal septations showing high signal on T2-weighted images and with gadolinium enhancement of septations (Figure 2). These findings suggested a microcystic adenoma which was later confirmed in the pathological specimen (Figures 3 and 4). Signs for VHLD were then actively searched for. 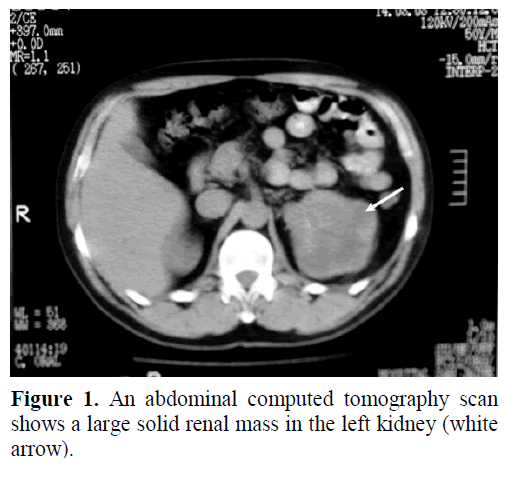 Figure 2. Abdominal magnetic resonance imaging reveals a lobulated mass in the head of the pancreas (white arrow) containing cysts and clusters of simple cysts over the pancreas (black arrow). 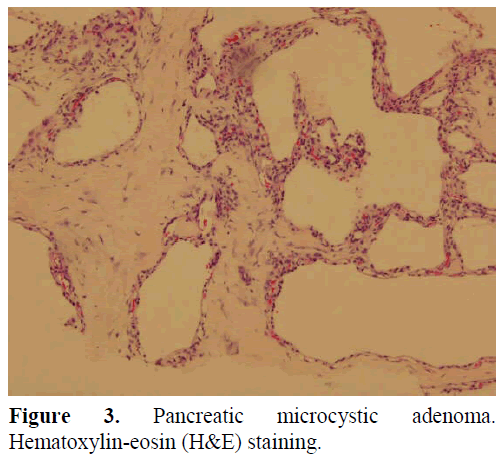 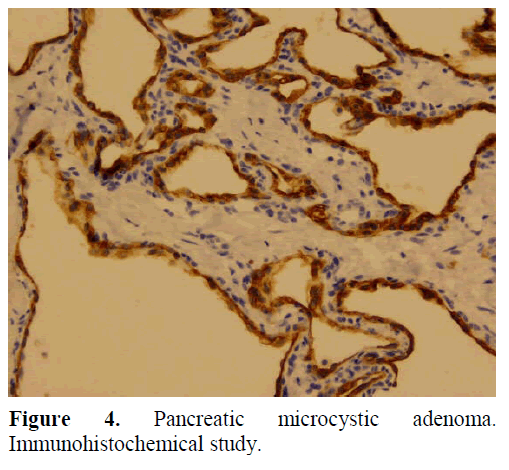 No retinal angiomas were seen on dilated eye examination. A cerebellar hemangioblastoma measuring 1 cm in diameter was easily assessed by contrast-enhanced T1-weighted craniospinal MRI (Figure 5). A second welldefined lesion, also with 1 cm in diameter was found in the spinal cord (Figure 6). Without typical contrast-enhancement in the MRI, the most probable radiological diagnosis is a cyst. The final diagnosis was, therefore, VHLD. 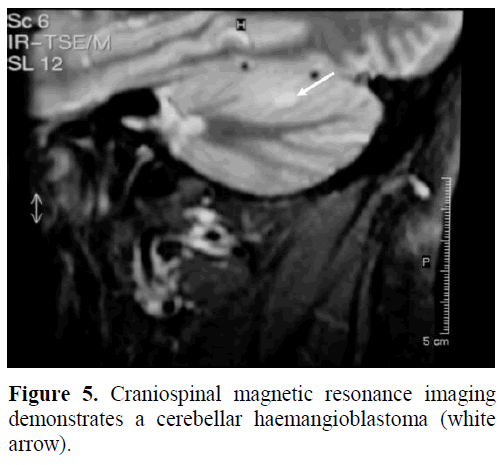 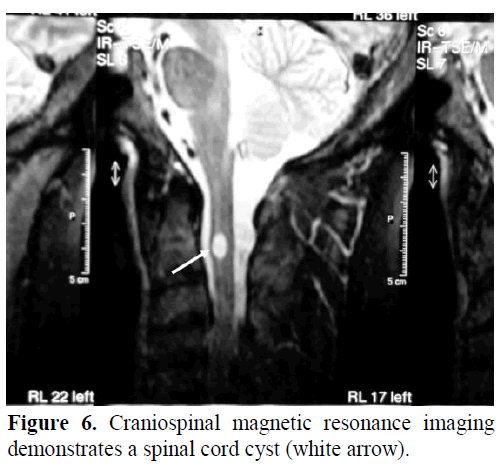 Renal-cell carcinoma accounts for 80-85% of malignant kidney tumors [1]. All potentially malignant localized lesions require surgery [7], allowing pathological diagnosis of the tissue obtained at surgery. Although other histologic types of renal cancer could present as a 9 cm heterogeneous renal mass [1], they are treated in the same way as renal-cell carcinoma. Therefore, since renal-cell carcinoma is responsible for most malignant renal lesions, the differential diagnosis was focused on the pancreatic mass whose etiology was far more doubtful.

Pancreatic metastasis from renal-cell carcinoma is a rare presentation. However, this condition has already been reported [10, 11]; in fact, the most common primary tumor origin of solitary pancreatic metastasis is renal-cell carcinoma. A pathological study is required to differentiate primary and secondary pancreatic tumors. Although dynamic intravenous contrastenhanced CT is an accurate technique for detecting and characterizing a pancreatic mass [2], an MRI with intravenous gadolinium is superior to CT in evaluating some findings. MRI may depict additional septa or enhancement [12, 13]. The evaluation of the pancreatic mass with MRI in this particular patient identified the cystic lesion and was particularly useful in determining the presence of thin walls and internal septations with gadolinium enhancement, which is typical in microcystic adenomas [14]. Pancreatic cysts occur in approximately 40% of patients with VHLD while microcystic adenomas are less common, with a reported incidence of 4% [5]. Interestingly, a recent review article of pancreatic cystic neoplasms [4] adds a lot of information regarding the pathology, diagnosis and management of these tumors. Chromosomal alterations of the gene for VHLD have been found in DNA extracted from many microcystic adenomas in several series [15]. They are benign lesions [16] and, although management has not been fully established, if the likelihood of these lesions becoming symptomatic is very low, non-invasive treatment with continued radiological observation is acceptable [4, 17]. Hemangioblastomas of the central nervous system are the most common tumors in VHLD, affecting 60-80% of all patients [18]. They are normally placed in the cerebellum or the spinal cord, and associated cysts occur in 30-80% of hemangioblastomas. A cerebellar hemangioblastoma was found in our patient together with a well-defined spinal lesion consistent with a cyst.

The combination of renal-cell carcinoma, pancreatic microcystic adenoma, pancreatic cysts and cerebellar hemangioblastoma provides the diagnosis of VHLD. The patient had no past familiar history of VHLD, suggesting a type 1 VHLD. It is an autosomal dominant neoplasia syndrome resulting from a mutation in the VHL gene on chromosome 3 [19]. This mutation leads to the development of benign and malignant lesions in many different organs [6], including: the central nervous system (brainstem, cerebellum, spinal cord), retina, endolymphatic sac, adrenal glands, pancreas, kidneys, epididymis (male) and broad ligament (female). In 1996, there were more than 137 distinct mutations reported in affected families, including missense, nonsense, microdeletion, insertion, deletion and splice site [20]. Any of these mutations can be detected in nearly 100% of the affected families [21]; however, genetic testing is a challenge in de novo cases. Only 20% of such patients test positive in genetic studies [22]. Although genetic studies are not needed for the diagnosis of VHLD, the patient was found to have a deletion of exon 3 of the VHL gene. His relatives are now being tested for VHLD; he has no children to be studied.

Since the renal-cell carcinoma was 9 cm in diameter and perinephric fat was involved, the kidney could not be preserved and a total nephrectomy (including perirenal fat) was performed as recommended [23]. The diagnosis was confirmed by the pathological sample (Figure 7). The patient is now symptom-free and is being followed in outpatient consultation. Because VHLD is a chronic problem with a high frequency of new lesions arising with time and the recurrence of those already treated [17], patients need to be included in a routine scheduled follow-up for screening and early diagnosis which has been proven to increase median survival [24]. The recommended tests [17] in VHLD type 1 are: ophtalmoscopy, plasma or 24 h urinary catecholamines, MRI of craniospinal axis and CT of abdomen (both radiological explorations before and after contrast infusion) and audiological function tests only if clinically indicated. All the screening tests are performed yearly. 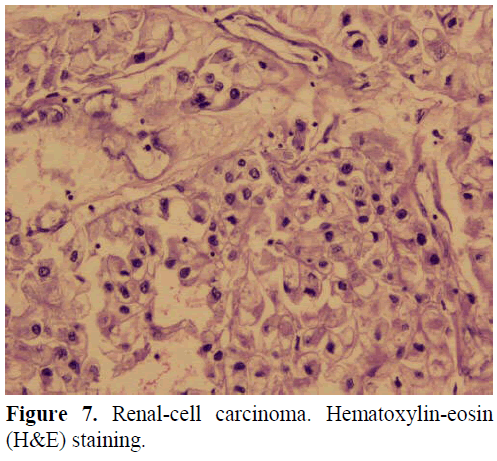 However, the optimal screening test for abdominal manifestations of patients with VHLD remains unclear though. Abdominal ultrasound has poor sensitivity and a negative predictive value especially for adrenal and pancreatic lesions. CT abdominal examination remains an excellent test for screening and is fully accepted by most physicians [17], who use MRI only in patients with renal impairment or contrast allergy. However, many authors believe that MRI provides high definition abdominal imaging without radiation risk [14], which is especially important in young patients with VHLD who need yearly screening radiological tests. Furthermore, MRI allows one to perform abdominal and craniospinal imaging in the same visit with only one injection of contrast, making it easier for the patient to cope with this chronic problem. It has also recently been reported [13] that MRI can provide more accurate information regarding renal cysts than CT but additional studies are needed for the appropriate interpretation of MRI imaging of renal cysts. With approximately 1 per 36,000 people affected [25], VHLD is a rare syndrome commonly affecting young patients with a mean age onset of symptoms and signs at 31 years of age [24]. Although in the present case the patient was a 50-year-old and he was admitted because of hematuria due to a renalcell carcinoma (that is know to be the main cause of death [24]), he is still alive. In conclusion, our case illustrates two rare conditions. First, the delayed presentation of the symptoms and second, the presence of a pancreatic microcystic adenoma, which has only been reported in 4% of patients as noted above.