Context Pancreatic neuroendocrine tumors (pNETs) are notoriously resistant to currently available chemotherapy agents.Preclinical data has suggested synergy between temozolomide and capecitabine. Objective To report a retrospective data on the efficacy and safety of capecitabine and temozolomide (CAPTEM regimen) in patients with metastatic pancreaticneuroendocrine tumors (pNETs) who have failed prior therapies. Methods We reviewed the medical records of 7 patientswith metastatic pNETs who had had progressive cancer prior to treatment despite therapy, including long-acting releaseoctreotide (60 mg/month), chemotherapy and hepatic chemoembolization. Capecitabine was administered at a flat dose of1,000 mg orally twice daily on days 1-14 and temozolomide 200 mg/m2 was given in two divided doses daily on days 10-14of a 28-day cycle. Tumor assessments were repeated every two cycles and serum tumor markers were measured every cycle. Response to treatment was assessed using Response Evaluation Criteria in Solid Tumors (RECIST) parameters, and toxicity was graded using the National Cancer Institute Common Terminology Criteria for Adverse Events (CTCAE), version 3.0. Results Among 7 patients treated, three patients achieved a partial response, and two patients had stable disease. Totalresponse rate was 43%, and clinical benefit (responders and stable disease) was 71%. Median duration of response was 8months (range: 4-12 months). Grade 3 and 4 toxicities included grade 3 thrombocytopenia in one patient and grade 3 fatigue in one patient. The most common toxicities were grade 1 and 2 neutropenia, grade 1 fatigue, grade 1 and 2 hand-foot syndrome. Conclusions Our retrospective study showed that modified CAPTEM regimen was well-tolerated and produced comparable response to historical data in neuroendocrine tumors, including pNETs. Our study is unique as it only included patients with pNETs. Further prospective studies are warranted to evaluate the combination of CAPTEM regimen with targeted therapies in pNETs.

Pancreatic neuroendocrine tumors (pNETs) account for 3 to 5% of pancreatic malignancies with an incidence of around 1,000 cases per year in the United States [1]. However, the incidence of these tumors seems to be rising, partly due to earlier detection of asymptomatic lesions [2]. They represent a heterogeneous group of tumors with varying biology and clinical behavior based in their functionality and differentiation. Most of these tumors are sporadic although a link with hereditary syndromes including MEN1, von Hippel-Lindau (VHL), neurofibromatosis type1 and tuberous sclerosis deserves mention as they reveal the underlying carcinogenesis [3].

The neuroendocrine tumors are classified by WHO (Table 1) based on their differentiation in order to assess their biological behavior and their potential for a malignant phenotype.

Unresectable pNETs have a poor prognosis with a median survival of 24 months with distant metastatic disease [2]. pNETs are notoriously resistant to currently available chemotherapy agents [4]. Streptozocin based regimens, including streptozocin-doxorubicin and streptozocin-5-FU, have shown efficacy in the past but come with the burden of toxicity and cumbersome regimens [5]. Recently, the oral alkylating agent temozolomide has emerged as a promising agent in this setting. A phase II trial consisting of the combination of temozolomide and thalidomide demonstrated an objective response rate of 45% in pNETs versus only 7% in metastatic carcinoid tumors [5]. Another study combined temozolomide with bevacizumab yielded a response rate of 24% [6]. In vitro studies have suggested a synergistic activity with the combination of capecitabine, an oral form of 5-FU, with temozolomide [7]. The data also suggests that the synergy is dependent on the sequence of how the drugs are administered. It requires that temozolomide be administered after exposure of neuroendocrine tumor cells to capecitabine. Investigators believe that this synergy is due to depletion of the DNA repair enzyme, methylguanine DNA methyltransferase (MGMT) by capecitabine, thereby potentiating the effect of temozolomide [8]. These in vitro data have been supported by clinical reports that demonstrated high objective response rates with CAPTEM in patients with metastatic neuroendocrine tumor [9, 10].

Inspired by these data, CAPTEM regimen has been explored in metastatic neuroendocrine tumor patients. We here report a retrospective data on seven patients with metastatic low- and intermediate-grade pNETs, who were treated with a modified regimen as detailed below.

We conducted a retrospective chart review of patients with advanced neuroendocrine tumors. We selected patients with metastatic pNET who had progressive cancer prior to treatment despite therapy, including long-acting release octreotide (60 mg/month; Sandostatin LARTM, Novartis Pharmaceuticals Co., East Hanover, NJ, USA). We identified 7 patients who were treated with the CAPTEM regimen between 2006 and 2013. Pharmacy database was done to indicate patients for who were treated with CAPTEM for PTENs during this period. Review of electronic charts was performed. The data including age, sex, diagnoses, dose of CAPTEM, and CT scan results were collected. Patients received capecitabine at a flat dose of 1,000 mg orally twice daily on days 1-14 and temozolomide 200 mg/m2 in two divided daily doses on days 10-14 of a 28-day cycle (Figure 1). Ondansetron 8 mg was prescribed before each dose of temozolomide. Doses were adjusted to minimize the number of tablets required.

We identified 7 patients (4 males and 3 females) with metastatic pNET (low- and intermediategrade) who were treated with CAPTEM (Table 2). The time from diagnosis until onset of treatment with CAPTEM ranged between 1 year and 3.5 years. All patients had evidence of disease progression before initiation of treatment with CAPTEM. The chemotherapeutic agents previously used included doxorubicin, streptozocin, cisplatin and gemcitabine. 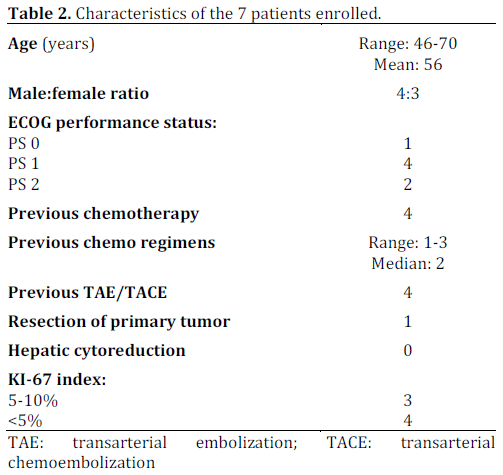 This CAPTEM regimen was generally well tolerated. Grade 3 and 4 toxicities included only grade 3 thrombocytopenia in one patient and grade 3 fatigue in one patient. The most common toxicities were grade 1 and 2 neutropenia, grade 1 fatigue, grade 1 and 2 hand-foot syndrome. There were no grade 4 toxicities, hospitalizations, opportunistic infections or deaths. Two patients required dose reductions because of grade 2 hand-foot syndrome.

The only potential cure for localized pNET is surgical resection. Until recently, the only standard option for advanced disease was a somatostatin analogue, most commonly used in only functional tumors to control symptoms associated with the carcinoid syndrome. It was the PROMID study, a prospective, randomized placebo-controlled study which demonstrated a median time to tumor progression of 14.3 months in the long-acting release (LAR) octreotide group versus 6 months with the placebo group [13]. The overall survival benefit was limited by crossover of patients in the placebo group to octreotide LAR at tumor progression. As expected, octreotide LAR did not produce significant tumor regression. More recently, two new drugs, everolimus and sunitinib, were approved by FDA for the treatment of advanced pNETs [14]. Everolimus, a mammalian target of rapamycin (mTOR) inhibitor, improved progression-free survival when compared to placebo: median 11.4 months versus 5.4 months, respectively. Analysis of secondary endpoints showed a response rate by RECIST criteria of 5% in patients who received everolimus. Sunitinib, a multi-tyrosine kinase inhibitor, demonstrated an improved progression-free survival when compared to placebo: median 11.4 months versus 5.5 months, respectively [15]. In addition, there was a 9.3% tumor response rate in patients treated with sunitinib [16].

Our unique dosing of CAPTEM resulted in a well tolerated oral regimen with a good safety profile in this retrospective review. Though the number of patients is small, it triggers interest for future studies. The toxicity profile is also superior to chemotherapy regimens, in particular those observed with streptozocin-based regimens. Future prospective trials should assess temozolomide monotherapy versus CAPTEM to test the hypothesized synergy between these two agents. In addition, a randomized study comparing temozolomide versus streptozocin-based regimens should be considered too in order to establish a standard of care for this disease. We also suggest that CAPTEM offers a viable option with potential for a high rate of response in a neoadjuvant therapy for locally advanced, unresectable pNETs.