Acute Pancreatitis Associated with Neuroendocrine Tumor of the Pancreas

Context Endocrine tumors are a less commonly known cause of acute pancreatitis. This report presents the case of a patient who have had acute pancreatitis secondary to a pancreatic endocrine neoplasm. The majority of the cases previously reported were nonfunctioning tumors and the pancreatitis tended to be mild. Moreover, the majority of the tumors were diagnosed in advanced stages, hindering curative treatment. Case report A 31-year-old female patient presented with epigastric pain and a history of recurrent acute pancreatitis. Preoperative imaging investigation showed a dilation of the distal portion of the main pancreatic duct and intra-operative ultrasound demonstrated a mild stricture of the main pancreatic duct at the body of the pancreas. Frozen-section examination revealed a malignant neoplasm, subsequently identified as a neuroendocrine carcinoma, and a distal pancreatectomy with splenectomy was performed. Acute pancreatitis was an early symptom in this patient who underwent a hopefully curative resection. Conclusion The authors conclude that, in patients with acute pancreatitis of unknown origin, the possibility of a non-functioning neuroendocrine tumor should be investigated.

Pancreatic endocrine tumors are rare entities, comprising only about 5 to 10% of all pancreatic tumors and 2% of all gastrointestinal cancers [1, 2]. They can be classified as functioning and non-functioning neoplasms.

This is a report of a patient with a nonfunctioning pancreatic endocrine tumor whose clinical syndrome was manifested by recurrent episodes of acute pancreatitis (AP).

A 31-year-old female patient presented with a three-year history of sporadic epigastric pain, with spontaneous improvement, and a weight loss of 6 kg. Four months before admission, she experienced an episode of acute pancreatitis.

There were no co-morbidities, and she denied history of alcohol abuse, use of tobacco and abdominal trauma. Furthermore, there was no familiar history of neoplasms or chronic pancreatitis.

Physical examination was unremarkable and the biochemical workup showed a hemoglobin concentration of 10.8 g/dL (reference range: 12-16 g/dL) and an amylase serum level of 260 IU/L (reference range: 60- 180 IU/L), with a normal CA-19.9 level. Abdominal and endoscopic ultrasonography (EUS) did not demonstrate gallstones or choledocholithiasis, but it showed a main pancreatic duct (MPD) dilation in the pancreatic body and tail which could not be explained by the presence of any other lesion. Abdominal magnetic resonance imaging (MRI) showed a slightly increased pancreas in its distal portion, associated with enhancement of the peripancreatic fat and a slight dilation of the MPD (Figure 1). 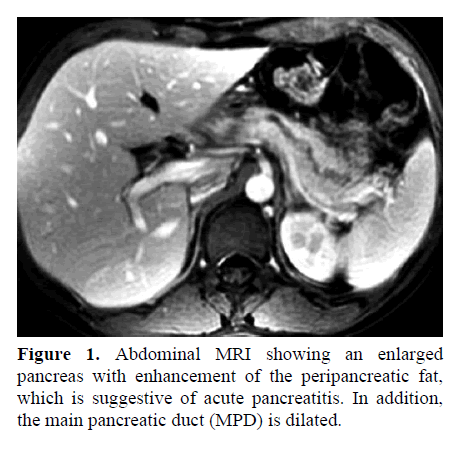 Figure 1. Abdominal MRI showing an enlarged pancreas with enhancement of the peripancreatic fat, which is suggestive of acute pancreatitis. In addition, the main pancreatic duct (MPD) is dilated.

Magnetic resonance cholangiopancreatography (MRCP) confirmed the distal dilation of the MPD, which presented a slightly irregular shape and sudden narrowing in its middle part (Figure 2). 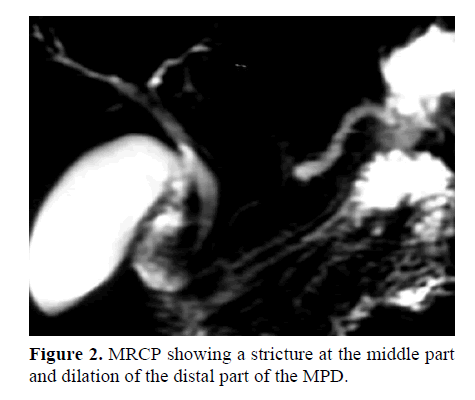 Figure 2. MRCP showing a stricture at the middle part and dilation of the distal part of the MPD.

Laparotomy was indicated with the presumption that the episodes of AP were due to ductal obstruction secondary to a possible neoplastic lesion. Intraoperative US evaluation showed stricture of the MPD in the pancreatic body, about 1.5 cm to the left of the portal-mesenteric trunk (Figure 3). 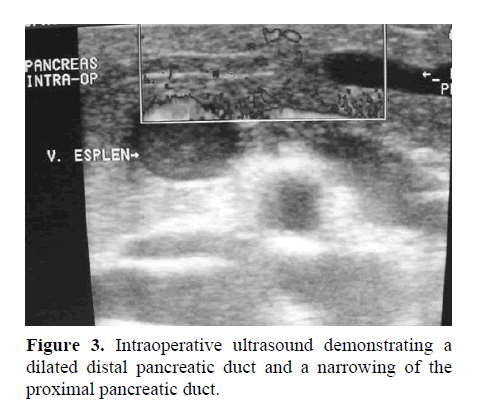 A segmental pancreatectomy was performed, including the strictured area (Figure 4). Frozen section evaluation of the lesion was suggestive of pancreatic adenocarcinoma compressing the adjacent MPD and, accordingly, a distal pancreatectomy with splenectomy was carried out (Figure 5). 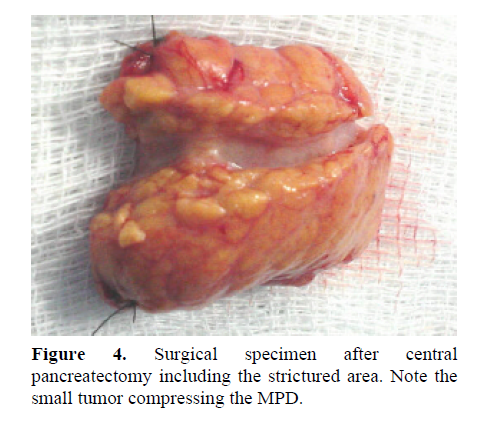 Final pathologic examination showed a 0.5 cm neuroendocrine carcinoma (histologic degree 1). The surgical margins were diseasefree; there was no nodal involvement and the parenchyma presented focal fibrosis and acinar atrophy. The results of immunohistochemistry were positive to cromogranin, sinaptofisin, insulin and glucagon.

The postoperative course was uneventful, without evidence of pancreatic fistula, and the patient was discharged on the 5th postoperative day. Eighteen months after treatment, the patient is well and free from disease recurrence.

Neuroendocrine tumors comprise a wide group of neoplasms. According to the WHO classification (2000) [3], the current denomination for these tumors should be gastro-entero-pancreatic neuroendocrine tumors (GEP-NTs). The association between GEP-NTs and AP is rare. In western countries, the main causes of AP are calculous cholecystopathy and alcohol abuse [4]. Other less common causes include trauma, adverse drug reactions and viral infections. Exocrine pancreatic tumors can also lead to AP, although much more frequently than GEP-NTs.

English language medical literature reports 23 cases of pancreatic GEP-NTs associated with episodes of acute pancreatitis [5, 6, 7, 8, 9, 10, 11, 12, 13, 14, 15, 16, 17, 18] (Table 1). The majority of these tumors were nonfunctioning and were diagnosed in advanced stages, with an overall 35% mortality rate. Ten of the 22 patients with available data had already presented lymphatic or organ metastasis by the time of diagnosis. In the present report, AP was an early signal which was fundamental to early diagnosis and treatment. In addition to neoplastic ductal obstruction, which could be the most important etiologic factor of AP in the present case, other possible etiologies include pancreatic enzyme activation inside the tumor cells or ischemia secondary to vascular occlusion by malignant cells [17].

Gender distribution of GEP-NTs is 52% for males and 48% for females, with a mean age of 48 years. It should be stressed that AP in these patients was usually mild, and only two cases presented as severe disease. More than one third of GEP-NTs were located at the pancreatic head (37%); however, due to their slow growth, they rarely caused jaundice.

The precise definition of the neoplasm site and the measurement of the extension of the disease are essential for correct treatment. The methods most often used for tumor localization are: conventional or endoscopic ultrasonography CT scan; PET scan; selective angiography, histologic-specific radiolabeled scintigraphy and venous hormonal gradient (for functioning GEP-NTs). More recently, biochemical determinations, including chromogranin A serum levels have been developed.

CT scans and MRI do not show high sensitivity or specificity in the diagnosis of these lesions. Helical CT can increase the accuracy rate, especially if it is employed in conjunction with PET scan. In turn, EUS seems to be the best diagnostic tool for determining the size, the extension of the tumor to and its relationship with adjacent structures (93% sensitivity and 95% specificity) [19]. Because GEP-NTs and their metastases have a high somatostatin-receptor density, octreoscan is another useful diagnostic tool.

The initial treatment of functioning GEP-NT is the control of symptoms caused by excessive hormonal production [20]. Then, it should address the tumor itself. By the other hand, the standard treatment of the nonfunctioning localized tumor is surgical resection. The type of resection depends upon tumor localization. Lesions situated at the head of the pancreas or at the uncinate process can be treated by a classical pancreaticoduodenectomy. In most cases, tumor enucleation represents a good alternative, although, this procedure increases the occurrence of pancreatic fistula [20].

There are numerous treatment options for advanced lesions or metastatic disease. Somatostatin analogues have shown to be of value for palliation, tumor size reduction and symptom remission. There is a 75% response rate and the survival rate is higher when compared to chemotherapy alone.

The prognosis of GEP-NTs is much better than for the patients bearing pancreatic adenocarcinoma. The most important prognostic factor is the presence of liver metastasis, since the 5-year survival rate is 80% in the absence of hepatic metastasis and 50% in the presence of diffuse liver metastasis [22]. The low degree of malignancy and the absence of metastatic disease in the case reported herein suggests that surgery was curative and no further treatment was necessary in this patient.

In conclusion, the possible presence of a pancreatic endocrine tumor should be excluded in the presence of AP of undetermined etiology.