Context Orlistat is a pancreatic lipase inhibitor licensed for the treatment of obesity. As obesity rates increase and non-prescription dispensing of orlistat increases, an awareness of its adverse effects is of crucial importance as complications arise more frequently from increased use. Orlistat induced pancreatitis has been described only once previously, but without a diagnostic increase in serum amylase. Case report We report the case of two patients who developed severe acute abdominal pain and elevated pancreatic enzymes at 2 and 10 days after starting orlistat. In one case no alterative precipitant was identified. In the other, a predisposing history of pancreatic injury was present. In both cases all other contributory causes were excluded. Conclusions Our reports suggest orlistat can trigger drug induced acute pancreatitis in certain patients. For patients presenting with abdominal pain soon after commencing orlistat, a diagnosis of pancreatitis must be considered. We also recommend cautious use of orlistat in patients at risk of pancreatic injury.

Orlistat is a pancreatic lipase inhibitor licensed for the treatment of obesity. The drug is available as a nonprescription medication in many developed countries. Increased use will result in an increasing frequency of adverse event; knowledge of these is of critical importance. Only one case report of orlistat induced pancreatitis has been described to our knowledge in the literature, but without a diagnostic rise in serum amylase. Drug induced pancreatitis is a rare but important cause of pancreatic injury. Isolation and removal of the offending agent is important for long term outcome. We report the case of two patients who developed acute pancreatitis with elevated pancreatic enzymes following orlistat therapy.

A 73-year-old lady presented with a 12 hour history of upper abdominal pain radiating into the back associated with nausea and vomiting. No other antecedent illness was reported. Past medical history included depression, hiatus hernia and successful right hemicoloectomy for localised colorectal carcinoma over 5 years ago (for which histology and multiple follow up computed tomography (CT) confirmed complete and total resection).

Omeprazole and fluoxetine were her only long-term medications. Orlistat was commenced just 10 days previously for obesity. There was no history of alcohol intake, nor any significant family history of note. 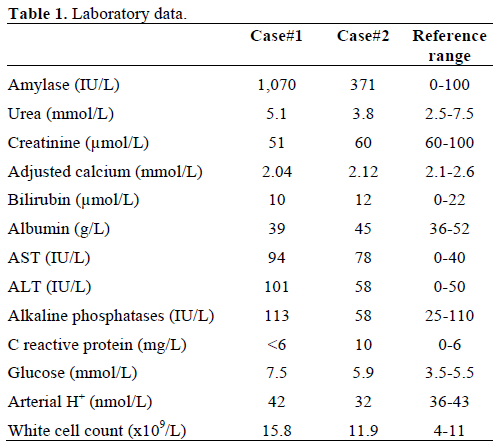 A 45-year-old lady presented with a six hour history of central abdominal pain radiating across the upper abdomen associated with nausea but no vomiting. She had a past medical history of depression, asthma, and known alcohol excess (40 units week per week) and one previous episode of known alcohol induced pancreatitis one year previously. The patient was taking long term thiamine, vitamin B co-strong tablets, venlafaxine and levomepromazine. Orlistat was recently commenced two days before the onset of symptoms.

A presumptive diagnosis of acute pancreatitis was made, with orlistat as a possible precipitant and alcohol as a contributory co-factors. The patient was managed conservatively with intravenous fluids and analgesia and left hospital three days later.

Acute pancreatitis is a surgical emergency characterised by upper abdominal pain, nausea and vomiting [1]. Pathogenesis is suspected to involve enzymatic autodigestion of the pancreas. Gallstones and ethanol account for over 80% of cases. Hypertriglyceridaemia, hypercalcaemia, and infection are rarer causes. Drugs are implicated in only 2% of cases. The identification of a causative agent is important as removal will both facilitate recovery and help reduce recurrence [2].

The association between orlistat and pancreatitis has been reported to our knowledge only once in the literature [3]. In contrast with the previous report, our cases demonstrated significant increases in serum amylase.

Pancreatitis is classically diagnosed in the presence of either raised serum amylase or lipase in the context of characteristic abdominal pain [4]. A raised amylase of over 4 times the upper limit was diagnostic in our first case, but is not mandatory to confirm the diagnosis.

Drug reactions are demonstrated by proving causation; other triggering factors must be excluded and a temporal association demonstrated between drug commencement and the onset of pancreatitis. In both cases a normal bilirubin and unremarkable abdominal ultrasound (normal hepatobiliary tree without calculi) suggested that obstructive gallstone pathology was unlikely. Both patients had normal metabolic profiles which excluded calcium or lipid abnormalities. No evidence of contributory viral influence (hepatitis, Epstein-Barr virus, cytomegalovirus, etc,) was apparent.

In both patients orlistat was the only newly commenced drug and no long-term medication was associated with pancreatitis. In our first case, use of the Naranjo probability criteria suggests orlistat was the primary aetiological agent [5]. In our second case, it is likely that ethanol use was a contributory background risk factor whilst the introduction of orlistat (just two days prior to admission) was an active precipitating agent.

Orlistat is a lipstatin derivative which functions as a potent inhibitor of gastric and pancreatic lipase [6]. It is indicated for treatment of obesity to supplement a hypocaloric diet and lifestyle modifications in patients with a BMI greater than 30 kg/m2 or BMI greater than 28 kg/m2 with additional risk factors (diabetes, hypertension, hyperlipidaemia, etc.) [7].

Hydrolysis and absorption of dietary triglycerides are inhibited and the compounds are excreted undigested in faeces [8]. Clinical benefit is seen within 48 hours. This produces common gastrointestinal side-effects: steatorrhoea, flatulence and abdominal bloating. These are also treatment effects and are proportionate to the overall fat intake to stimulate voluntary dietary modification. Drug interactions are known to involve cyclosporine and thyroxine and none were relevant to our case.

Orlistat has minimal bioavailability and is mostly metabolised in the gastrointestinal tract [9]. Any purported causative mechanism most likely involves local effects on pancreatic enzymes/metabolites within the acinar ducts and duodenum. Direct destructive effects to intestinal villi have been reported in animal models but not confirmed in human studies [10]. Like other cases of drug induced pancreatitis, direct toxicity or hypersensitivity may be relevant.

Orlistat has a good safety profile [11] but previous cases of serious adverse hepatic events have been reported: hepatic cholestasis, subacute liver failure and hepatic necrosis were described in previous reports [12, 13, 14, 15]. Placebo controlled trials did not yet yield higher rates of pancreatitis [16, 17].

Orlistat is currently contraindicated in patients with chronic malabsorption syndromes, cholestasis and breastfeeding but not in cases of previous pancreatitis [18]. From our cases it may be reasonable to suggest strong caution where there is a previous history of pancreatitis, alcohol excess or serious predisposition to pancreatic injury.

Rising rates of obesity and the approval of nonprescription sale in Europe [19] and the United States [20] suggest the use of orlistat will rise markedly. Increased awareness and early detection of adverse clinical events will be of the crucial importance as more complications are seen from increased use.

We present two cases of patients who presented with acute pancreatitis soon after the commencement of orlistat. We suggest the drug had a contributory effect and that knowledge of this potential adverse event is of clinical importance.

For any patient commenced on orlistat and presenting with new onset severe abdominal pain, the diagnosis of pancreatitis should be considered. Whilst the drug is generally safe, in groups with pre-existing risk factors for pancreatitis, it should be introduced cautiously and both patients and clinicians remain vigilant for the clinical features of pancreatic injury.