Over the last decade, human recombinant activated protein C (Xigris®, Eli Lilly, Indianapolis, IN, USA) became established in the management of severe sepsis. This was primarily based on the publication of the PROWESS study in 2001 [1]. This major world-wide study of Xigris® in severe sepsis randomized 1,690 patients (850 to receive Xigris® and 840 to receive placebo). Non-stratified analysis of results showed 259 deaths (30.8% mortality) in the placebo group compared to 210 (24.7%) in the treatment arm. This difference was highly significant and persisted at 28 days [1]. A likely principal side effect of modulation of the coagulation cascade is haemorrhage and there were 30 serious bleeding events in the treatment arm of the PROWESS study compared to 17 in the placebo group; however, this difference was not statistically significant (P=0.06). Xigris® rapidly became an essential component of management algorithms for the treatment of patients with severe sepsis [2].

Despite widespread use of Xigris® persistent doubts regarding its efficacy and safety remained. In response to these doubts the PROWESS-SHOCK trial was conducted [3]. One thousand, six hundred and ninety-seven patients with infection, systemic inflammation and shock were randomised to receive either Xigris® or placebo. In comparison to placebo, administration of Xigris® did not reduce mortality at either 28 or 90 days following the commencement of treatment. Publication of the findings of this study earlier this year provided robust data against the continued use of Xigris® in severe sepsis and as a consequence the manufacturer withdrew the agent from the marketplace as a treatment for sepsis.

Within the PROWESS study 62 patients with acute pancreatitis and severe sepsis received Xigris®. Subgroup analysis of these patients demonstrated a trend towards a reduction in mortality (24% vs. 15%) in those treated with Xigris® [1]. It is important to emphasise that the decision to withdraw Xigris® was made on the basis of a lack of efficacy and not of a lack of safety and whether treatment with Xigris® could modify the disease course in acute pancreatitis remains an unanswered question.

Early acute pancreatitis is characterized by an intense systemic inflammatory response rather than intra-abdominal sepsis [4]. There is evidence both from experimental models [5, 6] and from clinical studies [7, 8] that microvascular thrombosis in the pancreatic vascular bed is a mediator of pancreatic parenchymal necrosis and is also involved in the endothelium-inflammatory cell interplay. Although these findings would support (in theory) the use of activated protein C “early” in the disease course of acute pancreatitis, one of the major causes of death in the severe form of this disease is peri-pancreatic haemorrhage [9], raising concerns about the safety of a drug with anticoagulant properties.

Twenty-five adult male Sprague-Dawley rats with a median weight of 280 g (range: 230-340 g) were allowed access to food and water ad libitum. Prior to the commencement of the experiment the animals were housed in metabolic cages with controlled temperature and 12-hour light-dark cycles for at least 1 week. During the course of the experiment animals were monitored in compliance with current animal care regulations and analgesia and supplemental fluids administered.

A single intraperitoneal injection of L-arginine diluted in sterile 0.15 M saline was administered to unanaesthetised rats to induce pancreatitis. A concentration of 300 mg per 100 g body weight prepared as a 30% (weight/volume) solution was given. The volume of injection administered was limited to 10 mL/kg body weight.

Xigris® used in this study is produced by recombinant techniques using human tissue. When used in animals cross-reactivity leads to antibody formation if used for more than 48 hours (Charles Brigden, Eli Lilly, Indianapolis, IN, USA; personal communication). In rats, Xigris® should be given by intravenous bolus injection and exhibits a biphasic half-life (t1/2 alpha is 13 minutes and t1/2 beta is 30 minutes) with 90% eliminated by hepatic metabolism within 2 hours. In man, the beneficial effects on coagulation cascades and microcirculation are sustained after a single bolus dose.

In a randomised controlled trial of intravenous Xigris® in severe sepsis [1], a dose of 24 μg/kg/h over a 96-hour period (576 μg/kg per day) was found to reduce mortality. A review of published literature examining the role of Xigris® in various experimental animal models of acute inflammation reported a range of bolus intravenous concentrations (from 100 μg to 2 mg per kg body weight) given both prophylactically (10-30 minutes pre-insult) and post-insult (up to 60 minutes after), which ameliorated the injury [8]. Consequently a bolus concentration of 500 μg per kg body weight from the mid-range of reported efficacy has been adopted in this study.

Animals were sacrificed at forty-eight hours after induction of pancreatitis under terminal anaesthesia with halothane. Immediately prior to sacrifice (under anaesthesia) a laparotomy was performed to assess for evidence of peri-pancreatic haemorrhage. Death was confirmed by exsanguination. Blood samples were collected immediately after sacrifice by cardiac puncture for biochemical and haematological analysis. Pancreata and lungs were excised immediately. The head of the pancreas and apex of the lung were buffered in 4% formalin at 4oC for 24 hours prior to haematoxylin-and-eosin (H&E) staining.

Bronchoalveolar lavage of the right lung was performed with 2 mL saline containing 0.07 mol/L ethylenediamine tetra-acetic acid. The procedure was repeated three times to produce a combined lavage of approximately 4 mL which was centrifuged at 1,500 g for 20 min, frozen at -20oC, and subsequently assayed for protein concentration.

The study was conducted under a home office license with ethics committee approval and conformed to University of Manchester ethical guidance on animal welfare during experimentation. All animals received humane care according to the criteria outlined in the “Guide for the Care and Use of Laboratory Animals (1996)” prepared by the National Academy of Sciences. 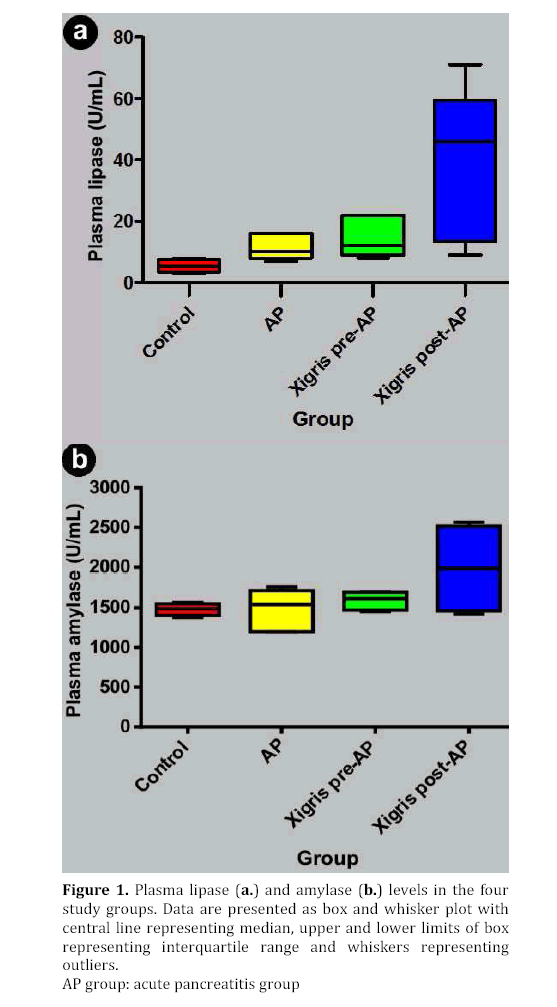 Haemoglobin levels were similar in all groups. (P=0.323; Kruskal-Wallis). In keeping with this, no evidence of peri-pancreatic or intra-abdominal haemorrhage was identified in any animal at laparotomy. 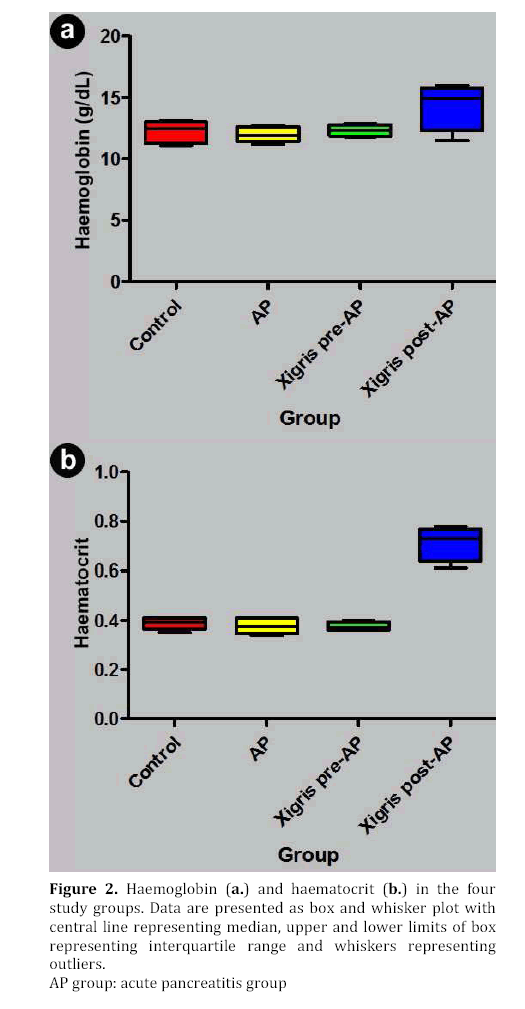 Qualitative histological assessment of lung tissue revealed no significant evidence of injury in any group.

There was no significant difference in lung BAL protein content among groups (P=0.633; Kruskal- Wallis) 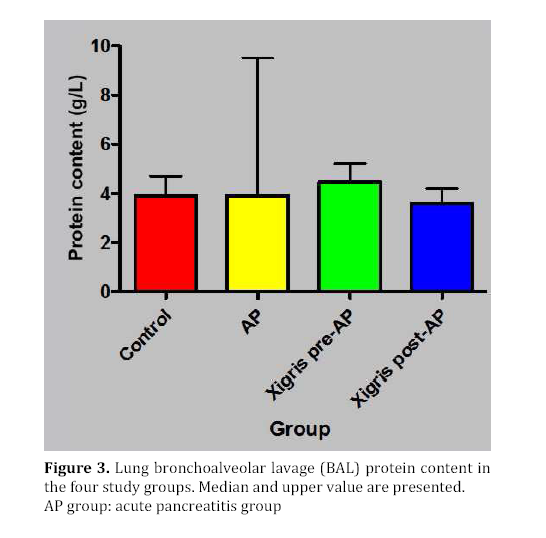 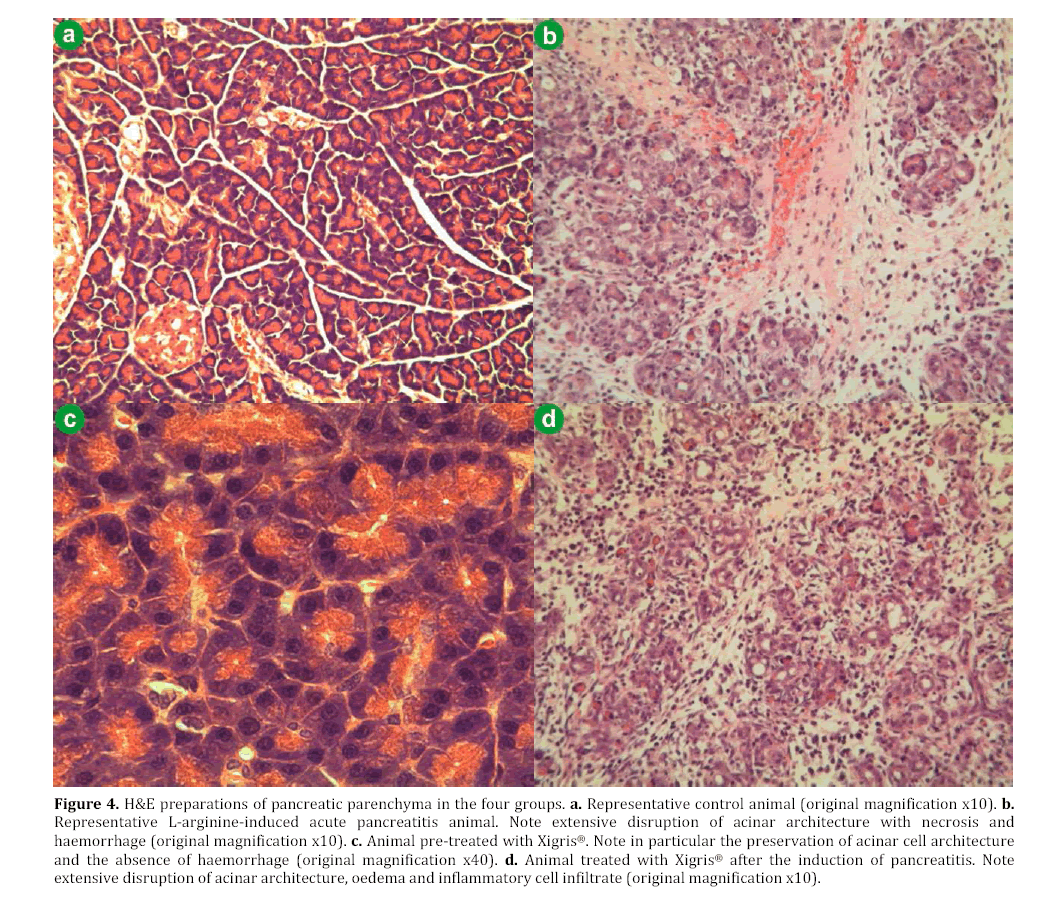 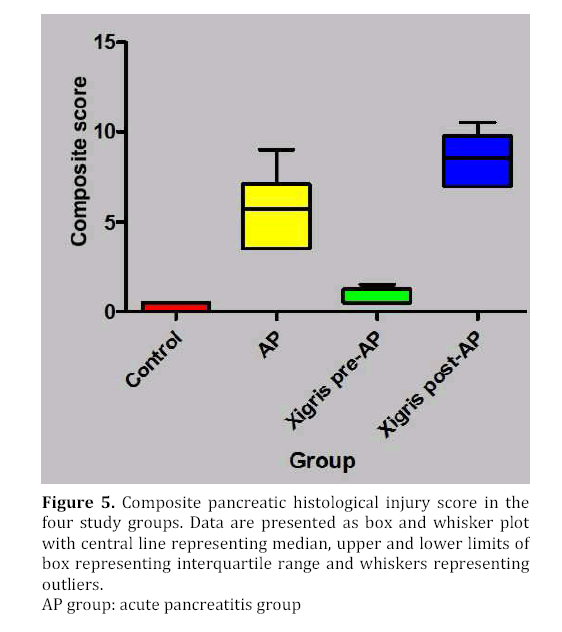 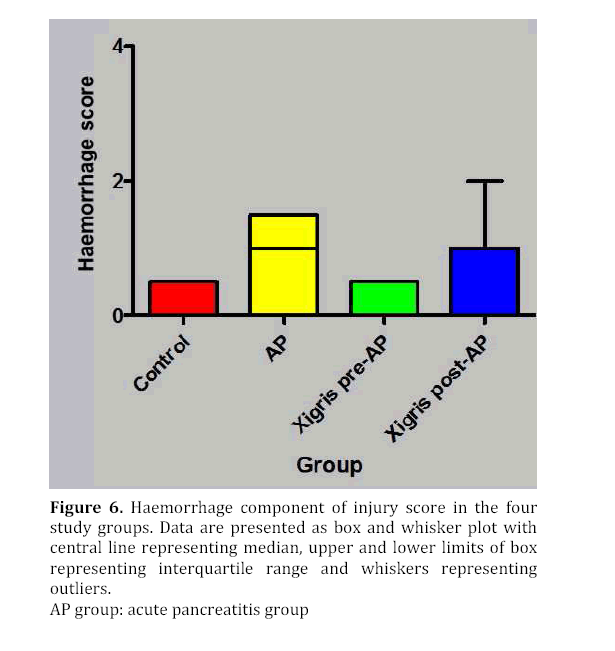 Diminished protein C generation and low levels of protein C are key features of systemic inflammation and in particular clinical severe acute pancreatitis [13]. This has led to the development of human recombinant activated protein C (Xigris®). In patients with acute pancreatitis, the disease-related risk of intra-abdominal haemorrhage has raised specific concerns about the safety of a drug with anticoagulant properties. The present study investigates whether administration of Xigris® ameliorates pancreatic injury in a well-validated experimental model of acute pancreatitis. Crucially, this study also examines whether Xigris® exacerbates pancreatic haemorrhage. The Larginine induced model of pancreatitis in the rat is, in theory, ideal for this purpose as it involves no physical manipulation of the pancreas (and therefore no iatrogenic predisposition to pancreatic haemorrhage), is associated with haemorrhagic necrosis and the rat pancreatic injury correlates well to that seen in man [11]. There is a narrow range of injury with the concentration used in this study giving rise to acute pancreatitis with necrosis but without lung injury. When higher concentrations are used, there is high lethality. This limitation of the L-arginine experimental acute pancreatitis model is now more widely recognised (Z Raconzay; personal communication) but was accepted for the present study, in particular as there was no pancreatic manipulation.

The administration of L-arginine in this study resulted in hyperlipasemia and characteristic histological features of acute pancreatitis with oedema and patchy necrosis at forty-eight hours. Amylase levels at forty-eight hours were not significantly different. This is in keeping with previous reports of this model as serum amylase has an early peak and has usually normalised by forty-eight hours [11].

An important and original finding of this work is that there was no histological evidence of exacerbation of pancreatic parenchymal haemorrhage in animals treated with Xigris® (in concentrations mirroring those used in the human sepsis treatment setting and in the context of pancreatic inflammatory injury). Equally there was no sign of intra-abdominal haemorrhage at laparotomy and in keeping with this there was no change in haemoglobin measurements in either treatment group. The rise in haematocrit in animals receiving Xigris® after induction of acute pancreatitis may be a chance finding but may also be representative of an effect of Xigris® on microvascular permeability in the presence of endothelial injury and requires further evaluation.

The question of whether this agent can modify the complex clinical course of the human disease remains unanswered and we would caution against over-extrapolation to the clinical setting from experimental studies. To take this work forward, further experimental studies may be of benefit. Specifically, evaluation of the effect of Xigris® in another experimental model such as that associated with taurocholate could be useful (although this would involve manipulation of the pancreas) and in particular, in a model with a more representative pulmonary injury [16, 17].

We acknowledge the input of David Schofield of the Pancreatic Laboratory of the Manchester Royal Infirmary, Manchester , United Kingdom