Distal pancreatectomy is a technically complex procedure usually performed on an older population with significant comorbidities, with a perioperative mortality rate inferior to 5% in high volume centers [1], but with a high morbidity rate, ranging from 22.7% to 57% [2, 3]. How is it possible to justify this wide range? Are there really important differences between the different centers or does a common method for evaluating surgical outcome not exist? In fact, while mortality is an easily quantifiable outcome parameter, overall morbidity and its severity are only poorly defined and this has hampered comparison among the different centers and within the same institution over time. It should be pointed out that the definition and severity of the most common complications after pancreatic resection are widely accepted to be postoperative pancreatic fistula [4], postpancreatectomy hemorrhage [5] and delayed gastric emptying [6], but there is no internationally accepted grading system of all types of complications which allows a proper interpretation of the surgical outcome. In 1992, a novel approach was presented for ranking complications by severity based on the therapy used to treat the complications but it did not gain widespread acceptance [7]. The same authors revised this grading system in 2004, introducing a new five-scale classification system with the aim of presenting an objective, simple, reliable and reproducible way of reporting all complications after surgery [8]. From January 2004 to March 2009, Clavien et al. [9] reported 214 citations of this classification system, 49 of them from the hepato-pancreatico-biliary field. Nevertheless, to our knowledge, there is no study which has tested the Clavien-Dindo classification after distal pancreatectomy. Thus, the aim of our study was to test the usefulness of the Clavien-Dindo classification in patients undergoing distal pancreatectomy in clinical practice by considering the length of the hospital stay as the principal outcome indicator.

A prospective study of 61 consecutive patients who underwent distal pancreatectomy in the First Surgical Clinic of the University of Bologna, S.Orsola-Malpighi Hospital, from January 2006 to June 2010, was conducted. Demographic data (age and sex), preoperative factors (presence and number of comorbidities), operative parameters (type of distal pancreatectomy, treatment of the pancreatic stump, extension of resection), and pathological diagnosis (benign or malignant disease) were reported. The clinical course was documented for each patient and the complications were classified according to the criteria of Clavien and Dindo [7, 8] (Table 1).

No approval of institutional review committee was needed because the data of the present study were collected in the course common clinical practice and, accordingly, the signed informed consent was obtained from each patient for any surgical and clinical procedure. The study protocol conforms to the ethical guidelines of the "World Medical Association Declaration of Helsinki - Ethical Principles for Medical Research Involving Human Subjects" adopted by the 18th WMA General Assembly, Helsinki, Finland, June 1964, as revised in Tokyo 2004.

Means, standard deviations, ranges, and frequencies were used to describe the data. Box and whiskers plot showed the interquartile ranges, the medians and the extreme values. The logarithmic transformation of the hospital stay was applied before analysis because these data were not normally distributed at the Kolmogorov- Smirnov test and showed a positive skewness. Data were analyzed by means of the one-way ANOVA; the linear trend and the simple contrast were applied. The linear by linear chi squared test was applied to discrete variables. All statistical analyses were made by running SPSS for Windows (version 13.0) on a personal computer. Two-tailed P values less than 0.05 were considered statistically significant. 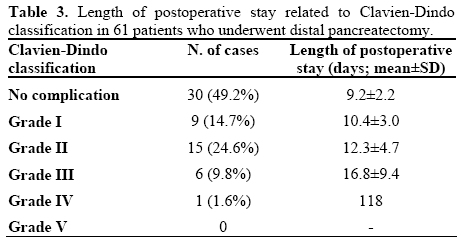 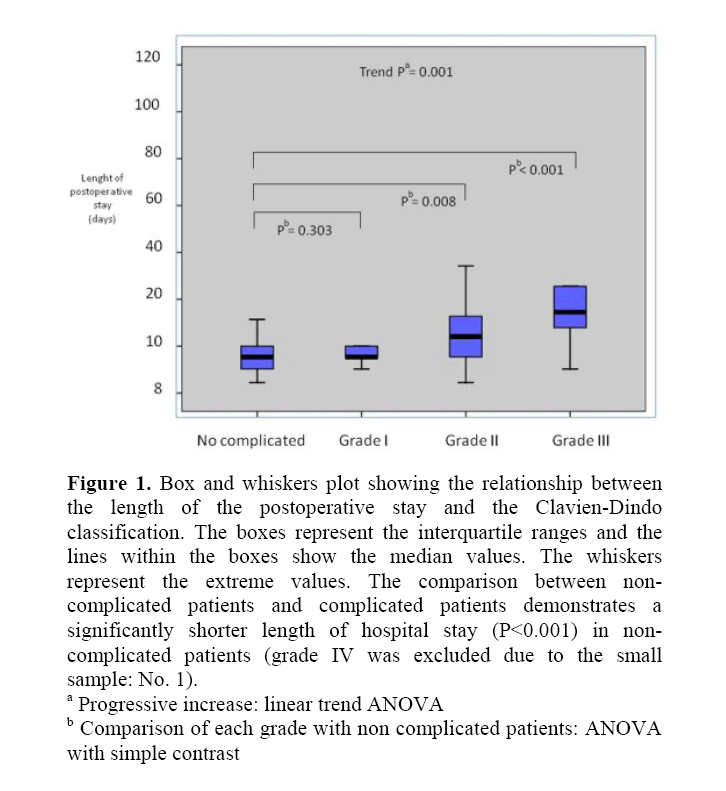 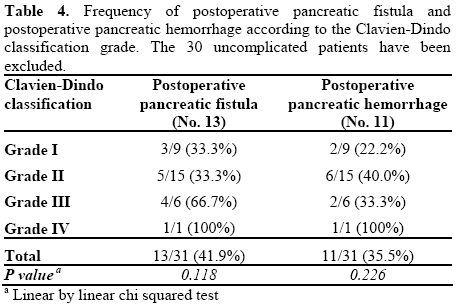 To our knowledge, this is the first prospective study evaluating the usefulness of the Clavien-Dindo classification, a grading system designed to classify postoperative course after distal pancreatectomy according to the treatment used for complications. In this classification, grades I and II include only a minor deviation from the normal postoperative course which can be treated with drugs, blood transfusions, physiotherapy and nutrition, while grades III and IV require surgical, endoscopic or radiologic intervention, and intermediate care or ICU management [7, 8, 9].

This grading system was objective and simple because the data recorded in our database were easily converted into this new classification. First, we noted that using this system, the rate of patients with any deviation from the normal postoperative course was very high (50.8%); only 49.2% of the patients had an uneventful postoperative course. In the literature, the lack of a stratified grading system for complications after surgery has not allowed proper evaluation of the surgical outcome. Probably, for this reason, the overall postoperative morbidity rate after a distal pancreatectomy was reported as lower and had a wide range [1, 2, 3]. Some authors have recently reported an overall morbidity rate after distal pancreatectomy using the Clavien-Dindo classification [3, 10]; Yoshioka et al. [3] recognized an overall morbidity rate of 65% of which 61% were grades I-II whereas only 4% were grades III-IV; Seeliger et al. [10] had an overall morbidity rate of 56.4% of which 32.7% were grades III and 18.2% were grades III-IV.

Patients with a normal postoperative course (i.e. those with no complications) had a significantly shorter hospital stay than patients defined as complicated in the Clavien-Dindo grading system. Thus, in our opinion, this grading system seems to be useful in recognizing a normal postoperative course from a complicated one; nevertheless, patients with no complications and patients with grade I are similar because grade I did not include particular pharmacologic treatment but only wound infections which opened at bedside. The length of the hospital stay significantly increased for grades II-III, demonstrating that the Clavien-Dindo classification is a useful tool for distinguishing among the increased grade of severity of the complications. Moreover, this result suggests that patients undergoing interventional treatment had a greater clinical impact on the length of hospital stay than patients who needed only medical treatment.

Regarding the relationship between the Clavien-Dindo classification and the most important complications after distal pancreatectomy, first of all, it should be pointed out that postoperative pancreatic fistulas A are sometimes not included in the complicated cases of the Clavien-Dindo grading system. This is probably due to the fact that, for the most part, postoperative pancreatic fistulas A do not have a clinical impact and they do not require any treatment. Moreover, patients with grades I or II did not have major complications in approximately 50% of the cases while, in grades III and IV, there were always major complications. Thus, the Clavien-Dindo classification appropriately selected those patients requiring additional surgical, radiologic or endoscopic intervention; in fact, the severity of both postoperative pancreatic fistula and postpancreatectomy hemorrhage was positively related with the severity of the Clavien-Dindo classification.

In conclusion, the Clavien-Dindo classification represents an objective and simple, way of reporting all complications in patients undergoing distal pancreatectomy. This classification system allows us to distinguish a normal postoperative course from any deviation and it satisfactorily distinguishes the severity of complications. Finally, according to our experience, this classification system seems to be of particular interest in comparing the various complications between different pancreatic surgical centers. However a definite statement on the clinical value is not yet possible due to the small case number, but the promising results should encourage further evaluation in larger cohort with the goal to possibly establish a standard classification.