Context Perivascular epithelial cell tumors (PEComas) are a family of rare mesenchymal neoplasms which share cellular, immunohistochemical and ultrastructural characteristics but are found in different visceral and soft tissue sites. PEComas of the pancreas are extremely rare neoplasms. Case report We describe a 49-year-old male who was incidentally diagnosed with a pancreatic mass. Endoscopic ultrasound-guided biopsy suggested a PEComa. An uneventful pylorus-preserving pancreaticoduodenectomy was thus performed. The tumor was a solid well-circumscribed mass in the pancreatic head with dilatation of the main pancreatic duct. Histopathology revealed a well-circumscribed and vascularized neoplasm, measuring 32x27x30 mm, composed of epithelioid smooth muscle cells with clear cytoplasm rich in glycogen. The tumor exhibited immunoreactivity to alphasmooth muscle actin and to melanoma-associated antigen HMB-45. Conclusions Although rare, pancreatic PEComas should be included in the differential diagnosis of a pancreatic mass. Currently, the paucity of cases published makes it impossible to predict the behavior and prognosis of these tumors or to advocate an optimal therapy.

Perivascular epithelial cell tumors (PEComas) are a family of rare mesenchymal neoplasms which share cellular characteristics but are found in different visceral and soft tissue sites [1]. Angiomyolipoma, lymphangiomyomatosis and clear cell ‘sugar’ tumors are included in the PEComa family [2]. These tumors all share a distinctive cell type, the perivascular epithelial cell, which, as yet, has no known normal cellular counterpart. These tumors exhibit immunoreactivity for both melanocytic and myogenic markers and share ultrastructural distinctive features. PEComas have been described in different organs (“ubiquitous tumors”) [3] but are most commonly found in visceral, retroperitoneal or abdominopelvic sites. The gastrointestinal tract and uterus are the most common organs outside the kidney, while a smaller subset may be found in the somatic soft tissues and the skin [1].

PEComas show a marked female predominance. Very few reports of clear cell ‘sugar’ tumors have been associated with tuberous sclerosis complex, unlike angiomyolipomas and lymphangiomyomatosis. Although slow growing, a subset of PEComas behaves in a malignant fashion, stressing the importance of early diagnosis and management [1, 3].

Pancreatic PEComas are exceedingly rare neoplasms and were first reported in 1996 by Zamboni et al. [4]. To the best of our knowledge, we report the 7th case of perivascular epithelial cell tumors [4, 5, 6, 7, 8, 9], and the very first case in a male patient (Table 1).

A 49-year-old male presented to his primary care physician in July 2009 with nonspecific symptoms of fever, cough and malaise. The patient denied any abdominal or back pain, loss of weight, loss of appetite or jaundice. A chest X-ray raised the suspicion of a lung mass and a computed tomography scan (CT) of the chest and abdomen revealed a mass with calcifications, measuring 30x40 mm, in the head of the pancreas. Past medical history was positive for hypothyroidism, hiatal hernia, hypertension, hyperlipidemia, and Hodgkin’s lymphoma grade IIIa in remission since 1993. The patient denied any history of tuberous sclerosis and his family history was positive for maternal uterine carcinoma.

An endoscopic ultrasound (EUS) identified a welldemarcated, hyperechoic, calcified mass at the head of the pancreas, measuring 25x35 mm. The mass compressed the common bile duct without proximal bile duct dilatation. Proximal stenosis and distal dilatation of the main pancreatic duct were also noted. There was no evidence of vascular invasion or lymphadenopathy. EUS-guided fine needle aspiration suggested a ‘sugar tumor of the pancreas’. Four months after his initial presentation, a repeat CT revealed an increase in the mass size to 38x40 mm with no evidence of distant metastasis, but the mass was now compressing the second part of the duodenum. Laboratory values, including tumor markers, were all within normal limits.

As a result of the continuous growth of the tumor in such a short period of time, the loco-regional pressure effect, and insufficient knowledge of the prognosis of a PEComa of the pancreas, an elective pyloruspreserving pancreaticoduodenectomy was performed. The tumor was a solid well-circumscribed mass at the head of the pancreas causing dilatation of the main pancreatic and common hepatic ducts. The rest of the pancreas contained no additional masses and was normal on palpation. Neither vascular invasion, infiltrating growth into the surrounding soft tissue, abdominal and pelvic lesions, nor nodal enlargement were demonstrated. Frozen sections from the pancreas and the common hepatic duct were used to confirm clear surgical margins. The operative and postoperative courses were uneventful except for a surgical site infection.

Pathological analysis of the specimens revealed a wellcircumscribed vascularized neoplasm, measuring 32x27x30 mm, composed of epithelioid smooth muscle cells with clear cytoplasm rich in glycogen (Figure 1). The tumor exhibited immunoreactivity to alpha-smooth muscle actin (Figure 2) and to melanoma-associated antigen HMB-45 (Figure 3), but not to the epithelial marker, cytokeratin. The tumor displayed high nuclear pleomorphism but no mitotic figures were seen in 50 high power fields (HPF) and the proliferative index Mib1 (Ki67) was less than 1%. No tumor was detected at the surgical margins or in the 14 regional lymph nodes resected. 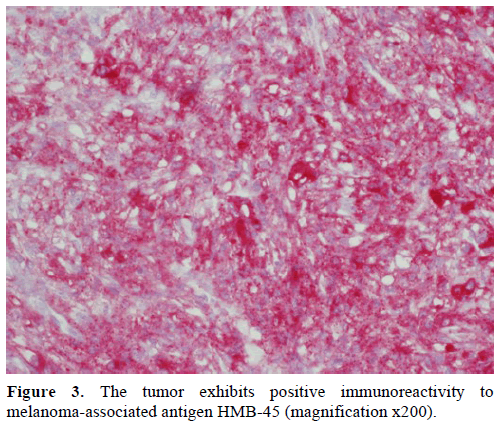 At the ten-month follow-up, there was no evidence of tumor recurrence or metastases.

PEComas are well-circumscribed and set apart from the surrounding parenchyma by a thin capsule [1, 3, 5]. Histopathological examination of PEComas reveals nests and sheets of usually epithelioid but occasionally spindled cells with clear to granular eosinophilic cytoplasm, often found in close association with the blood vessel walls. The tumors demonstrate immunoreactivity for both melanocytic (HMB-45, melan-A, microphthalmia transcription factor) and smooth muscle (actin and/or desmin) markers [1, 3, 10]. The term “sugar tumors” refers to the clear cytoplasm of the perivascular epithelioid cells which is rich in glycogen [4].

For the most part, PEComas are considered benign; however, a subset of PEComas behaves in a malignant fashion [1], leading to local invasion, multiple metastases and death as observed with high-grade sarcomas [3]. Thus, malignant PEComas mandate early diagnosis and an aggressive surgical approach.

Pancreatic PEComas are exceedingly rare neoplasms and to the best of our knowledge, we report the 7th case of a PEComa of the pancreas in the literature (Table 1). All the patients, aside from ours, were females and their diagnosis followed complaints of abdominal pain, diarrhea or a bulge in the right upper quadrant. We describe the first case of a male patient in whom the pancreatic lesion was discovered incidentally during an abdominal CT scan, with no abdominal symptoms, signs or abnormal laboratory findings.

PEComas should be considered in the preoperative differential diagnoses of a pancreatic mass, although mesenchymal pancreatic tumors, such as PEComas, constitute the rarest type of pancreatic solid neoplasms. These tumors should be considered if a pancreatic mass does not fit into one of the more common categories of pancreatic lesions. On CT scan, most lesions appear as round, solid, well-circumscribed and homogenous masses. Characteristic histology and immunoreactivity for both melanocytic and myogenic markers support the preoperative diagnosis of PEComa.

Because of the paucity of pancreatic PEComas, much uncertainty remains regarding the prognosis of these tumors. In 2005, Folpe et al. reported that recurrence and/or metastases in PEComas of soft tissue and gynecologic origin are strongly associated with a tumor size greater than 8 cm, mitotic activity greater than 1/50 HPF and the presence of necrosis [13]. Accordingly, Folpe et al. also proposed criteria for the classification of PEComas of soft tissue and gynecologic origin as “benign”, “of uncertain malignant potential” and “malignant”. This group observed an association between a tumor size greater than 5 cm, an infiltrative growth pattern, a high nuclear grade, necrosis and mitotic activity greater than 1/50 HPF, and the subsequent aggressive clinical behavior of the tumors [13]. Small PEComas without any worrisome histologic features are most likely “benign”. PEComas with only nuclear pleomorphism and large PEComas without other worrisome features have “uncertain malignant potential”. PEComas with two or more worrisome histologic features should be considered “malignant”. Among the patients with pancreatic PEComas, there were no cases of metastases, recurrence or tumor-related death. By this classification, the present case qualifies as an “of uncertain malignant potential” tumor. However, this classification may not be suitable in this case because, among the 26 cases that were used to determine this classification, no pancreatic PEComas were included. A larger cohort with a long and systematic follow-up is needed to verify the usefulness of Folpe’s classification.

No therapeutic trial has been implemented in order to decide on the optimal treatment of PEComas and the literature offers limited information regarding the need and timing of resection. Surgery seems to be the only approach for aggressive cases as chemotherapy and radiotherapy have not shown positive results in anecdotal cases. The present case describes a rather large but well-circumscribed mass with no evidence of vascular invasion or nodal involvement. Nevertheless, a pylorus-preserving pancreaticoduodenectomy was preformed mainly because of the size and dilation of the main pancreatic and common bile ducts.

The case described is unusual since the incidental finding of a PEComa of the pancreas, particularly in a male has never been described previously. Despite considerable advances in diagnosing these unusual tumors, the origin of perivascular epithelioid cells and their tumors remains obscure. Additional cases with longer follow-ups must be collected before we can predict the behavior and prognosis of these tumors and decide upon the optimal therapy required.