Atypical Toxicity Associated with 5-Fluororacil in a DPD-Deficient Patient with Pancreatic Cancer. Is Ethnicity a Risk Factor?

Context Fluoropyrimidines constitute the backbone of chemotherapy regimens for GI tumors, including pancreatic cancer where it is used either as a radiosensitizer or as second-line after failing gemcitabine. While normal dihydropyrimidine dehydrogenase (DPD) enzyme activity is rate limiting in 5- fluorouracil (5-FU) catabolism, its deficiency could increase concentrations of bioavailable 5-FU anabolic products leading to 5-FU related toxicity syndrome. The most common toxicities include myelosuppression, stomatitis, neuropathy, and diarrhea. The prevalence of this autosommal codominently inherited pharmacogenetic syndrome is approximately 3-5% in the Caucasian population and 8% in the African-American population. Case report We present here a case of an African-American patient with pancreatic cancer who developed a desquamative skin rash on the face, trunk, and forearms as the worst rash (grade 3) following 5-FU bolus that led to the investigation of DPD enzyme. Measurement of DPD activity by radioisotopic assay methods described previously revealed an abnormally low level of 0.087 nmol/min/mg protein (reference range: 0.182-0.688 nmol/min/mg protein). She was treated toxicity with intravenous steroids and antihistamine therapy. Further 5- FU therapy was discontinued. Conclusions This case suggest that the pattern of toxicities associated with 5-FU can vary, especially in patients with different ethnic backgrounds (whites versus nonwhites). These findings become of further importance as our recent study suggests that DPD deficiency may be more common among African-Americans.

although 5-fluorouracil (5-FU) is generally well tolerated at standard doses, approximately 40-60% of cancer patients that develop severe, life-threatening 5-FU toxicities are dihydropyrimidine dehydrogenase (DPD) deficient [1, 2]. Complete DPD deficiency is extremely rare, but 3-5% of all cancer patients are considered partially DPD deficient, defined by enzyme activity that is less than the 95th percentile of the lower limit of the population [3]. However, up to 43-59% of cancer patients who experienced severe to life-threatening toxicities to 5-FU are considered partially or borderline DPD deficient [4].

We report here an interesting case of pancreatic cancer who was treated with 5-FU and developed severe skin rash as the worst toxicity.

A 67-year-old African-American female with a past medical history of hypertension was evaluated for histologically-proven metastatic pancreatic adenocarcinoma. She was started on a regimen of bolus 5-FU and a uridine analog to be administered weekly times three out of four weeks. A 25% dose reduction was necessary for cycle 2 due to a development of grade 2 anemia and thrombocytopenia. After cycle 3, however, she developed grade 3 thrombocytopenia, grade 3 periortital edema, grade 1 mucositis, and a grade 3 desquamative rash over her face, trunk, and forearms (Figure 1). She was admitted to the hospital for further management of the skin toxicity with intravenous steroid and antihistamine therapy. Measurement of DPD activity by radioisotopic assay methods described previously [5, 6] revealed an abnormally low level of 0.087 nmol/min/mg protein (reference range: 0.182-0.688 nmol/min/mg protein). 5-FU therapy was consequently discontinued with resolution of skin toxicity, mucositis, and thrombocytopenia after 3 weeks. The patient was later treated with gemcitabine. 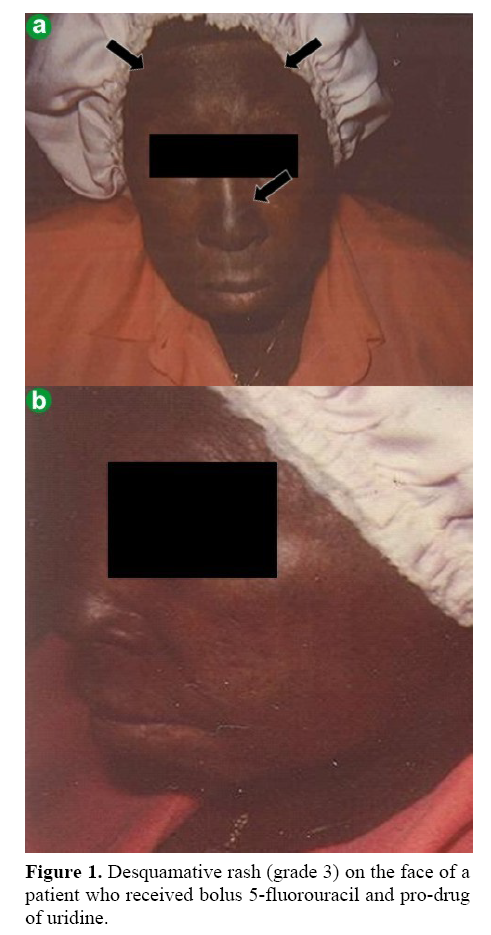 Figure 1. Desquamative rash (grade 3) on the face of a patient who received bolus 5-fluorouracil and pro-drug of uridine.

DPD deficiency is a familial syndrome as a result of the allelic mutations within the DPD gene [7]. The DPYD*2A variant is the single most common mutation associated with DPD deficiency. It is associated with a glycine to arginine mutation in the GT 5’ splicing recognition sequence of intron 14 which results in a 165-bp deletion in the DPD mRNA [8]. We have earlier demonstrated by genotype analysis of the DPYD gene that a homozygote genotype results in complete deficiency [4] while a heterozygote genotype results in partial deficiency of DPD [9].

Gender differences of DPD expression and activity have been noted. A retrospective review of past studies utilizing 5-FU have shown that women experience an average higher grade of toxicity, more grade 2 or higher hematologic toxicity and increased moderate to severe mucositis compared to men [10]. In one series, tumors and normal tissue from 118 men and women were analyzed. In the tumor tissue, the DPD expression was lower among women, but in normal tissue there was not a significant difference between the genders [11]. Thus, this may provide an explanation as to why women have more sensitivity to 5-FU treatment. Experience from our group also has indicated that women have lower DPD enzyme activity compared to men as measured by the radioassay described above, with African-American women being the most affected [12].

Our series of patients noted DPD deficiency among several racial groups. A greater understanding of pharmacogenomic differences in DPD activity among different races is developing. Retrospective data from a phase III trial of 5-FU in the adjuvant setting shows a significant decrease in severe toxicity such as diarrhea, nausea and stomatitis in African-Americans compared to Caucasians. However, among African-Americans there was an increase in overall leucopenia and anemia, but not with respect to severe myelosuppression [13]. Differences in DPD activity between these two racial groups have been noted, with African-Americans having a lower level of mean DPD activity and a 3-fold higher incidence of DPD deficiency [12]. Among other racial groups, there are variable results. In a Japanese study of 150 healthy subjects, only one patient was found to be DPD deficient with an incidence of 0.7% [14]. Interestingly, there was a non statistically significant lower level of DPD activity among the women in this study. Another analysis of germline mutations among 107 Japanese cancer patients and healthy volunteers only detected an incidence of homozygous mutations in the DPYD gene of 0.2% [15]. One of the patients in this review is of East Indian origin. While the incidence of DPD deficiency in this population is not known, it is clearly present. A prior analysis of 13 healthy subjects found partial DPD deficiency in one patient [16]. In another series of cancer patients and healthy subjects of Indian, Malay and Chinese origin in Singapore, there was a statistically significant decrease in lymphocyte DPD activity among the Chinese population (0.06 nmol/min/mg) compared to the Indian cohort (0.66 nmol/min/mg), but not when compared to the Malay group (0.31 nmol/min/mg) [17]. Overall, larger population studies in these ethnic groups are required to characterize the incidence of DPD deficiency and DPYD mutations further.

In summary, DPD deficiency is a pharmacogenetic syndrome which seems to affect African-Americans more than Caucasians which needs to be further tested in big clinical trials. In addition, a high degree of suspicion should be raised upon recognition of an uncommon toxicity, such as skin rash. DPD testing should be considered and further treatment with 5-FU should be avoided. Future epidemiological studies would be helpful to determine the prevalence of DPD deficiency among racial and ethnic groups, allowing for the optimization of 5-FU chemotherapy.