Context Diffuse serous cystadenomas of the pancreas are extremely rare, with only 8 cases reported previously, and have been associated with neuroendocrine tumors in only two patients. Some have been seen in von Hippel-Lindau disease. The management of these tumors poses a challenge due to their rarity and uncertain malignant potential. We report a case of diffuse serous cystadenoma associated with neuroendocrine carcinoma in a 35-year-old woman. Case report A 35-year-old woman with mild abdominal pain was diagnosed as having a cystic pancreatic mass on ultrasonography. On contrast-enhanced CT scan, MRI and MRCP imaging, a spongy lesion was found to replace the entire pancreas, and was diagnosed as diffuse serous cystadenoma. Serum biochemistry for amylase, lipase, CA 19-9 and CEA was normal. Screening for retinal and CNS lesions was also unremarkable. A total pancreatectomy was performed, and the patient recovered well. Histopathological examination of the specimen revealed microcysts and macrocysts replacing the entire pancreas, the largest being 3.5 cm. The cysts were lined with a single layer of cuboidal to flattened cells. An endocrine tumor abutting the cystic component was found, having neoplastic cells in a trabecular pattern. Metastasis of the neuroendocrine component was seen in the adherent lymph nodes. A diagnosis of diffuse serous cystadenoma associated with neuroendocrine carcinoma was made. Conclusion Diffuse serous cystadenomas of the pancreas are extremely rare tumors. In young patients, they may harbour associated malignancy, and may be the first presentation of von HippelLindau disease. Aggressive surgical resection with long-term follow-up may be worthwhile in this group of patients.

Cystic neoplasms of the pancreas have remained enigmatic entities, due to their relative rarity. Serous cystadenomas or microcystic adenomas of the pancreas are usually unifocal, situated in the body and tail, and multiloculated cystic in appearance. These are seen mainly in elderly women, with minimal symptoms [1, 2]. Multifocal involvement of the pancreas is extremely rare, with only 15 previously reported cases, of which 8 were diffuse adenomas [3, 4, 5, 6, 7, 8, 9, 10, 11]. Associated neuroendocrine carcinoma with diffuse or multifocal serous cystadenoma has previously been reported in only two cases [10, 12]. We present the third such case, i.e., of diffuse serous cystadenoma with a neuroendocrine tumor in a 35-year-old woman suspected of having von Hippel-Lindau syndrome. The previous literature on the subject has also been reviewed.

A 35-year-old Hindu woman from North India complained of central upper abdominal pain, anorexia and postprandial fullness of a 6-week duration. The pain was moderate, non-colicky, with no associated jaundice or weight loss. There was no previous significant personal, menstrual, past or family history. General physical and systemic examination was normal. Abdominal examination revealed an ill-defined lump in the epigastric and umbilical regions, which was fixed, firm, and slightly tender. There was no other organomegaly or ascites. Serum biochemistry including blood sugar and the serum levels of amylase, lipase, CA 19-9 and CEA were normal. The blood counts and peripheral smear were also normal. Chest X-ray was normal. Ultrasonography of the abdomen revealed the pancreas to be bulky and hypoechoic with a few cystic foci, the largest being 3 cm in diameter, projecting from its inferior margin. Contrast-enhanced CT of the abdomen revealed a diffusely enlarged pancreas with a lobulated outline and a few specks of calcification. There were multiple ill-defined, rounded, hypodense or cystic areas with thin, incomplete, enhancing walls. The fatty planes of the pancreas together with the superior mesenteric vessels, splenoportal axis and the surrounding structures were well maintained. No significant peripancreatic nodes were reported. MRI and MRCP (Figure 1) showed an enlarged pancreas. The pancreatic tissue was replaced by conglomerate cystic lesions of varying sizes and intensities, the largest measuring 4.0 cm. The pancreatic duct was not visualized. Incidentally, small cysts were seen in both kidneys and syringohydromyelia was noted in the lower thoracic cord, sparing the conus. The non-contrast CT head and fundus examinations were normal. 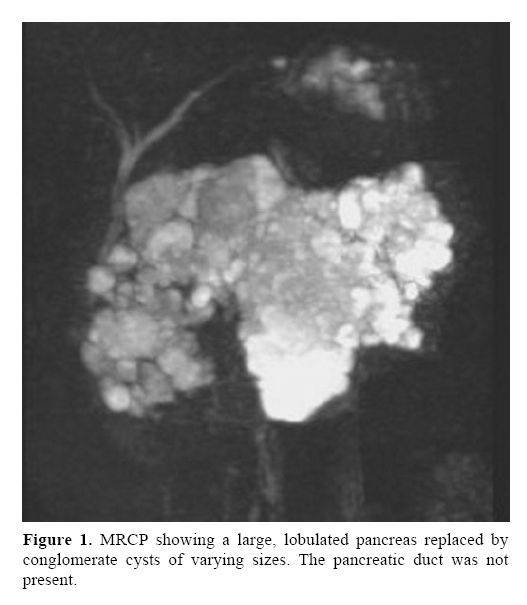 Figure 1. MRCP showing a large, lobulated pancreas replaced by conglomerate cysts of varying sizes. The pancreatic duct was not present.

A diagnosis of diffuse serous cystadenoma was made, and the patient was explored through a rooftop incision under anesthesia. Intra-operatively, we found that the entire pancreas (including the uncinate process) had been distorted and replaced by cysts of variable sizes, up to 4 cm. Remarkably, dissection was uneventful, except in a part of the uncinate process which was intimately related to the wall of the portal vein, but not invading it. A total pancreatectomy was performed, along with lymph nodal dissection up to the celiac trunk. After surgery, the patient made a speedy recovery, and was orally fed from the fifth day. Fluctuating blood glucose levels, and prolonged drainage of the ascitic fluid were managed with insulin infusion therapy, and, oral spironolactone, respectively. Her blood glucose levels are now controlled with insulin therapy and no symptoms of exocrine insufficiency are present three months after surgery. 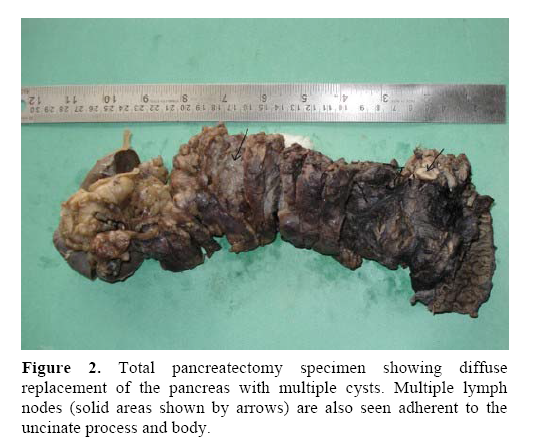 The pancreas was diffusely involved and replaced by a cystic tumor measuring 16x8x8 cm. Microcysts and macrocysts ranging between 0.1-3.5 cm, and a few sponge-like areas were noted. A few lymph nodes 0.8- 1.4 cm in diameter were also identified, adherent to the uncinate process. Histological examination showed microcysts and macrocysts lined with cuboidal to flattened epithelium. The cells showed minimal pleomorphism with clear to eosinophilic cytoplasm, uniform round nuclei, fine granular chromatin and inconspicuous nucleoli. A single focus (less than 0.5 cm) in the pancreatic head showed an endocrine tumor, with cells arranged in a trabecular and acinar pattern. These cells had abundant granular eosinophilic cytoplasm, round nuclei and speckled chromatin. The lymph nodes adherent to the uncinate process showed features of metastatic endocrine carcinoma. A few foci showing a moderate degree of pleomorphism, cellular enlargement, nuclear hyperchromasia and intranuclear pseudoinclusions were also noted. No mitosis or necrosis was seen. A histopathological diagnosis of diffuse serous cystadenoma associated with a pancreatic endocrine carcinoma was made.

Traditionally, serous cystadenomas have been regarded as essentially benign tumors as compared to the more common mucinous cystadenoma. Unifocal, small (less than, or equal to, 4 cm) serous cystadenomas have been managed expectantly with good results [13, 14, 15]. But recommendations are far from uniform, and serous cystadenomas have been shown to undergo malignant transformation. Many centers are skeptical about using clinical and imaging criteria (age, symptoms and cyst size) to determine tumor behavior. They therefore argue for a more aggressive approach to these tumors and cystic pancreatic neoplasms in general [2, 16]. In diffuse serous cystadenomas, it is impossible to draw conclusions due to their extreme rarity, although most surgeons would find it prudent to operate on large or symptomatic tumors. In our patient, the presence of symptoms, involvement of the entire pancreas resulting in huge enlargement and pathological curiosity were the factors favoring surgical management. A preoperative tissue diagnosis for resectable tumors did not aid in changing the management and was not attempted.

An intriguingly wide variety of pancreatic cystic lesions, from simple cysts to mucinous cystadenomas, have been reported in patients with von Hippel-Lindau syndrome. Pancreatic cysts may be the first presentation in up to 15% of von Hippel-Lindau patients (median age 25 years), and may precede central nervous system tumors by 5-7 years [17, 18]. Blandamura et al. have shown that the association of serous cystadenomas and endocrine tumors shows a lower mean age of incidence than when each tumor is considered individually. This was especially true for the mixed tumors (serous cystadenoma with endocrine tumor) seen in von Hippel-Lindau patients (20% of all mixed tumors, mean age 35 years) [12]. Our patient was 35 years old, and had syringohydromyelia and renal cysts on imaging. These factors led us to suspect von Hippel-Lindau syndrome and to screen for retinal, CNS, and other visceral abnormalities. With the present clinical and investigative data, she cannot be labeled as having von Hippel-Lindau syndrome, but close surveillance will be necessary.

Preoperative diagnosis of serous cystadenoma has improved with the use of MRI which is used often complementarily to CECT of the abdomen [2, 19]. Accuracy increases from 54 to 74% when compared to a CT scan alone in diagnosing serous cystadenoma [2]. Tumor size, growth rate, and planes of separation with surrounding organs have been variously used to determine its invasiveness [2, 14, 19]. Leonard et al. have reported the successful follow-up of a multifocal serous cystadenoma using MRI over a period of three years [19].

The association of other neoplasms with pancreatic serous cystadenomas has been seen earlier [9, 10, 11, 12]. These admixed tumors were usually neuroendocrine in origin, although one patient had ductal adenocarcinoma. Only two patients have previously been reported to have a mixed tumor with a diffuse or multifocal serous cystadenoma component and a neuroendocrine carcinoma component [10, 12]. One of these patients was a 67-year-old woman who presented with melena and underwent near-total pancreatectomy for suspected pancreatic cancer. The endocrine tumor was considered malignant due to duodenal invasion and lymphatic emboli [10]. The second case was a 31-year-old woman with von Hippel-Lindau disease, and associated renal and CNS tumors. Here too, the endocrine component was seen to invade the duodenum [12]. To the best of our knowledge, the patient we operated on is probably only the third such case. Endocrine tumors are usually regarded as potentially malignant as their behavior is difficult to predict from their histopathological features or their cellular products. Local vascular or lymphatic invasion or metastasis is essential for diagnosing malignancy. In our case, we observed metastasis of the neuroendocrine tumor to the lymph nodes adherent to the uncinate process.

A few authors have suggested that diffuse serous cystadenoma is a type of ‘polycystic’ pancreas, akin to polycystic disease of the liver and kidney [3, 11]. The similarities stem from the bland architecture of the lesions, and non-communicating cysts of different sizes compressing the surrounding benign pancreatic stroma. The histogenesis of mixed tumors within the pancreas (serous cystadenoma and neuroendocrine tumor) is a matter of debate. One hypothesis suggests a common ductular/centroacinar origin of both components, followed by biphasic differentiation of the cell lines. Another theory visualizes simultaneous neoplastic change in two different cell types [12, 20]. Although the former seems more plausible, analysis of a larger number of cases is needed for verification.