Impairment in both pancreatic endocrine and exocrine function has been reported in diabetes mellitus [1, 2, 3, 4, 5]. Histological analysis has demonstrated that patients with type 1 diabetes frequently have lymphocytic infiltration in the exocrine as well as in the endocrine pancreas [6]. Lymphocytic infiltration in the exocrine and the endocrine pancreas has also been reported in patients with autoimmune pancreatitis [7] which is a subtype of non-alcoholic chronic pancreatitis and is frequently associated with diabetes [8, 9]. Furthermore, in Japanese patients with autoimmune pancreatitis and type 1 diabetes, it has been reported that there is the presence of autoantibodies against exocrine pancreatic antigens (i.e., autoantibodies against cytokeratin, carbonic anhydrase II (CAIIAb) and lactoferrin (LACAb)) [9, 10, 11]. These findings suggest that a common autoimmunemediated mechanism involves the exocrine as well as the endocrine pancreas in type 1 diabetes and non-alcoholic chronic pancreatitis.

However, the presence of these autoantibodies against exocrine pancreatic antigens is still not clear in Caucasian populations. In this study, we examined the existence of CAIIAb and LACAb in European Caucasian patients with type 1 diabetes and non-alcoholic chronic pancreatitis, and compared it to controls.

One hundred and thirty-six European Caucasian subjects were studied

This group was made up of 48 newly diagnosed patients (male/female: 25/23; mean age: 12.7 years, range: 4-56 years) according to the WHO criteria [12]. All patients were ketosis-prone insulin-dependent at the onset.

This group included 48 patients (male/female: 32/16; mean age: 57.3 years, range: 21-82 years; mean duration: 18.9 months) with proven pancreatic duct changes of at least grade II according to the Cambridge classification [13] and/or a reduced exocrine function according to low (<200 μg/g) fecal elastase-1 concentrations [14]. All of them were non-alcohol users and did not have pancreatic ductal calculi

The control group included 40 subjects without diabetes, pancreatitis, or rheumatic or autoimmune thyroid diseases (male/female: 22/18, mean age: 57.4 years, range: 21-77 years). Gender (P=0.314) was not significantly different among the three groups of subjects,. Age was also not significantly different between the non-alcoholic chronic pancreatitis group and the control group (P=0.970) whereas the type 1 diabetes mellitus group was significantly younger (P=0.001) as compared to both non-alcoholic chronic pancreatitis patients and controls.

ICA was determined by indirect immunfluorescence using pancreatic tissue slides from healthy human donor blood group 0 [15]. After incubation with test sera for 75 minutes, the probes were washed and diluted with PBS buffer. After another incubation of 45 minutes, the different dilution steps were analyzed by immunofluorescence microscope. The titer was converted to Immunology of Diabetes Federation units (IDFu) using an international reference serum of 20 IDFu. Sera with more than 10 IDFu were judged as positive.

CAIIAb and LACAb were measured using enzyme-linked immunosorbent assays as previously described [9, 11]. The absorbance levels were expressed as optical density (OD) at 450 nm. In the CAIIAb assay, inter- and intra-assay coefficients of variation (CV) were 9.7% and 2.2%, respectively. In the LACAb assay, inter- and intra-assay CV were 10.8% and 4.1%, respectively. Positive results were defined as absorbance values higher than the mean + 2 SD of the control samples.

Plasma samples from the subjects were collected prospectively after informed written consent was obtained. The samples were frozen and stored at -80°C until assay

Written informed consent was obtained from each patient. The study protocol was confirmed by the ethical committee of Giessen University Hospital. It conforms to the ethical guidelines of the "World Medical Association Declaration of Helsinki - Ethical Principles for Medical Research Involving Human Subjects" adopted by the 18th WMA General Assembly, Helsinki, Finland, June 1964 as revised in Tokyo 2004 and as reflected in a priori approval by the appropriate institutional review committee.

Data are reported as mean±SD. The Mann- Whitney U and Fisher's exact tests were used to determine the differences in the titers and the prevalence of antibodies between the different subjects groups, respectively. The Spearman correlation was used to describe the relationship between the different antibodies. The Pearson chi-squared and the Mann- Whitney tests were used to compare age and gender among the three groups of subjects. The data were analyzed by means of the JMP software (version 5). Two-tailed P values of less than 0.05 were considered statistically significant.

The Absorbance Levels of CAIIAb and LACAb 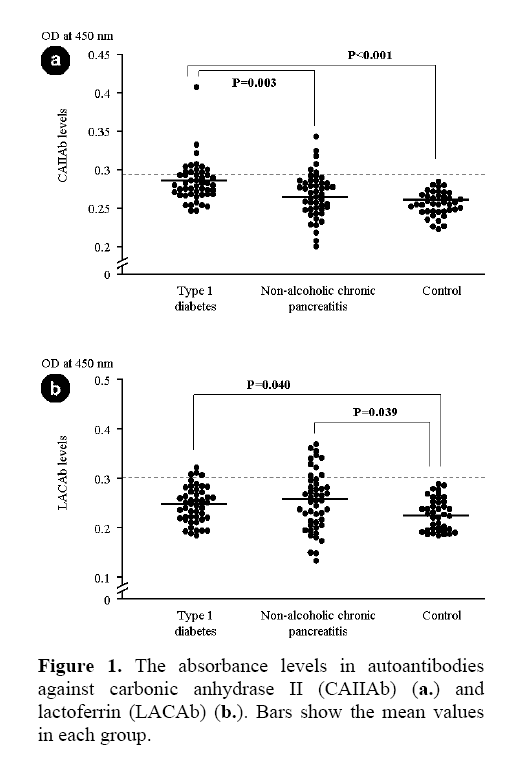 Figure 1. The absorbance levels in autoantibodies against carbonic anhydrase II (CAIIAb) (a.) and lactoferrin (LACAb) (b.). Bars show the mean values in each group. Figure 2. The association between autoantibodies against carbonic anhydrase II (CAIIAb) and lactoferrin (LACAb). a. Type 1 diabetes. b. Non-alcoholic chronic pancreatitis.

The Prevalence of Positive Findings of CAIIAb and LACAb

This immune-mediated involvement against pancreatic exocrine antigens may be an epiphenomenon secondary to damage of the exocrine pancreas and destruction of the pancreatic islets. However, this involvement of the exocrine pancreas might be related to the pathophysiology of type 1 diabetes and non-alcoholic chronic pancreatitis. Furthermore, the possibility that this autoimmunity against exocrine pancreatic tissue might be a primary cause of type 1 diabetes and non-alcoholic chronic pancreatitis and that the difference of genetic and/or environmental factors in each patient determines the course of the disease thereafter cannot be ruled out.

We thank Mr. T. Hughes for his editorial assistance