Does Computed Tomography (CT) Overestimate Common-Bile-Duct Diameter in the Evaluation of Gallstone Pancreatitis?

Acute pancreatitis is an increasingly common and expensive problem. Over $2.2 billion per year is spent due to all causes of acute pancreatitis with inpatient admissions exceeding 300,000 and about 20,000 deaths yearly [1-4]. Although there are a great many uncommon and rare causes of pancreatitis [4-6], gallstones are the most common cause [4, 7], accounting for 30-50% cases worldwide.

Gallstone pancreatitis occurs as a result of stones in the common bile duct (CBD). Such stones may result in obstruction of the common channel within or just proximal to the papilla, resulting in outflow obstruction of pancreatic secretions. Although this can occur in the absence of infection, a colonized pancreaticobiliary tree that becomes obstructed by these stones may also produce a cholangitis involving the pancreas and leading to second mechanism of gallstone pancreatitis [8, 9]. In either case, the CBD is typically dilated.

Indeed, dilatation of the CBD is one of the most powerful independent predictors of choledocholithiasis [10, 11]. Because of the importance of ductal dilatation in the diagnosis of choledocholithiasis, and our anecdotal observation that imaging modalities are not always concordant for CBD dilatation, and the observed trends in the use of abdominal imaging, in particular increasing reliance on computed tomography (CT) [12, 13], we sought to compare the three most common extracorporeal imaging modalities regarding their measurement of the diameter of CBD, taking advantage of a very large singleinstitution database.

Approval from the Institutional Review Board of Saint Agnes Hospital was obtained and a cohort of patients diagnosed with gallstone pancreatitis was identified by retrospective review of a database of patients who underwent cholecystectomy from 2000 to 2013. Patients with inadequate data for analysis were excluded from the study. Patients were assigned to groups depending on whether they underwent ultrasound (US) alone, CT alone, magnetic resonance imaging (MRI) alone, both US and CT, both US and MRI, or both MRI and CT.

The diagnosis of gallstone pancreatitis was determined from the patient charts using history, physical examination findings, laboratory studies, and imaging reports, including abdominal US, CT, and MRI. CBD diameter was measured per protocol at the point of maximum diameter. Preoperative imaging studies were included if performed prior to cholecystectomy within 30 days, but typically within a few hours of each other in the emergency department.

Statistical analyses were performed with SPSS (IBM Corp, Chicago). A paired-samples T-test was used to compare measurements of CBD diameter by US, CT, and MRI. A P-value <0.05 was regarded as significant. 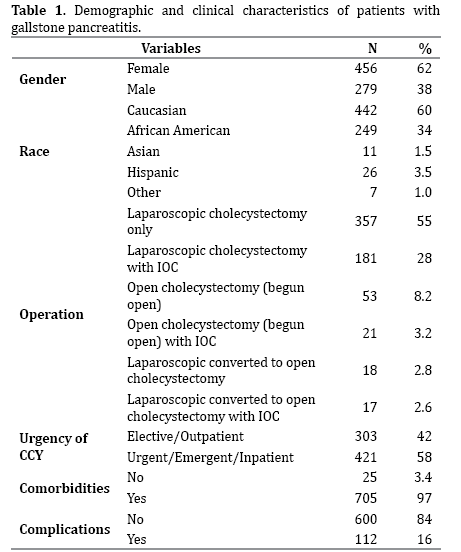 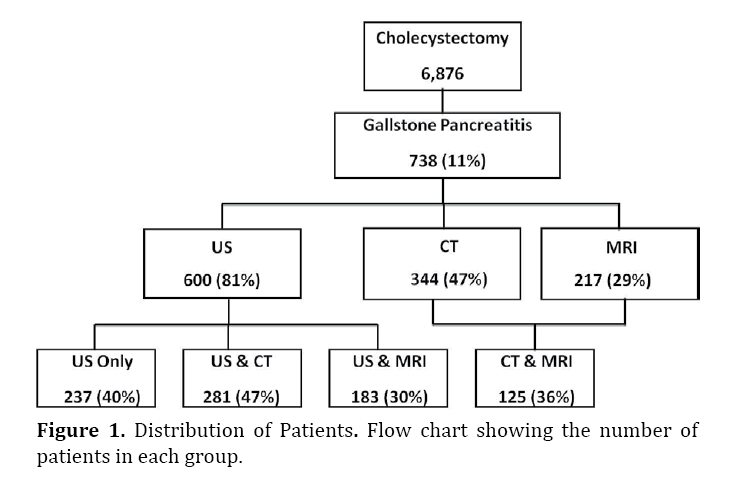 Figure 1. Distribution of Patients. Flow chart showing the number of patients in each group. Figure 2. Trends in the Use of Imaging Modalities. Percent of patients with gallstone pancreatitis undergoing any of the three imaging modalities, US, CT, or MRI, per year. Bars represent actual data. Arrows are illustrative, not statistical, but approximate the actual linear-fit lines. Figure 3. Examples of US and CT Images. For both patients, imaging by each modality was performed with measurements of the common bile duct were within 3 hours of each other.

Although the most common clinical manifestation of gallstones is biliary colic and acute cholecystitis, as many as 8% of patients with gallstones develop gallstone pancreatitis [9, 14-16]. While gallstone pancreatitis can be mild and self-limited, up to 20% of patients develop severe acute pancreatitis with high, double-digit mortality rates [17, 18]. The definitive treatment is cholecystectomy, which in mild cases is done during the same admission to prevent future recurrence [9, 19, 20], generally after endoscopic stone extraction.

One of the cornerstones of initial management, however, is diagnosing and removing the inciting factor: the choledocholithiasis, which is generally detected using a combination of elevated lipase, alkaline phosphatase, and bilirubin, and imaging findings of a dilated bile duct containing stones. Dilatation of the CBD is one of the most reliable signs of choledocholithiasis [10, 11].

CBD dilatation has traditionally been measured using US. However, the use of CT for abdominal imaging is increasing several fold over recent years, while that of US is stable or, in some groups, decreasing [12, 13]. Using the National Hospital Ambulatory Medical Care Survey from 1996 to 2007, Kocher et al. [13] found a 330% increase in the use of CT. The fact that our upward trend (Figure 2) is less steep is likely due to an expected plateauing of the trend in more recent years than those reported by Kocher et al. The increase use of CT, which in many centers is augmenting if not supplanting US, highlights the importance of our findings.

The upper limit of normal for the diameter of the CBD is controversial [21]. A common guideline for adult patients is one millimeter per decade of life, although some recent studies have shown that the commonly observed age-related normal increase in CBD diameter is smaller: approximately 0.2 mm per decade of life [22, 23]. Following cholecystectomy, however, CBD diameter may be 10 mm without obstruction. Regardless of the normal cutoff, the same patient repeatedly imaged within a few hours (such as those patients shown in Figure 2), would be expected to have consistent findings. Yet, we have anecdotally observed that this was sometimes not the case. Therefore we designed this simple study to compare the three most common imaging modalities, US, CT, and MRI, as they were interpreted in practice, within each patient experience.

Interestingly, our suspicion was justified in that CT measurements of the CBD were significantly greater than those obtained by US (Table 2), and were also greater, though only marginally significant, than MRI measurements, whereas MRI and US measurements were very similar. To be sure that we were not simply witnessing an artificial effect whereby patients get the increasingly common CT, then pass a stone, and then get an US, we isolated cases where the US was done first, followed by the CT, and still the CT-measured diameter was larger within individual patients. This suggests that the passage of stones does not explain our findings.

This discrepancy in diameter of CBD may be due to various factors. First, it could be due to measuring the CBD in different locations along the duct, depending on the imaging modality. In general, the practice in our institution is to measure the CBD at the point of maximal diameter for all three modalities. A second possibility is that contrast agents used at the time if CT have a choleretic effect that temporarily increases bile secretion. This effect certainly used to be significant, and increases of up to 4 mm have been observed after the administration of hepatotropic contrast agents [24]. However, this is unlikely relevant in our series, since the most common contrast agents during the study period (iohexol [Omnipaque™], iodixanol [Visipaque™], iopamidol [Isovue®], and Iopromide [Ultravist®]) are not strongly hepatotropic. A third possibility is that US artifacts such as reverberation can cause ducts to appear smaller than they actually are [24]. A fourth explanation is that the true duct size did actually change between studies, such that both US and CT were accurate and precise reflections of CBD diameter. Indeed, case reports have documented fluctuations of up to 13 mm, for example in a patient who passed a stone while in the emergency room [25]. However, as discussed above, this explanation is unlikely in our study, since in the vast majority of patients (70%), US was obtained prior to CT, such that if a passed stone explained the difference then the second study, the CT, should show a smaller CBD than the US, not vice versa.

Although there are many studies comparing various imaging modalities in their ability to detect choledocholithiasis [23, 26-29], we believe that this is the first study to focus on the comparison of bile-duct diameter per se in patients with gallstone pancreatitis. In a study focusing on elderly patients with acute cholecystitis, McGillicuddy, et al. [30] did compare CT and US findings and, in concordance with our study, found in the subgroup of patients undergoing both CT and US, the diameter of the CBD measured by CT was significantly larger than that measured by US (11.2 mm versus 8.7 mm, respectively). Similarly, Prpic et al. studying CBD diameter in healthy individuals, agreed with our finding that the diameter of bile ducts as measured by MRI highly correlated with US measurements [23].

Limitations of the study include its retrospective design. Data acquisition in such studies is imperfect. In addition, all the images were not reviewed and reported by the same radiologists. Although at first glance this appears to be a limitation, since the same highly experienced radiologists doing all the measurements would probably afford greater degree of standardization, nevertheless we wanted to capture the "real-world" phenomena, and therefore intentionally used exclusively the radiology reports as obtained at the time of patient presentation. We also recognize the paucity of paired CBD measurements available for analysis (Table 2 vs. Figure 1), but again, this is the nature of a retrospective chart review.

Although the diameter of CBD measured by US in the setting of acute gallstone pancreatitis was similar to the size measured by MRI, CBD diameter measured by CT was significantly greater than those measured by MRI and US, and should therefore be interpreted with caution.