Department of Nutrition, School of Medicine, The University of Tokushima. Tokushima City, Japan

Objective To clarify the regulation of protein kinase C on glucose-mediated insulin secretion.

Main outcome measures We examined the effect of protein kinase C on the cytosolic free Ca2+ concentration ([Ca2+]i) and the activity of Ca2+-activated K+ channels (KCa-channel) in the insulinoma cell line, HIT-T15.

Conclusions These results indicate that the activation of protein kinase C is involved in the glucose-induced release of insulin by modulating K+ channel function in HIT-T15 cells.

The physiological secretagogue, glucose, causes insulin to be released by pancreatic beta cells through a complex mechanism. This process involves the closure of ATP-sensitive K+ (KATP) channels [1], which are directly blocked by intracellular ATP [2], membrane depolarization [3], the opening of voltagegated L-type Ca2+ channels, and a subsequent increase in the cytosolic Ca2+ concentration ([Ca2+]i) [4]. Thus, the closure of KATP channels is regarded as a prerequisite for the glucose-induced insulin release. Sulfonylureas, used in the treatment of diabetes mellitus, have been shown to specifically block the KATP channel [5], thus inducing cell membrane depolarization and insulin secretion. The opposite has been found for the hyperglycemic drug diazoxide, a compound which opens KATP channels, hyperpolarizes the beta cells and inhibits the glucose-induced release of insulin in rat islets [6].

Several reports have shown that glucose can cause the beta-cells to release insulin without altering the cell’s membrane potential or [Ca2+]i level [7-9]. In addition to the block of the KATP channels, insulin release is regulated by a variety of intracellular processes, including changes in intracellular levels of cyclic nucleotides and phosphoinositide turnover. The latter process is mediated by the activation of phospholipase C, resulting in the generation of inositol 1, 4, 5 trisphoshate and diacylglycerol [10]. Whereas inositol 1, 4, 5 trisphoshate releases intracellularly bound Ca2+ [11], diacylglycerol exerts its effects through the activation of protein kinase C (PKC) [12]. The activity of this enzyme has been established in both rat [13] and mouse [14] pancreatic islets as well as in insulinproducing tumor cells [15, 16]. In HIT-T15 cells, Deeney et al. [17] reported that glucose caused translocation of PKC from the cytoplasm to the plasma membrane. Several types of ion channels have also been shown to be modulated by the activation of PKC [18]. For example, phorbol esters and synthetic diacylglycerol, which activate PKC, reportedly block K+ currents [19]. In addition to KATP channels, several other K+ channels were characterized in cultured pancreatic islet cells [20]. However, it is unclear how the individual K+ channel currents are affected by PKC in pancreatic beta cells. Therefore, we attempted to examine the effects of PKC on glucoseinduced insulin secretion via KCa channels by using a PKC inhibitor, staurosporine, in insulinoma HIT-T15 cells.

HIT cells were plated into 24-well tissue culture dishes (1 to 10 x 105 cells/well). Prior to any analysis, the plates were rinsed with Tyrode’s solution. This solution contained 128 mmol/L NaCl, 2.68 mmol/L KCl, 1.8 mmol/L CaCl2, 1.64 mmol/L MgCl2 and 10 mmol/L MOPS (3-[N-morpholinol] propanesulfonic acid), pH 7.2. Subsequently, the plates were incubated with test reagents diluted in the same buffer for 60 min. The samples were then collected and frozen at -20 °C. Insulin was measured by radioimmunoassay with commercially available kits according to the manufacturer’s specifications (Waco, Tokyo, Japan).

The [Ca2+]i levels were studied by using the fluorescent dye fura-2AM (Waco, Tokyo, Japan). Cells were cultured on glass coverslips three days before the experiments. At the time of analysis, these cells were immersed in Tyrode’s solution containing 4 mmol/L fura- 2AM for 30 min at 37 °C. The cells were then transferred to a small incubation bath (0.5 mL) that had been mounted on a microscope stage. The bath temperature was maintained at 37 °C while being perfused with buffer at a rate of 0.8 mL/min during the experimental period. Any fluorescence emitted was measured in the HIT cells on the coverslips by using a fluorescence spectromicroscope (excitation, 340/380 nm, emission, 510 nm). The results were expressed as a ratio of the fluorescence recorded at 340 nm and 380 nm.

Membrane currents were recorded in the "cellattached" and "inside-out" configurations by employing a patch-clamp amplifier as described by Hamill et al. [21]. The bath solution for the cell-attached mode contained 140 mmol/L KCl, 10 mmol/L MOPS-K, and 1 mmol/L CaCl2. The pipette solution was the same as the cell-attached solution except for the Ca2+ concentration (CaCl2 10-7 mol/L). Soft glass pipettes, prepared in an electrode puller (PP-83, Narishige, Tokyo, Japan), were used after being coated with Sylgard. The electrical resistance of the patch pipette was 5 to 7 MW for single channel recording. Experiments were conducted at a solution temperature between 35 and 37 °C. Data were stored in a PCM recorder (model PCM- 501ES, Sony Co., Tokyo, Japan) with a low pass filter (3 KHz). The pClamp Ver 6.0 software (Axon Instruments Inc., Foster City, USA) was used to analyze the data on single channel currents. The open probability (NPo) was determined from current amplitude histograms and was calculated by using the following equation:

where N is the number of channels in the patch and Pn is the integrated channel opening.

Data are expressed as mean±SD. Differences among data sets were evaluated by the Student’s t-test. A level of P<0.05 was accepted as statistically significant. 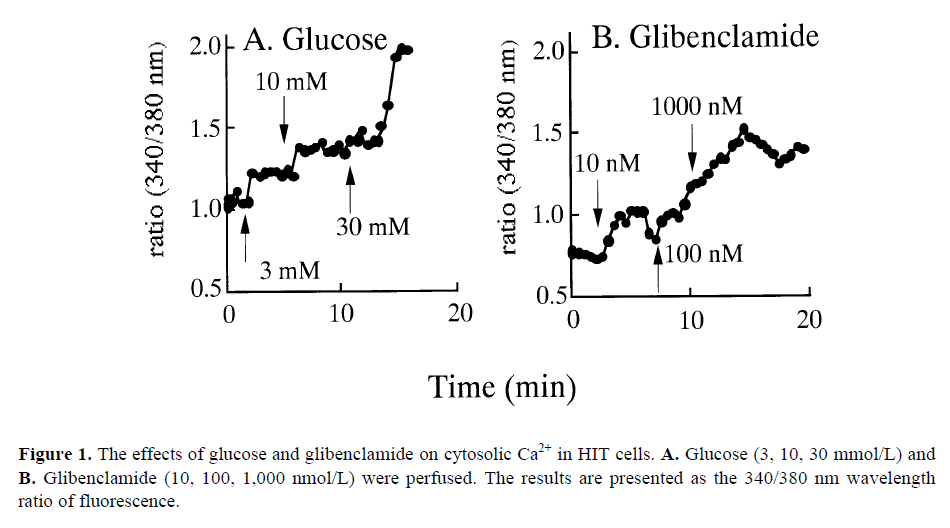 To investigate whether the decrease in insulin secretion and [Ca2+]i levels caused by staurosporine were related to the activity of the K+ channels, we studied single channel K+ currents using patch clamp technique. Figure 3A shows the effect of glibenclamide on KATP (channels that had a conductance of 51±13 pS), (n=9, Figure 3A) and KCa channels (223±35 pS), (n=7, Figure 3B). Glibenclamide (100 nmol/L) blocked KATP channel (Figure 3A), but had no effect of KCa channel (Figure 3B). The open probability of the KATP channel was decreased from 0.154±0.088 to 0.014±0.025 (P<0.05, n=6). Figure 3C shows the effect of 10 mmol/L glucose on K+ channel currents in the cell-attached configurations, using symmetrical 150 mmol/L K+, without glucose and at a membrane potential of +40 mV. Glucose blocked the KATP channel and KCa channel almost completely (Figure 3C). 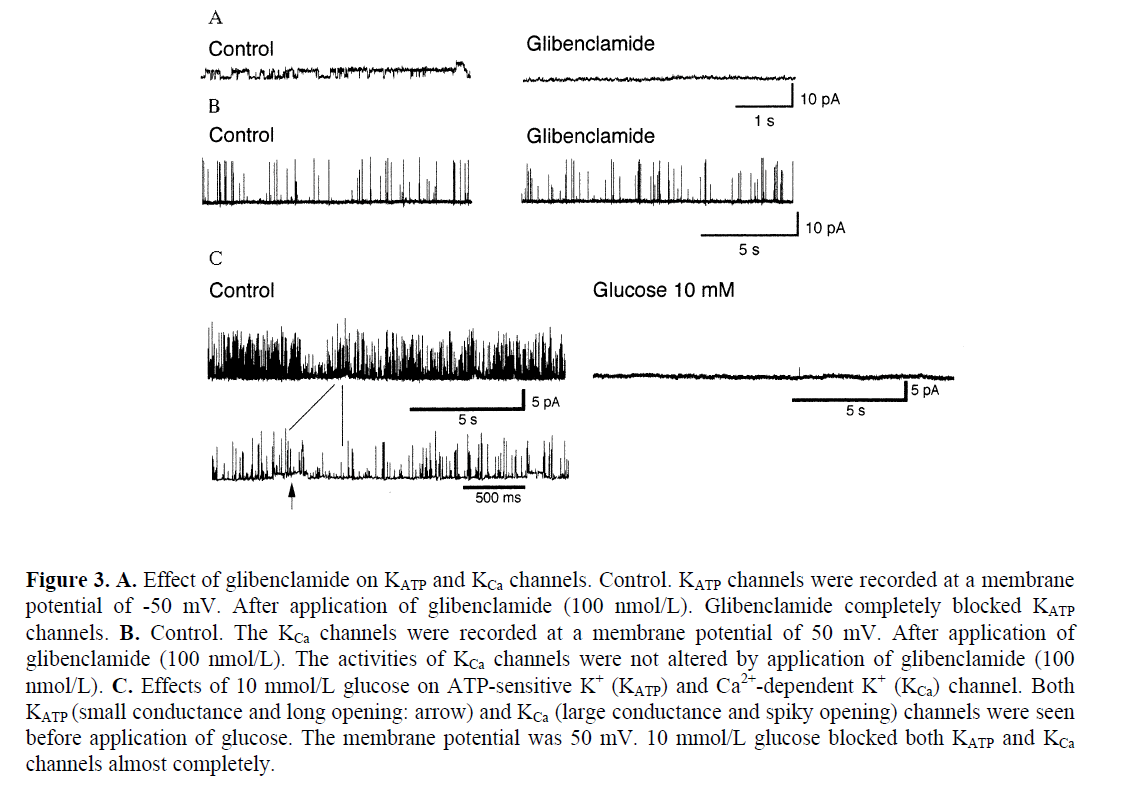 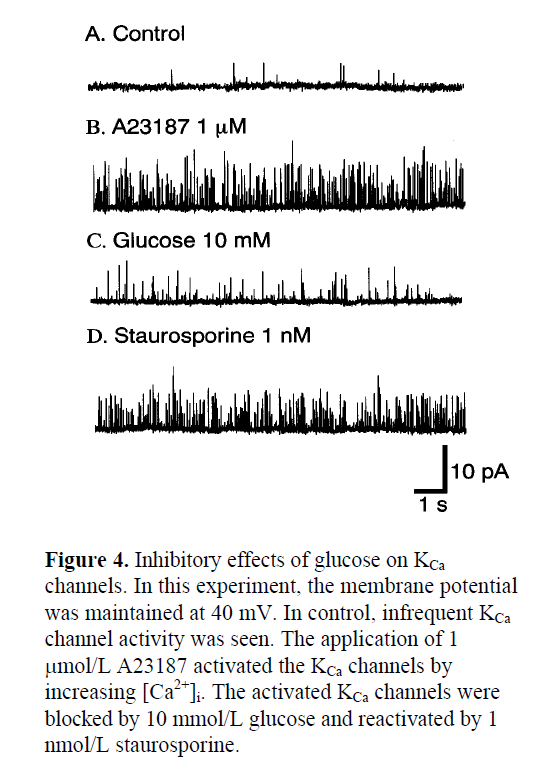 Figure 4. Inhibitory effects of glucose on KCa channels. In this experiment, the membrane potential was maintained at 40 mV. In control, infrequent KCa channel activity was seen. The application of 1 mmol/L A23187 activated the KCa channels by increasing [Ca2+]i. The activated KCa channels were blocked by 10 mmol/L glucose and reactivated by 1 nmol/L staurosporine. 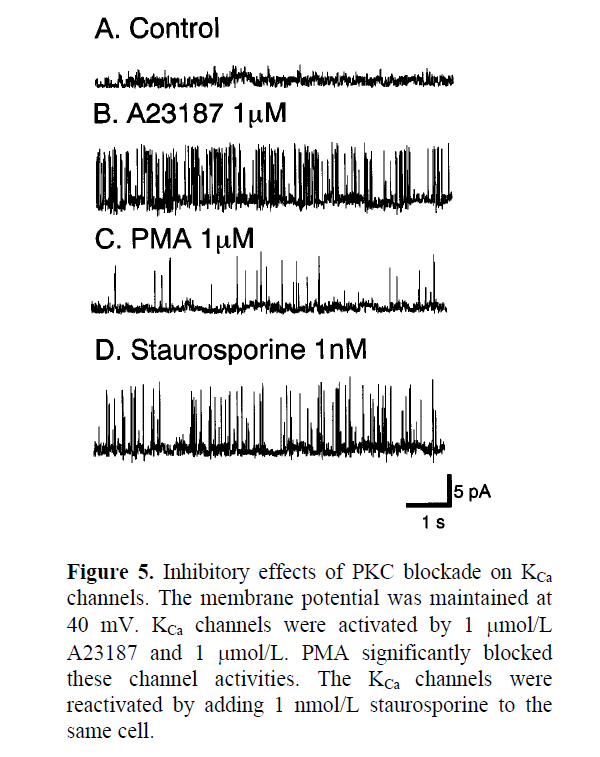 The purpose of the present study was to clarify the significance of PKC in the secretion of insulin induced by glucose. Staurosporine, a PKC inhibitor, attenuated such secretion in insulinoma HIT cells. In patch clamp studies, glucose blocked both the KCa and the KATP channels. This blockade appeared to be mediated by PKC, since staurosporine reversed the effect and PMA mimicked it. Staurosporine also attenuated the increase in [Ca2+]i levels caused by glucose. Thus, PKC contributed to the glucose-induced secretion of insulin at least partly by blocking the KCa channels.

PKC is a calcium- and phospholipiddependent enzyme that is activated by the endogenous second messenger, diacylglycerol [22]. A variety of approaches have been used to investigate the role of the activation of PKC in stimulated secretion. The activation of PKC by such phorbol esters as 12-Otetradecanoylphorbol- 13-acetate (TPA) stimulates the secretion of insulin in the absence or presence of basal levels of glucose (2.8 mmol/L) in rat islet cells [23, 24] and insulinoma cells [16]. In our present study, staurosporine partially suppressed the secretion of insulin by glucose, thus suggesting the involvement of PKC.

Phorbol ester, an activator of PKC, has previously been shown to block K+ currents in several cell types [19]. The ensuing activation of PKC due to an increase in the level of diacylglycerol leads to the closure of KATP channels. In RINm5F cells, it was also reported that PMA reduces KATP channel activity, leading to membrane depolarization and an increase in [Ca2+]i levels [27]. HIT-T15 cells have the secretory properties of normal islets and respond to nutrient secretagogues such as glucose. Eddkestone et al. demonstrated that glucose depolarizes HIT cells by closing KATP channels [28]. Although HIT-T15 cells have been reported to decrease glucose-induced insulin secretion as passage increases, it has both KATP and KCa channels and they have properties very similar to normal beta cells. Thus, the HIT cells appeared to be a valid model for the investigation. The present study focused on KCa channels, so we did not study KATP channels extensively. Our data showed that in the cell-attached patch configurations, glucose and PMA inhibited the KCa channels that were activated by increasing the [Ca2+]i levels by treatment with A23187 (Figures 4 and 5). The PKC inhibitor staurosporine significantly activated the KCa channels blocked either by glucose (Figure 4) or PMA (Figure 5). These results indicate that the activation of PKC inhibits KCa channels, probably via phosphorylation of the channel protein.