Context Squamous cell carcinoma of the pancreas is an unusual tumor due to the absence of squamous cells in the normal pancreas. Its clinical presentation is similar to that of adenocarcinoma of the pancreas and is usually diagnosed intraoperatively or at autopsy. Case report We report a 50-year-old male who presented with obstructive jaundice and symptoms suggestive of gastric outlet obstruction. Contrast-enhanced computerized tomography revealed a heterogeneous enhancing mass in the head of pancreas and upper gastrointestinal endoscopy revealed an ulcerated polypoidal lesion in the stomach; the endoscopic biopsies taken from this region revealed infiltration of the lamina propria with malignant squamous cells. Conclusion A rare case of squamous cell carcinoma of the head of the pancreas presenting with obstructive jaundice and gastric outlet obstruction and in which diagnosis was established by endoscopic biopsies of the stomach has been described.

A 50-year-old male presented to us with a history of non-colicky pain of 2-month duration which was localized to the upper abdomen and radiated to the back. It was intermittent in nature, severe in intensity and aggravated by meals. This pain was accompanied by a history of post-prandial non-bilious vomiting containing partially digested food particles and progressively increasing jaundice with clay-colored stools. There was no history of fever or pruritus. These complaints were accompanied by a significant loss of appetite and weight. There was a history of smoking and alcohol consumption. Examination revealed an icteric patient with a non-tender, hard abdominal mass in the upper abdomen.

Investigations revealed normal hemoglobin, a total leukocyte count, renal function tests and serum electrolytes. The serum bilirubin was 28 mg/dL (reference range: 0-1 mg/dL) with a conjugated fraction of 21 mg/dL and serum alkaline phosphatase was 826 IU/L (reference range: 40-128 IU/L). The other biochemical parameters were normal. Contrastenhanced computerized tomography (CECT) of the abdomen revealed a large heterogeneous enhancing mass in the head of the pancreas (Figure 1) causing dilation of the main pancreatic duct and obstruction of the lower common bile duct with asymmetric mural thickening of the antropyloric region and the first and second part of the duodenum with multiple enlarged lymph nodes at the porta, peripancreatic and upper retroperitoneal region. There was the presence of ascites. Upper gastrointestinal endoscopy revealed a normal esophagus with ulcerated polypoidal lesions in the antropyloric region causing distortion and obstruction of the lumen beyond which the endoscope was not negotiable (Figure 2). The biopsies taken from this region revealed intestinal metaplasia with infiltration of the lamina propria with malignant squamous cells (Figure 3). The orpharyngeal and nasal examination and subsequently performed CECT of the neck and chest were normal. In view of the disseminated malignancy and poor general condition of the patient, palliative treatment was advised. Because of symptomatic gastric outlet obstruction and refusal of enteral stent placement, a feeding jejunostomy tube was placed. Metastatic deposits, along with free fluid in the peritoneal cavity, were noted intra-operatively. Cytological examination of the peritoneal fluid revealed the presence of malignant squamous cells. Following establishment of adequate enteral nutritional access, the patient was discharged and advised to follow up in the oncology clinic. 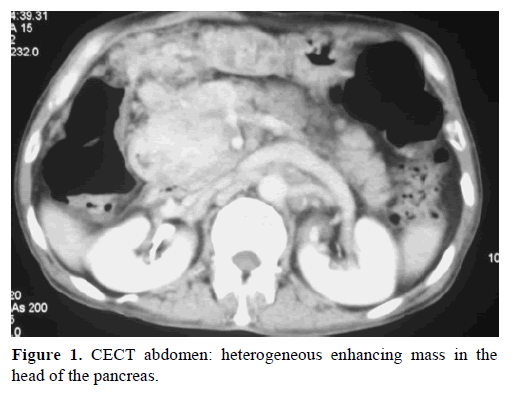 Figure 1. CECT abdomen: heterogeneous enhancing mass in the head of the pancreas. 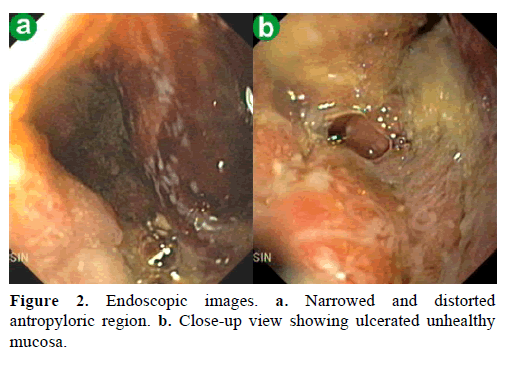 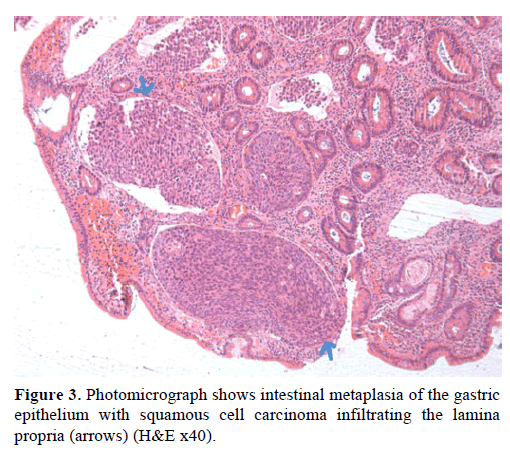 Squamous cell carcinoma is a rare malignancy of the pancreas and its exact cell of origin is not known. It is speculated to have originated from either a primitive cell capable of differentiating into either squamous or glandular carcinoma, an adenocarcinoma undergoing squamous transformation, malignant transformation of the squamous metaplasia of the ductal epithelium or an aberrant squamous cell undergoing a malignant change [4].

Squamous cell carcinoma of the pancreas usually carries a poor prognosis. Because of widespread dissemination at the time of initial diagnosis or surgery, curative resection is not possible in most of cases, as also happened in our case [2]. Although there are reports of the use of chemotherapeutic agents including an objective response to gemcitabine in unresectable tumors, the response to various chemotherapeutic agents as well as radiotherapy is not encouraging and the prognosis of this malignancy remains poor [2, 8, 9, 10].

In conclusion, we have described a rare case of squamous cell carcinoma of the head of the pancreas presenting with obstructive jaundice and gastric outlet obstruction and in which diagnosis was established by endoscopic biopsies of the stomach.