Context Although there exists multiple modalities of managing traumatic pancreatic pseudocysts it remains a diagnostic and  therapeutic challenge. We report herein a case that was successfully managed by endoscopic ultrasound guided transgastric stent placement. Case report A 28-year-old female jockey presented with abdominal pain after being kicked by a horse. Computerised tomography and magnetic resonance imaging revealed pancreatitis which resolved with conservative treatment. She proceeded to develop a pancreatic pseudocyst  demonstrated on a magnetic resonance cholangiopancreatogram. This was managed by transgastric placement of two double pigtail stents into the pseudocyst by endoscopic ultrasound guidance. Rapid recovery followed with the patient remaining well on follow up. Conclusions: EUS guided transgastric stent placement for drainage of pancreatic psuedocysts is recommended particularly if they are in close proximity to the stomach.

AAST: American Association for the Surgery of Trauma

A 28-year-old female jockey was admitted with abdominal pain and epigastric tenderness after being kicked by a horse. An urgent computerised tomography (CT) scan (dual phase noncontrast and portal venous phase) revealed pancreatic trauma with possible pancreatic transection at junction of body and tail and she was referred to our unit.

Within hours of sustaining the injury she developed an upper abdominal bruise with an elevated C reactive protein of 63 mg/L (reference range: 0-10 mg/L) and a serum amylase of 1,113 IU/L (reference range: 0- 110 IU/L). All her biochemical parameters pointed to a severe acute pancreatitis (modified Glasgow criteria). Review of her CT scan showed extensive oedematous pancreatitis and peripancreatic inflammation around distal body and tail with no fluid collections. The patient was treated conservatively with nasojejunal feeding and intravenous octreotide (200 μg 8 hourly), as the state of the continuity of pancreatic duct was not known.

At 2-month follow-up the patient had developed an upper abdominal mass and an urgent MRCP showed a large pseudocyst related to the body and tail of the pancreas, with cyst ductal communication (Figure 1). Transgastric placement of 2 double pigtail stents into the pseudocyst was achieved under endoscopic ultrasound (EUS) guidance, with immediate decompression of the cyst and good symptomatic relief. The patient improved and was discharged 3 days later. 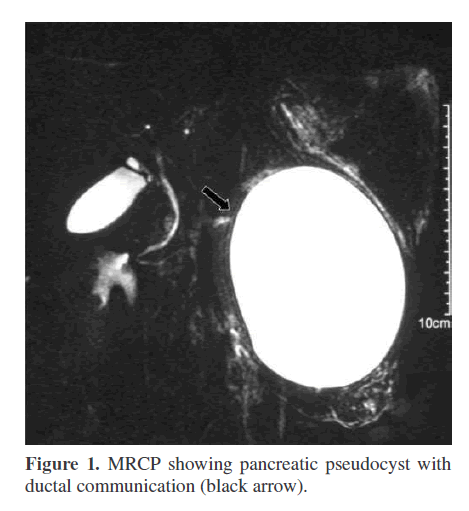 Following stent insertion an endoscopic retrograde cholangiopancreatogram (ERCP) was done that revealed possible stricturing of the pancreatic duct at the junction of the body and tail (Figure 2). Following resolution of the pseudocyst confirmed by ultrasound scan, she proceeded to have the stents removed by an upper gastrointestinal endoscopy. The patient had regular follow up in clinic and had no evidence of pancreatic exocrine or endocrine insufficiency. A secretin stimulated MRCP (4 weeks post stent removal) revealed minimal narrowing of the pancreatic duct in the body of pancreas with mild distal dilatation (Figure 3). As the patient was completely asymptomatic a conservative approach was adopted. She remains well at one year follow up and is back to work as a jockey. 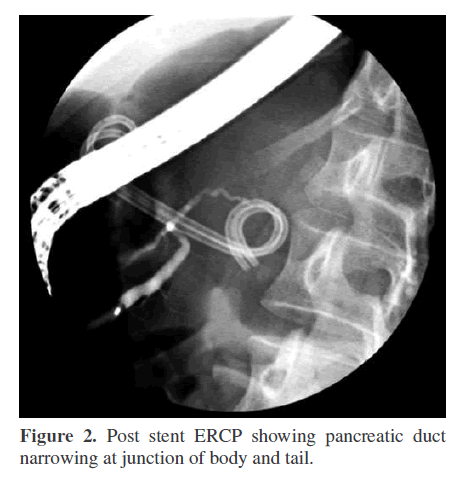 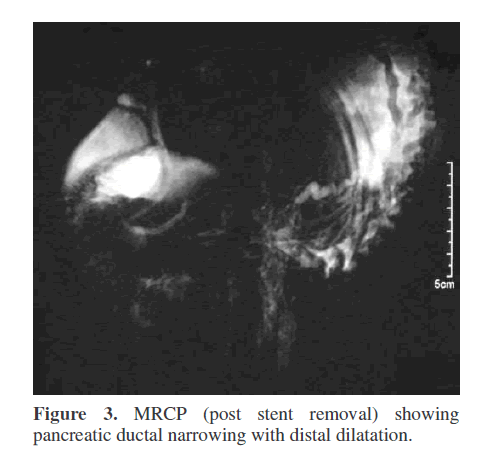 Pancreatic trauma occurs in less than 5% of major abdominal injuries [3] due to its relatively safe retroperitoneal location. Isolated pancreatic trauma is rare owing to the high-energy forces involved and is often not diagnosed early leading to significant morbidity and mortality.

Serum amylase is notoriously unreliable in predicting pancreatic injury, especially on admission [4]. CT has been advocated as the best initial imaging in stable patients with suspected pancreatic injury reporting sensitivities and specificities as high as 80% [5]. However, particularly in the early phase, CT can miss or underestimate the severity of pancreatic injury [6].

Further imaging often involves ERCP or MRCP especially when pancreatic ductal trauma is suspected. The urgent and accurate diagnosis of major pancreatic duct disruption is essential in limiting the complications of traumatic pancreatitis. ERCP has the advantage of providing detailed information about the ductal system and the option of stenting a disrupted pancreatic duct [7]. Unfortunately, due to its invasive nature most trauma patients are too unstable and cannot withstand the positioning required. MRCP is being used increasingly as a non-invasive alternative to demonstrate duct disruption and associated fluid collection.

Most injuries to the pancreas comprise of relatively minor lacerations and contusions (American Association for the Surgery of Trauma, AAST grades I and II) (Table 1) and are adequately managed conservatively [8]. Major pancreatic trauma (AAST grades III-V) (Table 1) involves transection of the duct and requires more extensive procedures including distal pancreatectomy (around 29% of operations done for pancreatic injuries) [9], Roux-en-Y pancreaticojejunostomy and pancreaticoduodenectomy (10%). Surgery remains an aggressive approach with accompanying high morbidity and mortality [9].

Pancreatic complications can be divided into early and late. Early complications include pancreatitis, fistula and abscess formation. Late pancreatic complications are pseudocyst formation, exocrine and endocrine deficiency. Accurate diagnosis and appropriate treatment of pancreatic injuries result in a rate of pseudocyst formation of about 2-3% [10]. Current management options include open or laparoscopic cystoenterostomy [11], percutaneous drainage [12], or resection. Open cystoenterostomies have a high success rate but require a mature cyst wall to hold sutures. Percutaneous drainage has the drawbacks of skin discomfort and infection, and may leave a long-term cutaneous fistula. Cyst resection involves extensive surgery and increased morbidity. Nealon and Walser in a study detailing complications associated with percutaneous drainage and endoscopic drainage of pseudocysts found a large percentage developing life-threatening problems, the commonest being clinical sepsis in 91% [13]. Internal stenting allows for a less aggressive approach to cyst drainage. Using endoscopic guidance alone, a prominent mucosal bulge is required to identify the site of pseudocyst puncture, and submucosal vessels are not obvious. Use of EUS, allows for a highly detailed view of the pseudocyst and surrounding topography [14], and subsurface vessels can readily be detected with colour Doppler. Provision of two pigtail stents covers the eventuality of a stent migration with reaccumulation of pseudocyst. EUS guided transgastric stenting of pancreatic pseudocysts would be recommended particularly if they are in close proximity to the stomach.