Context Pancreatic adenocarcinoma presenting as idiopathic thrombocytopenic purpura has not been previously reported in the literature.Case report A newly diagnosed patient with metastatic pancreatic adenocarcinoma developed thrombocytopenic purpura prior to initiation of chemotherapy. Generalized petechiae were present and peripheral smear revealed giant platelets. Drug induced and other thrombotic platelet consuming disorders were ruled out. Her platelets returned to normal after being treated with steroids.Conclusions ITP can be associated with metastatic pancreatic adenocarcinoma and can respond well to steroid treatment.

Cancer of the pancreas is the fourth leading cause of cancer-related death in the United States, and is second only to colorectal cancer as a cause of digestive cancer-related death. Approximately 33,730 new cases are anticipated in 2006, with 32,300 expected deaths [1]. Tumors of the pancreatic body or tail usually present with pain and weight loss, while those in the head of the gland typically present with steatorrhea, weight loss, and jaundice. The recent onset of atypical diabetes mellitus, a history of recent but unexplained thrombophlebitis [2], or previous attacks of pancreatitis are sometimes noted. Pancreatic cancer manifesting with idiopathic thrombocytopenic purpura (ITP) has not been previously reported. We are presenting the case of a patient who developed ITP before the initiation of the chemotherapy.

The patient presented to our institute for a second opinion. Her platelet count on the day of her first visit was 299 x109/L, hemoglo of 9.1 g/dL and white blood cells of 12.9 x109/L (reference range: 4-11 x109/L). The chemistry was unremarkable except for alkaline phosphatase of 426 U/L (reference range: 38-126 U/L), alanine aminotransferase (ALT) of 90 U/L (reference range: 11-66 U/L) and aspartate aminotransferase (AST) of 85 U/L (reference range: 15-46 U/L). Her medications included lansoprazole 15 mg per os daily, ferrous gluconate 325 mg per os daily, oxycodone 20 mg per os twice daily, alprazolam 0.25 mg per os every 6 h as needed, multivitamin per os daily, bisacodyl suppository as needed. A repeat CT scan (Figure 1) was performed which showed a 1.2x2.0 cm lesion in the tail of the pancreas suspicious of a primary and confirmed extensive metastatic disease to the liver. A large infarct in the lower third of the spleen and thrombosis of the bilateral gonadal vein were also noted. 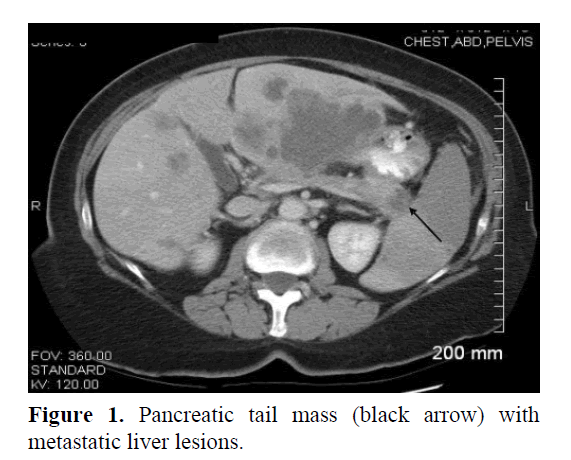 An ultrasound guided core biopsy of the liver lesion was repeated one week after her baseline visit; this showed atypical angulated glands with desmoplasia consistent with metastatic, moderately differentiated adenocarcinoma from primary pancreaticobiliary origin (Figure 2). On the day of liver biopsy she was noted to have bruises and multiple petechiae and on further questioning she voiced that she had been having black colored stools. The complete blood count checked after the procedure showed the platelet count of 2 x109/L and hemoglobin of 7.6 g/dL There was no history of any new medications. Disseminated intravascular coagulation profile was normal: prothrombin time 14.8 sec (reference range: 11.7-15.0 sec); partial thromboplastin time 24 sec (reference range: 23-35 sec); INR =1.3, D-dimer greater than 4 μg/fibrinogen equivalent units (reference range: 0-0.5 μg/fibrinogen equivalent units), fibrinogen 385 mg/dL (reference range: 200- 420 mg/dL). Peripheral smear was consistent with ITP with presence of megaplatelets and lack of schistocytes (Figure 3). A diagnosis of ITP was made based on clinical grounds. She was started on prednisone at 1 mg/kg (80 mg) daily. Her platelet count rose to 8.0, 47, and 155 x109/L on the 3rd, 7th, and 11th days of prednisone, respectively. The initial presence of megaplatelets coupled with the complete resolution of thrombocytopenia with high dose prednisone treatment was considered pathognomonic of ITP in this case. Thus, no anti-platelet antibodies or bone marrow biopsy were performed. Chemotherapy was initiated with gemcitabine 1000 mg/m2 on day 1 and 8 on every 21 day cycle and capecitabine 650 mg/m2 per os twice daily for 2 weeks out of 3 week cycle. One week later, she developed a deep vein thrombosis of the left lower extremity and was started on enoxaparin at 1.5 mg/kg/day subcutaneously. Her platelets remained more than 100 x109/L during chemotherapy, which allowed a complete wean off prednisone. Unfortunately, her disease progressed after 2 cycles of chemotherapy and supportive measures were initiated. One week after the chemotherapy was stopped, she developed confusion and hemiparesis. A magnetic resonance imaging (MRI) of the brain revealed a right frontal infarct. She died shortly after.

To our knowledge, this is the first reported case of metastatic pancreatic cancer presenting as ITP. The diagnosis of paraneoplastic pancreatic cancer-associated ITP was made in the absence of disseminated intravascular coagulation and with the lack of any new drug interventions (drug induced ITP). This autoimmune process was supported by the presence of megaplatelets and by its response to steroids prior to initiation of treatment. An extensive review of the literature revealed one prior case of ITP in the setting of a pancreatic adenoma but none were reported in association with metastatic pancreatic cancer [3]. The underlying mechanism of ITP in our patient is not known but it could be immune mediated as described in other solid tumor malignancies.

The diagnosis of ITP is usually one of exclusion of underlying systemic disorders that result in increased peripheral destruction or decreased production of platelets. ITP is an autoimmune disorder characterized by auto reactive antibodies against platelets resulting in splenic sequestration and thrombocytopenia. Immune mediated thrombocytopenia can also occur in the settings of lymphoproliferative disorders, especially chronic lymphocytic leukemia. The association between ITP and lymphoma, in particular Hodgkin disease, has also been frequently reported [4, 5, 6]. There have been approx 20 cases of ITP reported in association with various solid tumors, including lung, breast, and ovarian cancers [7, 8, 9]. Kim and Boggs [10] reported malignancy in 10 of 52 consecutive patients admitted for ITP; six of the ten cases had solid tumors

Thrombocytopenia in pancreatic cancer is usually attributed to disseminated intravascular coagulation, leading to discontinuation of chemotherapy and/or anticoagulation therapy. This case highlights the possibility of paraneoplastic ITP in association with advanced pancreatic cancer. The management of this entity includes high dose steroid therapy and prompt initiation of chemotherapy.

Pancreatic cancer can present with paraneoplastic manifestation of an ITP. Its relationship to survival is unknown due to the rare presentation.