Intraductal Papillary Mucinous Neoplasms of the Pancreas: Clinical Surveillance and Malignant Progression, Multifocality and Implications of a Field-Defect

Intraductal papillary mucinous neoplasms (IPMNs) are a heterogeneous group of mucin producing cystic tumors that involve the main pancreatic duct and/or branch ducts and may be associated with invasive carcinoma. Predicting the risk of malignant transformation of an IPMN lesion can be challenging. The Sendai criteria, based in large part on radiographic imaging features, help guide surgical intervention based on the stratification of cysts into high and low risk lesions for malignancy. Invasive carcinoma may develop in the index IPMN lesion or in a separate site within the pancreas, supporting the concept of a field defect in IPMN tumorigenesis. This stresses the importance of evaluation of the entire pancreas upon diagnosis of IPMN and continued surveillance of the residual pancreas following resection. Herein, the authors summarize the data presented at the 2012 ASCO Gastrointestinal Cancers Symposium regarding prevalence and site of invasive carcinoma detected in patients undergoing surveillance for IPMN (Abstract #152).

What Did We Know Before the 2012 GI Cancers Symposium?

The diagnosis of intraductal papillary mucinous neoplasms (IPMNs) has increased markedly in the past decade in large part due to the widespread use of high resolution imaging [1]. In recent years, increasing numbers of asymptomatic branch duct IPMNs are noted incidentally on CT or MRI scans [2, 3]. IPMNs represent a heterogeneous group of neoplasms that can be classified radiographically with respect to anatomic location (main duct versus branch duct), and pathologically with respect to grade of dysplasia and histologic subtype. IPMNs show a wide spectrum of biological behavior. IPMNs involving the main duct have a higher risk of associated carcinoma (60-80%) compared to branch duct IPMNs demonstrating malignancy in fewer than 20% of cases [4, 5, 6, 7, 8, 9].

When identified, IPMNs represent an opportunity for early recognition or outright prevention of pancreatic cancer. It is well accepted that main duct IPMNs and a subgroup of branch duct IPMNs with features outlined in the International Consensus Guidelines should be resected [4].

Update from the 2012 GI Cancers Symposium

LaFemina et al. analyzed the prevalence and site of invasive pancreatic cancers developing within a surveillance cohort of IPMNs which included both high- and low-risk tumors. In this study over a five year interval (1995-2010), 157 patients with pancreatic cysts diagnosed as IPMNs (pathologic confirmation or CEA equal to, or greater than, 200 ng/mL) were followed for at least 6 months after diagnosis. Subsequent resection was performed in 97 patients, of which 40 had either carcinoma in-situ or invasive carcinoma.

The surveillance group in this study was composed of a heterogeneous population of IPMNs that included tumors at high-risk for harboring malignancy (either main duct involvement or other high-risk features). It may be possible that a significant percentage of the patients ultimately undergoing resection in this series represented those patients with high-risk IPMNs, since 40/97 (41%) had carcinoma in-situ or invasive carcinoma present in the resection specimen. Of the 18 patients with invasive carcinoma, 13 (72%) had main duct IPMN or combined duct IPMN and 5/18 (28%) had branch duct IPMN (Figure 1). The pathologic findings in the IPMN specimens show that while the majority (14/18, 78%) of invasive carcinomas were associated with the index IPMN lesion, a small but significant subset of invasive carcinomas (4/18, 22%) involved a region of the pancreas distinct from the radiographically identified lesion for which surveillance was recommended. This study supports the concept that the presence of IPMN in the pancreas increases cancer risk not only within the IPMN cystic lesion but within the entire pancreas. 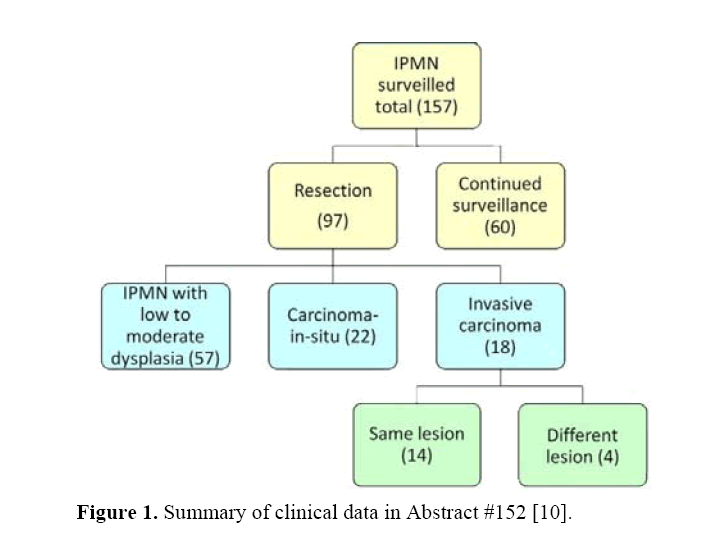 The diagnosis and treatment of IPMNs of the pancreas have evolved over the last decade. The current guidelines for assessing malignant potential in IPMNs are largely based on the imaging characteristics of the cysts in conjunction with the clinical symptoms of the patient. The International Consensus Guidelines for the management of IPMN or “Sendai criteria” (Table 1) were not based on long term follow up of branch duct IPMN patients [4]. Instead the criteria were based on the best available retrospective data documenting the extremely low incidence of invasive radiologic features in branch duct IPMNs with a cyst size of less than 3 cm, and without mural nodules or main-duct dilation.

Appropriate treatment rests on accurate radiologic characterization of the cystic lesion, in conjunction with biochemical, histopathological, or molecular evaluation to guide management and estimate malignant potential of the IPMN tumor [11, 12, 13]. In view of the heterogeneity of tumor cells within the lesions the most important variable in pathologic diagnosis involves representative sampling of the lesion. The most challenging issue is predicting the clinical behavior and risk of malignancy with limited sampling of tissue or cyst fluid that may not reflect the changes throughout the lesion. To date there is no reliable surveillance protocol to identify an early invasive carcinoma in IPMN or a clinical model that can predict the time frame for cancer progression in IPMN.

It is well recognized that IPMNs are commonly multifocal [9, 14, 15]. In view of the multifocality demonstrated by the lesions, evaluation of the dominant cyst may not provide informative data regarding tumor development in separate cysts or in the remaining non-cystic pancreatic tissue. The concept of a field defect is well characterized in other tumor types (e.g., urothelial carcinoma, colonic carcinoma) and it is common for at-risk individuals to be subjected to routine surveillance of the entire organ at frequent intervals. Surveillance of the pancreas, however, is far more difficult than surveillance of other organ systems. Once an IPMN is present in the pancreas the entire organ is at increased risk for developing carcinoma. To date there have been several studies of patients with IPMNs that developed synchronous or metachronous invasive adenocarcinoma. Several studies have documented the presence of invasive carcinoma identified in an area of the pancreas distinct from the index IPMN lesion undergoing surveillance [16, 17, 18]. Tanno et al. identified invasive carcinoma in 9 (5%) of 168 patients with IPMN. Five were synchronous lesions, detected at the time of branch duct IPMN diagnosis, whereas four were metachronous lesions, identified during the follow-up period. All invasive carcinomas occurred in regions separate from the branch duct IPMN lesion. All branch duct IPMNs were diagnosed as adenoma [18]. Uehara et al. followed 60 patients with branch duct IPMN with main duct size less than 10 mm. Pancreatic cancer developed in 7/60 (12%) of these patients after 18-112 months of follow-up. In 5 of 7 patients (71%) the invasive carcinoma was separate from the index cystic lesion [19].

In patients who have undergone resection for IPMN with negative margins it is also important to survey for synchronous tumor development; invasive carcinoma developing in the remnant pancreas has been documented. Miller et al. followed 153 patients who underwent resection for IPMN with negative resection margins. During a mean follow-up of 73 months, 31/153 (20%) developed a new radiographic lesion consistent with IPMN and three of these patients were found to have invasive cancer [20].

Several molecular studies of IPMNs support the concept of a field defect and show evidence that multifocal IPMNs are clonally distinct from each other. Matthaei et al. assessed the clonal relationships of 30 multifocal IPMNs arising in 13 patients [21]. The majority of multifocal IPMNs were composed of branch duct lesions, and typically demonstrated a gastric-foveolar epithelium with low or intermediate grades of dysplasia. KRAS mutation analysis and loss of heterozygosity (LOH) analysis on chromosomes 6q and 17p were performed on all IPMNs. Molecular analysis of multiple IPMNs from 13 patients demonstrated non-overlapping KRAS gene mutations in 8 patients (62%) and discordant loss of heterozygosity profiles in 7 patients (54%); independent genetic alterations were established in 9 of the 13 patients (69%). From this study it appears that the majority of multifocal IPMNs arise independently and exhibit a gastric-foveolar subtype, with low to intermediate dysplasia [21]. These findings confirm evidence of molecular heterogeneity in multifocal IPMN lesions involving early low-grade neoplasms.

We are only beginning to understand the biology of IPMN tumorigenesis. Current molecular studies highlight the concept that neoplastic changes in IPMNs involve alterations that are not only identified in the cystic lesions but affect the entire pancreas and are heterogeneous in nature. The presence of an IPMN lesion in the pancreas places the entire organ at increased risk for developing carcinoma, and surveillance of the entire pancreas or continued surveillance of the remnant pancreas is warranted in order to detect an invasive carcinoma arising in a separate area of the pancreas. A multidisciplinary approach involving gastroenterologists, surgeons, radiologists and pathologists is central to the optimal management of these patients.