Context Johanson-Blizzard Syndrome (JBS) is a rare autosomal recessive syndrome characterized by dysmorphic nasal alae, ectodermal abnormalities, exocrine pancreatic insufficiency and early growth failure. Most patients are diagnosed by clinical criteria prenatally or in early infancy. Nonsense, frame shift and splice-site mutations of the ubiquitin ligase gene (UBR1) lead to early loss of acinar cells in individuals with JBS. Case Report We describe a previously asymptomatic patient with ectodermal dysplasia presenting with sudden onset exocrine pancreatic insufficiency in adolescence. The family reports an identical twin brother with similar symptoms. Conclusion This case illustrates that the phenotypic variability of pancreatic involvement in JBS may be subtle and may not manifest until the second decade of life. We suspect that this mild phenotype results from mutations in UBR1 allowing for partial function.

Johanson-Blizzard Syndrome (JBS) (OMIM #243800) is a rare autosomal recessive disorder first described in 1971 by Johanson and Blizzard [1]. Recent review of the medical literature identifies fewer than 100 cases reported worldwide, primarily in consanguineous unions [1, 2]. The syndrome is most classically characterized by severe congenital exocrine pancreatic insufficiency and hypoplasia or aplasia of the nasal alae. Additional features include: short stature (>80%), dental abnormalities (>80%), sensorineural hearing loss (80%), mental retardation (77%), scalp defects including alopecia (76%), hypothyroidism (40%), imperforate anus (39%), and genitourinary malformations (38%) [2]. Cardiac defects have been reported [3-5]. Neonatal or early exocrine pancreatic insufficiency is thought to be a consistent finding in JBS. Abdominal imaging of affected patients shows replacement of the exocrine pancreas by lipomatous and connective tissues [1, 2]. Autopsy studies reveal a significant deficit in pancreatic acinar cells; however, the islets of Langerhans remain intact [6]. This defect leads to almost complete absence of pancreatic enzymes in duodenal secretions resulting in maldigestion and poor absorption. Here we present a 15 year old male with the onset of pancreatic insufficiency in mid-adolescence with report of a similarly affected identical twin. 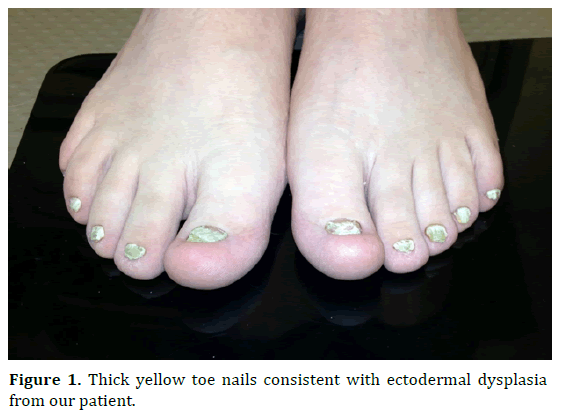 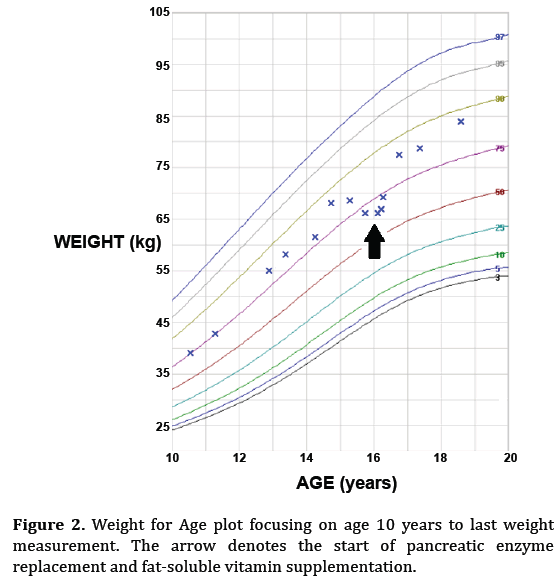 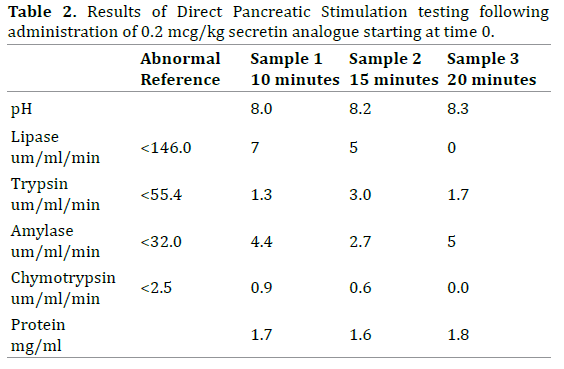 The patient has an identical twin brother with ectodermal dysplasia, a thin body habitus and reported chronic diarrhea beginning at 16 years of age. The brother declined all formal medical evaluation.

Classic cases of JBS present in early infancy with syndromic features and severe exocrine pancreatic insufficiency. The genetic defect of JBS is a homozygous loss-of-function mutation in the Ubiquitin-Protein Ligase E3 Component N-Recognin 1 (UBR1) gene [1, 5]. This gene is highly expressed in pancreatic tissue [3] where it functions primarily in the regulation of protein degradation, control of the levels of many intracellular proteins and perhaps as a defense against noxious stimuli [2]. UBR1 protein deficiency contributes to the gradual destruction of previously formed acinar cells resembling pancreatitis of intrauterine onset [3]. Nonsense, frame shift and splicesite mutations have been described in classic, severe cases [1]; whereas, missense or in-frame deletions are thought to lead to less severe phenotypic presentations of JBS [3, 8, 9].

Previous case reports have described heterozygous deletions or missense mutations with resultant partial or residual UBR1 activity and pancreatic function; this has been thought to explain the reported mild phenotypes of this disease [6, 8]. Variable expressivity of the same mutation within a family is well documented [3].

Our patient presented with sudden onset of pancreatic insufficiency as demonstrated by acute weight loss, oily stools and fat-soluble vitamin malabsorption at 15 years of age. We hypothesize that an existing subtle phenotype in conjunction with a progressive destructive process of the pancreas ultimately resulted in exocrine pancreatic insufficiency. Infectious, environmental or epigenetic factors may influence the timing of these phenotypic events. It is thought that an ongoing destructive process plays a role in the development of endocrine insufficiency and insulin deficiency later in life [1-3, 6].

Johanson-Blizzard Syndrome is a rare autosomal recessive form of congenital pancreatic insufficiency. This case illustrates that exocrine pancreatic insufficiency can occur as an evolving process manifesting later in life. Missense, in-frame deletions and heterozygous mutations which have differing, less pathologic effects likely explain the milder phenotypes of this disease [3, 8, 9]. It is important to recognize the phenotypic variations of this syndrome when caring for those with ectodermal dysplasia who may initially lack the typical findings of exocrine pancreatic insufficiency, as there may be more patients with milder phenotypes than previously identified.

We would like to thank Drs. Cheryl Gariepy, Jennifer Dotson and Soma Kumar for their thoughtful review and comments on this case report.

The authors have no conflicts or disclosures.