Based on World Health Organization (WHO) criteria, Mucinous cystic neoplasms (MCNs) of the pancreas are defined as cystic epitheilal neoplasms composed of mucin producing colomnar epithelium and an ovariantype stroma (OS) [1]. Diagnosis and surgical resection of MCN are imporatnt because of its significant malignant potential. MCNs almost always occur in women. We present a case of MCN in a male patient diagnosed by endoscopic ultrasonography (EUS) preoperatively. 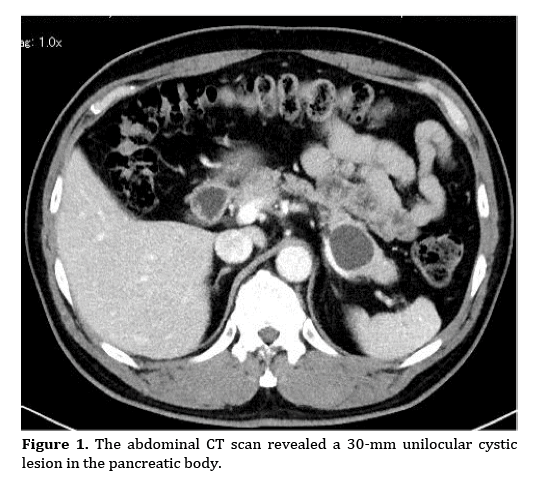 Figure 2. Magnetic resonance cholangiopancreatography showed a unilocular cystic lesion in the pancreatic body without dilatation of the main pancreatic duct. 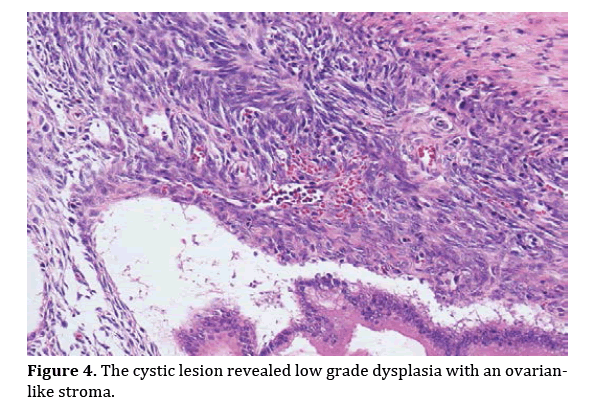 Diagnostic errors of cystic lesions of the pancreas are quite common. The overall accuracy of the preoperative diagnosis was 60.9% [2]. MCNs typically appear as large unilocular or multilocular cysts with thin septase on CT or MRI. Differential diagnosis is still dificul especially in case of unilocular lesion because other pancreatic neoplastic lesions sometimes appear unilocular cyst. EUS may be more helpful for the diagnosis and differentiation of the cystic lesion because of its high resolution and better imaging characteristics than other modatities [3]. EUS was also useful for diagnosis in our case. Although the frequency of “cyst in cyst” appearance of MCN on EUS has been reported not so high as 38 %, it is a specific feature of MCN on EUS [4].

To our knowledge, only 13 cases of MCNs were reported in men since intraductal papillary mucinous neplasm and MCN clearly defined by the WHO (Table 1). Of these, only 8 cases were described in detail. Recently, a multiinstitutional study of the Japan Pancreas Society reported only 3 men (1.9%) of 156 MCN patients with OS [5]. Among the 8 cases described in detail, CT were conducted in all cases, MRI in 6, and EUS in 4. However, in all but our case, the preoperative diagnosis was different from MCN because MCN almost exclusively occur in female, and the imaging studies do not infrequently show typical findings of MCN. We present an extremely rare case of MCN in a male patient diagnosed by EUS with typical findings. MCN should be considered in the differential diagnosis of pancreatic lesion in men, as well as women.

We would like to thank Dr. Kitano M and Chikugo T for conducting EUS and histological diagnosis.