Context Intraductal papillary mucinous neoplasms of the pancreas (IPMNs), usually present with a picture of chronic pancreatitis and must be considered within the differential diagnosis of this condition. Case report We report a long history of a 58- year-old male who presented with recurrent attacks of pancreatitis. He was treated for chronic pancreatitis until the age of 78 when the diagnosis of IPMN was made, but radical treatment was not possible and he was managed palliatively. The patient died of sepsis and multi-organ failure 21 years following his first presentation. Conclusion This case highlights possible pitfalls in the diagnosis and treatment of IPMNs, suggests a very long natural history, proposes possible palliative treatment in selected cases and reflects about IPMNs biological position in the chronic pancreatitisductal adenocarcinoma chain..

Intraductal papillary mucinous neoplasms (IPMNs) are recently classified cystic neoplasms, which originate from the epithelium of the pancreatic ducts [1, 2]. For many decades these tumors were wrongly classified as cases of obstructive chronic pancreatitis due to their similar clinical presentation.

The neoplastic transformation of the epithelium starts with mild dysplasia and proceeds toward malignant degeneration [2, 3, 4].

The accepted treatment is pancreatic resection with total pancreatectomy proving necessary in some cases [3, 5]. However there is still little clear information about the length of their natural history of IPMN and the time scale for progression of dysplasia to cancer.

In May 1981, a 58- year-old male was admitted with a history of severe recurrent attacks of central abdominal pain radiating to both hypocondria, occasionally associated with vomiting. He used to be a heavy smoker and admitted to a moderate alcohol consumption. He was treated conservatively. In 1987 following a severe attack a CT scan showed an enlarged pancreatic head containing multiple small cysts. An ERCP showed dilated main and secondary pancreatic ducts and the presence of a contrast filled cyst in communication with the main duct. A diagnosis of pancreatic pseudocyst in recurrent chronic pancreatitis was made and pseudocyst-jejunal anastomosis was performed. He remained well until 1998 when he was readmitted with a new episode of pain and a CT scan showing a 7 cm cystic mass in the pancreatic head (Figure 1). All blood results including tumor markers were normal apart from mild glucose intolerance. His symptoms improved spontaneously and the patient selfdischarged before completing his investigations. In 2001 following another episode of pain he was readmitted to another hospital were he underwent percutaneous drainage of the pancreatic cyst before transfer to our institute. The drain was discharging mucinous material rich with amylase (42,000 IU/L). A fistulogram documented the patency of the pancreaticojejunal anastomosis. MRI and CT (Figure 2) scan showed cystic dilatation of the main pancreatic duct; features compatible with a diagnosis of IPMN of the main pancreatic duct. 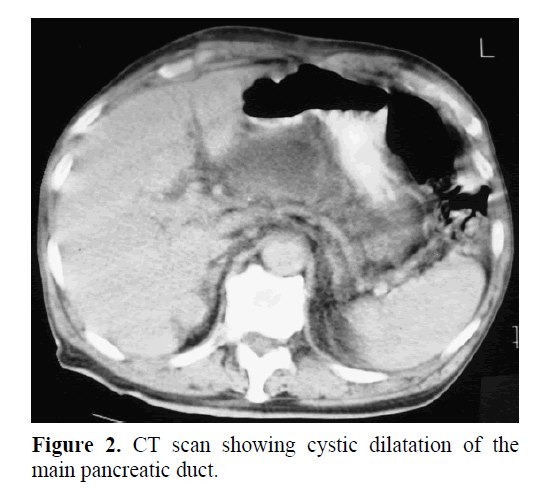 He underwent laparotomy where unfortunately the presence of infiltration of the superior mesenteric vein was observed therefore a repeat palliative cystojejunostomy was performed using the same jejunal loop as the previous anastomosis but draining a more dependant part of the cyst.

The biopsy of the irregular friable soft tissue of the cystic wall (Figure 3) confirms the presence of at least moderate dysplasia, compatible with a diagnosis of borderline intraductal papillary mucinous neoplasia (Figures 4, 5). 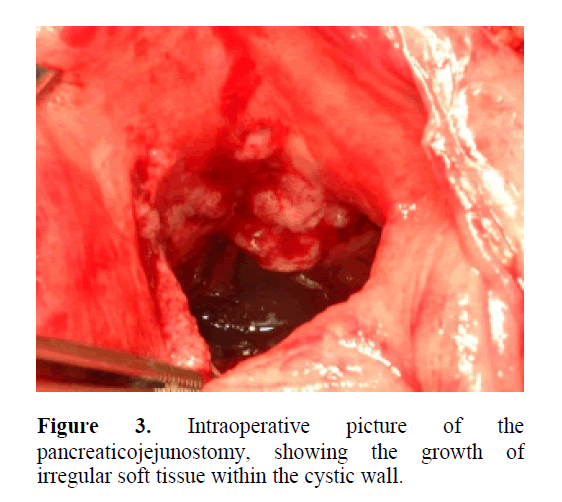 Figure 3. Intraoperative picture of the pancreaticojejunostomy, showing the growth of irregular soft tissue within the cystic wall. 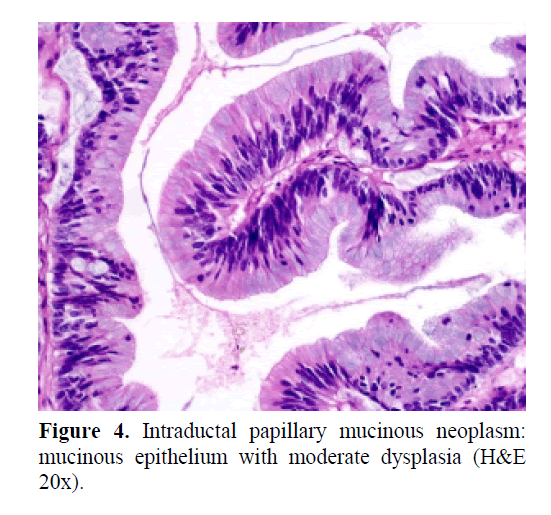 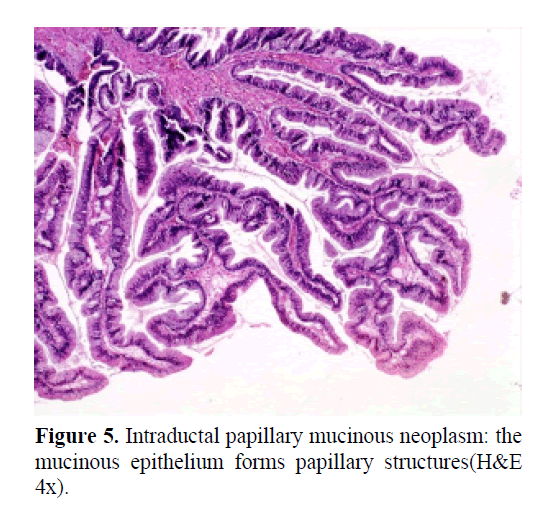 The post-operative course was complicated with anastomotic leak and persistence of an external pancreatic fistula, associated with sepsis which responded to appropriate antibiotic treatment. Two months after discharge he was readmitted with further sepsis and new onset insulin dependent diabetes mellitus. Despite aggressive treatment the patient died 21 years after the first presentation from multi organ failure secondary to sepsis.

In the last decade many authors have described the clinical, radiological and histopathological picture of IPMNs [5, 9]. However the natural history of this disease remains unclear even if recent papers report a time of progression ranging from 5.5 to 6.9 years [6, 10]. At the time of the first presentation of this patient in 1981 IPMNs were not yet reported, therefore it is interesting to critically reassess the demographic, clinical, laboratory and radiological characteristics of this case.

High alcohol intake may represent a predictive factor for malignant IPMNs [5], although the evidence is conflicting [9]. This patient’s clinical presentation suggests possible pancreatic pathology but does not give a more specific diagnosis. It is likely that in IPMNs, mucin blocks the pancreatic duct causing a picture of obstructive pancreatitis [12].

Until the introduction of MRCP the diagnosis depended on ERCP which could evaluate the papilla, the presence of mucinous discharge and dilatation of the pancreatic ducts. However ERCP may convey a false image of stenosis compatible more with chronic pancreatitis rather than with ductectasia and may miss IPMNs of the branch ducts [12]. At present the only treatment is radical surgical resection. Frozen section of the resection margin is essential to perform during the operation as this determines the extent of the resection up to total pancreatectomy [9].

In this case report it is clear how the absence of knowledge of this disease led to a wrong diagnosis. The palliative by pass did however control the patient’s symptoms for more than 20 years. However this may suggest that in symptomatic patients where radical treatment is not possible either due to vascular involvement or to high co-morbidity a palliative pancreatic by-pass may allow control of symptoms for a long period.

Although it is not conclusive, the biopsy in this case showed only a moderate grade of dysplasia and the patient subsequently died from sepsis and not from disease progression. The limited histology available does not allow us to know the full natural history of the disease in this particular case; however it does highlight some of the areas of debate in our understanding of this condition. Further similar cases may help us to identify where IPMN lies in biological relationship to chronic pancreatitis and ductal adenocarcinoma, this knowledge may in turn help us to reduce the risk of developing pancreatic ductal adenocarcinoma in patients with chronic pancreatitis. This case raises the question are we witnessing real evolution from chronic pancreatitis to ductal carcinoma or a 20 year long natural history of IPMN?