Pancreato-duodenectomy (PD) is the procedure of choice for periampullary and pancreatic head cancers. PD involves three anastomoses pancreatic, biliary and gastric/duodenal, of which the pancreatic anastomosis is the most likely to leak and result in complications viz. collection, abscess and erosion into a vascular e.g. gastro-duodenal artery (GDA) stump, causing catastrophic intra-abdominal bleed occurring usually during the second week after operation.

Omentum has been used to protect various anastomoses. We had earlier reported an initial experience of 25 cases with the use of an omental flap to protect the pancreatico-jejunostomy (PJ) in PD [1]. We now report a much larger experience of 132 cases.

PJ leak was defined according to the International Study Group for Pancreatic Fistula (ISGPF) classification as any amount of fluid in an intraoperatively placed drain (or a subsequently placed percutaneous drain) with an amylase level greater than three times the upper normal serum amylase value.

The demographic characteristics and preoperative parameters (hemoglobin and serum albumin) were similar in two groups though patients in the omental flap group had a lower serum bilirubin as compared to the no omental flap group (Table 1). 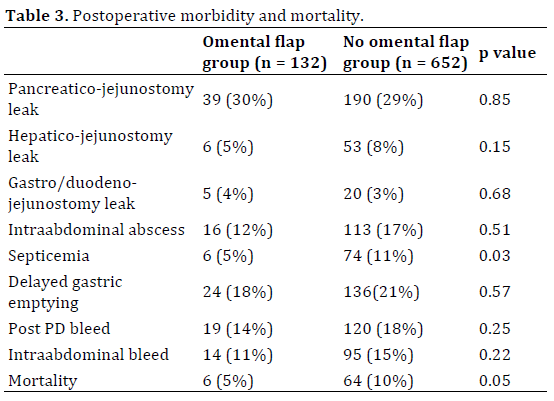 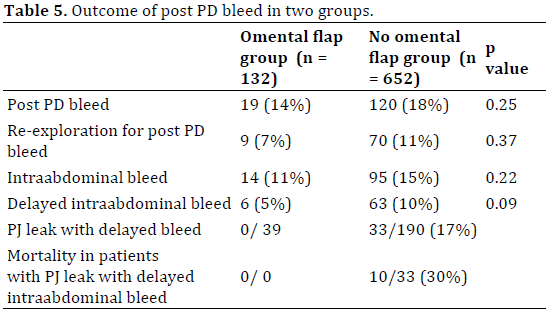 PD is one of the most major surgical procedures performed for hepato-biliary-pancreatic diseases. While mortality has been brought down to less than 5%, morbidity still remains high [2]. PJ leak is the most morbid complication of PD. It is not the leak itself but its consequences viz. collection, infection of the collection leading to abscess and erosion of the abscess into stumps of ligated vessels, especially GDA, and adjacent vessels viz. hepatic and superior mesenteric artery and portal and superior mesenteric veins which are exposed and skeletonized during resection, leading to rupture, blow out and pseudo-aneurysm presenting as delayed intra-abdominal bleed which, if not controlled in time, can be life threatening [3]. If the vascular stumps and exposed vessels can be isolated from the collection/ abscess forming as a result of the PJ leak, the potentially fatal delayed intra-abdominal bleed can be prevented even if PJ leak occurs.

The risk factors for PJ leak include pancreatic texture (soft glands are more likely to leak than firm glands) and pancreatic duct diameter (higher leak rates with undilated than dilated ducts) [4]. Several methods have been described to reduce the risk of PJ leak e.g. use of somatostatin or its analogues [5], use of pancreatic stents [6], use of tissue glue [7] and various techniques of anastomosis [8]. None of these is, however, expected to reduce the risk of secondary delayed intra-abdominal bleed as a consequence of PJ leak.

Omentum adheres to injured and inflamed tissues and promotes revascularization and angiogenesis; it also promotes activation of prothrombin [9].

We used a pedicled vascularized omental flap to separate the vascular stumps and exposed vessels from the PJ anastomosis in 132 patients – none of the patients had a delayed intra-abdominal bleed due to PJ leak and none of the deaths was attributed to delayed intra-abdominal bleed due to PJ leak. One patient in the omental flap group who required reexploration and died because of SMV bleed did not have a PJ leak; it is postulated that the SMV wall sloughed probably because of excessive and inappropriate use of an energy device close to the vessel wall.

We had hypothesized [1] that the use of an omental flap will reduce the risk of PJ leak also but it does not seem to be so as our leak rates were high. This is probably because majority of our PDs were performed for periampullary cancers with soft pancreas and undilated main pancreatic duct (rather than for cancer of the head of pancreas or chronic pancreatitis with firm pancreas and dilated main pancreatic duct). Another reason could be that ours is an academic unit which has a training program for fellowship in surgical gastroenterology – the PDs were performed by consultants in various grades as well as by the fellows in training.

In a large experience with 132 cases, we found a vascularized omental flap wrapped around the PJ to protect the adjacent GDA stump from the ill effects of a PJ leak and prevent the catastrophic delayed intra-abdominal bleed. Creation of an omental flap is simple; we recommend it to be used in all patients undergoing PD.

The authors declare that there are no conflicts of interest.